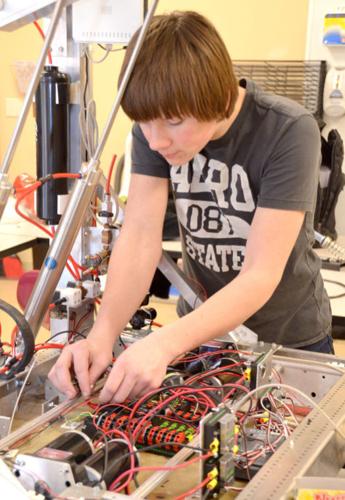 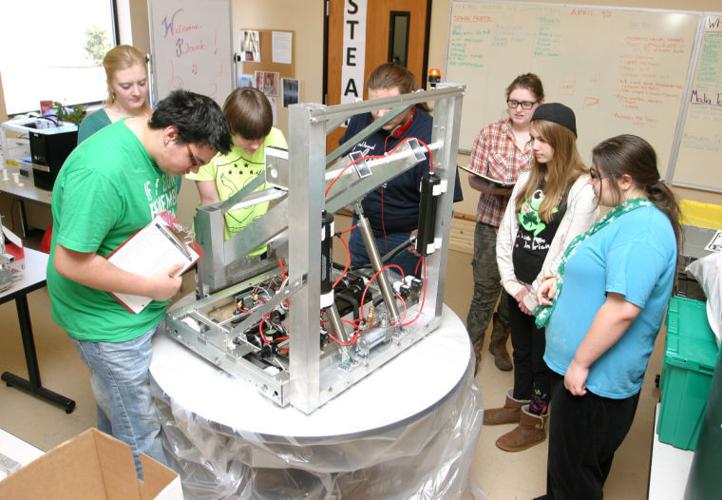 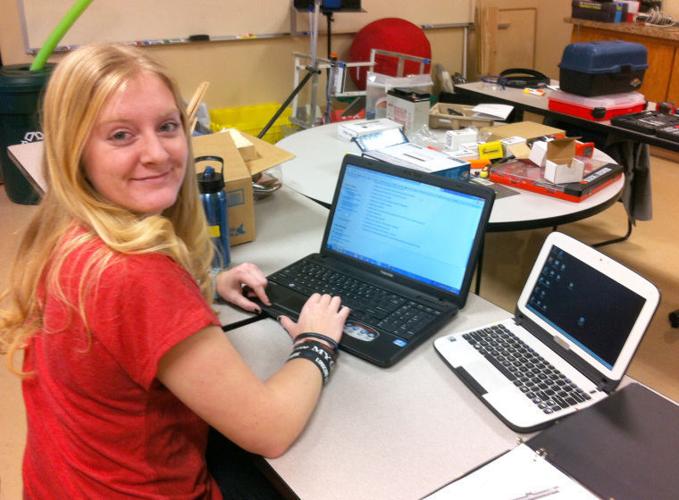 Two weeks from now, nine New Century Academy students will put three months of work to the test when they compete in the U.S. FIRST Robotics Competition April 2-4, at the University of Minnesota campus in Minneapolis.

Since its completion Feb. 17, the New Century team’s robot has been under wraps in quarantine. Competition rules prohibit working on it or practicing its operation between that date and the competition.

This will mark the school’s second year of participating in the increasingly popular test of engineering, programming, building and marketing skills for high school students. This year’s squad, known as Molten Steel, is about half the size of the 2014 team. But returnees believe the smaller size has worked to their advantage by keeping everyone busy and more focused during the six-week design and construction of the robot.

“It is a lot easier because we have the same people show up every week and they know what is expected of them,” said Mckenzie Ebert, who has served as team captain both years. As such, she monitors the efforts of the rest of the team, helps define their tasks and schedule, and makes sure they stay on task.

She also has another key duty.

“I’m the only programmer on the team, because our two programmers from last year moved,” Ebert said. “I had to learn it in about a week’s time.”

Her father, Tony Ebert, production manager at Miller Manufacturing in Glencoe, got involved as a team mentor. When the coach moved to Florida, however, Ebert agreed to fill in as coach. His manufacturing and mechanical background has helped. He and the team studied a thick game manual that came with the robot kit. It details the types of maneuvers the robot will be expected to perform.

While work on this year’s competition robot only began in January, the team has actually been working since this past summer. It displayed the 2013-2014 robot in a couple of parades to promote the competition. Team members spent the first semester studying and assessing the various choices of drive trains.

“They’ve been meeting all school year and participated in two events the first semester in the Twin Cities,” Tony Ebert said. “The build season began Jan. 3 and they met for two hours after school every Tuesday and Thursday. The robot build team also met every Saturday until Lock-up Day Feb. 17.”

Two-year veteran Andrew Rettig was supervisor of this year’s build team. It is responsible for the design, build specifications and fabrication of the robot. He was assisted by another two-year member, Jason Strother, and two newcomers — Ben Muckenhirn and Mason Hudson. Mckenzie Ebert, as programmer, also chipped in on the construction.

“The kit is just miscellaneous parts,” Rettig said. “There are three types of chassis — long, wide and square. We picked the wide chassis for its stability and used a tank-style drive. We have to work closely with the programming effort.” The wide chassis was used the first year, too, so the team has used the old robot for practice, but is now in the process of dismantling it.

“It is not just building a robot,” Coach Ebert said. “You run a business, do media things, and promote it. The media team works on promotional materials to hand out at the competition.”

Because New Century doesn’t have any corporate sponsors beyond Boston Scientific, a FIRST Robotic sponsor that provides the robot kit, Molten Steel’s media team also has taken on fundraising, media team supervisor Jordan Dobbs said. The eighth-grader is another two-year veteran of the robotics competition. Assisting her are additional two-year members Emily Ehler and Chelsey Nurcutt.

“We’ve put on movie nights once a month in the gym and earned $101 the first time,” Dobbs said. “We are working on T-shirts for the team to wear at the competition and update a website and Facebook pages.”

Since going into the lock-down phase, the team has backed off to just meeting after school on Tuesdays. They were busy this week determining what tools to bring for their 10-by-10 “pit” area at the Minneapolis competition.

This year’s robot will have to perform some janitorial-like tasks called Recycle Rush, including stacking recycle totes and waste cans, and cleaning the floor of litter.

During competition, New Century’s Molten Steel will be teamed in an alliance with two other teams. The alliances will be shifted throughout the competition, so one-time allies may work against each other later.

“FIRST Robotics has an amazing feel to it,” she said. “It is a like a football game with the amount of cheering that goes on. It is good to be competitive, but working together between teams.”