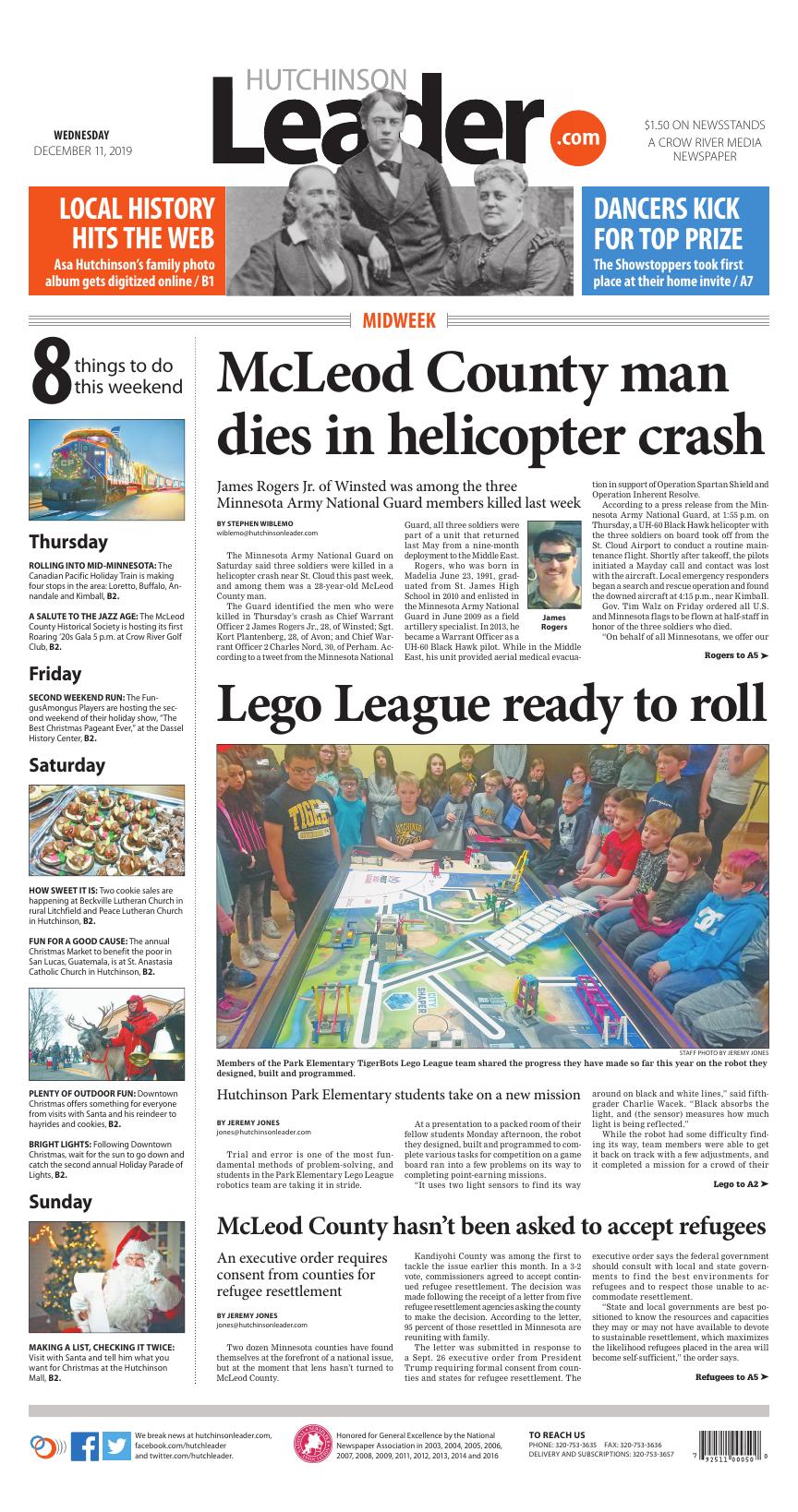 The Minnesota Army National Guard on Saturday said three soldiers were killed in a helicopter crash near St. Cloud this past week, and among them was a 28-year-old McLeod County man.

The Guard identified the men who were killed in Thursday’s crash as Chief Warrant Officer 2 James Rogers Jr., 28, of Winsted; Sgt. Kort Plantenberg, 28, of Avon; and Chief Warrant Officer 2 Charles Nord, 30, of Perham. According to a tweet from the Minnesota National Guard, all three soldiers were part of a unit that returned last May from a nine-month deployment to the Middle East.

Rogers, who was born in Madelia June 23, 1991, graduated from St. James High School in 2010 and enlisted in the Minnesota Army National Guard in June 2009 as a field artillery specialist. In 2013, he became a Warrant Officer as a UH-60 Black Hawk pilot. While in the Middle East, his unit provided aerial medical evacuation in support of Operation Spartan Shield and Operation Inherent Resolve.

According to a press release from the Minnesota Army National Guard, at 1:55 p.m. on Thursday, a UH-60 Black Hawk helicopter with the three soldiers on board took off from the St. Cloud Airport to conduct a routine maintenance flight. Shortly after takeoff, the pilots initiated a Mayday call and contact was lost with the aircraft. Local emergency responders began a search and rescue operation and found the downed aircraft at 4:15 p.m., near Kimball.

Gov. Tim Walz on Friday ordered all U.S. and Minnesota flags to be flown at half-staff in honor of the three soldiers who died.

“On behalf of all Minnesotans, we offer our deepest sympathies to the families of these warriors,” Walz said. “They paid the ultimate price and service to Minnesota and to the United States of America. Words will never ease the pain of this tragic loss and the state of Minnesota is forever in the debt of these warriors.”

District 18B Rep. Glenn Gruenhagen also released a statement on the deaths of the three soldiers.

“We are all eternally grateful for the service and sacrifice of Chief Warrant Officer Rogers,” he said. “I know Minnesotans will lift up in prayer the family members and loved ones of our fallen heroes, and do what we can to support them during this difficult time.”

Members of the Park Elementary TigerBots Lego League team shared the progress they have made so far this year on the robot they designed, built and programmed.

Trial and error is one of the most fundamental methods of problem-solving, and students in the Park Elementary Lego League robotics team are taking it in stride.

At a presentation to a packed room of their fellow students Monday afternoon, the robot they designed, built and programmed to complete various tasks for competition on a game board ran into a few problems on its way to completing point-earning missions.

"It uses two light sensors to find its way around on black and white lines," said fifth-grader Charlie Wacek. "Black absorbs the light, and (the sensor) measures how much light is being reflected."

While the robot had some difficulty finding its way, team members were able to get it back on track with a few adjustments, and it completed a mission for a crowd of their peers. And then, once the presentation was over, school was out and they set to work to better prepare the robot for its next run.

"It's all trial and error," Wacek said. "It takes a lot of time to figure out a mission."

About 10 missions are spread around the official board, themed this year as CityShaper. The TigerBots will attempt to tackle about half within their time limit. Strategizing the best approach and how to earn the most points with a single robot design and a few attachments is part of the challenge. Their first competition with other schools is this Saturday in St. Paul. The team has been at it since September.

"One mission is going really (well)," said fourth-grader Owen Scott. "And one we have done once or twice. There is a mission with a crane we are working to perfect. Sometimes it doesn't go far enough."

The team of 10 takes care of its own design and computer programming, but the Lego League requires teams to take on more challenges. Each year, the elementary students are asked to make a presentation about a service project or scientific idea they come up with.

Last year, the theme was space and orbit, so students came up with an idea to help astronauts get a good night's sleep in space by using a pressurized sleeping bag to replicate the feeling of a blanket's comfort under gravity. The concept earned recognition and high praise from judges. This year, with the theme of CityShaper, the TigerBots have taken on a more local issue.

"We are figuring out problems in public spaces in the community," Scott said.

"(Our presentation) is about how to improve learning environments in the school," Wacek said. "We mainly focused on Park Elementary, but we are thinking of branching out."

After researching the issue, the team came up with a number of issues to target.

"The colors are too bright," Wacek said. "There is background sound. And it gets hot, so you need (air conditioning). That makes noise. You need furniture that is comfortable and modular. The last is lighting. It needs to be shared wavelength or spotlighting that will dim or brighten in response to daylight."

The team's presentation was built into a skit based on the television show "Shark Tank."

"We have two people that are the TigerShark Tank judges," Wacek said. "We present all of our ideas in pairs and ... in the end they choose all of them because they are all important to a learning environment."

"It's all trial and error. It takes a lot of time to figure out a mission."

With the Lego League theme of CityShaper, TigerBots innovation project takes a look at something close to the daily lives of its members.

"Teams were challenged to identify a problem with a building or public space in their community, design a solution, and share their solutions with others," said coach Jason Durheim. "The TigerBots looked at many options around Hutchinson, but kept coming back to concerns they have about the Park Elementary building."

Students learned about the school's bond referendum to update elementary buildings, and took an interest in the proposed solutions.

"The central theme of their concerns came down to creating a positive learning environment for students," Durheim said. "They researched about six components, communicated with Principal Dan Olberg, Superintendent Daron VanderHeiden, interior designer Mary Christensen, and Dr. Victor de Andrade who has done extensive research around audiology and learning."

The group has been invited by VanderHeiden to be a focus group as the school plans upcoming renovations.

Two dozen Minnesota counties have found themselves at the forefront of a national issue, but at the moment that lens hasn't turned to McLeod County.

Kandiyohi County was among the first to tackle the issue earlier this month. In a 3-2 vote, commissioners agreed to accept continued refugee resettlement. The decision was made following the receipt of a letter from five refugee resettlement agencies asking the county to make the decision. According to the letter, 95 percent of those resettled in Minnesota are reuniting with family.

"State and local governments are best positioned to know the resources and capacities they may or may not have available to devote to sustainable resettlement, which maximizes the likelihood refugees placed in the area will become self-sufficient," the order says.

The president has proposed a cap of 18,000 refugees for 2020, a decline of 40 percent from the previous year and a historic low. According to the Minnesota Department of Human Services, 70 percent of refugees are women and children. In 2018, 663 refugees were resettled in Minnesota. In 2019, another 775 have been resettled here. The majority this year are from Burma (362), followed by Ukraine (69) and Somalia (67).

Kandiyohi County received the letter requesting it accept refugees on Nov. 27. It's County Board was asked to make a decision by Dec. 20.

"None of the resettlement agencies have reached out to us for placement," said McLeod County Administrator Sheila Murphy, adding that the board would likely address the issue if a request is submitted in time.

Since 2015, Minnesota has received 8,128 refugees, according to the Department of Human Services. Here is a breakdown of that number by county. These numbers are based on federal fiscal years (October through September), and any county not listed did not receive refugees in the past five years.

Katie Bauer, a public information officer with the DHS, said counties must consent before Jan. 31, which is the deadline for resettlement agencies to submit placement plans to the U.S. Department of State. However, Jackie Nelson, senior manager for marketing and public relations with Lutheran Social Services, one of Minnesota's resettlement agencies, said that for her agency's planning purposes, the deadline is Dec. 25. That will allow a resettlement plan to be prepared by Jan. 21.

According to the DHS, no primary refugees have been resettled in McLeod County in the past five years.

Counties that do not signal their consent will not be targeted for resettlement, and agencies that provide support services — such as Minnesota Council of Churches, Arrive Ministries, Catholic Charities, International Institute of Minnesota, Lutheran Social Services of Minnesota — will not operate resettlement services in those counties. Refugees may move elsewhere following resettlement. Consent decisions take effect June 1.

"They're still trying to determine implementation moving forward," Murphy said, following a conference session hosted by DHS. "(We are) probably going to see them seeking consent on an annual basis. Since there is no urgency for counties not being contacted by the nonprofit agencies, it sounds like a lot of the counties are not voting at this time." 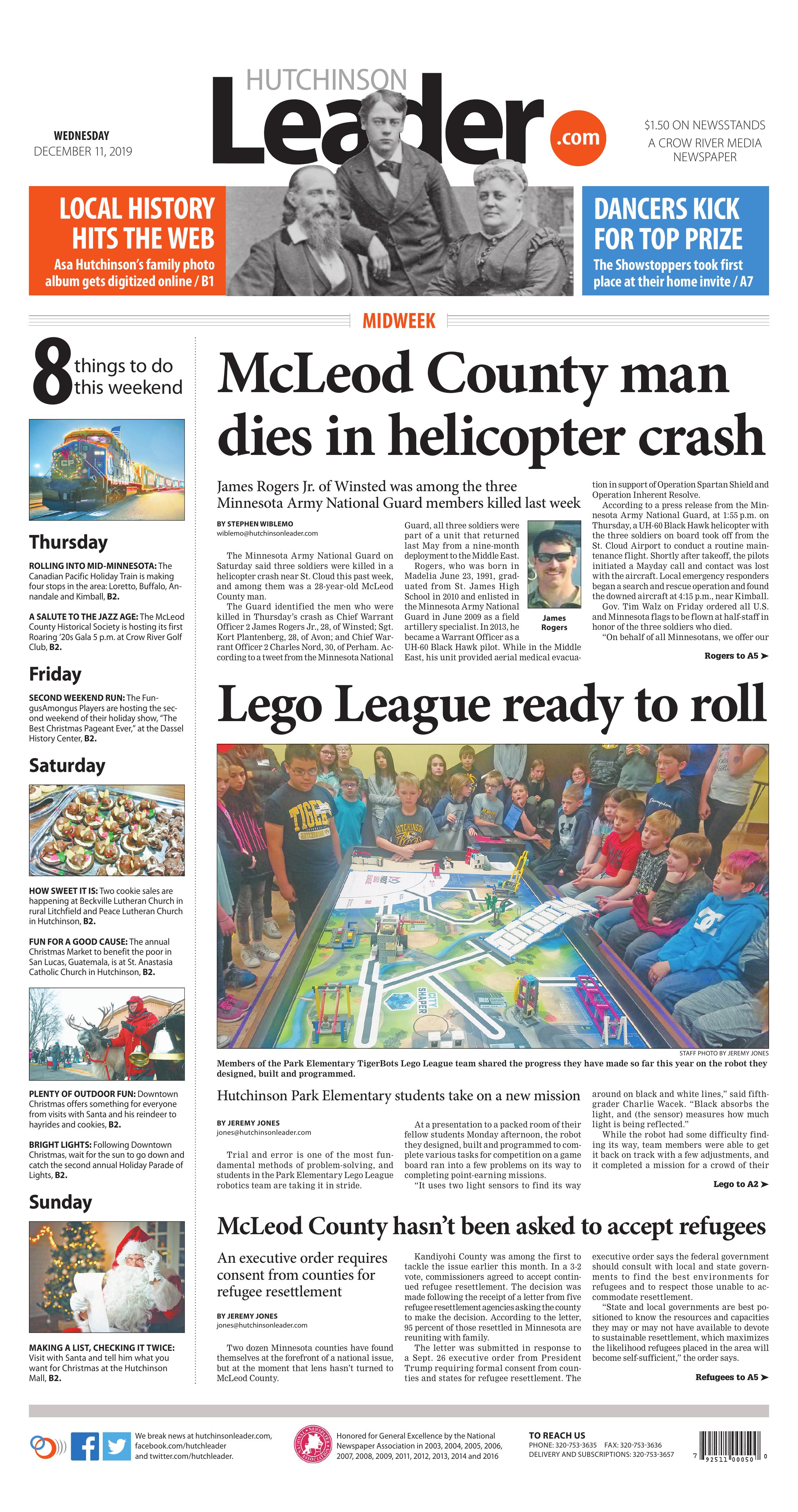