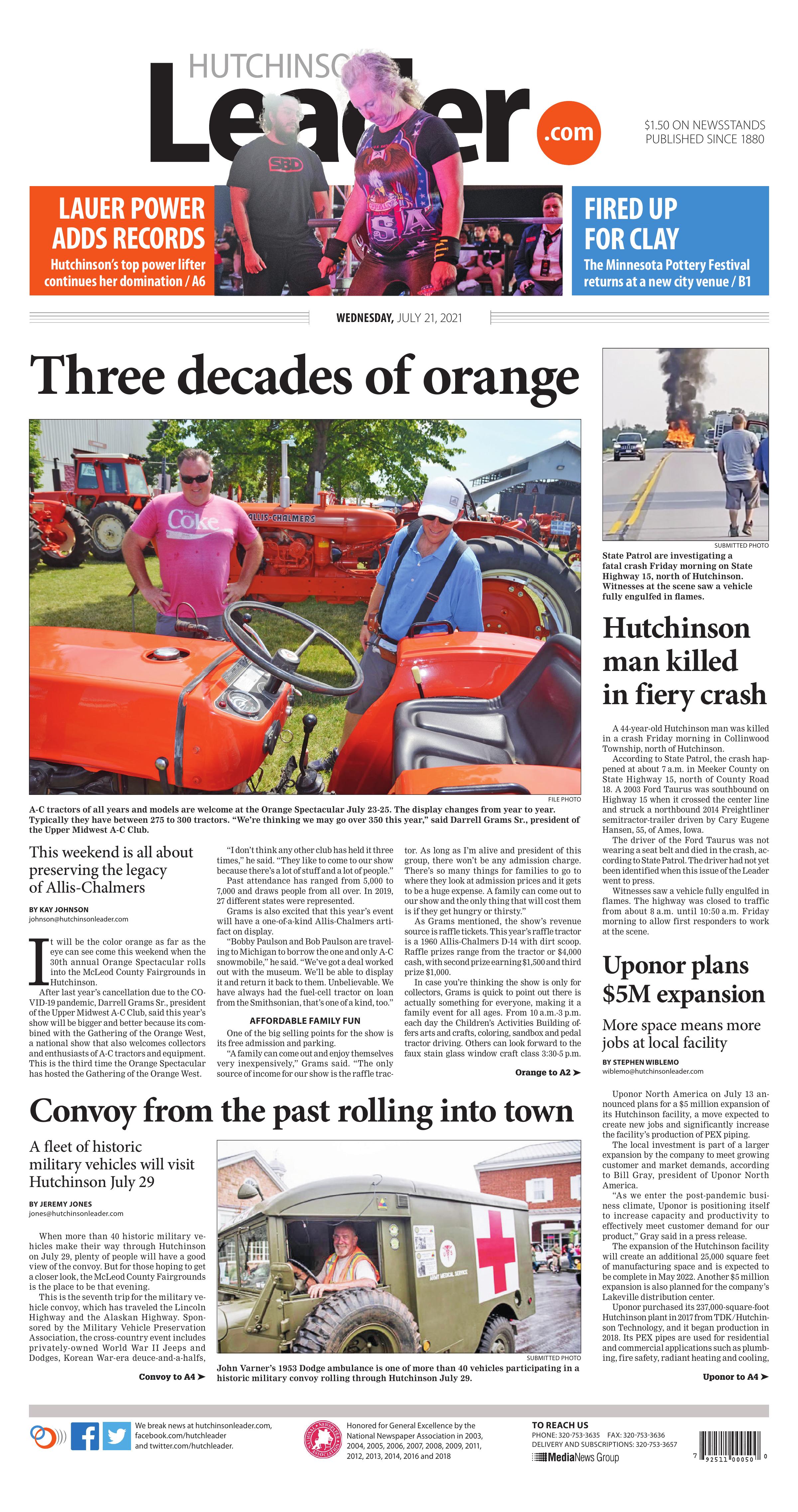 It will be the color orange as far as the eye can see come this weekend when the 30th annual Orange Spectacular rolls into the McLeod County Fairgrounds in Hutchinson.

“I don't think any other club has held it three times,” he said. “They like to come to our show because there's a lot of stuff and a lot of people.”

Grams is also excited that this year's event will have a one-of-a-kind Allis-Chalmers artifact on display.

"Bobby Paulson and Bob Paulson are traveling to Michigan to borrow the one and only A-C snowmobile," he said. "We've got a deal worked out with the museum. We'll be able to display it and return it back to them. Unbelievable. We have always had the fuel-cell tractor on loan from the Smithsonian, that's one of a kind, too."

One of the big selling points for the show is its free admission and parking.

"A family can come out and enjoy themselves very inexpensively," Grams said. "The only source of income for our show is the raffle tractor. As long as I'm alive and president of this group, there won't be any admission charge. There's so many things for families to go to where they look at admission prices and it gets to be a huge expense. A family can come out to our show and the only thing that will cost them is if they get hungry or thirsty."

As Grams mentioned, the show's revenue source is raffle tickets. This year's raffle tractor is a 1960 Allis-Chalmers D-14 with dirt scoop. Raffle prizes range from the tractor or $4,000 cash, with second prize earning $1,500 and third prize $1,000.

In case you're thinking the show is only for collectors, Grams is quick to point out there is actually something for everyone, making it a family event for all ages. From 10 a.m.-3 p.m. each day the Children's Activities Building offers arts and crafts, coloring, sandbox and pedal tractor driving. Others can look forward to the faux stain glass window craft class 3:30-5 p.m. Friday; decorative basket holder craft class 3:30-5 p.m. Saturday and the windsock craft class for adults and children 11 a.m. to noon Sunday. Plus there's the swap meet, free bus rides to the McLeod County Historical Museum to see the A-C fuel-cell tractor, field demonstrations, toy show, tractor parade, live music, workshops, seminars, exhibits, 300 tractors on display plus a whole lot more.

For those who like to relive their Orange Spectacular experience after the fact, Brian Baxter, producer and host of the "Classic Tractor Fever" RFD TV series, will be at this year's show shooting a CD.

"There will be ways to order it," Grams said. "When it's edited and put together they can get it."

Another big selling point for the Orange Spectacular is the location — the McLeod County Fairgrounds and the city of Hutchinson. Grams is proud of the working relationships the club has developed.

“They need to know we get a lot of comments from people who come here how neat and clean the city is,” Grams said. “When they drive around, they really compliment the city of Hutchinson. I think the city needs to know that."

Grams gave a shout out to the Hutchinson Police, Hutchinson Area Chamber of Commerce, Mayor Gary Forcier and Randy Starke at the Fairgrounds.

"Everybody really chips in to make this as much of a show as they can," he said. "We hope people coming in leave some money behind. It's good for the economy of the city, too. There's not a hotel available in Hutchinson, Glencoe or Litchfield. We have a good working relationship. The city has been great to us. It brings people back time and time again.”

While the show is about celebrating the Allis-Chalmers name and legacy, it's about more than that, too. Grams said, It's almost like a family reunion nationwide."

"We have people who come every year from great distances," he said. "They always tell me, they come the first couple times to see all the equipment and after that they come to see the people."

Admission and parking for the event are free. For more information and a complete schedule of events, visit orangespectacular.com.

When more than 40 historic military vehicles make their way through Hutchinson on July 29, plenty of people will have a good view of the convoy. But for those hoping to get a closer look, the McLeod County Fairgrounds is the place to be that evening.

This is the seventh trip for the military vehicle convoy, which has traveled the Lincoln Highway and the Alaskan Highway. Sponsored by the Military Vehicle Preservation Association, the cross-country event includes privately-owned World War II Jeeps and Dodges, Korean War-era deuce-and-a-halfs, 5- and 10-ton Oshkosh and cargo haulers, among many others from the late 1950s through today.

The convoy is traveling and celebrating the historic Yellowstone Trail National Highway route, which was established in 1912 with the slogan "A Good Road from Plymouth Rock to Puget Sound." The route was originally marked with yellow bands painted on trees and telephone poles. In 1915, a timed relay race from Chicago to Seattle used the route. The military vehicle convoy will follow the route from Aberdeen, South Dakota, to Conneaut, Ohio.

"I tell people you really don't know the United States until you drive the back roads at 30 mph," said John Varner, convoy planning team member.

The convoy often uses less traveled roads due to low speeds meant to help preserve the historic vehicles. For some, the site of the military vehicles constitutes the largest Fourth of July parade they've ever seen.

The month-long journey, which covers 120-150 miles each day, will enter Minnesota at Ortonville and stop in towns such as Montevideo and Olivia along the way. When it reaches Hutchinson at about 4 p.m. Thursday, the convoy will park for a break and take a guided tour of town, escorted by police. The tour is expected to drive by several senior living residences, on Second Avenue past South Park and Sherwood Street past Elks Park, then on Jefferson Street from Second Avenue Southeast to Century Avenue until finishing back at the McLeod County Fairgrounds, where the vehicles will park and locals are invited to visit from about 5-9 p.m.

Stops like these become opportunities for association members to educate the public about the importance of the vehicles during their time in service, and their history.

Varner will be there in his 1953 Dodge ambulance.

"If you ever saw the TV show MASH, there is a good view of that ambulance coming up the hill in the opening credits," he said.

He's been driving the ambulance since 2016 but has been in the Military Vehicle Preservation Association since the 1990s, following four years in the Army in the 1970s.

"I was around these vehicles," he said. "And Americans collect old cars, whether they're old Stingrays or old ambulances."

The seven cross-country convoys have been a way to make friends, build bonds and have fun.

"You hear the birds singing, the children laughing in the yards waving at you and running toward you," Varner said. "It's amazing. The country really isn't defined by big cities, it's defined by the Hutchinsons. We've had a lot of great experiences."

State Patrol are investigating a fatal crash Friday morning on State Highway 15, north of Hutchinson. Witnesses at the scene saw a vehicle fully engulfed in flames.

A 44-year-old Hutchinson man was killed in a crash Friday morning in Collinwood Township, north of Hutchinson.

According to State Patrol, the crash happened at about 7 a.m. in Meeker County on State Highway 15, north of County Road 18. A 2003 Ford Taurus was southbound on Highway 15 when it crossed the center line and struck a northbound 2014 Freightliner semitractor-trailer driven by Cary Eugene Hansen, 55, of Ames, Iowa.

The driver of the Ford Taurus was not wearing a seat belt and died in the crash, according to State Patrol. The driver had not yet been identified when this issue of the Leader went to press.

Witnesses saw a vehicle fully engulfed in flames. The highway was closed to traffic from about 8 a.m. until 10:50 a.m. Friday morning to allow first responders to work at the scene.

Uponor North America announced a $5 million expansion of its Hutchinson facility that will add new jobs and 25,000 square feet of manufacturing space.

Uponor North America on July 13 announced plans for a $5 million expansion of its Hutchinson facility, a move expected to create new jobs and significantly increase the facility’s production of PEX piping.

The local investment is part of a larger expansion by the company to meet growing customer and market demands, according to Bill Gray, president of Uponor North America.

“As we enter the post-pandemic business climate, Uponor is positioning itself to increase capacity and productivity to effectively meet customer demand for our product,” Gray said in a press release.

The expansion of the Hutchinson facility will create an additional 25,000 square feet of manufacturing space and is expected to be complete in May 2022. Another $5 million expansion is also planned for the company’s Lakeville distribution center.

Uponor purchased its 237,000-square-foot Hutchinson plant in 2017 from TDK/Hutchinson Technology, and it began production in 2018. Its PEX pipes are used for residential and commercial applications such as plumbing, fire safety, radiant heating and cooling, hydronic piping and pre-insulated piping systems.

“Our demand is up dramatically, like many building supply companies,” said Jon Sillerud, vice president of operations. “We all read stories of what’s happening in the residential construction business and the rampant shortages across the spectrum. We’re doing better than most every company out there, but we have seen a significant, double-digit increase in the demand for our product.”

The Hutchinson facility services Uponor’s North American market, with about 90% of its piping used in the U.S. and the other 10% in Canada.

Helping to oversee the expansion will be the Hutchinson facility’s newly named site manager, John Sommers.

Sillerud confirmed that the expansion will also lead to new jobs, but added that the facility currently has 18 openings it is looking to fill.

“We will be expanding that further once this renovation of the space is completed,” Sillerud said. “It will be a range of positions. It will be extrusion operators, that’ll be the primary focus, but there will be other positions as well.”