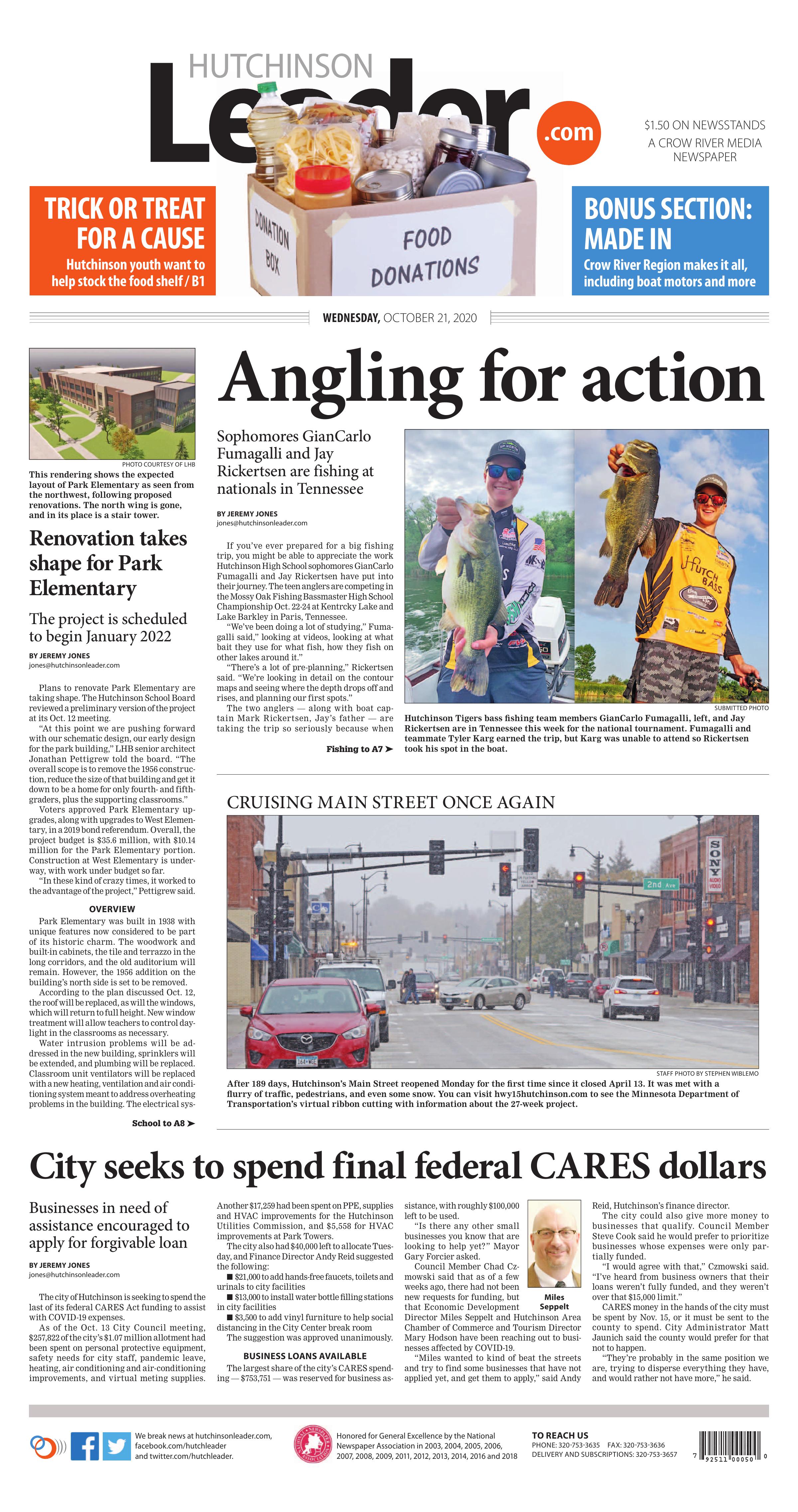 Hutchinson Tigers bass fishing team members GianCarlo Fumagalli, left, and Jay Rickertsen are in Tennessee this week for the national tournament. Fumagalli and teammate Tyler Karg earned the trip, but Karg was unable to attend so Rickertsen took his spot in the boat.

If you've ever prepared for a big fishing trip, you might be able to appreciate the work Hutchinson High School sophomores GianCarlo Fumagalli and Jay Rickertsen have put into their journey. The teen anglers are competing in the Mossy Oak Fishing Bassmaster High School Championship Oct. 22-24 at Kentrcky Lake and Lake Barkley in Paris, Tennessee.

"We've been doing a lot of studying," Fumagalli said," looking at videos, looking at what bait they use for what fish, how they fish on other lakes around it."

"There's a lot of pre-planning," Rickertsen said. "We're looking in detail on the contour maps and seeing where the depth drops off and rises, and planning our first spots."

The two anglers — along with boat captain Mark Rickertsen, Jay's father — are taking the trip so seriously because when they arrive they'll be representing Hutchinson and the Hutchinson Tigers bass fishing team. The spot was earned by Fumagalli and Tyler Karg in the 2019-20 school year when they ranked high in the conference tournament and then the state tournament on the Le Homme Dieu Chain in Alexandria.

"On the first day we had only 13 pounds, which is a good bag, but we thought we were going to get maybe 50th," Fumagalli said. "An announcer asked how we did, and we thought we did OK. He said if we did another bag like that we're going to nationals."

So the pair — along with boat captain Chad Karg — focused on the next day and did just as the announcer suggested, landing sixth place at the state tournament. The top eight teams were offered a place at the national tournament in Tennessee.

The tournament was originally scheduled for this past summer but shifted to October due to COVID-19. As many as 275 high school teams are expected to compete in the three-day tournament, with all anglers fishing on the first two days, and the top 12 moving on to the third day.

Because Jay and Chad Karg were unable to attend, Fumagalli offered Rickertsen and his father the open positions on his boat. All participate on the Hutchinson Tigers bass fishing team, which tends to launch about 20 boats of anglers in Minnesota tournaments.

Fumagalli and Rickertsen have both been fishing all their lives.

"Pretty much since I could," Fumagalli said.

That led him to sign up for the team following his eighth-grade year.

"I've been fishing since I was a kid, since like real young," Rickertsen said. "I just started tournaments recently."

He's spent a lot of that time fishing with his father.

"And he's been my boat captain for a lot of our tournaments," Rickertsen said. "He's a pretty good boat captain."

Boat captains will play a bigger role in the national tournament than they have in the past. While captains can't fish, they can offer advice and help make decisions in addition to driving the boat. That extra perspective will come in handy as Fumagalli and Rickertsen aim for a high ranking at nationals.

"I want to take it pretty seriously," Rickertsen said. "I'm going to take advantage of this opportunity, try my hardest and see how it goes." 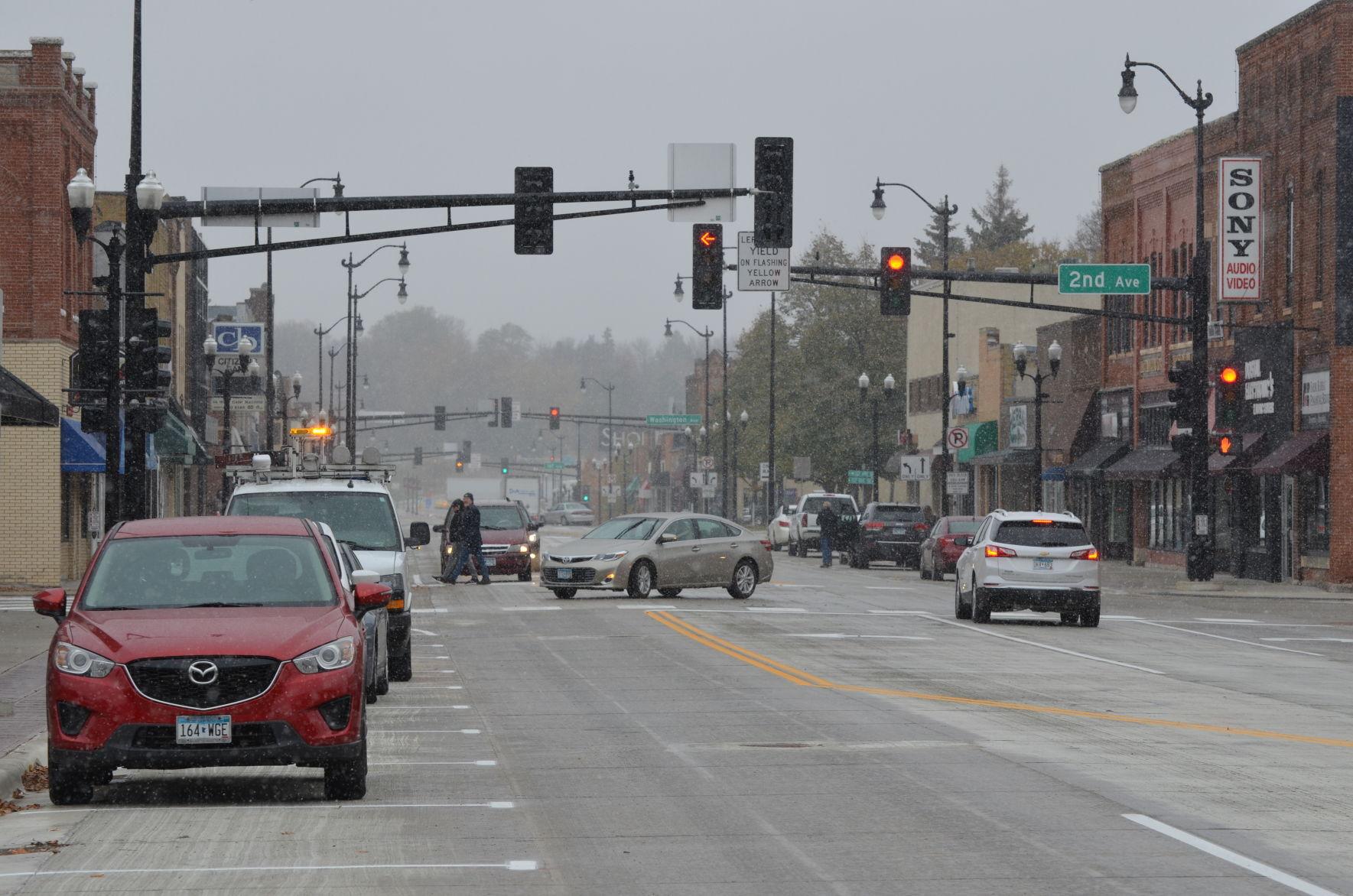 After 189 days, Hutchinson's Main Street reopened Monday for the first time since it closed April 13. It was met with a flurry of traffic, pedestrians, and even some snow. You can visit hwy15hutchinson.com to see the Minnesota Department of Transportation's virtual ribbon cutting with information about the 27-week project.

The city of Hutchinson is seeking to spend the last of its federal CARES Act funding to assist with COVID-19 expenses.

As of the Oct. 13 City Council meeting, $257,822 of the city's $1.07 million allotment had been spent on personal protective equipment, safety needs for city staff, pandemic leave, heating, air conditioning and air-conditioning improvements, and virtual meting supplies. Another $17,259 had been spent on PPE, supplies and HVAC improvements for the Hutchinson Utilities Commission, and $5,558 for HVAC improvements at Park Towers.

The city also had $40,000 left to allocate Tuesday, and Finance Director Andy Reid suggested the following:

The suggestion was approved unanimously.

"Is there any other small businesses you know that are looking to help yet?" Mayor Gary Forcier asked.

Council Member Chad Czmowski said that as of a few weeks ago, there had not been new requests for funding, but that Economic Development Director Miles Seppelt and Hutchinson Area Chamber of Commerce and Tourism Director Mary Hodson have been reaching out to businesses affected by COVID-19.

"Miles wanted to kind of beat the streets and try to find some businesses that have not applied yet, and get them to apply," said Andy Reid, Hutchinson's finance director.

The city could also give more money to businesses that qualify. Council Member Steve Cook said he would prefer to prioritize businesses whose expenses were only partially funded.

"I would agree with that," Czmowski said. "I've heard from business owners that their loans weren't fully funded, and they weren't over that $15,000 limit."

CARES money in the hands of the city must be spent by Nov. 15, or it must be sent to the county to spend. City Administrator Matt Jaunich said the county would prefer for that not to happen.

"They're probably in the same position we are, trying to disperse everything they have, and would rather not have more," he said.

This rendering shows the expected layout of Park Elementary as seen from the northwest, following proposed renovations. The north wing is gone, and in its place is a stair tower.

This image shows the proposed footprint of Park Elementary after the north wing, which runs east to west, is removed and the pavement is adjusted to accommodate space for buses to park off the street on the west side.

The north addition of Park Elementary, seen here on the right, was built in 1956. It will be demolished as part of the conceptual plan for renovations to Hutchinson Public Schools’ preschool to fifth-grade learning spaces.

Plans to renovate Park Elementary are taking shape. The Hutchinson School Board reviewed a preliminary version of the project at its Oct. 12 meeting.

"At this point we are pushing forward with our schematic design, our early design for the park building," LHB senior architect Jonathan Pettigrew told the board. "The overall scope is to remove the 1956 construction, reduce the size of that building and get it down to be a home for only fourth- and fifth-graders, plus the supporting classrooms."

"In these kind of crazy times, it worked to the advantage of the project," Pettigrew said.

Park Elementary was built in 1938 with unique features now considered to be part of its historic charm. The woodwork and built-in cabinets, the tile and terrazzo in the long corridors, and the old auditorium will remain. However, the 1956 addition on the building's north side is set to be removed.

According to the plan discussed Oct. 12, the roof will be replaced, as will the windows, which will return to full height. New window treatment will allow teachers to control daylight in the classrooms as necessary.

Water intrusion problems will be addressed in the new building, sprinklers will be extended, and plumbing will be replaced. Classroom unit ventilators will be replaced with a new heating, ventilation and air conditioning system meant to address overheating problems in the building. The electrical systems will be updated in the historic building, making it easier to add new technology to classrooms.

The north wing added in 1956 extended to the west, toward the area where the school's playground can be seen. With removal of the extension, there will be room to rearrange the paved area in the back, and that play area.

One of the project's main goals is to move bus parking, loading and unloading from the street. The additional space to rearrange the paved area on the building's west side is likely to be used for a seven-bus parking area near Park Elementary's back entrances.

The changes will allow some of the existing paved area to be made green space. Overall, there will be less paved ground, a shift meant to address storm water management issues.

Another notable addition to Park Elementary's planned footprint is the addition of a stair tower on the north end.

Overall goals for Park Elementary's interior include resizing the building to serve fourth and fifth grade, with second and third grade moving to the renovated and expanded West Elementary. Each grade will have a floor of the building, with unique learning areas in the basement. New spaces will be added for small groups.

The basement's north-facing windows will be used to extend natural light deeper into the building than is possible now. Art, music and hands-on technology spaces will share a centralized, illuminated space near the media center.

"This becomes a hub where ... work will be displayed, where creators of the classes in STEAM and makerspace can be exhibited or demonstrated," Pettigrew said.

On the main level, the theater and gym spaces south of the main east-to-west hallway will not see many changes.

"We do expect to replace the windows that used to be in the auditorium, open that back up, and provide shades," Pettigrew said.

Fourth-grade classrooms will be on the first floor, as well as informal and group learning areas. Restrooms will be renovated to be more accessible, and new restrooms for staff and visitors will be added.

Classrooms on the second floor will be arranged similarly to how they are arranged now, with the exception of the removed north wing.

"They are generally nicely sized classrooms, and we're going to work with those layouts as much as we can," Pettigrew said.