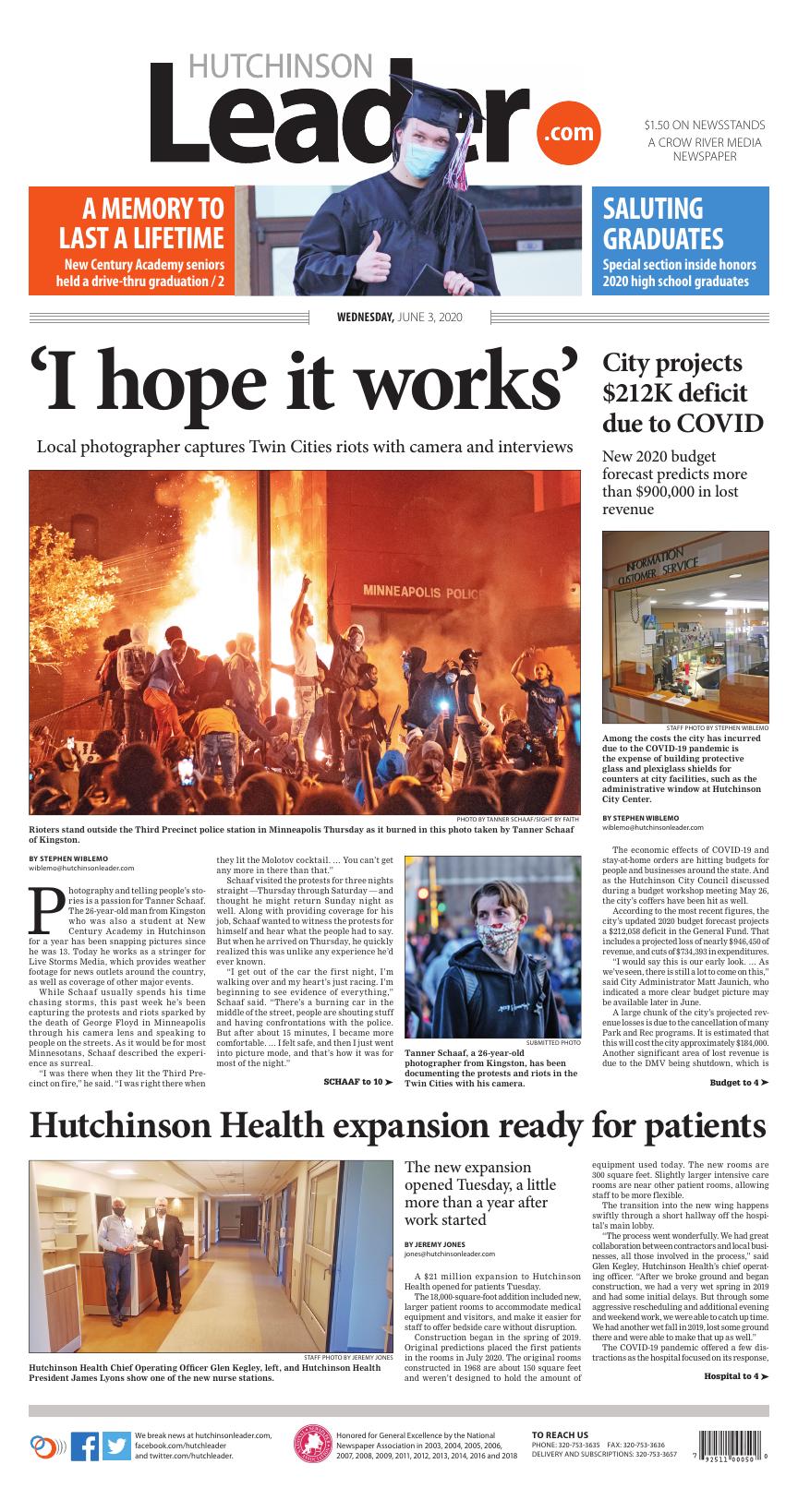 Rioters stand outside the Third Precinct police station in Minneapolis Thursday as it burned in this photo taken by Tanner Schaaf of Kingston.

Photography and telling people’s stories is a passion for Tanner Schaaf. The 26-year-old man from Kingston who was also a student at New Century Academy in Hutchinson for a year has been snapping pictures since he was 13. Today he works as a stringer for Live Storms Media, which provides weather footage for news outlets around the country, as well as coverage of other major events. 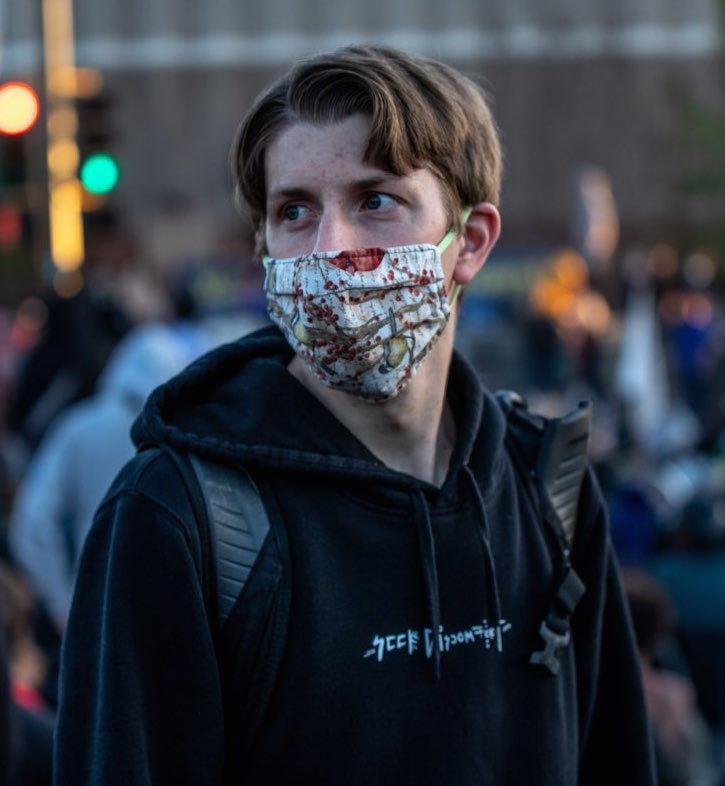 Tanner Schaaf, a 26-year-old photographer from Kingston, has been documenting the protests and riots in the Twin Cities with his camera.

While Schaaf usually spends his time chasing storms, this past week he’s been capturing the protests and riots sparked by the death of George Floyd in Minneapolis through his camera lens and speaking to people on the streets. As it would be for most Minnesotans, Schaaf described the experience as surreal.

Schaaf visited the protests for three nights straight —Thursday through Saturday — and thought he might return Sunday night as well. Along with providing coverage for his job, Schaaf wanted to witness the protests for himself and hear what the people had to say. But when he arrived on Thursday, he quickly realized this was unlike any experience he’d ever known.

“I get out of the car the first night, I’m walking over and my heart’s just racing. I’m beginning to see evidence of everything,” Schaaf said. “There’s a burning car in the middle of the street, people are shouting stuff and having confrontations with the police. But after about 15 minutes, I became more comfortable. … I felt safe, and then I just went into picture mode, and that’s how it was for most of the night.”

From speaking to and observing protestors, Schaaf said it was clear that many just wanted their message to be heard, while others were there strictly for the carnage. 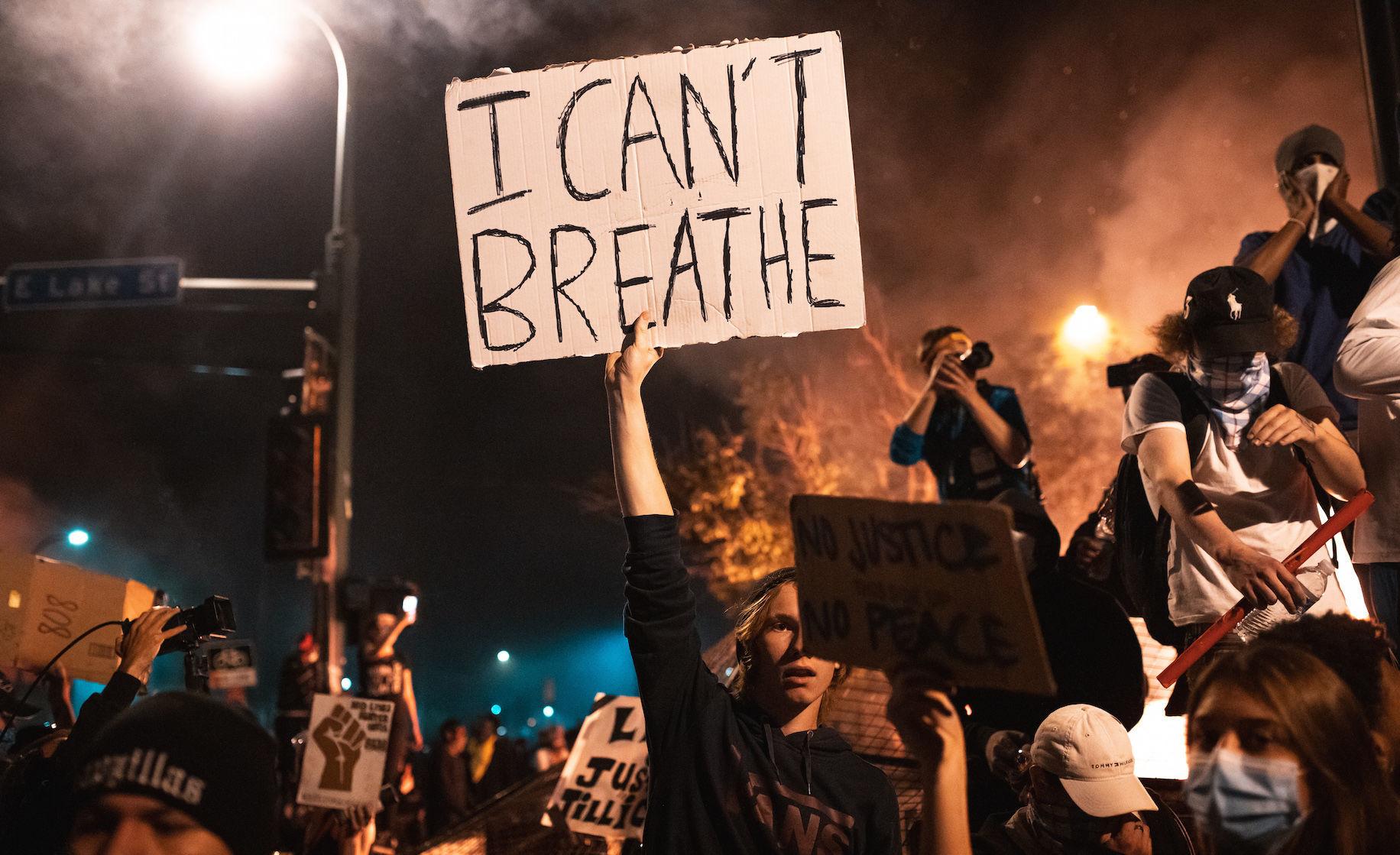 Photo by Tanner Schaaf/Sight by Faith

A protestor holds up a sign that reads “I can’t breathe,” the words George Floyd told police in a now viral video that shows former Minneapolis police officer Derek Chauvin kneeling on Floyd’s neck. Floyd later died in police custody, which has sparked days of protests.

“I experienced a lot of hurt, a lot of pain,” he said. “And I also see that there are people who just don’t care and are there to burn stuff. They don’t care about the protest or anything.”

He said it was hard to determine if it was the protestors who were causing most of the damage, or others using the protest as cover to sow chaos. There has been speculation that outside groups are responsible for much of the destruction in the Twin Cities, an assertion with which Schaaf agrees.

“I almost 100 percent agree with that, just because I experienced it myself,” he said. “This isn’t coming from any source but my own experience, but the experience I’ve had is super weird and suspicious. How much of an outside source? I don’t really know to be honest.”

“The people who set the Arby’s on fire that I witnessed, it was just two white dudes,” Schaaf also said. “I’ve only been threatened twice during this whole thing, and they told me … they were going to smash my camera.”

While Schaaf witnessed his fair share of devastation and looting, he also said there were groups of peaceful protestors actively discouraging violence. He described a feeling of camaraderie amongst the protestors. He thought 80 percent to 90 percent of the protestors didn’t want to see buildings burned and neighborhoods demolished. But while they said they didn’t want violence, many also felt it would be worth it if it helps their message be heard. 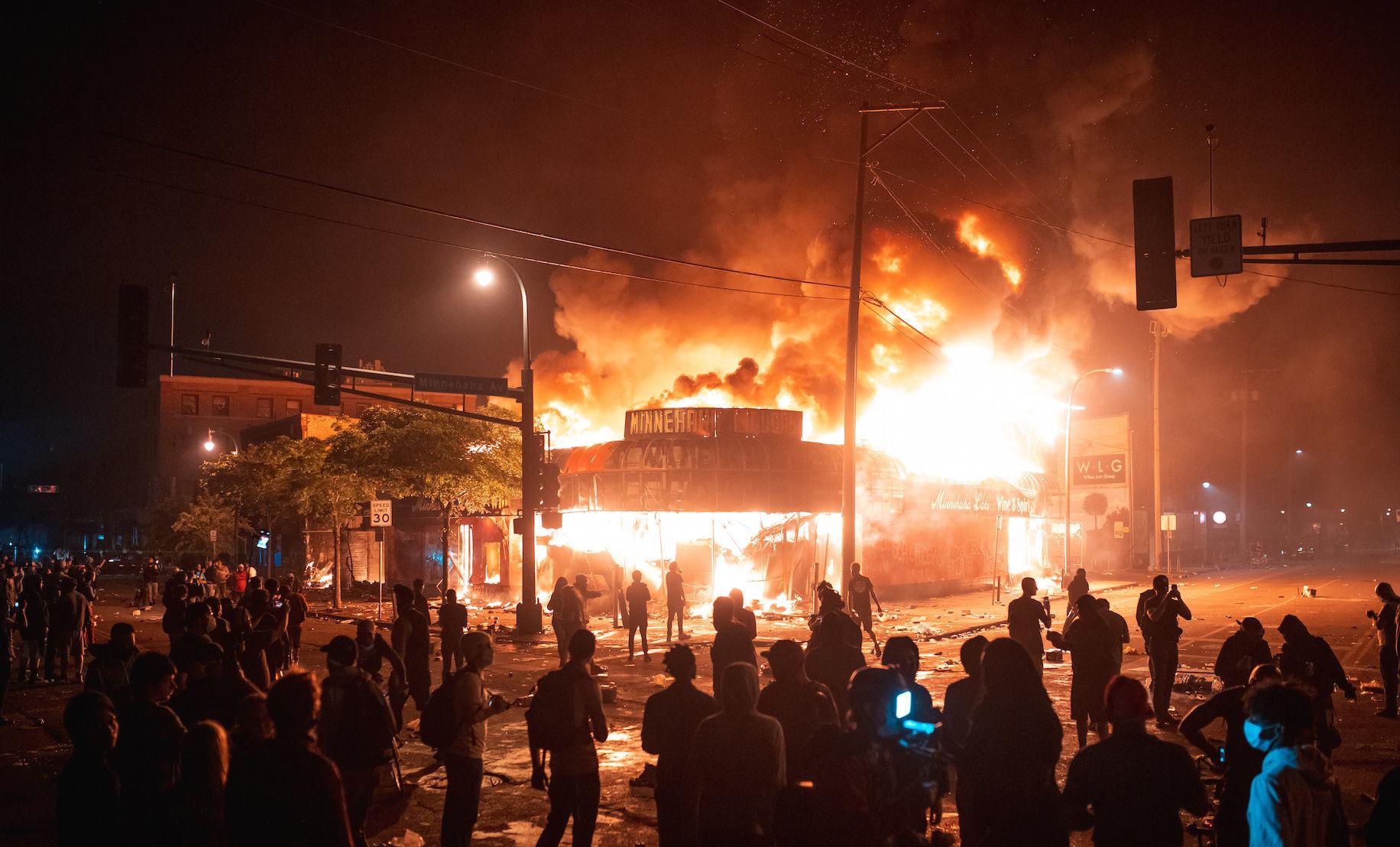 Photo by Tanner Schaaf/Sight by Faith

“When I asked people, ‘What do you think about the burning buildings?’ the same people who told me, ‘Hey, I don’t condone the burning,’ at the same time they’re also like, ‘But if this is the way for our message to be heard, then let it be,’” Schaaf said.

So what is the message protestors want heard? While some blamed all law enforcement and others said the problem is only with a few law enforcement, Schaaf said they agreed that something is wrong about the treatment of black people by the police, and changes must be made.

Whether a week of protests, riots, arson and looting will lead to change remains to be seen.

“I asked one guy, ‘What do you think about this?’ and all he said was, ‘I hope it works,’” Schaaf said. “Even though he doesn’t agree with the methods that are being used, he was just like, ‘Well, I hope it works.’ And that phrase really stuck with me.” 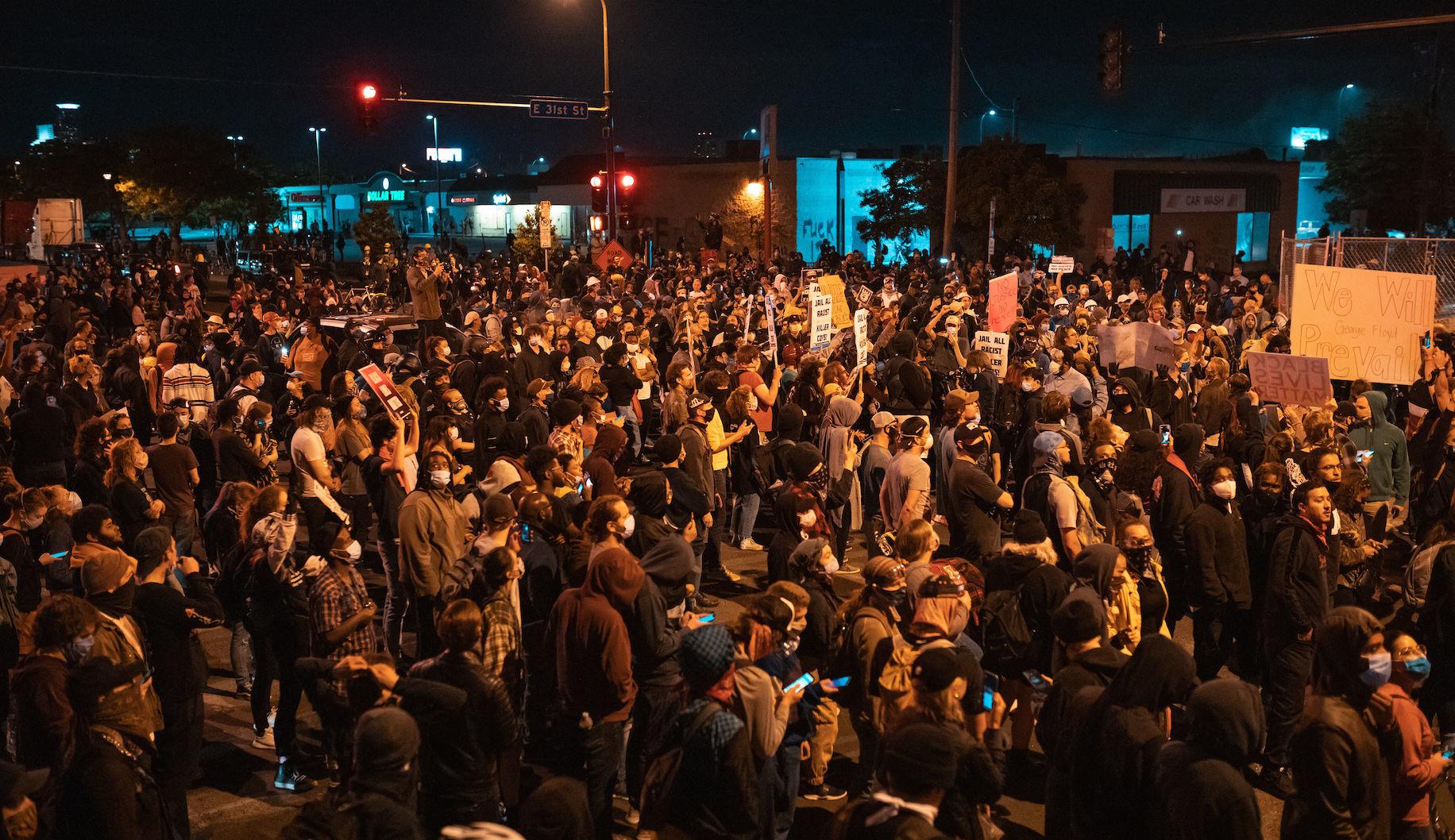 The new wing of Hutchinson Health will open to patients starting Tuesday.

The nurse station at the center of the new wing is designed to be a first point of contact, and to have quick access to the rooms surrounding it.

The larger patient rooms are designed for a visitor side, right, and a staff side, left, in order to allow families to be more comfortable and face less disruption.

Hutchinson Health President James Lyons sits on the family side of the new, larger patient rooms. The entrance of each room is larger as well, allowing for staff to work with less disruption to patients and visitors.

The new wing includes small lobbies for families to take a break.

A $21 million expansion to Hutchinson Health will open for patients Tuesday.

The 18,000-square-foot addition included new, larger patient rooms to accommodate medical equipment and visitors, and make it easier for staff to offer bedside care without disruption.

Construction began in the spring of 2019. Original predictions placed the first patients in the room in July 2020. The original rooms constructed in 1968 are about 150 square feet and weren’t designed to hold the amount of equipment used today. The new rooms are 300 square feet. Slightly larger intensive cares rooms are near other patient rooms, allowing staff to be more flexible.

The transition into the new wing happens swiftly through a short hallway off the hospital's main lobby.

"The process went wonderfully. We had great collaboration between contractors and local businesses, all those involved in the process," said Glen Kegley, Hutchinson Health's chief operating officer. "After we broke ground and began construction, we had a very wet spring in 2019 and had some initial delays. But through some aggressive rescheduling and additional evening and weekend work, we were able to catch up time. We had another wet fall in 2019, lost some ground there and were able to make that up as well."

The COVID-19 pandemic offered a few distractions as the hospital focused on its response, but it did not slow down the overall construction process.

"This is really a significant upgrade of our existing facility," said James Lyons, president of Hutchinson Health. "We'll replace a fair amount of the inpatient space we've used previously. It is a little bit smaller in terms of number of rooms, but that has not been our limiting factor in the past. Our limiting factor has been staffing. This space is adequate in size for the number of patients we see with rooms that are double in size."

He anticipates a better experience for patients, and looks at the construction as a long-term investment. Work also included an update to water, electrical and other systems to support the new space and the rest of the facility going forward.

"This is really setting us up," Lyons said.

Kegley said having space dedicated to family visits in patient rooms allows the family to take part in the important aspects of healing and therapy that will continue when the patient returns home. There are also dedicated family lounges in the new wing.

The rooms have wide, open windows to allow for more natural light, as do the two nurse stations designed to be easily accessed as a first point of contact for visitors. The stations also have a "nourishment station" for snacks and water. Adjacent huddle rooms provide a space for daily huddles among all medical disciplines to collaborate on patient care.

The patient rooms are all located in a loop around the outside of the new wing with the staff spaces in the center.

Among the costs the city has incurred due to the COVID-19 pandemic is the expense of building protective glass and plexiglass shields for counters at city facilities, such as the administrative window at Hutchinson City Center.

The economic effects of COVID-19 and stay-at-home orders are hitting budgets for people and businesses around the state. And as the Hutchinson City Council discussed during a budget workshop meeting May 26, the city’s coffers have been hit as well.

“I would say this is our early look. … As we’ve seen, there is still a lot to come on this,” said City Administrator Matt Jaunich, who indicated a more clear budget picture may be available later in June.

While the lost revenue hurts, the city is able to offset some of it with reduced expenses, especially in the area of wages and benefits. Many seasonal employees have not been hired to fill positions in the Park and Rec department, such as staff for the Aquatic Center.

Another economic impact is a projected loss of $221,100 of sales tax revenue to the city’s water and wastewater funds, and Jaunich said that estimate could be low.

“It really just depends how long the economy is closed down,” he said. “Every 5 percent decrease in local sales tax revenue amounts to a $70,000 loss in revenue. We may have to use some of our cash reserves to cover our debt payments. We have healthy cash reserves, so we can handle this for a year or two.”

Lastly, the city has had to spend about $40,600 in other expenses related to the pandemic. That includes about $20,000 to purchase personal protective equipment, cleaning supplies and signage, plus about $20,600 for service counter safety improvements (glass and plexiglass shields) at city facilities such as the liquor store, DMV, administrative counter and more.

While the city is looking at its financial forecast, it’s also looking at possible county, state and federal sources for emergency funding. Unfortunately that picture has also not come into focus yet.

“The one thing we just don’t know is in regards to potential FEMA aid and/or CARES Act funding,” Jaunich said. “It’s really unclear at this time what type of reimbursement we’re going to get.”

The CARES Act — or Coronavirus Aid, Relief, and Economic Security Act — was signed into law by Congress back in March. As part of the legislation, Minnesota received more than $2 billion with the suggestion that 45 percent go to local governments. But that is not required. Walz has said he plans to distribute some of the money to cities on a per capita basis. Using one such per capita disbursement formula that has been discussed, Hutchinson would received up to $1.2 million.

There is a catch, of course. The money can only be spent on coronavirus-related expenses incurred between March and the end of 2020. It can’t be spent to replace lost revenue, and any money not used must be given back.

“The only thing I can see for us that we can reimburse ourselves for is unemployment benefits we’re paying out, and I believe the service counter improvements we’re making,” said Andy Reid, the city’s finance director. “Otherwise that is the extent of what I can see we can use the money for. Other purposes laid out in the information I received include grants to help prevent eviction and homelessness, emergency assistance to individuals and families due to loss of income due to COVID, and small business grants due to COVID as well. So those are items we can think about if we do receive this $1.2 million from the state.”