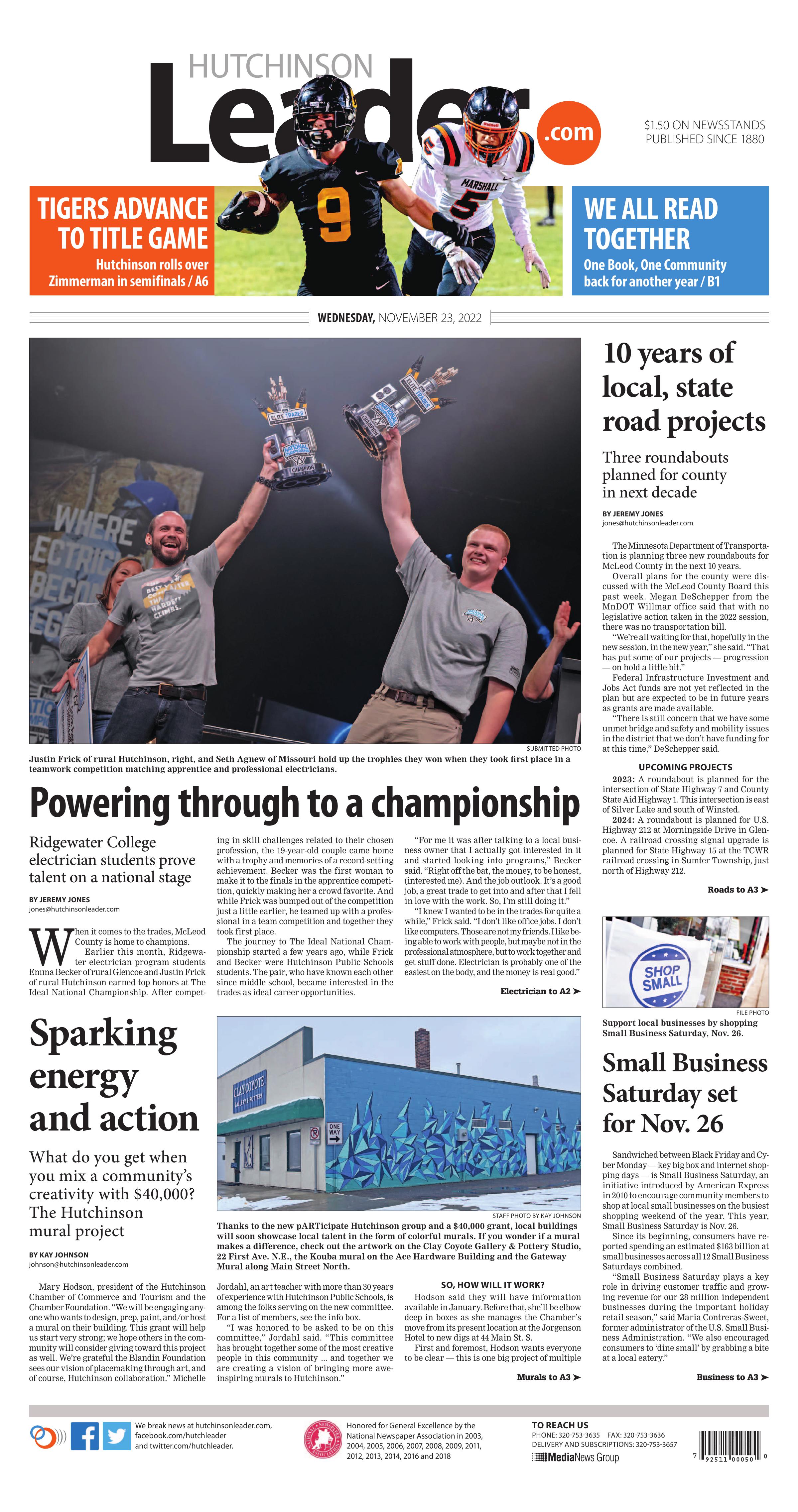 Justin Frick of rural Hutchinson, right, and Seth Agnew of Missouri hold up the trophies they won when they took first place in a teamwork competition matching apprentice and professional electricians.

Emma Becker and Justin Frick, who both competed at the Ideal National Championship as apprentice electricians, pose together with a trophy and check Frick won in the team competition.

Emma Becker was described by Electric Industry News Week as having a “deliberate and methodical work ethic” during her run to the finals of The Ideal National Championship.

When it comes to the trades, McLeod County is home to champions.

Earlier this month, Ridgewater electrician program students Emma Becker of rural Glencoe and Justin Frick of rural Hutchinson earned top honors at The Ideal National Championship. After competing in skill challenges related to their chosen profession, the 19-year-old couple came home with a trophy and memories of a record-setting achievement. Becker was the first woman to make it to the finals in the apprentice competition, quickly making her a crowd favorite. And while Frick was bumped out of the competition just a little earlier, he teamed up with a professional in a team competition and together they took first place.

The journey to The Ideal National Championship started a few years ago, while Frick and Becker were Hutchinson Public Schools students. The pair, who have known each other since middle school, became interested in the trades as ideal career opportunities.

“For me it was after talking to a local business owner that I actually got interested in it and started looking into programs,” Becker said. “Right off the bat, the money, to be honest, (interested me). And the job outlook. It’s a good job, a great trade to get into and after that I fell in love with the work. So, I’m still doing it.”

“I knew I wanted to be in the trades for quite a while,” Frick said. “I don’t like office jobs. I don’t like computers. Those are not my friends. I like being able to work with people, but maybe not in the professional atmosphere, but to work together and get stuff done. Electrician is probably one of the easiest on the body, and the money is real good.”

They both found Ridgewater College to be the most convenient education option, both due to its proximity, and “reasonable price.”

The Ideal National Championship was introduced to Becker and Frick by a former instructor when they were in their first year in the electrician program.

“We went to the Upper Midwest Electrical Expo last year, and he told us they were going to have a booth there, and we could compete if we wanted to,” Becker said. “I actually won that qualifier (at the booth). That was my first year so this is my second year competing. ... Last year went not so great. I was out in the first round (at nationals). It was my first year doing any sort of electrical work, so the fact that I got there I was happy with.”

The qualifier had electricians demonstrate their skills by wiring and splicing in a manner similar to that which they would have to do in a house. They then used a meter to see if they had finished the operation successfully.

“I did not qualify at the expo (last year),” Frick said. “I was beaten pretty good. But this year I was able to qualify in South Dakota, because that’s where we were. I got in this year for my first year.”

Becker qualified this year as well, and the two made plans to travel to the Tampa Convention Center in Tampa, Florida, for the Nov. 4-6 competition. They flew together, but they were not alone.

“We had a huge support group go with us,” Becker said. “Both of my parents went, and two of my brothers. And my aunt and uncle, and Justin’s parents went, too. They all got matching T-shirts and everything.”

“It was pretty cool,” Frick said.

The tournament is divided into professional and apprentice categories, with a team competition, as well, which randomly matches someone from each group. As students, Frick and Becker competed in the apprentice category in a field of 74. They competed in rounds, which first narrowed the group to 30, then to 10, and then to five for the final round.

That gave him the opportunity to be partnered with a professional, Seth Agnew of Missouri, in a separate category.

The teamwork of Frick and Agnew spoke for itself, with the two taking first place in the team competition and earning a pair of trophies to take home.

“It was great. What a surprise,” Agnew said.

Agnew, who has fibromyalgia, said he barely had enough to make it through to the semifinals.

“When they announced we were doing another round I was like, you gotta be kidding me,” he said. “I asked Justin beforehand, ‘Do you believe in God? Because we need a miracle.’ So, we said a quick prayer right before we walked out and we went to it, and it seems like it was a miracle, really, quite frankly.”

“Especially seeing him and Emma in love reminded me of my wife and I 20 years ago when we met,” he said. “That young love, and they’re both doing electrical. I was really inspired.”

Meanwhile, Becker had drawn quite a crowd of supporters as she became the first woman to reach the top five. The Electrical Industry News Week, a Canadian publication, described Becker as a “bright spot” in the competition.

“That was the best part for me, just to see all the support and everyone cheering,” Becker said. “And not just the people who came down with us, but other competitors were cheering for me. I met a fellow competitor; his daughters were cheering for me. That was super cool. And people on Facebook Live I have never heard of going, ‘Yeah, go Emma,’ and wives, moms, they were like ‘You go girl.’”

Becker and Frick have since returned home to McLeod County, and they still have a road ahead of them. They expect to graduate from Ridgewater College this spring. Becker has a job lined up with Interstate Electric. As part of its national travel team, she will be able to journey around taking on jobs. Frick is aiming for his master’s license, and to keep moving up in the electrician field.

A roundabout is planned for the intersection of Morningside Drive and U.S. Highway 212 in Glencoe. Two more are planned for elsewhere in the county.

The Minnesota Department of Transportation is planning three new roundabouts for McLeod County in the next 10 years.

Overall plans for the county were discussed with the McLeod County Board this past week. Megan DeSchepper from the MnDOT Willmar office said that with no legislative action taken in the 2022 session, there was no transportation bill.

“We’re all waiting for that, hopefully in the new session, in the new year,” she said. “That has put some of our projects — progression — on hold a little bit.”

Federal Infrastructure Investment and Jobs Act funds are not yet reflected in the plan but are expected to be in future years as grants are made available.

“There is still concern that we have some unmet bridge and safety and mobility issues in the district that we don’t have funding for at this time,” DeSchepper said.

2023: A roundabout is planned for the intersection of State Highway 7 and County State Aid Highway 1. This intersection is east of Silver Lake and south of Winsted.

2025: A roundabout on Highway 212 is planned for the intersection with Highway 15, southwest of Brownton.

2026: A high tension cable median barrier is planned for installation in the middle of the ditch between the two lanes of Highway 212 from State Highway 22 west of Glencoe to the east county line. Striping and center line rumble are planned for Highway 7 and Highway 22.

2031: Cold in-place recycling and overlay work is planned for Highway 212 from CSAH 16 to Stewart.

“People don’t always like the projects,” said McLeod County Board Chair Doug Krueger. “Well, that’s what we get. And the data shows it’s helpful. So I appreciate that.”

Since its beginning, consumers have reported spending an estimated $163 billion at small businesses across all 12 Small Business Saturdays combined.

Locally, the Hutchinson Area Chamber of Commerce and Tourism is special events to encourage local shopping.

As in past years, there are ping-pong balls in the plans. Only this time, rather than dropping them from up on high, there will be a ping-ball hunt — just like an Easter egg hunt — in downtown Hutchinson’s Library Square. This event is for children and adults and will start at 10 a.m. sharp. Dress for the weather and enjoy the hunt for prizes.

Also out and about on Saturday, will be the famous Chamber elves. These merry folks will be handing out gift cards to shoppers. Maybe you’ll be one of the lucky ones to receive one.

“We have $4,000 invested in purchasing gift cards around town,” said Mary Hodson, president of the Hutchinson Area Chamber of Commerce and Tourism. “So far, 90% of the businesses have matched or more.”

For more information, about Hutchinson’s Small Business Saturday events, call the Chamber at 320-587-5252.