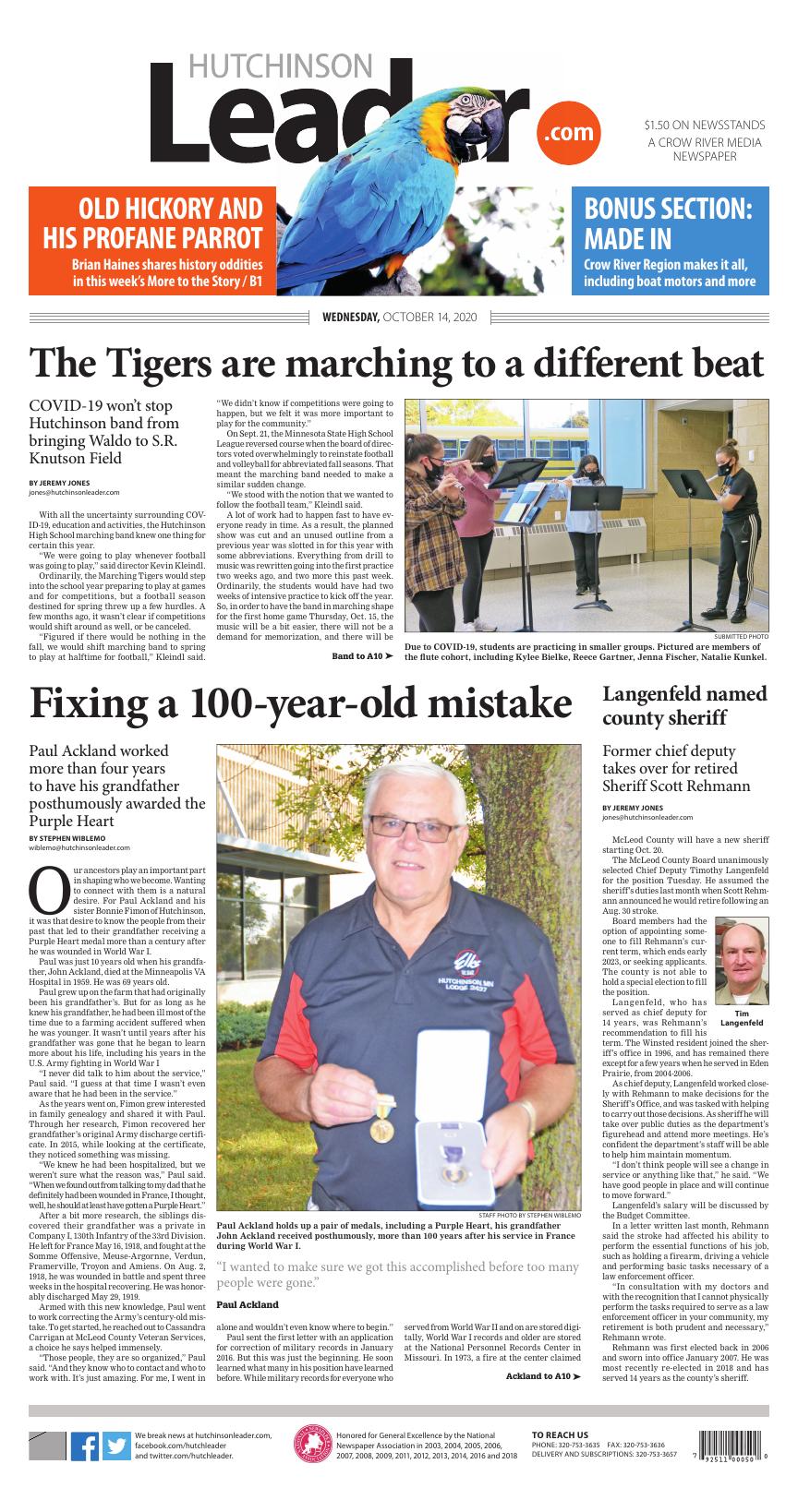 Due to COVID-19, students are practicing in smaller groups. Pictured are members of the flute cohort, including Kylee Bielke, Reece Gartner, Jenna Fischer, Natalie Kunkel.

Ben Pollmann, Jack Matheny, Chase Maiers, Wayne Heller and Ben Schmalz were among those working on the marching fundamentals at a recent practice.

With all the uncertainty surrounding COVID-19, education and activities, the Hutchinson High School marching band knew one thing for certain this year.

Ordinarily, the Marching Tigers would step into the school year preparing to play at games and for competitions, but a football season destined for spring threw up a few hurdles. A few months ago, it wasn't clear if competitions would shift around as well, or be canceled.

"Figured if there would be nothing in the fall, we would shift marching band to spring to play at halftime for football," Kleindl said. "We didn't know if competitions were going to happen, but we felt it was more important to play for the community."

On Sept. 21, the Minnesota State High School League reversed course when the board of directors voted overwhelmingly to reinstate football and volleyball for abbreviated fall seasons. That meant the marching band needed to make a similar sudden change.

"We stood with the notion that we wanted to follow the football team," Kleindl said.

A lot of work had to happen fast to have everyone ready in time. As a result, the planned show was cut and an unused outline from a previous year was slotted in for this year with some abbreviations. Everything from drill to music was rewritten going into the first practice two weeks ago, and two more this past week. Ordinarily, the students would have had two weeks of intensive practice to kick off the year. So, in order to have the band in marching shape for the first home game Thursday, Oct. 15, the music will be a bit easier, there will not be a demand for memorization, and there will be fewer songs to start.

"We want it to be as stress-free as possible," Kleindl said. "We are not going to have time to put a full show out there for the first game, so we're going to do one or two of the pieces and then add to the show each football game. By the Nov. 6 game, we should have our complete show."

Many are familiar with "Where's Waldo?," a series of children's puzzle books where the reader is tasked with finding the oddly dressed Waldo on a page full of strange characters. The Marching Tigers are taking on this concept with drum major Landon Butler filling Waldo's role.

"I'll be running around the whole time doing a little bit of everything, as well as drum major things," Butler said.

Ultimately, Kleindl said, the goal is to make sure another experience for students isn't lost to COVID-19.

"We're trying to give the kids, especially the seniors, a marching season they can be happy with and proud to perform in," Kleindl said.

"It's just good to have anything at this point," said Butler, a senior. "It was a real big bummer not to have any sort of band for a chunk of the (past) year. It feels nice to get back with everyone and make some music and do some marching."

Butler likened the loss of marching band to the loss of a sense of family, community and camaraderie.

When students moved to distance learning during the final portion of the 2019-20 school year, band wasn't quite the same.

"Due to internet speeds and latency in different houses it was difficult to pull off," said Hutchinson High School band director Kevin Kleindl.

With students returning to school this year, much is improved with a return to in-person learning, but not everything is perfect.

"With a hybrid model, we're only seeing half the kids (at once)," Kleindl said. ""So there are some classes with different instruments, or you only have one trumpet when normally I'd have nine or 10. So the instrumentation is a little different."

Despite the challenge of students learning in different groups, the band still hopes to have some sort of concert Nov. 16 as previously planned.

"It just might look a little different," Kleindl said.

"But it's all up in the air, much like everything," Kleindl said.

To keep the band room safe and students healthy, the hybrid learning model allows seating of six feet apart or more. Every instrument has a bell cover.

It's a little different, but "I'm excited to be in front of a band again, in front of kids," Kleindl said.

Paul Ackland holds up a pair of medals, including a Purple Heart, his grandfather John Ackland received posthumously, more than 100 years after his service in France during World War I.

Our ancestors play an important part in shaping who we become. Wanting to connect with them is a natural desire. For Paul Ackland and his sister Bonnie Fimon of Hutchinson, it was that desire to know the people from their past that led to their grandfather receiving a Purple Heart medal more than a century after he was wounded in World War I.

Paul was just 10 years old when his grandfather, John Ackland, died at the Minneapolis VA Hospital in 1959. He was 69 years old.

Paul grew up on the farm that had originally been his grandfather’s. But for as long as he knew his grandfather, he had been ill most of the time due to a farming accident suffered when he was younger. It wasn’t until years after his grandfather was gone that he began to learn more about his life, including his years in the U.S. Army fighting in World War I

“I never did talk to him about the service,” Paul said. “I guess at that time I wasn’t even aware that he had been in the service.”

As the years went on, Fimon grew interested in family genealogy and shared it with Paul. Through her research, Fimon recovered her grandfather’s original Army discharge certificate. In 2015, while looking at the certificate, they noticed something was missing.

“We knew he had been hospitalized, but we weren’t sure what the reason was,” Paul said. “When we found out from talking to my dad that he definitely had been wounded in France, I thought, well, he should at least have gotten a Purple Heart.”

After a bit more research, the siblings discovered their grandfather was a private in Company I, 130th Infantry of the 33rd Division. He left for France May 16, 1918, and fought at the Somme Offensive, Meuse-Argornne, Verdun, Framerville, Troyon and Amiens. On Aug. 2, 1918, he was wounded in battle and spent three weeks in the hospital recovering. He was honorably discharged May 29, 1919.

Armed with this new knowledge, Paul went to work correcting the Army’s century-old mistake. To get started, he reached out to Cassandra Carrigan at McLeod County Veteran Services, a choice he says helped immensely.

“Those people, they are so organized,” Paul said. “And they know who to contact and who to work with. It’s just amazing. For me, I went in alone and wouldn’t even know where to begin.”

Paul sent the first letter with an application for correction of military records in January 2016. But this was just the beginning. He soon learned what many in his position have learned before. While military records for everyone who served from World War II and on are stored digitally, World War I records and older are stored at the National Personnel Records Center in Missouri. In 1973, a fire at the center claimed millions of military personnel files, and what wasn’t lost has been left in disarray. Before the military would award his grandfather’s Purple Heart, it would have to check its files to make sure the claims were correct.

Thus began years of back-and-forth correspondences. It took so long, in fact, that when Paul received a message in June 2019, saying his grandfather was entitled to a Purple Heart, he had almost forgotten about it.

“At that point it had been over three years since something had finally happened,” Paul said. “It had been so long. Sometimes there would be six or nine months between correspondence. You just begin to think, well, this just isn’t going to happen.”

Even after learning his grandfather was entitled to a Purple Heart, the medal itself did not arrive until early this past September. All the work and waiting has paid off, though, and Paul is happy to finally have this connection to his grandfather to share with family members.

“I spent two-and-a-half years in the U.S. Army during the Vietnam era, and my son served in the National Guard, and I guess you could say, a little bit, that we are a military family,” Paul said, “and I wanted to make sure we got this accomplished before too many people were gone.”

Most importantly, Paul is glad to have received his grandfather’s medal while his own father, also named John, is still alive.

“He’s 93 years old,” Paul said. “I was getting concerned that this may not happen and he’ll be around.”

Paul is now planning a trip to see his father in Mission, Texas, and surprise him with the medal.

“I’m still very emotional about it,” Paul said. “And I’m very excited about being able to travel and see my dad. I haven’t seen him since last October.”

"I wanted to make sure we got this accomplished before too many people were gone.”

McLeod County will have a new sheriff starting Oct. 20.

The McLeod County Board unanimously selected Chief Deputy Timothy Langenfeld for the position Tuesday. He assumed the sheriff’s duties last month when Scott Rehmann announced he would retire following an Aug. 30 stroke.

Board members had the option of appointing someone to fill Rehmann’s current term, which ends early 2023, or seeking applicants. The county is not able to hold a special election to fill the position.

Langenfeld, who has served as chief deputy for 14 years, was Rehmann’s recommendation to fill his term. The Winsted resident joined the sheriff’s office in 1996, and has remained there except for a few years when he served in Eden Prairie, from 2004-2006.

As chief deputy, Langenfeld worked closely with Rehmann to make decisions for the Sheriff’s Office, and was tasked with helping to carry out those decisions. As sheriff he will take over public duties as the department’s figurehead and attend more meetings. He’s confident the department’s staff will be able to help him maintain momentum.

“I don’t think people will see a change in service or anything like that,” he said. “We have good people in place and will continue to move forward.”

Langenfeld’s salary will be discussed by the Budget Committee.

In a letter written last month, Rehmann said the stroke had affected his ability to perform the essential functions of his job, such as holding a firearm, driving a vehicle and performing basic tasks necessary of a law enforcement officer.

“In consultation with my doctors and with the recognition that I cannot physically perform the tasks required to serve as a law enforcement officer in your community, my retirement is both prudent and necessary,” Rehmann wrote.

Rehmann was first elected back in 2006 and sworn into office January 2007. He was most recently re-elected in 2018 and has served 14 years as the county’s sheriff. 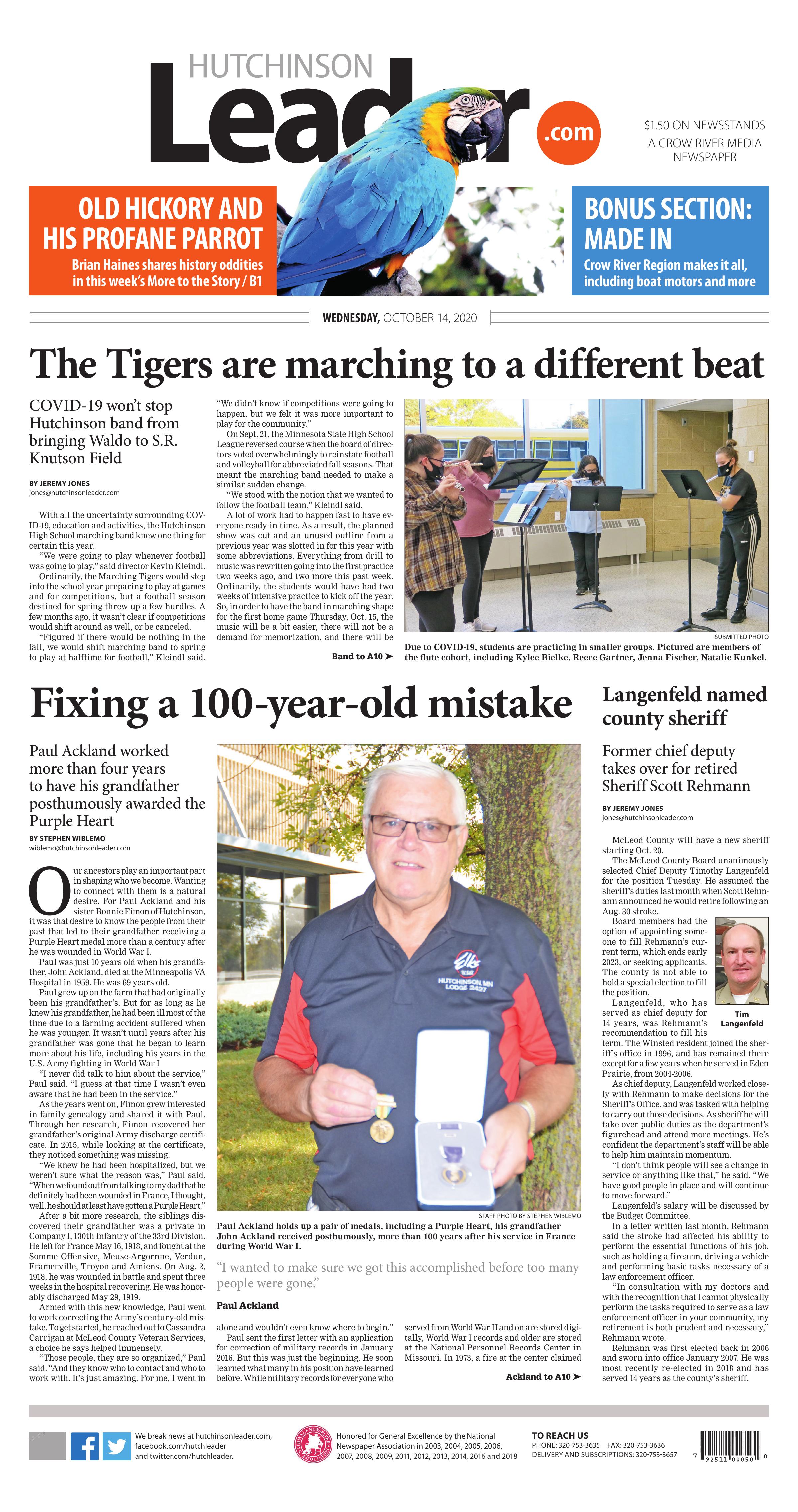