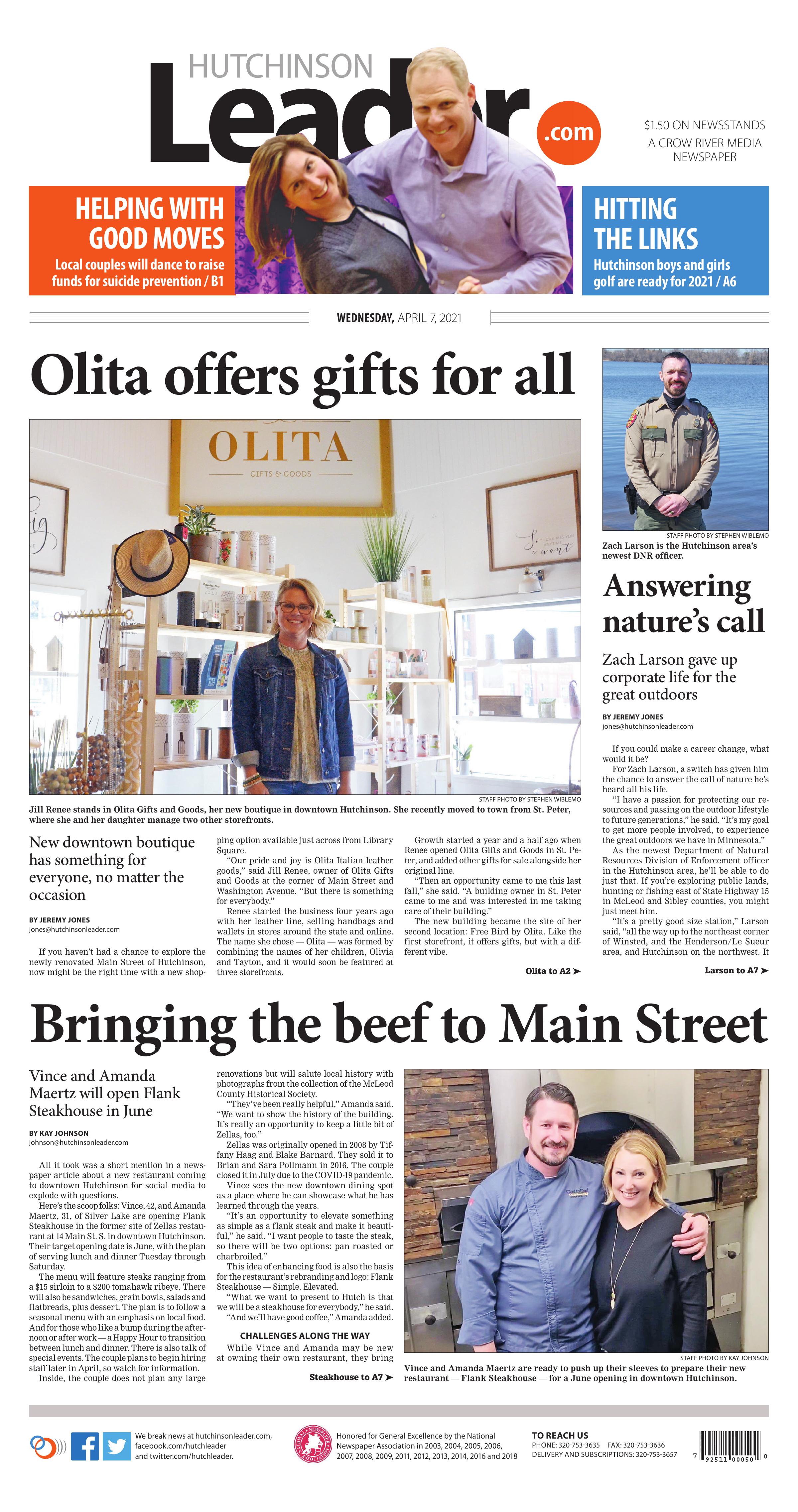 Jill Renee stands in Olita Gifts and Goods, her new boutique in downtown Hutchinson. She recently moved to town from St. Peter, where she and her daughter manage two other storefronts.

If you haven't had a chance to explore the newly renovated Main Street of Hutchinson, now might be the right time with a new shopping option available just across from Library Square.

"Our pride and joy is Olita Italian leather goods," said Jill Renee, owner of Olita Gifts and Goods at the corner of Main Street and Washington Avenue. "But there is something for everybody."

Renee started the business four years ago with her leather line, selling handbags and wallets in stores around the state and online. The name she chose — Olita — was formed by combining the names of her children, Olivia and Tayton, and it would soon be featured at three storefronts.

Growth started a year and a half ago when Renee opened Olita Gifts and Goods in St. Peter, and added other gifts for sale alongside her original line. 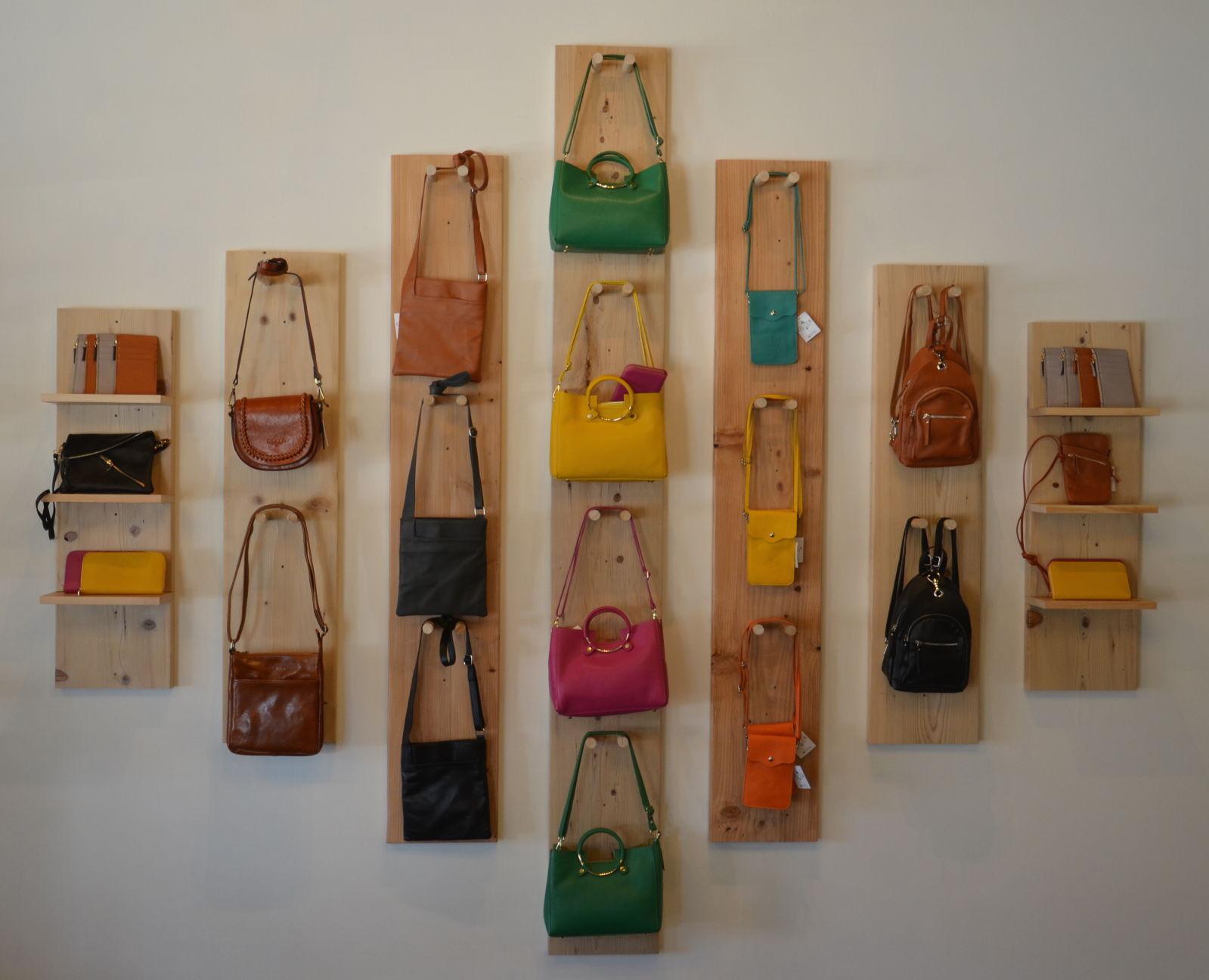 Olita's Italian leather goods are the store's "pride and joy," according to the owner Jill Renee.

"Then an opportunity came to me this last fall," she said. "A building owner in St. Peter came to me and was interested in me taking care of their building."

The new building became the site of her second location: Free Bird by Olita. Like the first storefront, it offers gifts, but with a different vibe.

"Free Bird is more of a natural Boho vibe with macramé and wood pieces," Renee said. "Olita is more trendy and bright."

The Hutchinson location offers a combination of the two styles.

"We have the genuine Italian leather made in Italy," Renee said. "And we have greeting cards, books, journals, coffee cups, tumblers, candles. ... We even have a whole separate area/room that's all kid stuff like art supplies, books, candies, hair bows (and) science experiment kits."

The local expansion came about because Renee moved to Hutchinson. The storefront near State Theatre caught her eye, and when the former Trump Store closed she contacted the building owner.

"I took a look and it was the right fit," she said. 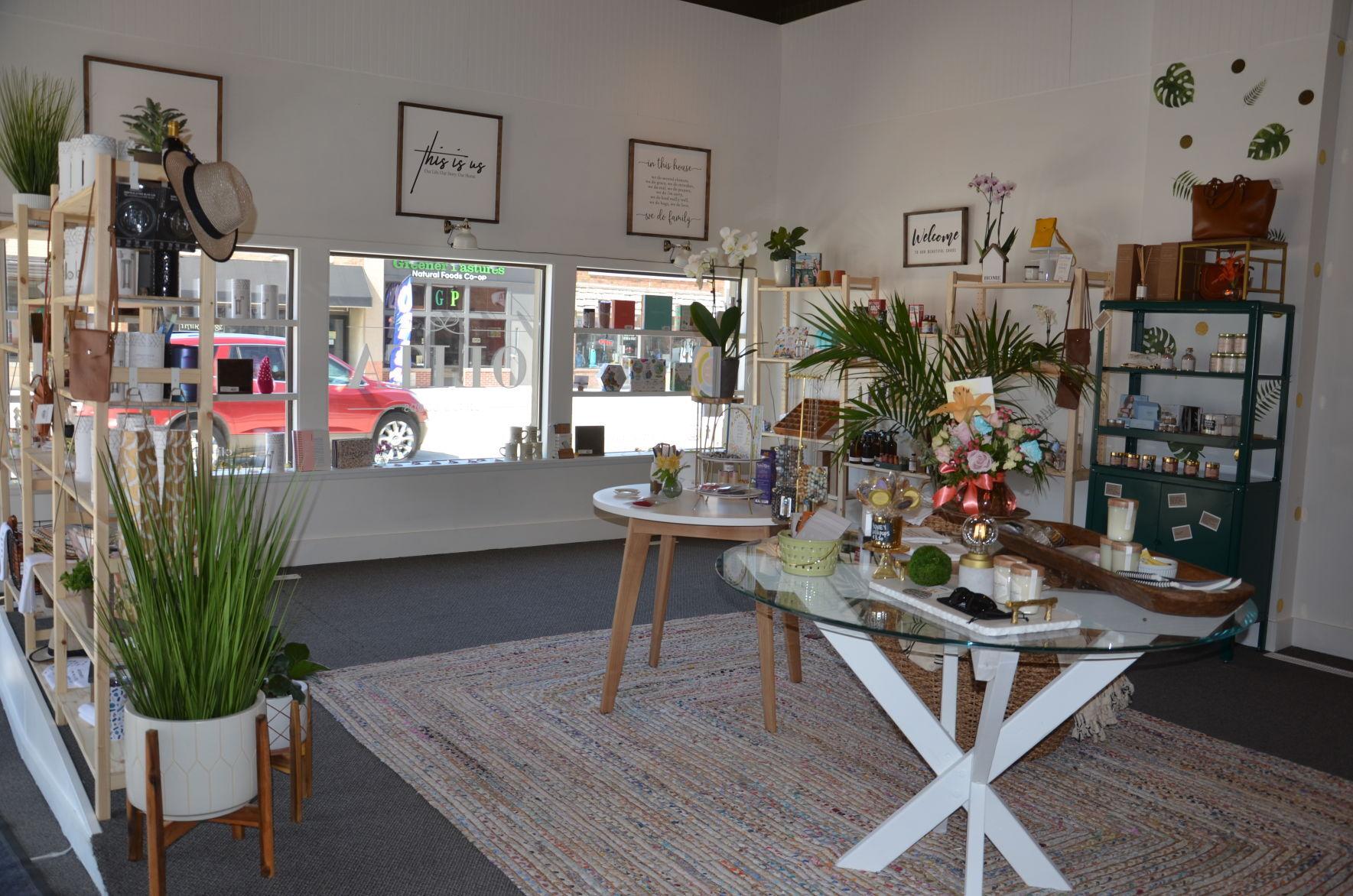 While Italian leather goods are Olita’s specialty, there’s much more to find at the new store on the corner of Washington Avenue and Main Street.

Renee spent two months remodeling the Hutchinson store while her daughter managed the St. Peter locations. She found herself welcomed by the city and Hutchinson Area Chamber of Commerce and Tourism, and on March 24, Renee opened her third storefront for business 10 a.m.-5 p.m. Wednesday through Saturday,

"It feels like home," she said. "(Hutchinson) has that same feeling as St. Peter where I was born and raised. It's a small town but it's energetic. There is a lot going on. I love that."

These days, it's hard to talk business without factoring in COVID-19. The same was true for Olita.

"Sales went down," she said. "There's no difference there. I really try to keep my overhead as low as I can and keep things simple." 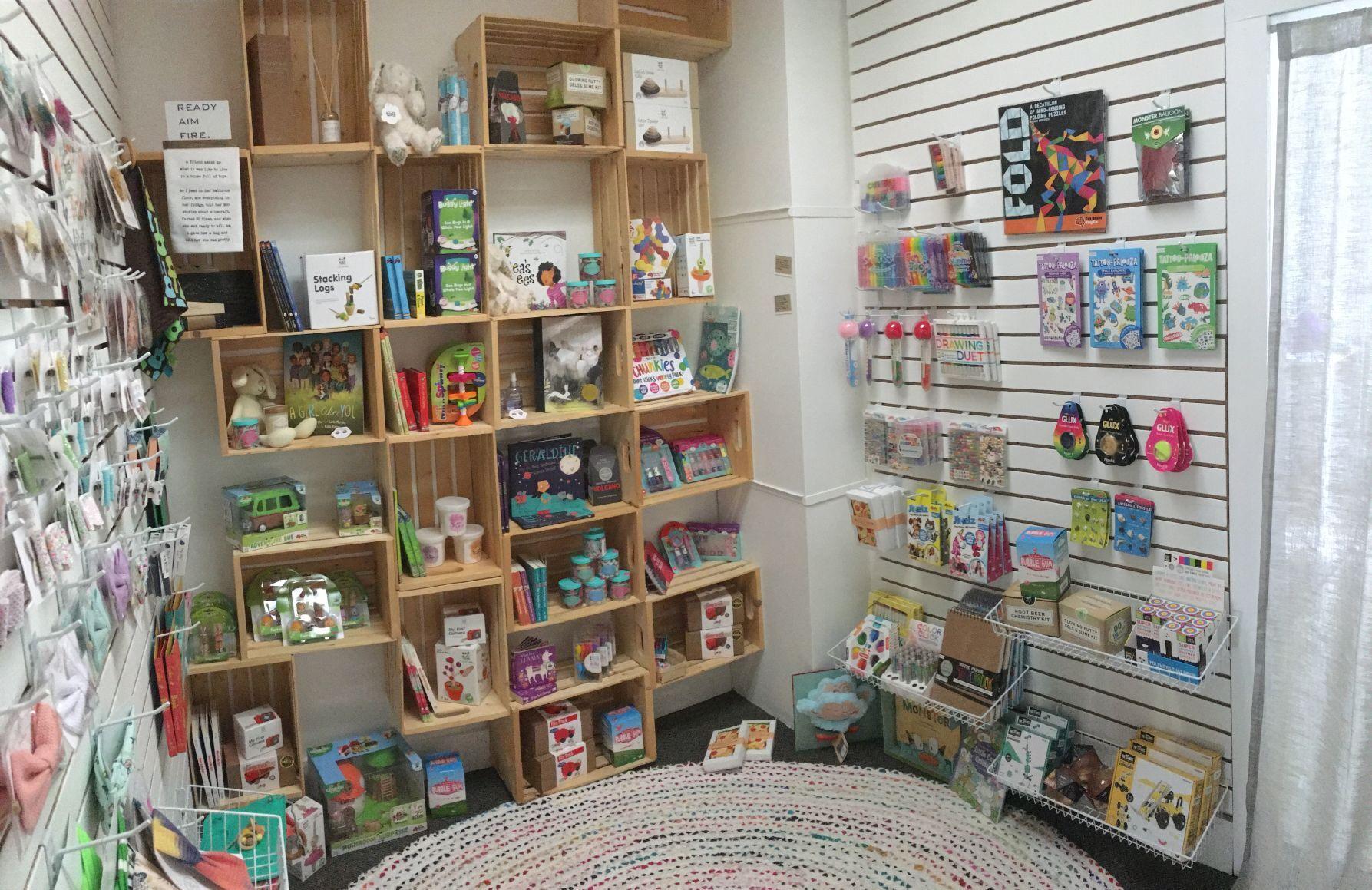 Olita even offers a corner of gifts for children, such as books, art supplies, science kits and more.

During the remodel in Hutchinson, Renee reused as much lumber as possible when redesigning the space in order to keep costs down. She also kept plans as conservative as possible.

"Would I love to put wood floors in? Absolutely. But it's maybe not so smart during a pandemic," she said.

She carries the same philosophy over into promotion, making regular use of social media on Facebook and Instagram.

"No matter where you're at in life, we still buy gifts," Renee said. "We still buy anniversary gifts, we still buy kids gifts. There is always a reason to gift. It doesn't have to be something expensive. It can be as simple as $8 earrings."

All it took was a short mention in a newspaper article about a new restaurant coming to downtown Hutchinson for social media to explode with questions.

Here’s the scoop folks: Vince, 42, and Amanda Maertz, 31, of Silver Lake are opening Flank Steakhouse in the former site of Zellas restaurant at 14 Main St. S. in downtown Hutchinson. Their target opening date is June, with the plan of serving lunch and dinner Tuesday through Saturday.

The menu will feature steaks ranging from a $15 sirloin to a $200 tomahawk ribeye. There will also be sandwiches, grain bowls, salads and flatbreads, plus dessert. The plan is to follow a seasonal menu with an emphasis on local food. And for those who like a bump during the afternoon or after work — a Happy Hour to transition between lunch and dinner. There is also talk of special events. The couple plans to begin hiring staff later in April, so watch for information.

Inside, the couple does not plan any large renovations but will salute local history with photographs from the collection of the McLeod County Historical Society.

“They’ve been really helpful,” Amanda said. “We want to show the history of the building. It’s really an opportunity to keep a little bit of Zellas, too.”

Zellas was originally opened in 2008 by Tiffany Haag and Blake Barnard. They sold it to Brian and Sara Pollmann in 2016. The couple closed it in July due to the COVID-19 pandemic.

Vince sees the new downtown dining spot as a place where he can showcase what he has learned through the years.

“It’s an opportunity to elevate something as simple as a flank steak and make it beautiful,” he said. “I want people to taste the steak, so there will be two options: pan roasted or charbroiled.”

This idea of enhancing food is also the basis for the restaurant’s rebranding and logo: Flank Steakhouse — Simple. Elevated.

“What we want to present to Hutch is that we will be a steakhouse for everybody,” he said.

CHALLENGES ALONG THE WAY

While Vince and Amanda may be new at owning their own restaurant, they bring plenty of experience to the table. Vince is self-taught with 25 years working in kitchens, and Amanda has worked for 11 years at the Lafayette Club on the shores of Lake Minnetonka — six of which were spent in front-of-house management.

“My wife and I met while working, and we have managed together, are raising a family together, and want to give these same opportunities to the people we employ,” Vince said.

While he grew up in St. Paul and she in the Monticello area, it was finding the perfect home that brought them to the rural community of Silver Lake.

Owning their own restaurant was always in their hearts, but it was the donation of a dinner by Vince to the Hutchinson Health Foundation that got the ball rolling. After the private dinner, community members encouraged the couple to consider opening a restaurant in the former Zellas space on Main Street.

For the past three months, the husband-and-wife team have been working on their restaurant project. His first thought was a steakhouse and they haven’t wavered from it. As first-time business owners, they have navigated the process with the help of the Small Business Development Center and Southwest Initiative Foundation.

While being first-time business owners is daunting, Vince had another challenge: Drugs and alcohol led him to spending 15 months inside the Minnesota corrections system. He learned from his mistakes and has been sober since June 26, 2014. He shared his story in the book “Breaking Free,” which presents a dual perspective from himself and his mother, Anne. The book chronicles Maertz’s life in prison, his addiction and his redemption. In addition to the book, he shares his story through public speaking.

“I am active in my recovery and in the program of AA,” he said. “I want to continue to make positive changes in my life.”

With the closing date to be finalized, staff to be hired, signs to be made, pictures to be hung and the menu finalized, there’s plenty for Vince and Amanda to do before they open the doors of Flank Steakhouse.

“This is our dream, and we are excited to be part of the Hutchinson business community,” he said. “Come talk to us and meet us. We’ll be here a lot.”

"It's an opportunity to elevate something as simple as a flank steak and make it beautiful," he said. "I want people to taste the steak, so there will be two options: pan roasted or charbroiled." 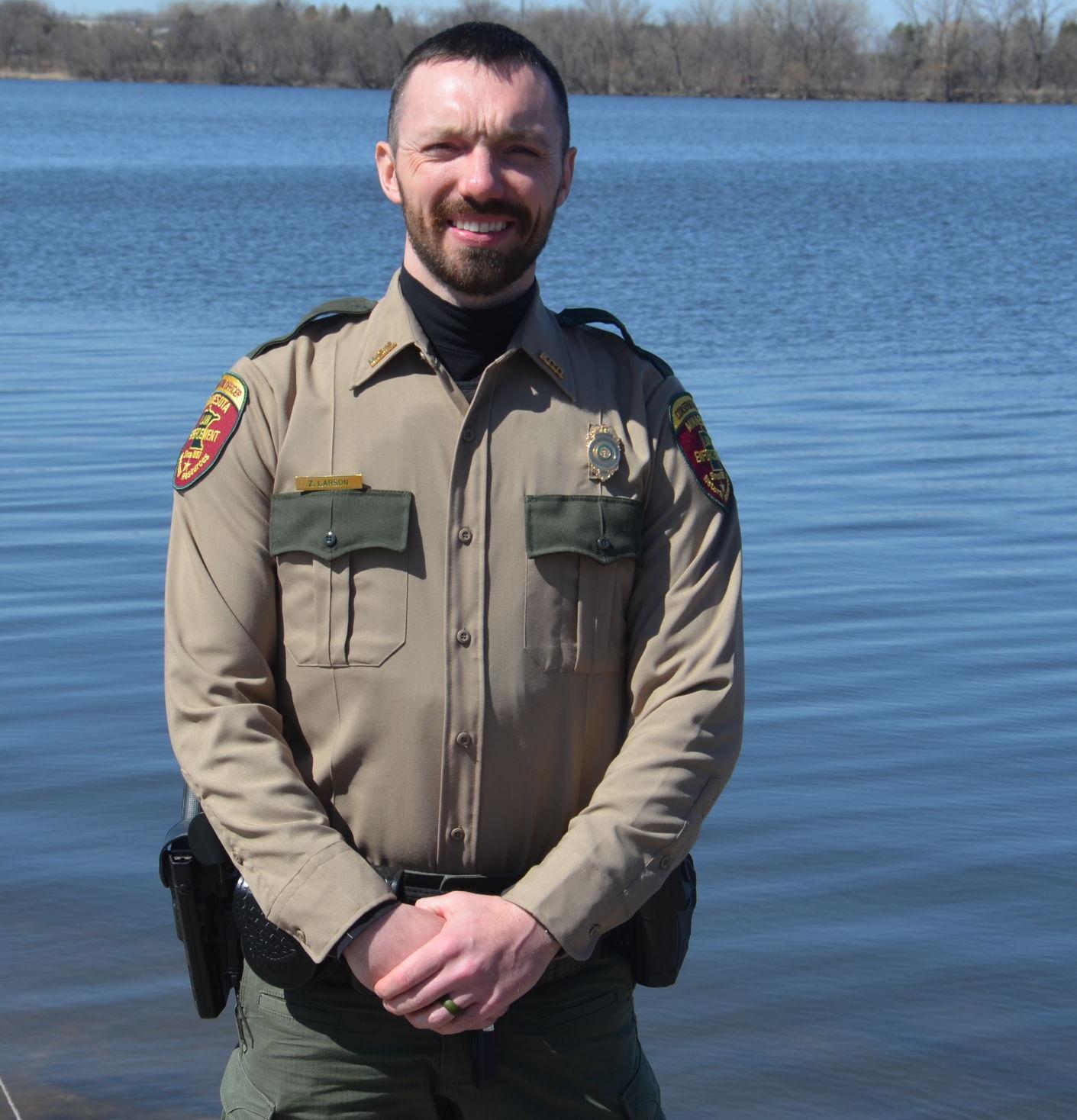