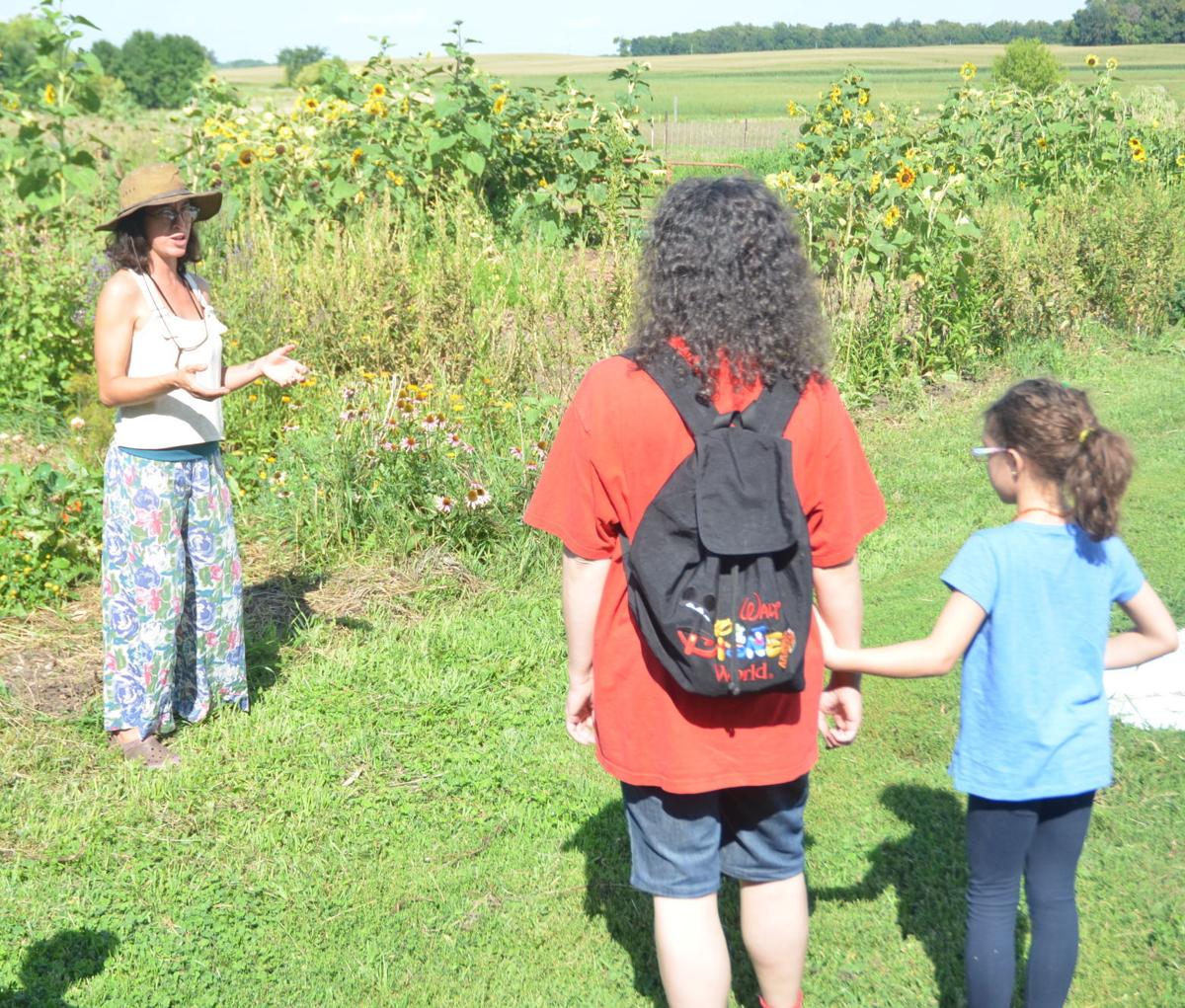 Stephanie Zetha, left, one of the owners of New Story Farm, north of Hutchinson, gives visitors a tour of the farm and its gardens, and explains what regenerative farming is about. 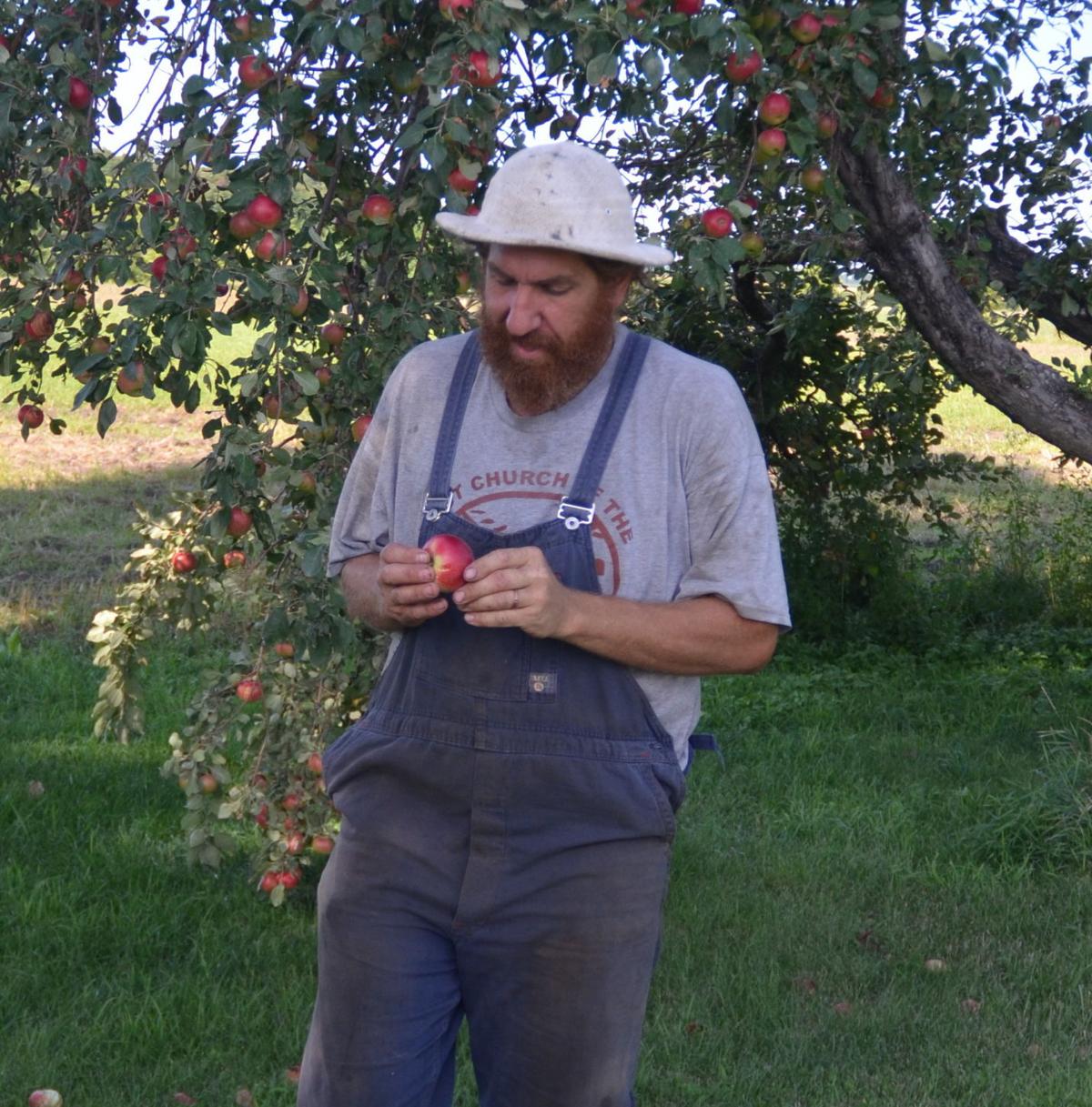 Daniel Zetah, who grew up on his family farm that is now part of New Story Farm, picks an apple from a tree he helped plant as a child. The farm now has several apple trees, which visitors were invited to enjoy. There was a small price, however, as visitors were asked to help pick up the fallen apples and fill barrels that were later used to feed the farm’s livestock. It’s all part of the farm’s educational goal of connecting people with nature and how their food is produced. 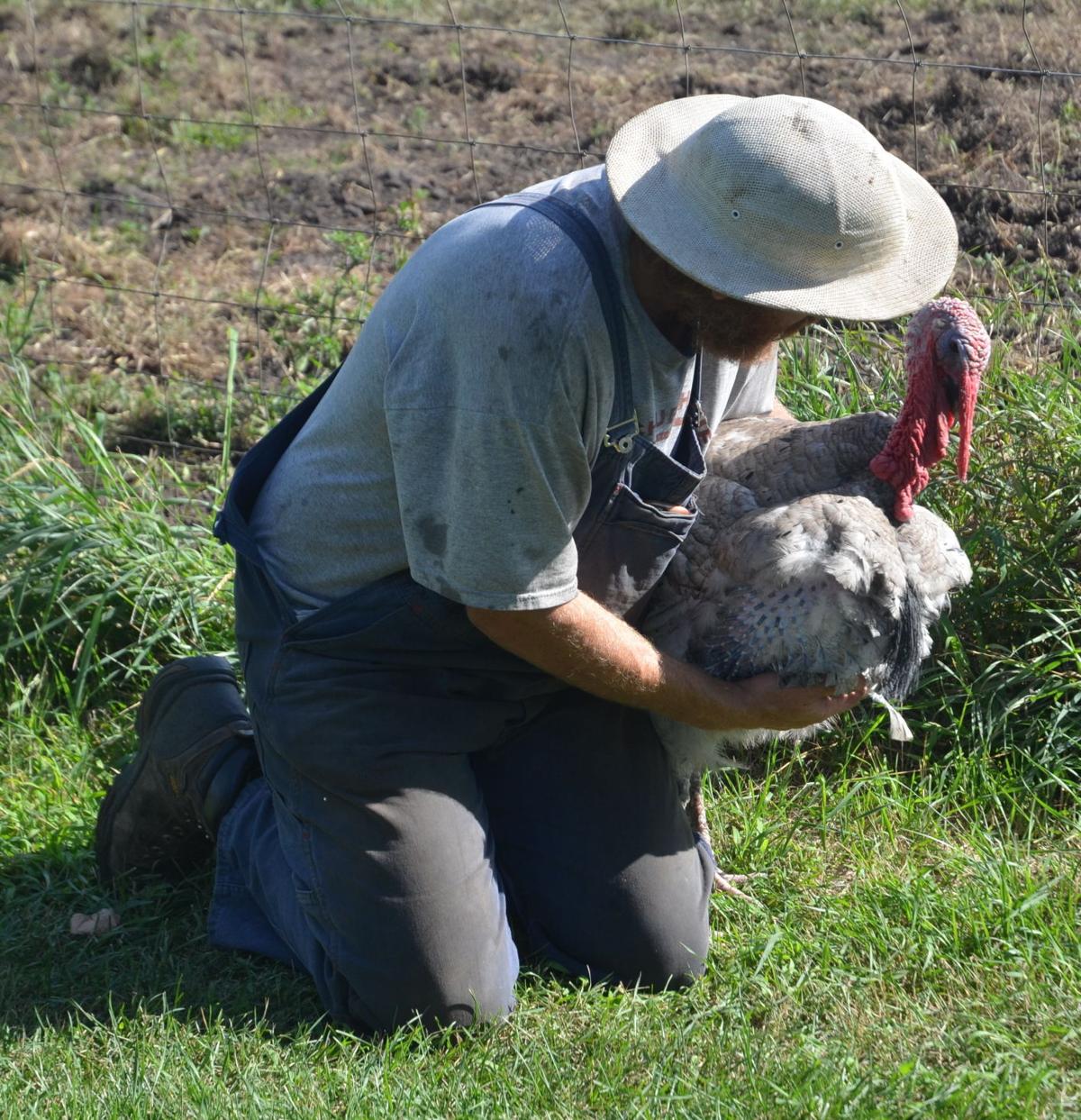 Daniel Zetah gives Tomás the turkey a hug. Turkeys, chickens, pigs and cows are just a few of the animals living at New Story Farm. 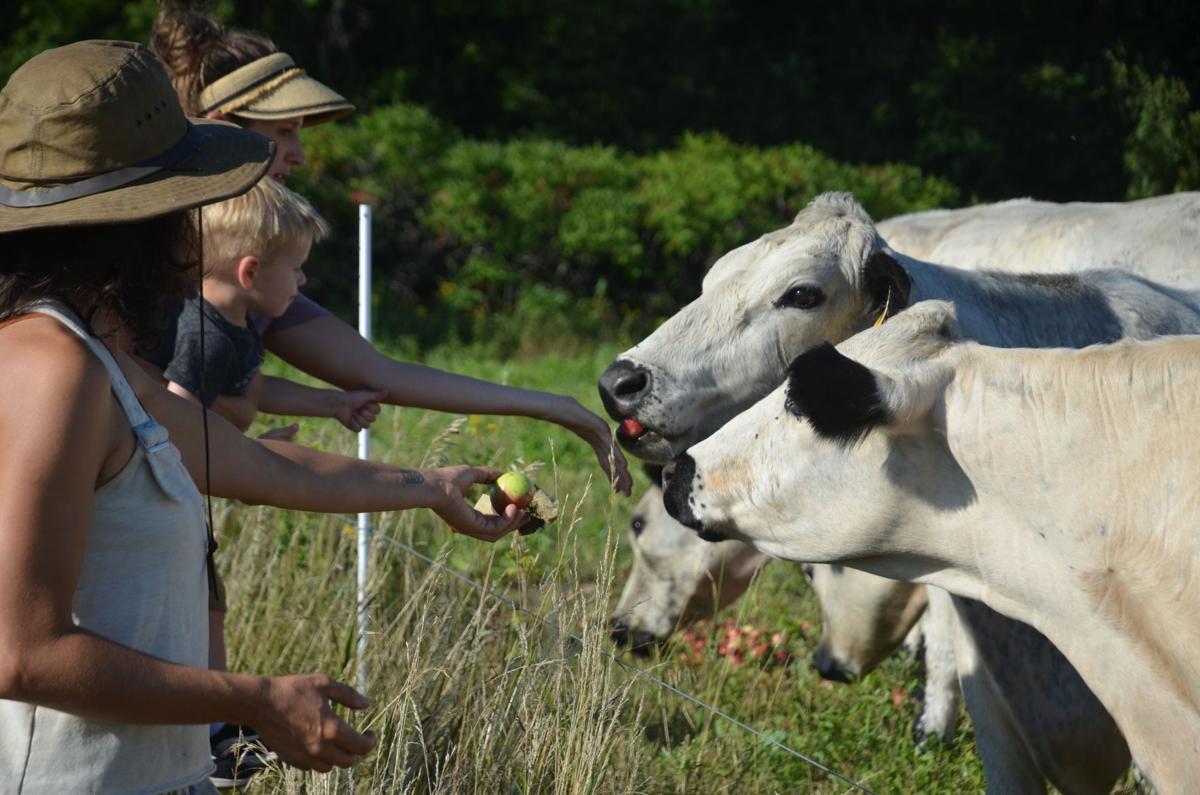 Stephanie Zetah and visitors to New Story Farm help feed cows fallen apples that had been gathered earlier in the day. Feeding the animals and learning more about farming is what draws many classrooms and families to New Story Farm.

McLeod County is filled with farms, and many have stories to tell that in some cases go back 100 years or more. But about 6 miles north of Hutchinson are a couple of farmers hoping to write a new story for Minnesota agriculture. One they say works more closely with ecology and is a natural rebuttal to industrial agriculture.

“I would define regenerative farming as a practice of farming that works with nature rather than against it, and a system that is either closed loop or going towards closed loop where there are no off-farm inputs,” Daniel said. “The way Ecology 101 works is, the waste of one species is the food of another. So everything is part of that ecology, and that ecology is a closed loop in a way.”

Before the two met and started their regenerative farm, they lived very different lifestyles. Daniel worked in food production and as a compliance officer for chemical spraying in Tasmania. Stephanie, on the other hand, grew up in the South and earned a degree in graphic design.

“I had a corporate job and a house and a car and all that stuff, but I was not fulfilled,” she said. “I didn’t know what I wanted to do, but I knew that 10 years of that was enough, and I wanted to do something else. So I sold my house, most of my belongings and I went searching for something.”

What she found was an intentional community in North Carolina, and that is where the two met. As part of the community, Stephanie’s job was to help with a small veggie garden to feed members of the community, and that was when she discovered her interest in farming.

Eventually, Daniel brought Stephanie back to the farm where he was raised. Although she was hesitant at first, she quickly saw the potential in Minnesota soil.

“All of my farming experience up to that point was down South, where the soil is quite depleted and it’s really heavy in clay, so one must work quite hard to grow even the simplest of things,” she said. “So he brings me up to Minnesota, he leads me out to the pasture and digs down about a foot and he brings the soil up to my face and I say, ‘Wow, this is amazing. This is compost, did you make this?’ And he just chuckled and said, ‘No, this is the soil here.’ And I was like, ‘Wait, this is natural? I did not know soil existed anywhere in the world that looked like compost without human intervention.’ And then he explained that the whole farm is that way, and it goes down several feet, and a lightbulb went off, ‘Oh my gosh, this is where you’re supposed to farm.’ Minnesota is where you’re supposed to farm. The soil is just begging for it, and you don’t have to work as hard.”

And so the couple moved to Daniel’s home and began planning their farm. But unlike some farms, they had a different goal to work with nature.

Regenerative agriculture focuses on conservation, topsoil regeneration and biodiversity, among other things. Some of the practices of a regenerative farm are utilizing farm waste and adding composted material from sources outside the farm, which the Zetahs do through an agreement with a local grocery store. They receive produce that the store deems no longer suitable to sell, and they use it for compost or feed if it is not rotten.

It's all part of reducing waste and creating a closed-loop ecology on their farm.

Along with their focus on regenerative farming, the other important part of the Zetahs’ mission is education. They want to teach people, especially children, about where their food comes from, how it’s produced, and how to be good stewards of the planet. They hope their little farm in McLeod County can help start a new story for the future, which is where the farm gets its name.

“We’re trying to create a different story so people can envision something else,” Daniel said. “I tell people a lot of times, if I asked you to name five post-apocalyptic novels or movies, you’d be able to rattle off five in a matter of a minute. But if I asked you to list five utopic novels or movies, you’d have a really hard time. It seems like humans have a really difficult time imagining a future where we’re not eating each other or destroying everything on the planet. If we have that lack of imagination toward a future that isn’t post-apocalyptic, then how are we ever going to get anywhere other than that?”

You can go online to newstoryfarm.com to learn more about these public gatherings, the Zetahs, their farm and their mission.

“If we don’t share this and we don’t try to help people understand how to connect more to nature and where their food comes from, it seems a bit hollow,” Daniel said.