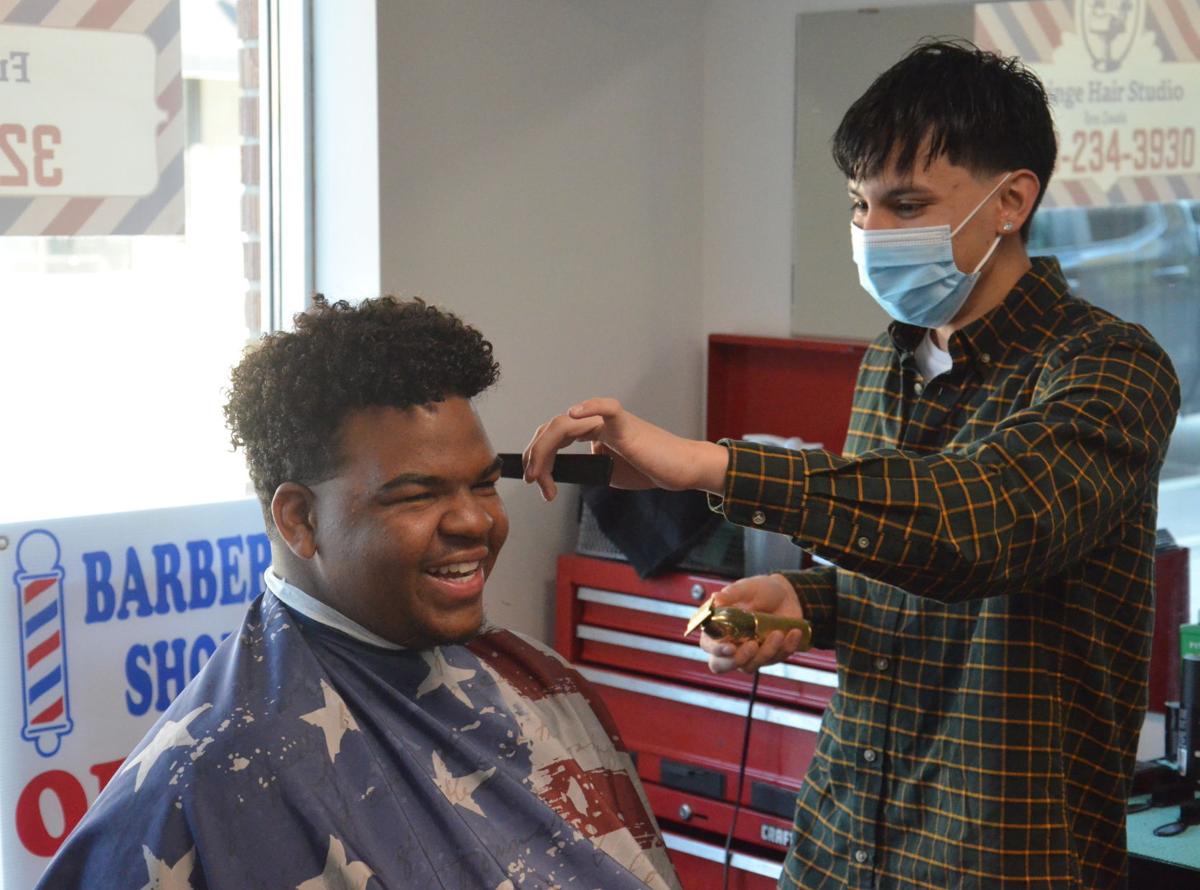 Tony Zavala, right, cuts the hair of one of his longtime clients, Jordan Titus. Titus has been going to Zavala for haircuts since he was clipping hair in his garage in high school, but now he goes to Fringe on Main Street, where the 22-year-old licensed barber has his own booth. 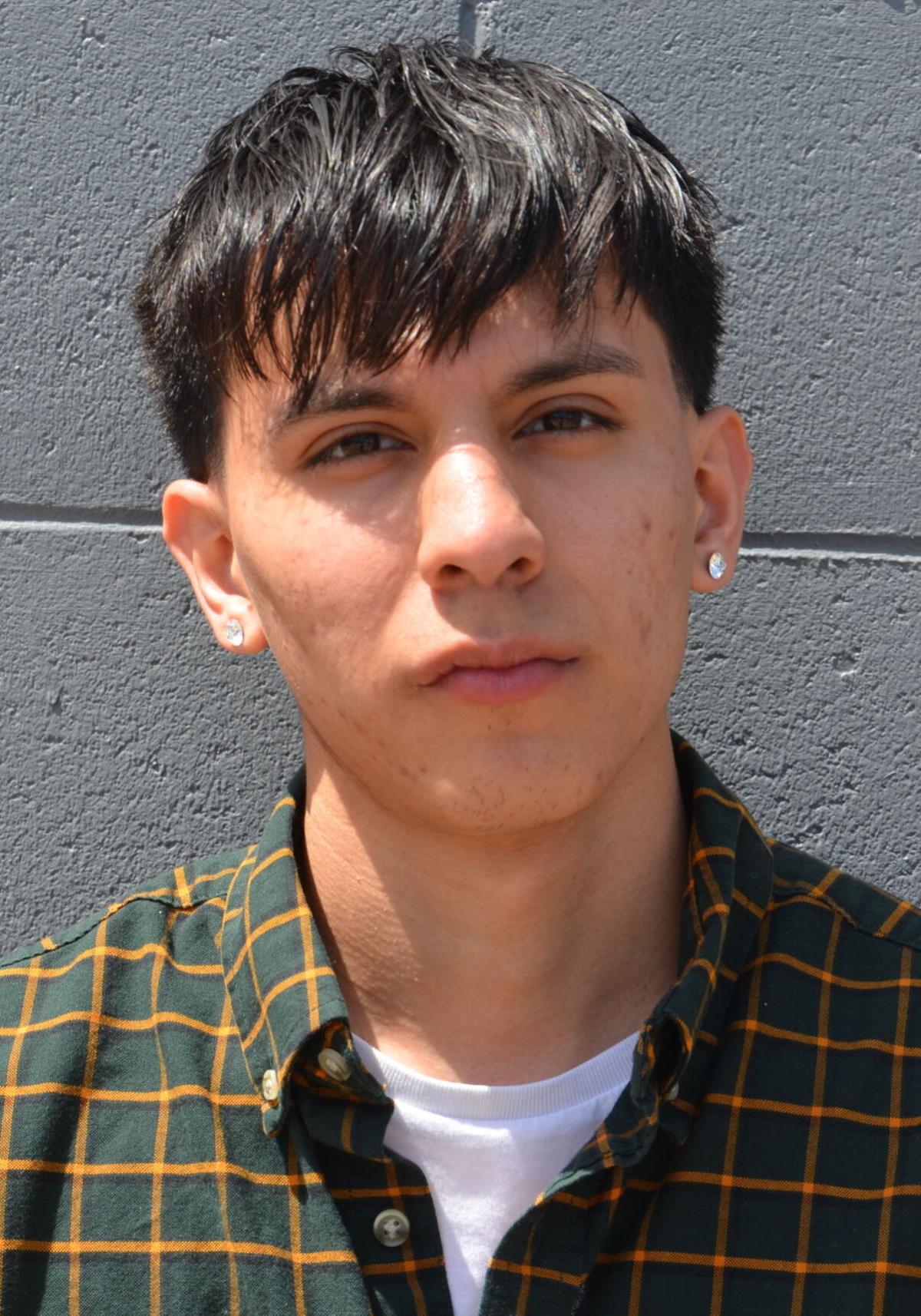 If the 2020 COVID-19 shutdown taught us anything, it’s that we shouldn’t try cutting hair ourselves by watching YouTube videos. Unless of course you’re Tony Zavala, Hutchinson’s newest 22-year-old barber who prides himself on staying up on all the latest trends for men’s hair and facial hair.

Zavala, who earned his barber’s license last year, started working at Fringe on Main Street in April. But anyone who went to school with the 2018 Hutchinson High School graduate knows he’s been keeping friends and family fresh for years.

“I first started cutting hair my freshmen year of high school,” Zavala said. “The reason why I started cutting hair was because my brothers would always get a haircut every week, and nobody would cut our hair like the way we wanted. So I was like, ‘Man, let me go get a clipper and I’ll cut it.’”

What started as a way to help his family turned into a passion. Zavala was self-taught, watching YouTube videos and inviting friends over for free haircuts. As he continued to cut hair and get better, his work eventually caught the attention of Denise Schramm, the owner of Fringe who had a daughter in school with Zavala. She first met the young prodigy about four years ago.

“I thought, holy cow, you haven’t even been trained yet, and he was really doing a good haircut,” Schramm said. “With no training, just from watching videos. And I was like, ‘You’re going to go to barber school, learn some tricks, and you’re going to do fabulous.’”

Jordan Titus, a high school senior and one of Zavala’s faithful customers, can attest to his skills.

“Tony’s just got that little bit of everything,” Titus said. “He can cut any type of hair, any texture of hair, he can fade, he can blend.”

By his junior year of high school, the word was out and Zavala was cutting hair out of his garage on a daily basis.

“I didn’t have a job my junior year, I would just cut hair,” he said. “That was my side hustle.”

That’s when Zavala began to seriously consider becoming a professional barber. After graduation, he took off a year to work and make money, and then in 2019 he enrolled in barber school. That’s where he found out he still had a lot to learn.

“When I started barber school, I realized I didn’t know anything," Zavala said. "I was doing everything the opposite. It expanded my imagination on how to cut hair. You have to visualize a haircut before you even start. I didn’t get that before I went to school.”

One of the most important things Zavala said he learned at school was that you have to use your imagination.

“It’s more like an art,” he said. “It’s a drawing in your head that you have to put on somebody’s head.”

After finishing school and earning his license, Zavala set out to find a barber shop to work in, but options were limited in Hutchinson. That’s when he reached out to Schramm again to ask about setting up his own barber station in Fringe. Schramm liked his work ethic, but she and the other Fringe stylists had to make sure he would be a good fit.

“We all interviewed him, one at a time,” Schramm said. “Everybody is self-employed, everybody is their own boss, but there are six of us now and we have such a good thing and everybody gets along so good. Everybody helps grow each other, and we have to make sure someone fits. Because if you get that wrong fit it’s not good.”

Zavala passed the interviews, Fringe was registered to be a barber shop, and so far it’s been a good fit.

“Guys in the last few years have really gotten into their hair, their beards,” Schramm said. “He’s doing straight razor shaves, so it’s like the warm foam and hot towel around their face. The older guys love it.”

And for Zavala, he’s learning more about the business side of cutting hair, and he’s grateful that what started in his garage has led him to a profession he loves, working alongside people he credits for changing his life.

“These girls, they’re amazing,” he said.

“It’s more like an art. It’s a drawing in your head that you have to put on somebody’s head.”