Forget pinot noir, chardonnay or dessert riesling. Wine sales are falling, while beer, seltzer and liquor sales are trending up, according to Candice Woods, manager of Liquor Hutch.

Woods gave her annual report to the Hutchinson City Council Tuesday, and one of the issues she touched on was the affect millennials are having on alcohol trends throughout the country. That trend includes more demand for low-calorie, low-carb products, and less demand for wine.

“What we have seen nationwide, especially millennials, the newest age drinking demographic, is they are not all that interested in wine,” Woods said. “They’re interested in the seltzer category, spirits, cocktails, that sort of thing.” 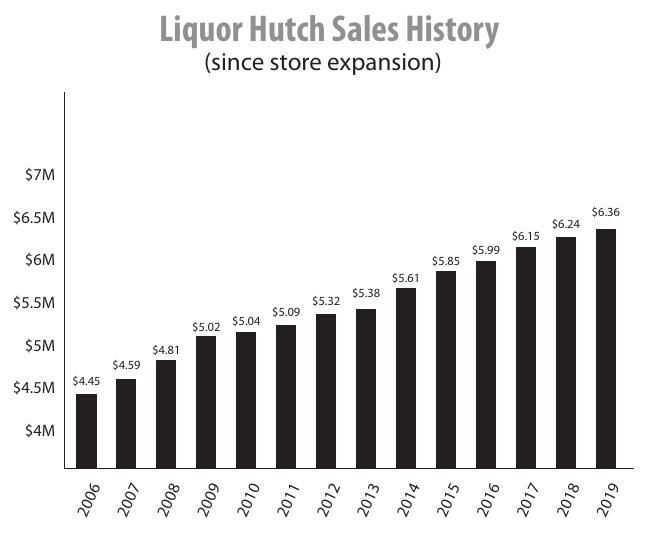 Although the store made more sales, its gross profit in 2019 was $1.61 million, a 1 percent decrease from the year before. That’s because the profit margin on beer and seltzer is less than that of wine.

“This is also a product of that switch in the demographics and what they're purchasing,” Woods said.

Woods also credits the decline in gross profit to the store’s new loyalty program, which has about 4,569 members.

Despite less profit, the store met its goal with a 25.32 percent gross profit, and for a third straight year it transferred $500,000 to the city’s general fund. Since 2006, Liquor Hutch has transferred a total of $5.87 million.

According to the Minnesota State Auditor’s analysis of municipal liquor stores in 2018, Liquor Hutch ranked 11th by gross sales among the state’s 190 stores, and second among outstate stores.

This is an important year for Liquor Hutch, Woods said, because 2020 is the final year of debt service for the store’s 2006 expansion. That means starting in 2021 the store will have additional profits, but Woods said a plan is being developed to identify operational and facility needs for the next 10 years.

“We’ve been fortunate because with the remodel we’ve been in good shape for a long time,” Woods said, “but we’re coming up to those times when we have to look at refrigeration needs, lighting needs, facility, painting, those types of things.”

“One of the things we’re dealing with on a consistent basis is that our hourly wage is not as competitive as it should be for part-time employees,” she said. “So we need to review that and look at the competition in the community around the area.”

Another issue Woods discussed in her report is the sale of 3.2 percent products.

As of November 2019, Minnesota became the last state in the country with 3.2 percent beer laws. Those laws restrict some establishments such as grocery and convenience stores from selling products that contain more than 3.2 percent alcohol by weight, which is equivalent to about 4 percent alcohol by volume. While some would like Minnesota to join the rest of the country, Woods urged the City Council to continue lobbying for current 3.2 regulations.

“We need all of your efforts, any time you see anyone you can talk to about the fact that the city of Hutchinson opposes (changing the law),” Woods said.

The council, for its part, includes its support of the current 3.2 laws in its list of 2020 legislative priorities. A change in the law would likely affect the profits of Hutchinson’s municipal liquor store, but the council also believes it is a public health issue.

While there has been some concern that manufacturers will no longer make 3.2 products, Woods said that isn’t true.

“There’s a lot of media and attention being paid to the fact that 3.2 percent beer is going away,” she said. “I wanted to clarify a little bit for everybody, 3.2 percent products are not going away. We actually have more than ever in (Liquor Hutch).”

“Maybe the labeling by the brewers will go away,” she said, “but the products are still there.”