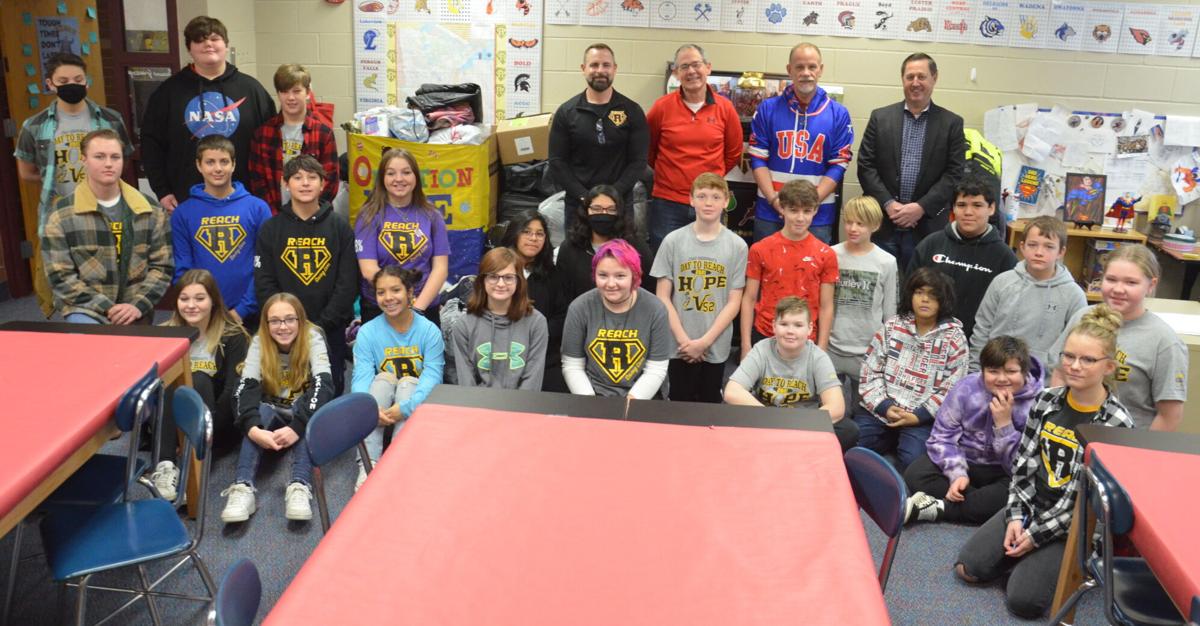 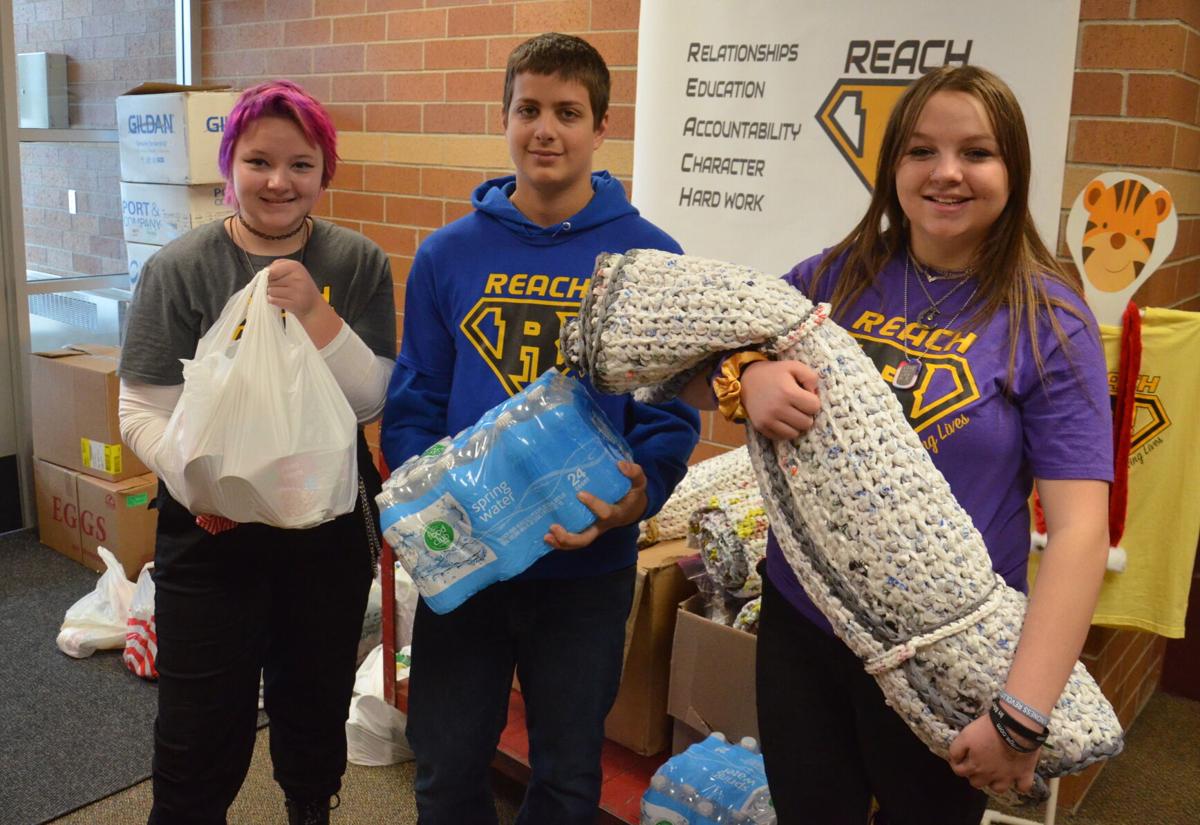 Eighth-graders Annabelle Posusta, Jaydan Bonstein and Miah Hacker hold up some of the supplies middle school REACH students helped gather for homeless people, including ground mats made by veterans who wove plastic bags together. The students collected so many supplies they filled a corner of the classroom and spilled into the hallway. 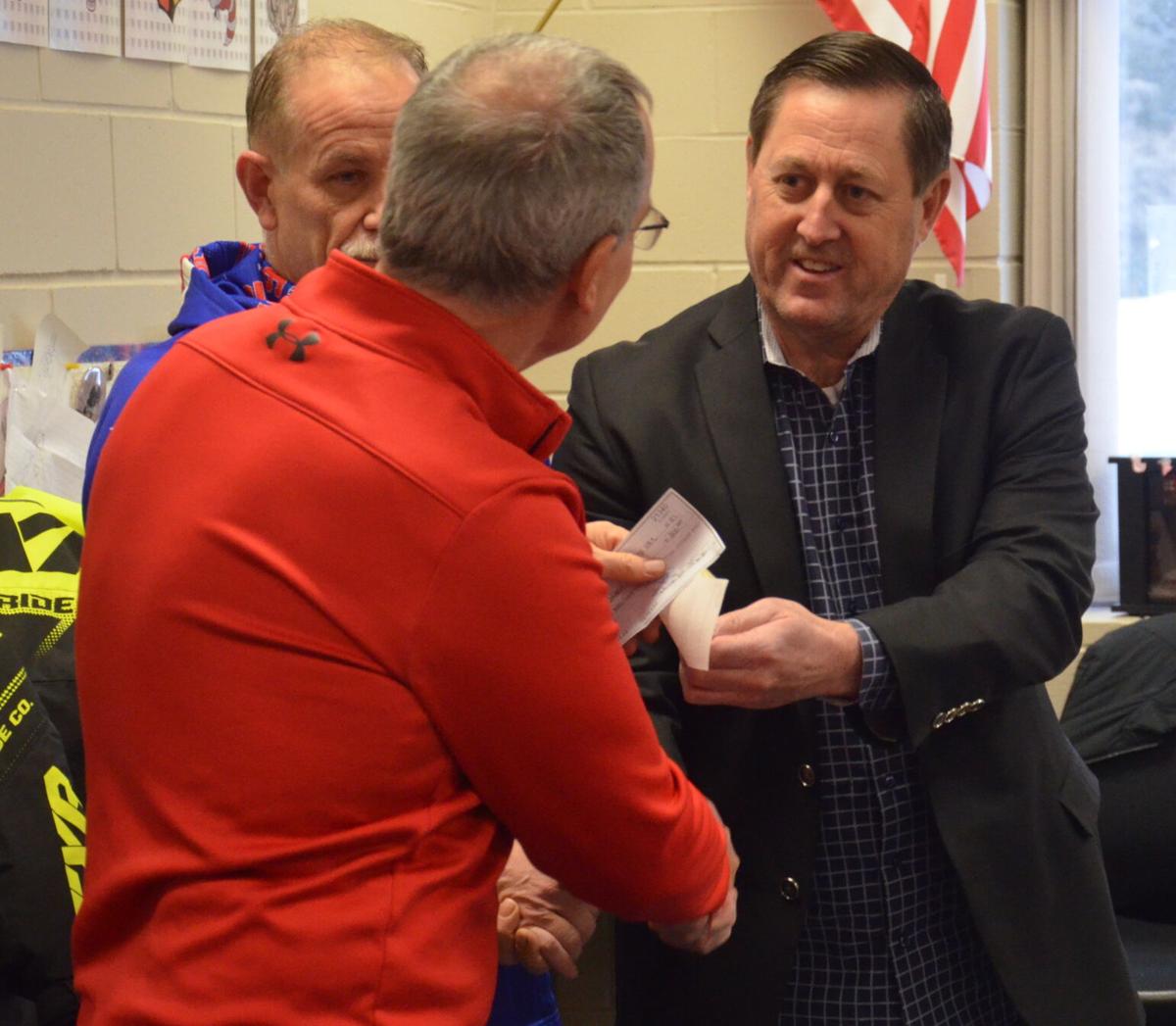 Eighth-graders Annabelle Posusta, Jaydan Bonstein and Miah Hacker hold up some of the supplies middle school REACH students helped gather for homeless people, including ground mats made by veterans who wove plastic bags together. The students collected so many supplies they filled a corner of the classroom and spilled into the hallway.

Since the REACH program was founded at Hutchinson High School 14 years ago, the goal has been to teach kids not only life lessons about relationships, education, accountability, character and hard work, but also about acts of kindness and treating others with empathy.

So when the program was expanded to Hutchinson Middle School this year, the mission didn’t change, just the age of the students.

“Early intervention is key in so many areas,” said Chad Harlander, REACH director. “I think by teaching that act of kindness with our kids at the middle school level, they’ll have that foundation built, and when they get to the high school they just take it to another level.”

REACH students and staff aren’t just satisfied with learning to be kind, however. They want to follow up that talk with action. That’s why this past month the kids at HMS have been gathering supplies for Operation Hope.

It all started this summer, Harlander said, during the Day to REACH football camp. The theme of this year’s camp was hope, and he wanted to carry that into the school year and implement it in the middle school.

“The most important lessons we can teach within REACH and our young people is compassion and acts of kindness,” he said. “Not only to talk about them, but to do it. And our kids were hands-on with Operation Hope.”

The goal was to help HMS teacher Jeff Schmidt with his work assisting homeless people. For years, Schmidt has made regular trips to Minneapolis to meet with homeless people in the Cities. He often brings food, hygiene supplies, warm clothes, blankets and more to give out. But while the people he meets appreciate the gifts, it’s the kindness and recognition of their humanity that they appreciate most, Schmidt said.

“I’m surprised at so many things after starting this,” he said. “I really thought I’d meet people who’d say, ‘Who do you think you are?’ Never. They can see pretty quick that we’re there for a good reason, to simply do something.”

This isn’t the first time REACH has helped Schmidt’s mission. Back in 2017, Schmidt’s Operation Hope received a $2,500 donation from the Chad Greenway Day to REACH Camp. But Harlander wanted to do more this year, so he took it to the REACH middle school students, and when they heard what Schmidt was doing, they were eager to pitch in.

“I thought it was a very good idea because I know many different people who have been homeless or are homeless,” said Jaydan Bornstein, an eighth-grader at HMS. “So it very much impacted me.”

“(Schmidt) has done a lot for them, and I don’t think there are many people who are that generous to go out of their way to get all that stuff for people in the Cities,” said Annabelle Posusta, another eighth-grade student. “I was thankful and excited to help people in need.”

The REACH students began gathering supplies and reaching out to others in the community for donations. They got help from teachers, parents and other students at the the middle school and high school. And then Tim Burley, commander of the Hutchinson American Legion Post 96, heard about the effort and wanted to help.

“The veterans’ mission is the community, always has been. Women, children, we take care of people,” Burley said. “It’s a pattern we learn in life … You don’t need a weapon to serve your community.”

With Burley’s help, Operation Hope was able to gather more supplies with donations from veterans, including a $2,500 gift from the Legion and Saluting Community Heroes. Those checks were presented to Schmidt Wednesday while he spoke to REACH students about his experiences and thanked them for their help.

At the end of the day Wednesday, the piles of clothes, food and other supplies overflowing out of the REACH classroom and into the hall were loaded into a truck for Schmidt, who will take them with him on his visits to the Cities.

And while those supplies will hopefully bring some comfort to the homeless people of Minneapolis, their acts of kindness have also given HMS students a new appreciation for what they have, and how they can use their gifts to bless others. It’s a life lesson Schmidt, Harlander, Burley and others hope they take with them forever.

“It makes me upset that so many people are homeless and have to deal with the cold weather, so I’m very happy we did this Operation Hope,” eighth-grader Miah Hacker said. “I’ve learned to help people and be thankful that I’m able to give people things.”