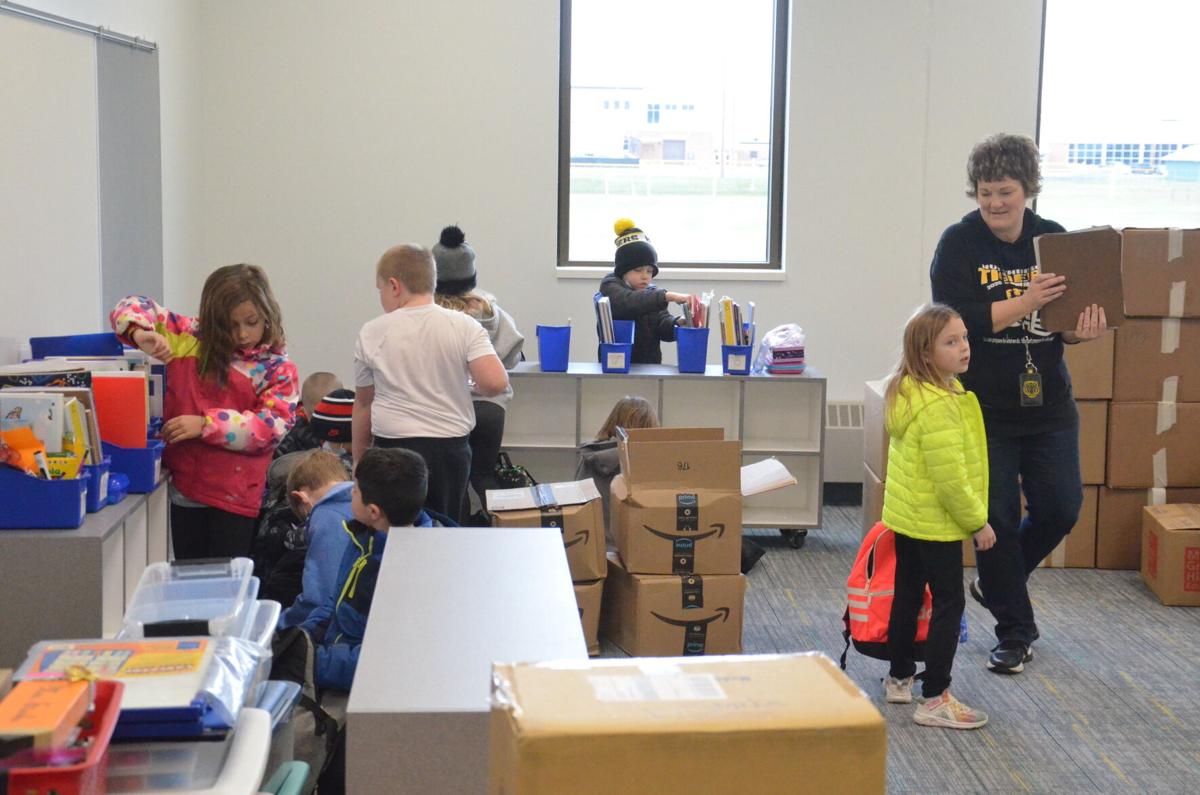 Students in Leah Starke’s second-grade class unpacked items and got settled into what will be their new classroom at Tiger Elementary. Students got to see the new building for the first time Friday, but they won’t start classes there until Nov. 30. 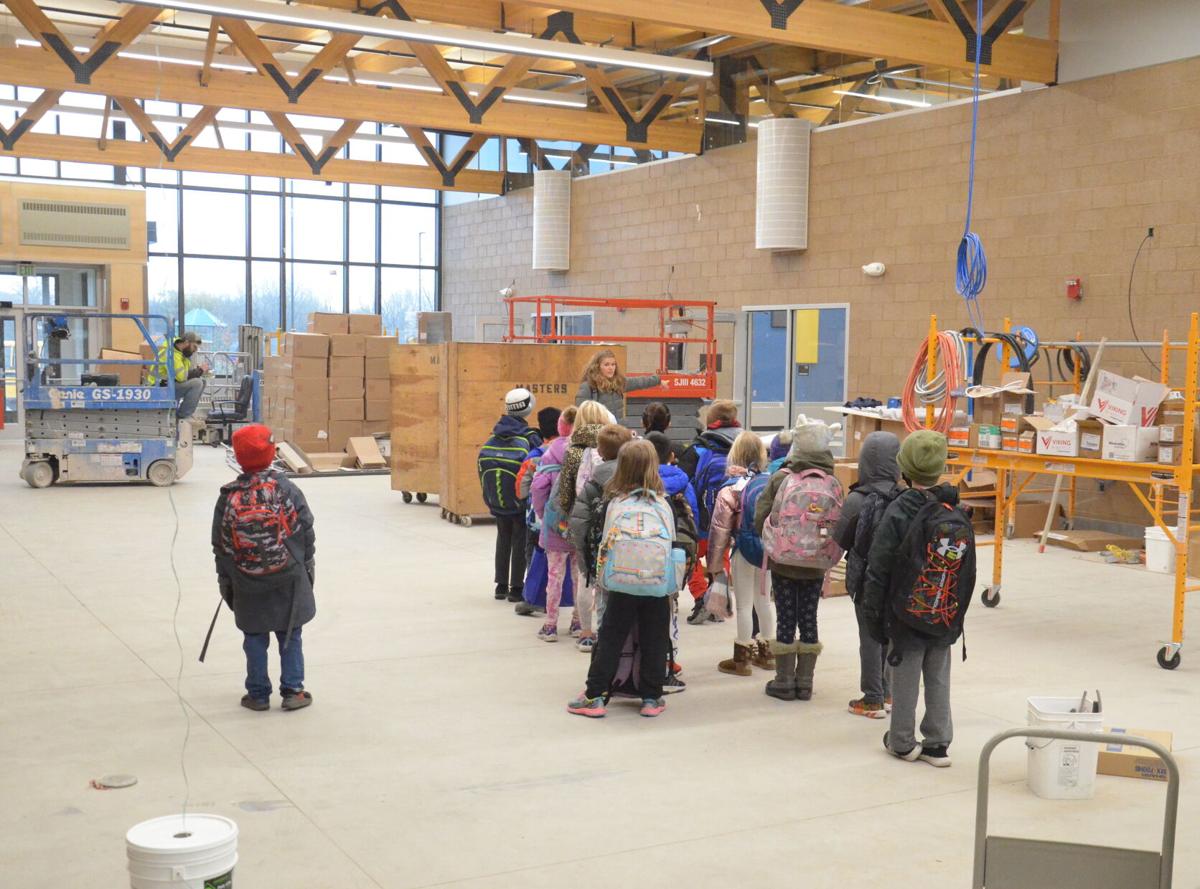 Students in Hannah Starke’s second-grade class stand in the unfinished lunch room at Tiger Elementary. Starke is also pointing out the new library. 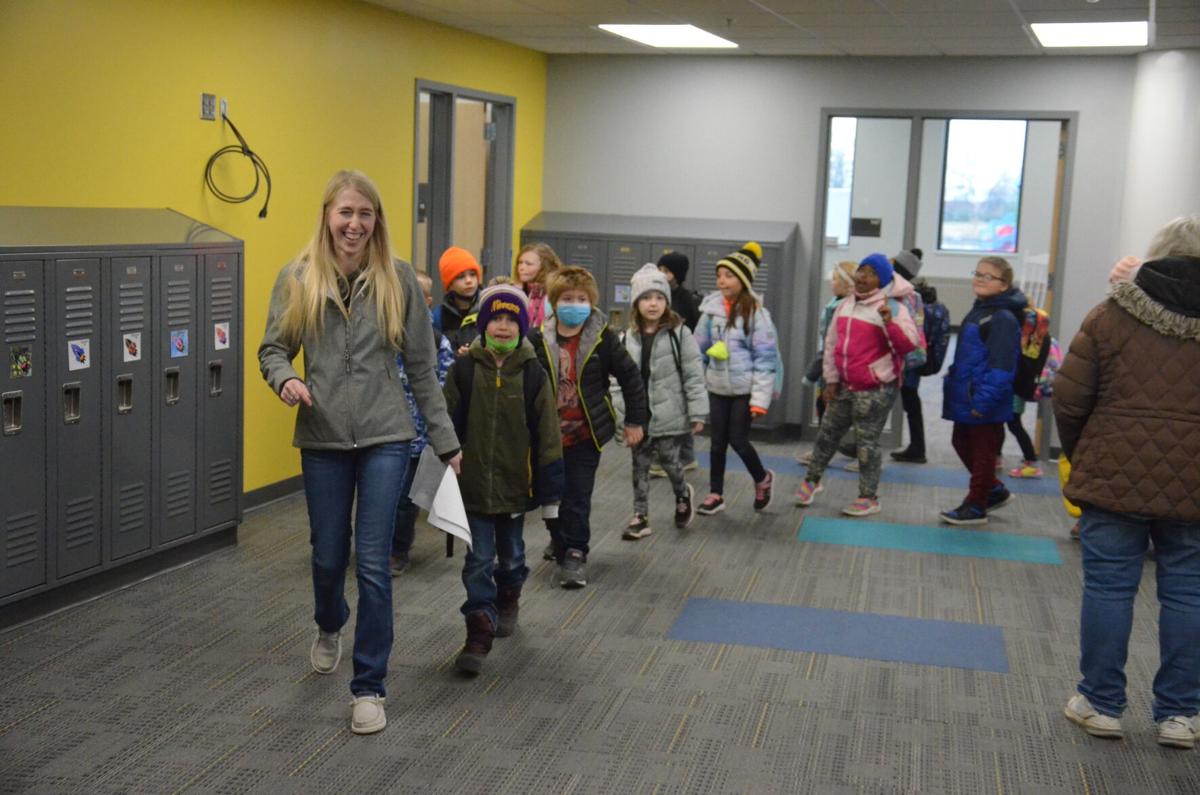 Teacher Jenna Madsen walks through a flexible learning space with her second-grade students during a tour of Tiger Elementary. 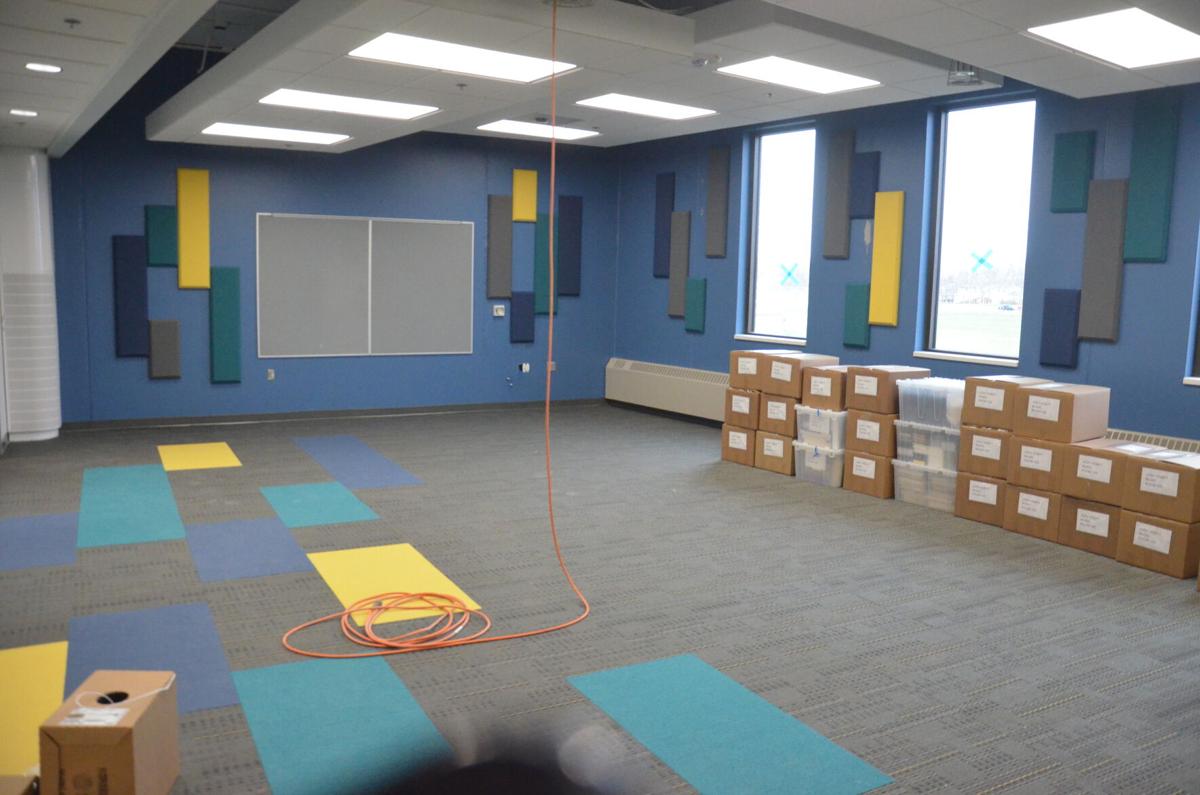 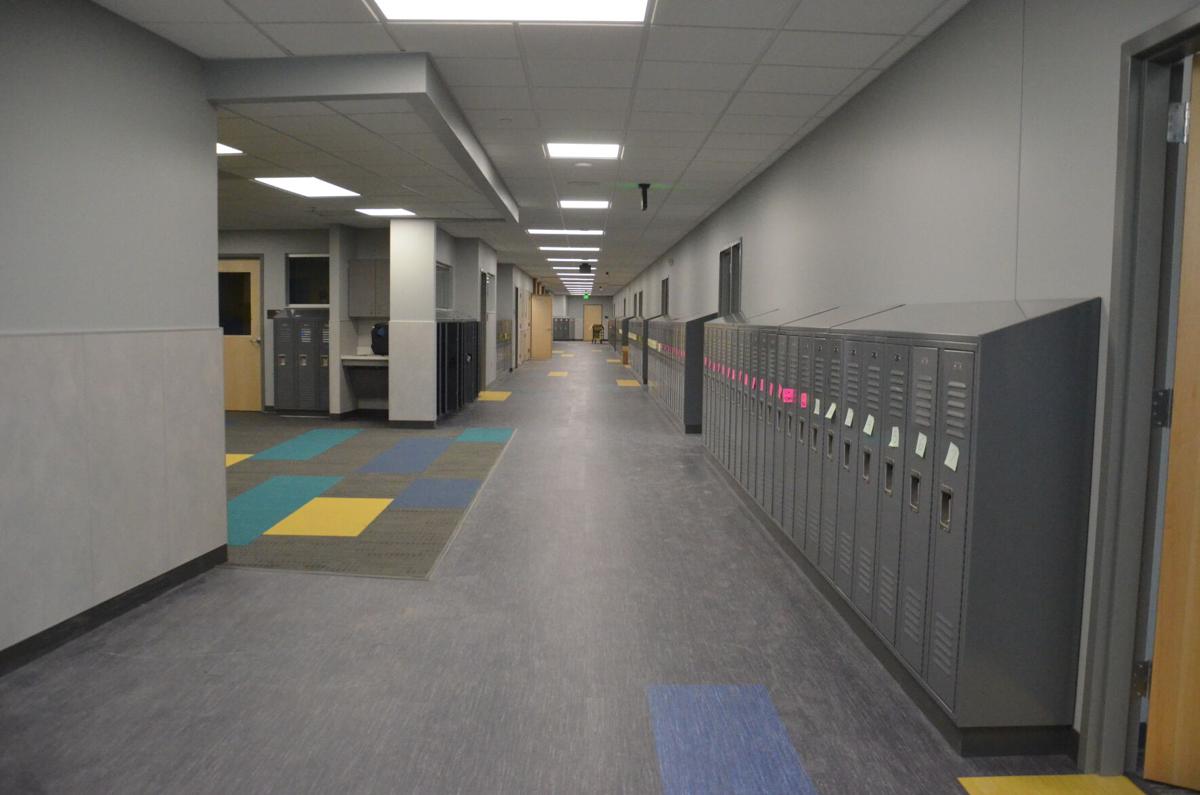 This is the second-floor hall at Tiger Elementary. 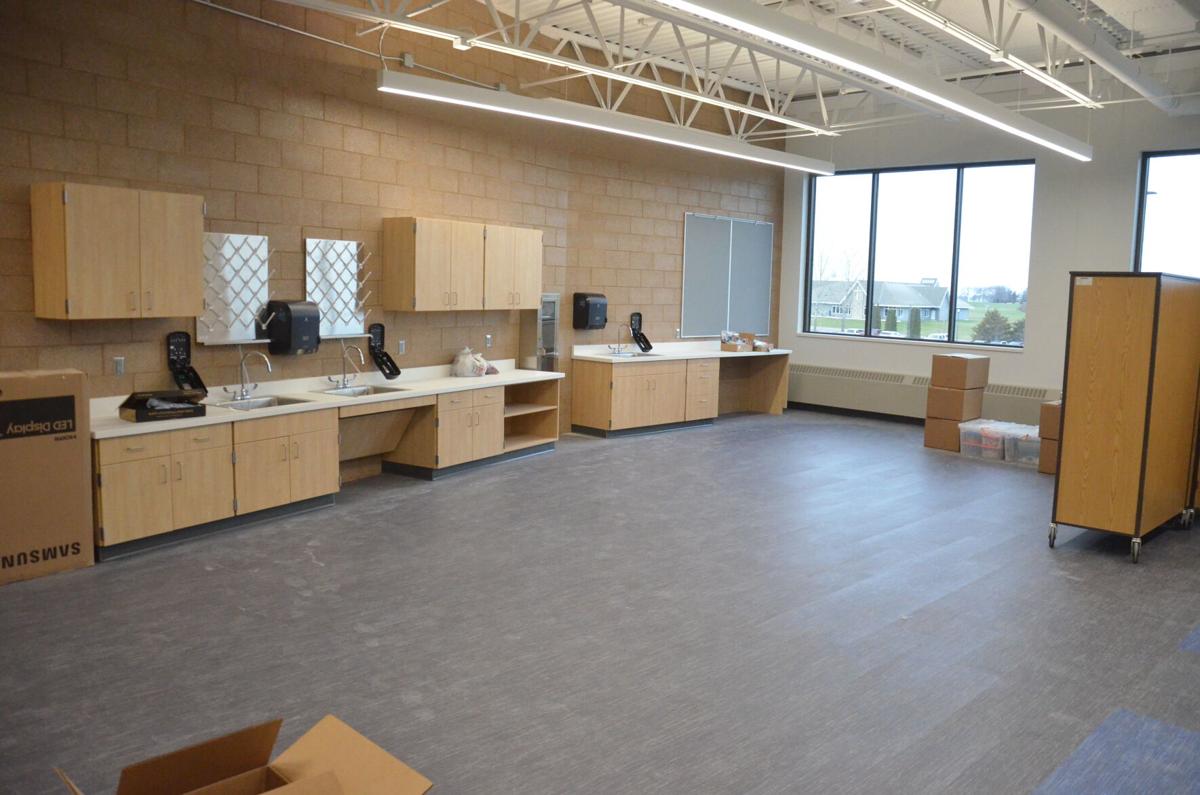 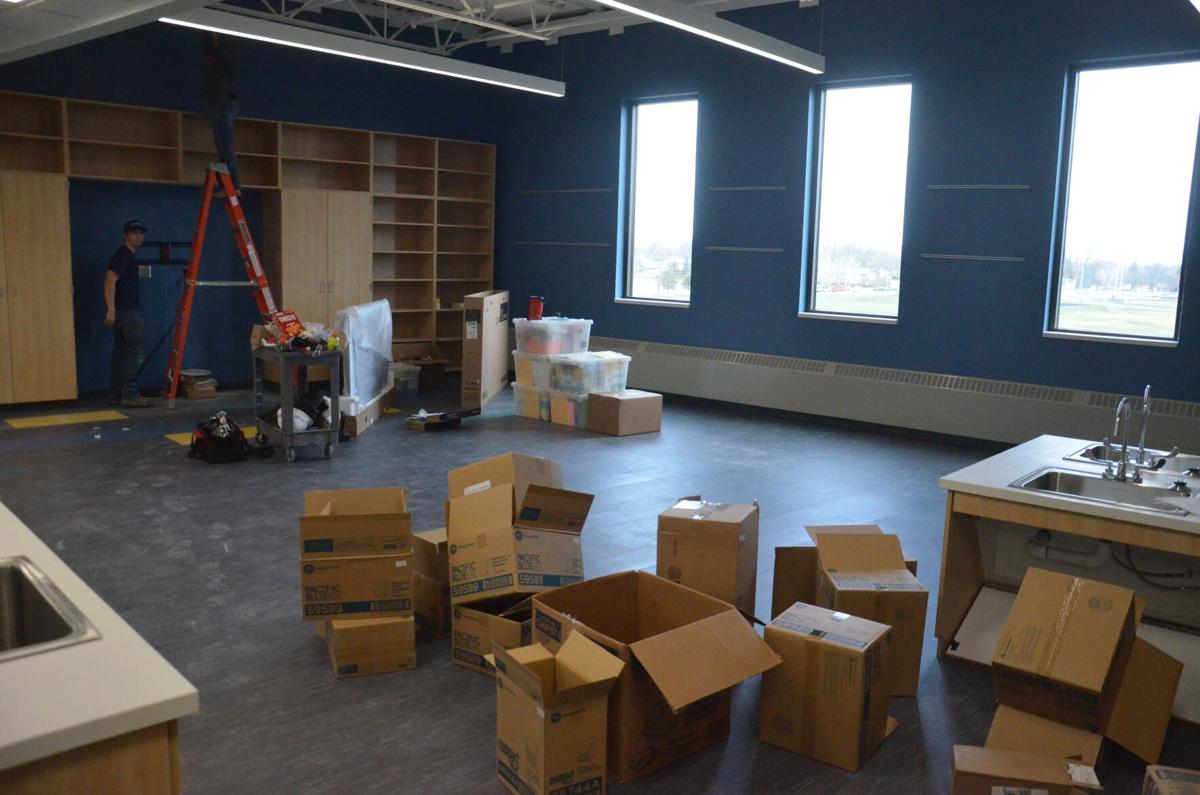 Students in Leah Starke’s second-grade class unpacked items and got settled into what will be their new classroom at Tiger Elementary. Students got to see the new building for the first time Friday, but they won’t start classes there until Nov. 30.

Students in Hannah Starke’s second-grade class stand in the unfinished lunch room at Tiger Elementary. Starke is also pointing out the new library.

Teacher Jenna Madsen walks through a flexible learning space with her second-grade students during a tour of Tiger Elementary.

This is the second-floor hall at Tiger Elementary.

The halls of Tiger Elementary were filled with the “oohs” and “aahs” of some of Hutchinson’s youngest learners Friday. Although work was not quite finished, second- and third-grade students got their first look at the new school building.

It was the last day of class before Thanksgiving for those students. Second and third grade won’t return to school until Tuesday, Nov. 30, when they’ll be back at Tiger Elementary for their first day of learning in the new building. In the meantime, teachers and staff will use those days off to move their classrooms from Park Elementary.

It’s a change that both students and staff members have anticipated since the start of school in August.

“I think everybody is really excited. … I know teachers have been waiting eagerly for this for a really long time, so I’m really grateful to see it all come through,” said second-grade teacher Hannah Starke.

As a former Hutchinson Public Schools student and now a teacher, Starke has the unique perspective of having gone to school at Park Elementary, taught there, and now she’ll be leading classes in the new building.

“I’ve been thankful to go through the school system myself and even go back and teach in one of my old classrooms,” she said. “So it’s very nostalgic. Some of it’s very bittersweet, leaving something that’s been here for so long. But for me, being a newer teacher, I’m really excited about teaching in a new building and establishing myself and the Tiger Elementary culture and being a part of that.”

In a classroom next to Starke is another second-grade teacher who’s been waiting a bit longer for this change. Sarah Smith has been teaching at Park Elementary since 2001.

An important part of making the move for teachers has not only been preparing their classrooms, but preparing their students as well. With big changes can come feelings of anxiety and worry about an unfamiliar place. Part of Friday’s trip to the new school was to show kids where to go when they arrive for the first day Nov. 30.

“Some of them are worried about where do I go on the bus, where do I get off the bus, am I going to have the same teacher, that sort of thing,” Smith said. “So we’re trying to keep things really regular for them. And we talk a lot about their feelings and that it’s OK to be nervous. But they’re excited.”

For their parts, the kids had plenty of energy and excitement as they walked the halls and were given a tour of the new building and their classrooms. Harper Ullom, a second-grader, really liked how large the classrooms are, while August Buckentin, another second-grader, was impressed with the outdoor features.

“I think that’s going to be a cool community-building experience,” she said.

She and other teachers also appreciate that second- and third-grade classes are now closer to each other to make collaboration easier. Second-graders will occupy the first floor of the building while third-graders will be on the second floor.

When it comes to design aspects of the building, some cues were taken from the high school renovation, such as new flexible learning spaces with small group rooms. Unlike at the high school, Superintendent Daron VanderHeiden said he sees those spaces being used differently at Tiger Elementary.

“Second- and third-grade students, you can’t really allow them to learn independently,” he said. “I see adults and specialists and paras and folks like that using these spaces more than probably even the classroom teachers.”

The classrooms themselves are set up similarly and are larger, about 900 square feet, to allow for nontraditional seating arrangements.

“I think the new facility offers a lot of opportunities for teachers to teach and engage kids in different ways,” Tiger Elementary Principal Mike Daugs said. “The classrooms are set up not necessarily to be used like a classroom would have been used in the ’80s, but a lot more open space, a lot more collaborative space, flexible space.”

The use of natural lighting was also an important part of the design, with each room featuring large windows. Specifically, the north light is the most conducive to learning, according to VanderHeiden.

“That’s the best light to learn from,” he said. “You don’t get the glare that often. The worst light is the south or west, so we try to minimize that as much as possible. We have some classrooms like that, but we did some special window covering so we could filter it a little bit.”

The new building also features rooms specifically designed for subjects such as music, STEM and art. While these programs were available at Park, many were limited due to the facilities. The new rooms including sinks and washing areas for art and STEM projects, and more room in general.

“There’s a lot more opportunities for kids with this new building,” Starke said.

Visit hutchinsonleader.com to see more photos from inside Tiger Elementary.