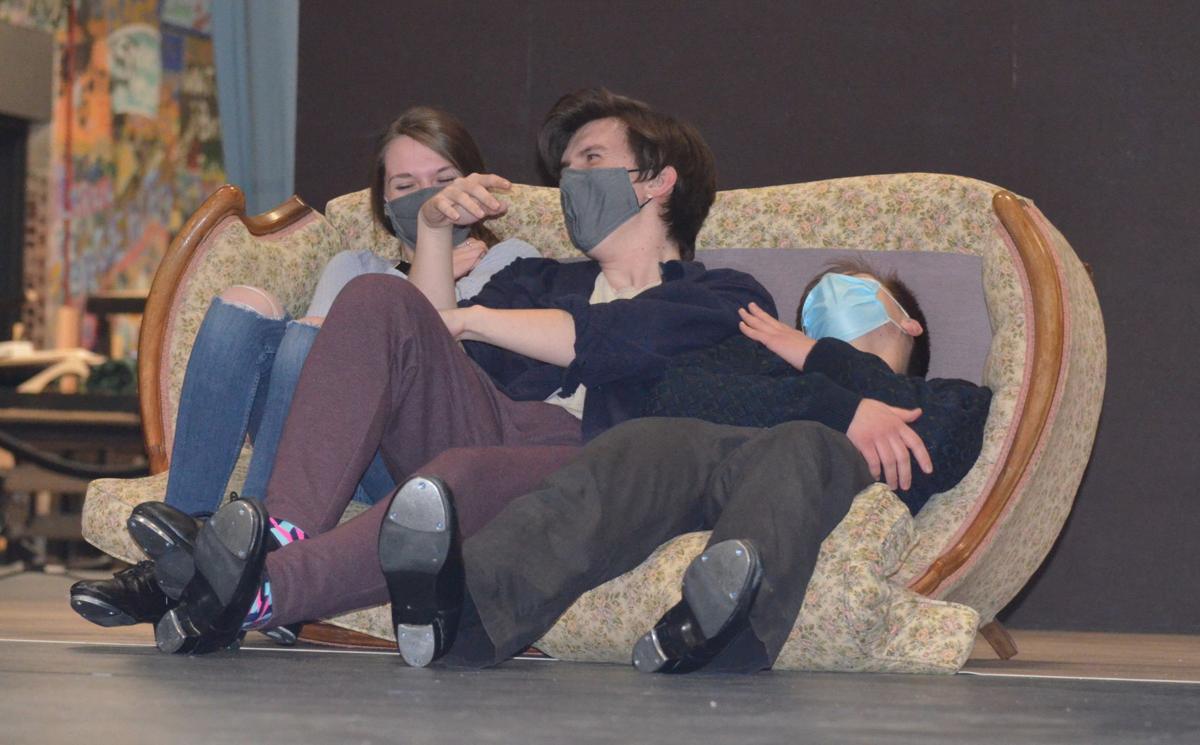 Sometimes inspiration strikes late at night, or in this case, in the early morning. Hollywood performers Kathy Selden, Don Lockwood and Cosmo Brown — played by Lily Schimmel, Landon Butler and DJ Scheele — have a laugh on an overturned couch after performing “Good Morning.” 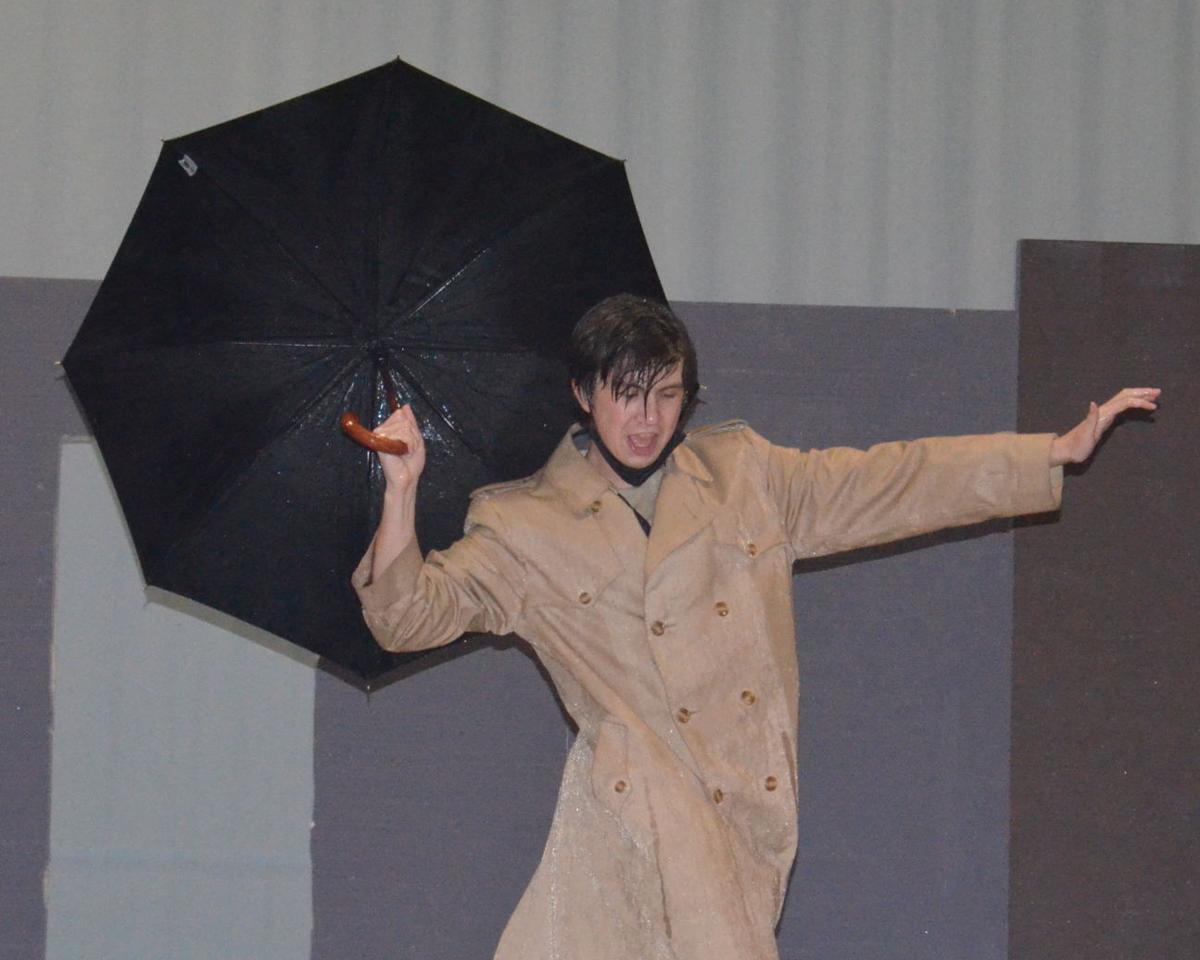 It wouldn’t be “Singin’ in the Rain” without rain. Don Lockwood, played by senior Landon Butler, sings and skips with his umbrella as rain falls from the ceiling in the Hutchinson High School Auditorium.

Sometimes inspiration strikes late at night, or in this case, in the early morning. Hollywood performers Kathy Selden, Don Lockwood and Cosmo Brown — played by Lily Schimmel, Landon Butler and DJ Scheele — have a laugh on an overturned couch after performing “Good Morning.”

It wouldn’t be “Singin’ in the Rain” without rain. Don Lockwood, played by senior Landon Butler, sings and skips with his umbrella as rain falls from the ceiling in the Hutchinson High School Auditorium.

If you pay a visit to the Hutchinson High School auditorium April 7-11, you may want to bring an umbrella; the forecast calls for showers.

Hutchinson theater students are presenting the 1952 musical "Singin' in the Rain,” complete with all the tap dancing and singing fans of the Gene Kelly classic will remember. And thanks to a bit of technical work, they’ll be able to perform the show’s titular song the way it was meant to be shown.

"How can you do 'Singin' in the Rain' without rain?" asked senior Landon Butler, who plays Don Lockwood, one of the lead characters. "It's pretty cool and I hope people will remember it. The lighting is cool on it, too."

"This show is dance, dance and more dance," said director Jason Olson. "Of course, one of the main calling cards is, hey, it should rain."

The show, regarded by some as one of the greatest musical films ever made, is a romantic comedy that follows Hollywood performers trying to adjust during the late 1920s switch from silent films to “talkies.”

"The humor goes along with that," Olson said. "You had former movie stars. When it was silent, they were awesome. All of a sudden they have an annoying voice."

The lighthearted play was selected because it doesn't deal with anything heavy or ask the audience to dig into a serious issue.

"We're dealing with that all the time right now," Olson said. "The idea this year was to have fun. This musical is just dumb fun. Some of the numbers make you smile because they have so much energy."

"Kathy is a headstrong girl who has a path and a direction and she meets this movie star and is apprehensive at first about him," she said. "And then she falls head over heels."

"Don is a silent movie actor," Butler said. "He wants to adapt to the talking picture, and has to deal with all the trials and tribulations that go along with that."

While past HHS shows have had a chorus or large-scale dance numbers, this show calls for several dances between individuals and small groups. That has made for a unique challenge, Butler and Schimmel said. The result is a peppy, upbeat show with plenty of music.

"The show is also really costume heavy," Schimmel said. "We have lots of costumes."

Senior DJ Scheele plays Cosmo Brown, Don Lockwood's lifelong friend. The goofball will do anything to get a laugh.

"I have some pretty demanding dances this year," Scheele said, "doing tricks all over the place, jumping over people, flips on ladders. That will be fun to watch."

In a school year marked by a response to COVID-19 and the safety precautions that came with it, there is no doubt the show has had to adjust in order to meet state guidance.

"It was hard in the beginning to get the ball rolling," Schimmel said. "We had to push it back from being a fall musical."

The call for masks and social distancing means the performers can't work alongside a live band as they usually would, and are instead using recorded tracks.

"That's unfortunate especially for the seniors in band," Butler said. "A few decided to join the cast to still be part of it."

Current COVID protocols allow for 250 people to attend the show, but more than likely tickets will not be available at the door in order to maintain social distancing. Anyone who would like to see the show should purchase tickets online at showtix4u.com/event-details/48912.

Like everyone in the past year, HHS theater students have had to make sacrifices and adjustments, but they’ve made the most of their present situation and are excited to be on stage.

"Even with COVID and having to do remote practices, we've got a really great show," Scheele said. "I'm proud of it."