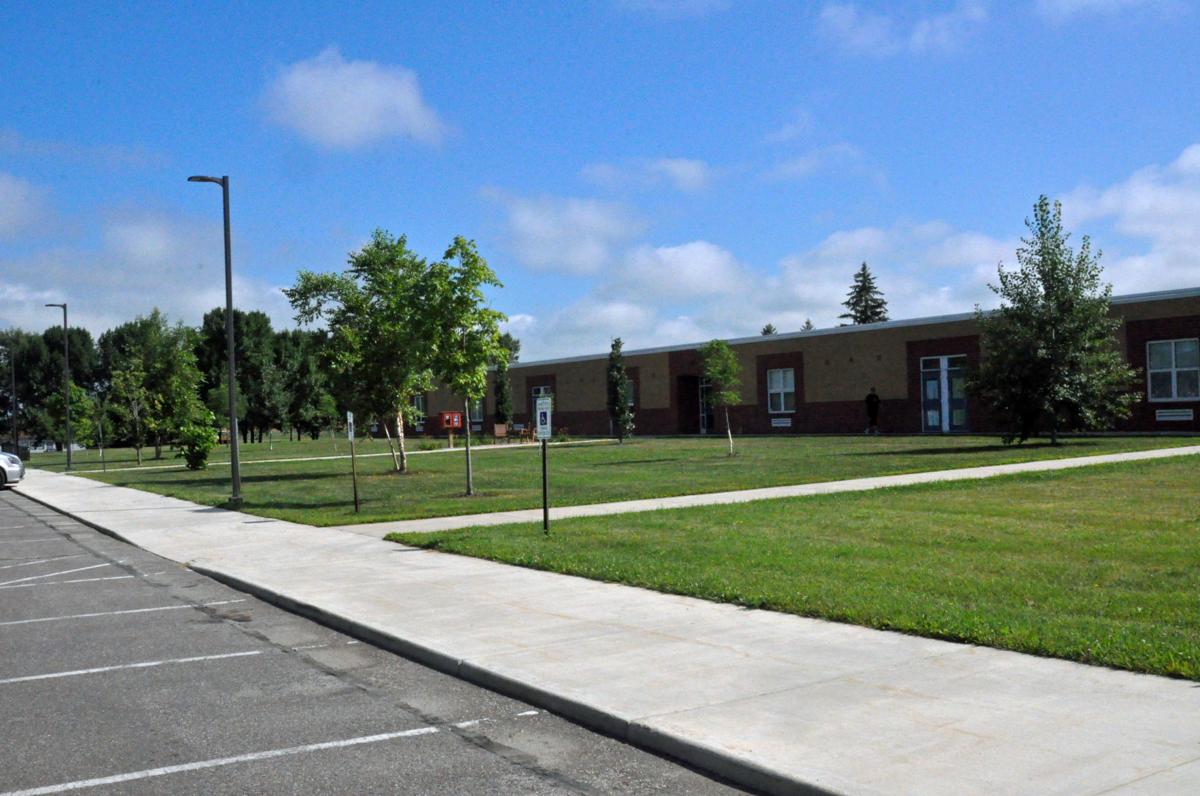 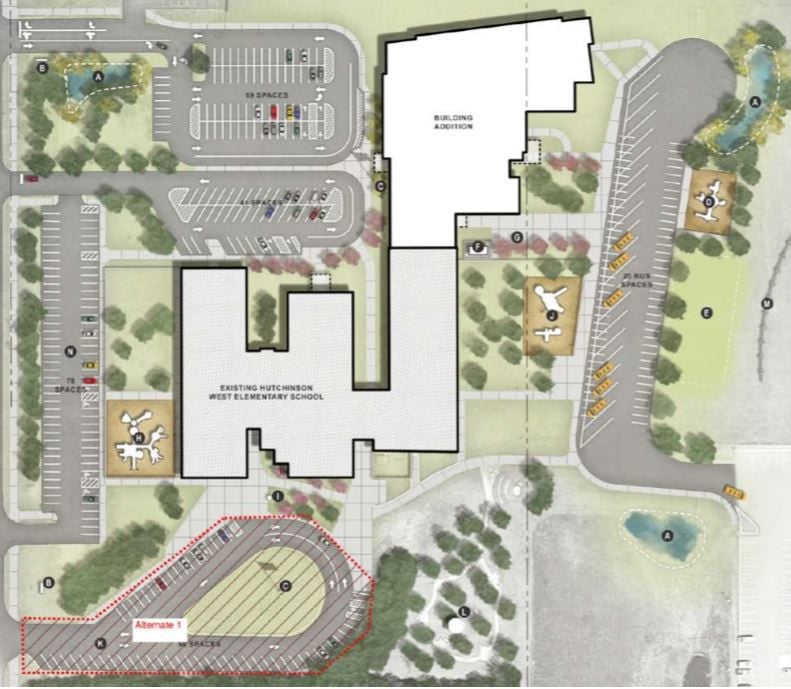 This overhead map shows the blueprint expected for renovations at West Elementary. Hutchinson City Council has asked the school to reduce the number of street access points from four to three. Another planned change is the movement of the northeast pond to a location further away from a playground. 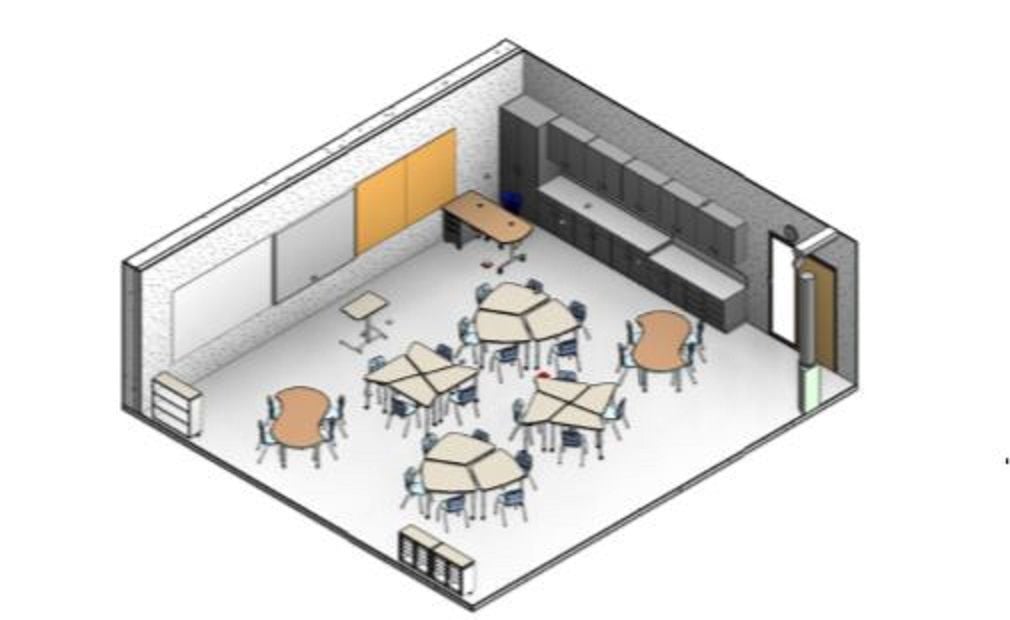 Classrooms at West Elementary are being designed to allow flexible arrangements for group learning. 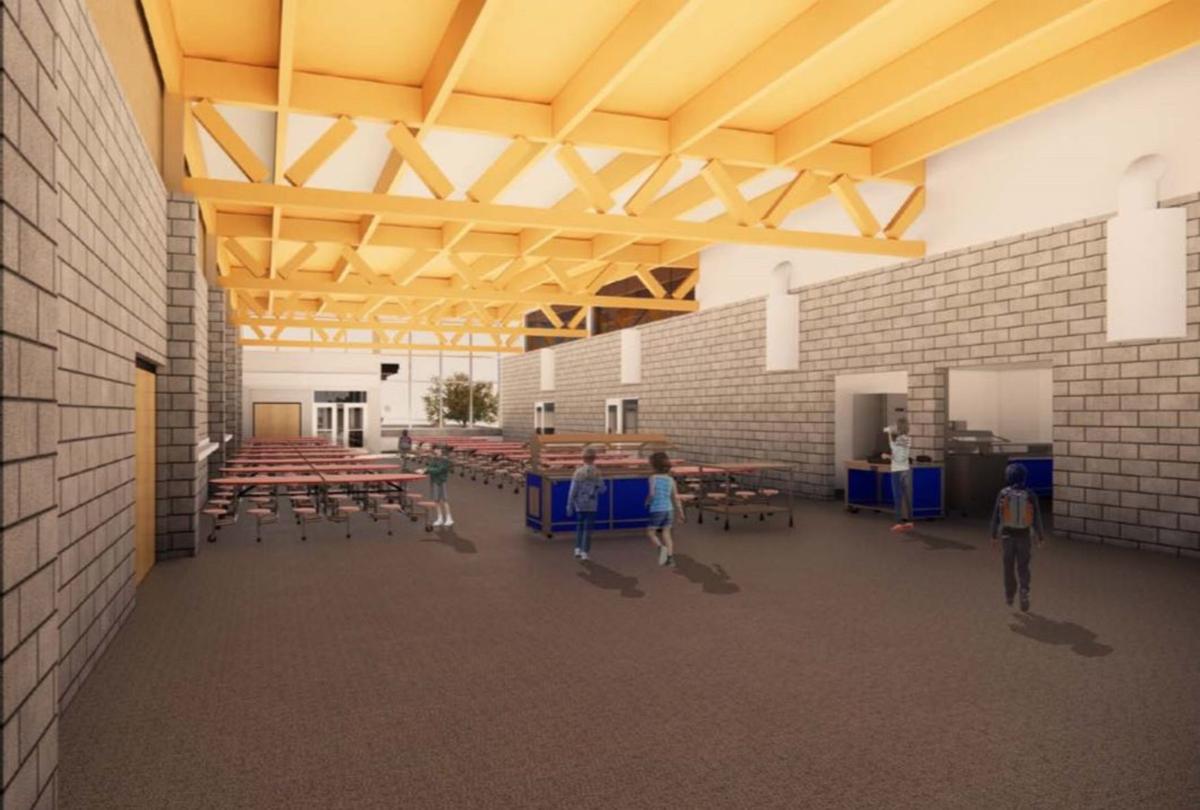 The new cafeteria in West Elementary's planned expansion has an open design similar to the Hutchinson High School commons.

The most recent iteration of plans to renovate West Elementary remained on budget as the Hutchinson School Board agreed to seek bids June 22.

The plan to move second- and third-grade students into a new two-story northeast building section, and keep first-graders, kindergartners and preschoolers in the existing section, is expected to cost about $17.8 million. It is funded as part of a $28.8 million bond referendum to renovate the school's two elementary buildings, which voters approved this past November.

Work on the property is split into two bids. One would focus on site and earthwork, structural steel work, the concrete and precast walls and floor panels. Bids are due July 16.

The second bid would include all other portions of the construction, and bids are due in August.

Construction would begin in September with hopes to move in December 2021.

"We originally wanted it done in fall (2021)," said Superintendent Daron VanderHeiden, "but it depends on supply lines and if we can get everything in a timely fashion. ... We're not sure if the supply lines will be interrupted with COVID."

Plans for the project reviewed recently are similar to a preliminary plan reviewed in April. Construction of two parking lots on the building's current north side is planned. They would be accessible from School Road. One would be dedicated to the second- and third-grade addition, while the other would lead to the special education and Early Childhood Family Education sections.

Previous plans showed the parking lot on the west side of West Elementary as a potential site for renovations leading to a new playground. But the most recent plans keep the parking lot. VanderHeiden said the parking lot was in good shape, and that money had already been spent its improvement.

"That was something we didn't want to have to touch if we didn't have to," he said.

Instead, a smaller playground will be added near the parking lot. It is one of three small playgrounds planned for the property.

"Instead of extending lunch to have more time to use fewer playgrounds, we thought it might be beneficial to have more playgrounds and have age-appropriate equipment," VanderHeiden said.

The south parking lot may be renovated and serve as a parking lot for kindergarten and first grade, but that work has been named as an alternate option on bids.

Hutchinson City Council recently approved the site plan, but with the contingency that the number of parking lots with access to School Road be reduced from four.

"We are working to make some changes to make that happen," VanderHeiden said.

He said drawings aren't yet available, but some alternate plans had been discussed and are available.

The interior design saw minor changes with room layout and placement compared to a few months ago, but no major overhaul to the plan. One change mandated to the school upon review was the movement of a stairway from the northeast corner to a section beside the gym of the new addition.

Classrooms have been designed to have flexible seating arrangements. There will also be additional flexible group areas outside of classrooms.

"Teachers were involved with the layouts," VanderHeiden said.

The main entrance of the new addition leading into the cafeteria has been designed to have a similar open feeling as the high school's commons area, using natural lighting and wooden tresses along the ceiling.

A virtual tour of the building plans will be available soon. It will be posted at the district website at isd423.org along with construction updates as they begin. The design of renovations to Park Elementary will begin in about a month.