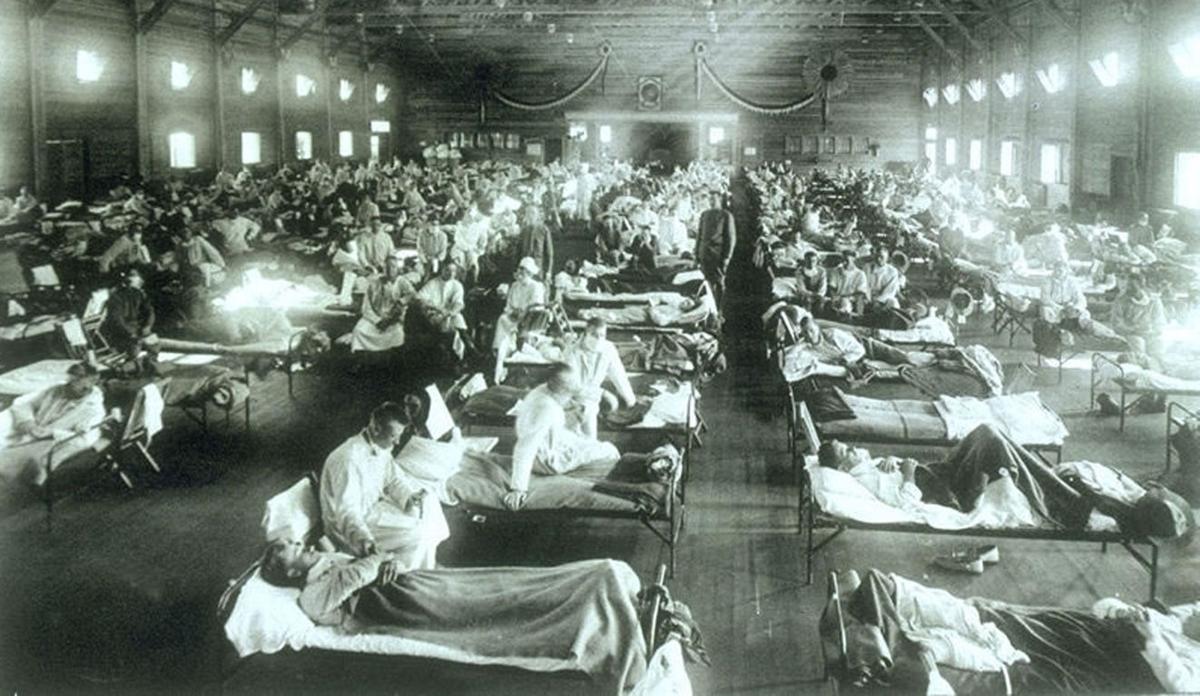 This historical photo of the 1918 Spanish influenza ward was taken at Camp Funston, Kansas. The scene was duplicated across the country and eventually worldwide. 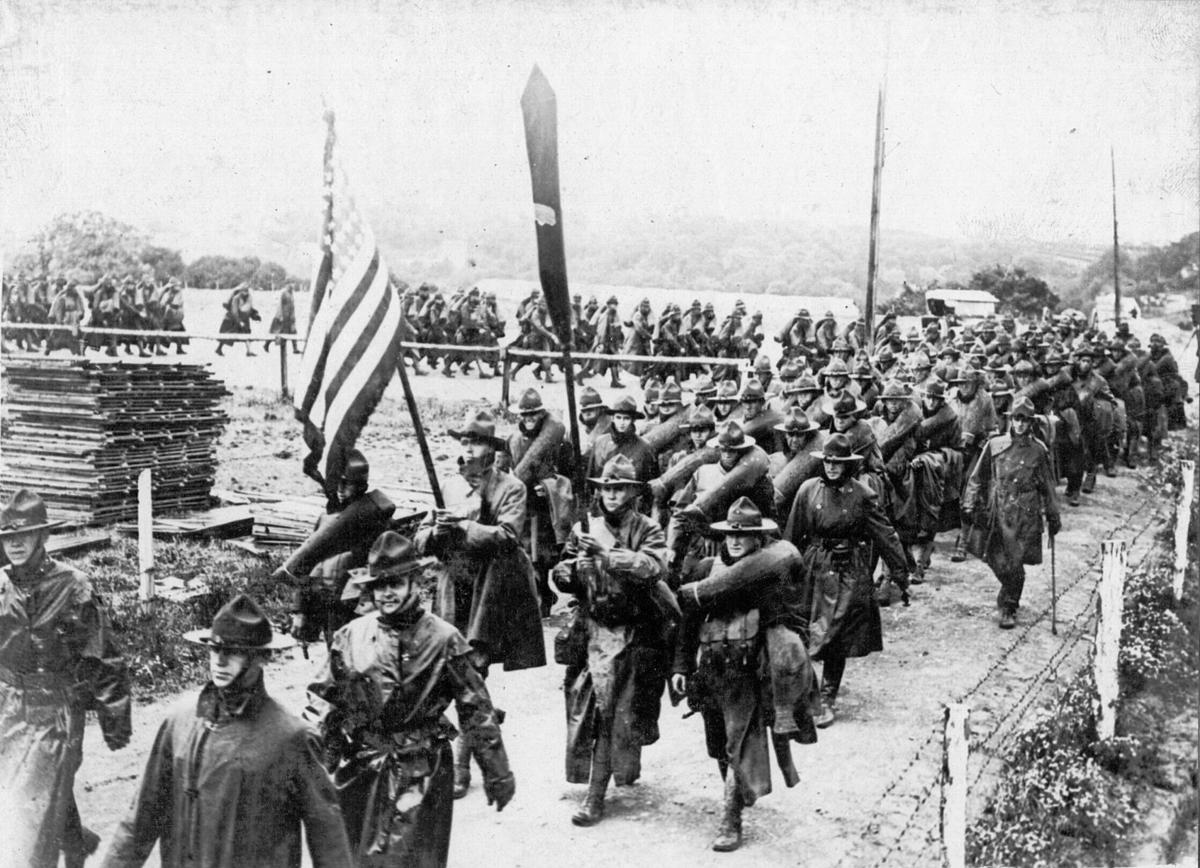 World War I American soldiers did not practice social distancing when they arrived July 12, 1918, in Le Havre, France.

This historical photo of the 1918 Spanish influenza ward was taken at Camp Funston, Kansas. The scene was duplicated across the country and eventually worldwide.

World War I American soldiers did not practice social distancing when they arrived July 12, 1918, in Le Havre, France.

The world is a curious place. Every day we make history by doing the same thing we did yesterday. We wake in the morning, we go to our jobs, try to make a little money, go home, spend time with loved ones, watch the same old headlines, and go to bed. The next morning, we wake and to it again. In the average lifespan, we repeat this process 31,390 times, and in that span, we see nations wage war, see people suffer, and hope for change. It’s as if the world were a movie where the setting and the characters adjust, but the plot always stays the same. In all, today is no different than yesterday, and tomorrow is no different than today.

Every now and again something happens that was unforeseen yesterday. Today, our headlines are filled with COVID-19, the coronavirus. Warranted or not, the virus has turned the world on its head. Schools and businesses are closing, and even professional sporting leagues have suspended play. There are travel bans, emergencies have been declared, store shelves are emptying, and a faction of the population is ready for an all-out panic. It’s something the likes of most of us have never witnessed, something that didn’t happen yesterday; however, as history shows, this outbreak both is and isn’t all that different from those in the past.

The world has been shaken by sickness many times in history. Since the beginning of time, humankind has had to grapple with disease — most notable the "Black Death" that swept Europe and Asia in the 14th century, killing more than 20 million people. More recent however were the H1N1 (swine flu), SARS, and “Bird Flu” epidemics. All the recent epidemics pale in comparison, however, to the deadly Spanish Flu of 1918 that killed an estimated 20-50 million people.

It was March of 1918, nearly a century ago today. America was gearing up for war in Europe, a war so ghastly it was dubbed “the war to end all wars.” It was thought no country would be willing to fight a war ever again with such deadly weaponry at hand. All around the nation, young men were being herded into crowded army camps to train for the trenches. One such camp was Camp Funston in Kansas. Hordes of young recruits were sent to the camp during the worst winter on record. Barracks swelled and troops were forced to sleep in tents under thick blankets.

Nearby, in Haskell County, Kansas, a small community was just getting over a mysterious sickness that seemed to only affect the farmers of the community. It was a flu bug that was shockingly contagious and extremely deadly. A local doctor was so terrified that he alerted the U.S. Public Health Service. They, however, chose to do nothing, feeling that in a small “backwater” community, the sickness would soon run out of people to infect and thus run its course.

Meanwhile, back at Camp Funston, a company cook named Pvt. Albert Gitchell reported to sick bay with flu-like symptoms. He was part of a batch of fresh recruits brought to the camp Feb. 28 from Haskell County. Coughing and sneezing, the Haskell, Kansas, boy was crowded into a jampacked barrack and spread the disease. By the end of March, more than 1,000 soldiers were sick with 28 dead.

The first wave of the flu in the United States came on rapidly but left just as fast. It was March, the end of flu season. In Europe, however, the flu would take hold and mutate. Fresh-faced American soldiers, with watery eyes and runny noses, walked off the troop ships in France and spread the sickness throughout the country.

In the trenches, the flu mutated, became more deadly, and more contagious. By May it had spread across Europe, killing 8 million people in Spain, where it earned the nickname “Spanish Flu.”

By June it spread through India and China. By July it was sprawling across Africa and South America, and by August it found its way back to the docks on America’s East Coast. This time around, it was far deadlier than the version that had left so many months earlier.

The infected experienced symptoms including severe nausea, aches, fever, and diarrhea. Many developed black blotches on their skin and would even turn blue due to a lack of oxygen. Once a patient turned blue, it was only a matter of hours, or minutes even before they would die. Some became infected only to die as little as 12 hours later, showing no symptoms until the very end.

Troops coming home on ships from Europe were sick, many dying. Reports were of bodies being stacked like cordwood on the docks. Masks were handed out, hand sanitation was urged, and large gatherings were banned. Hospitals could scarcely keep up with the flu and swelled beyond capacity.

Perhaps one of the worst epicenters was in Philadelphia. The city decided to throw a parade to show support for the war. Public health officials begged and pleaded with the city, but their warnings were ignored. An estimated crowd of 200,000 people crammed together on city streets to watch the parade. Three days later, every sick bed in the city’s 31 hospitals was full of sick and dying patients. By the end of the week, 4,500 citizens of Philadelphia were dead. City officials closed the city, all businesses and public services ceased to operate, yet it was too late. An estimated 12,000 people died in Philadelphia alone.

After the deadly second wave of Spanish Flu, the sickness abruptly stopped. It peaked late in 1918 and diminished to almost nothing. One theory of its demise was that doctors were becoming better at treating it. Another was that the sickness had further mutated, but became less deadly with far milder symptoms. The damage had been done, however, as 500 million people  worldwide had been infected with the flu, and up to 50 million perished because of it.

Today, as it was in 1918, people are afraid of what tomorrow may bring. Health officials have yet to get a firm handle on COVID-19, there’s no vaccine, and symptoms can be so mild that a person does not know he or she has it while passing it along to others. How the coronavirus will unfold is anybody’s guess. We can hope that it goes to the wayside like so many others or that a vaccine is developed to eradicate it. History proves, however, that the only thing that is certain is the uncertainty. We may be certain about today, but we are uncertain about tomorrow in a way that was no different than yesterday.

Brian Haines is executive director of the McLeod County Historical Society and Museum, 380 School Road N.W., Hutchinson. During this time of uncertainty, the museum is closed and programming is canceled. For more information, email Haines at director@mcleodhistory.org.