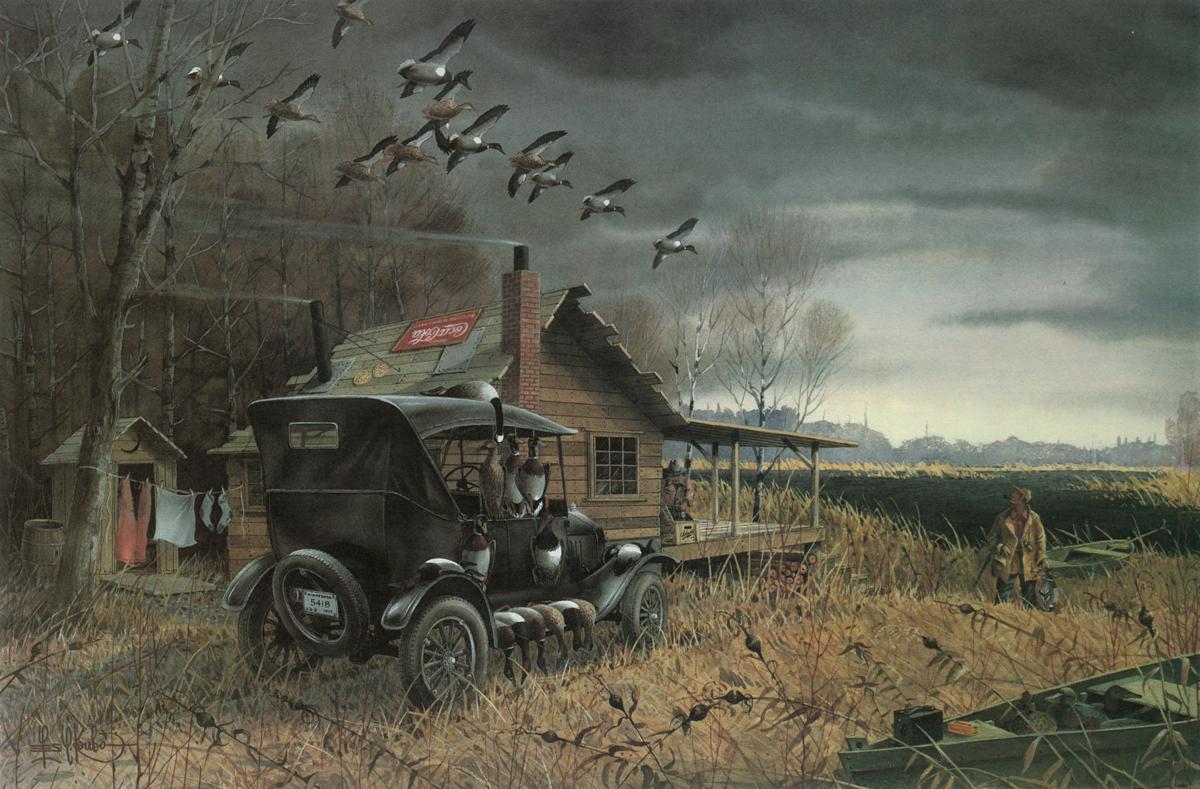 Les Kouba painting “The End of a Classic Era” tells a different story to each person who sees it. 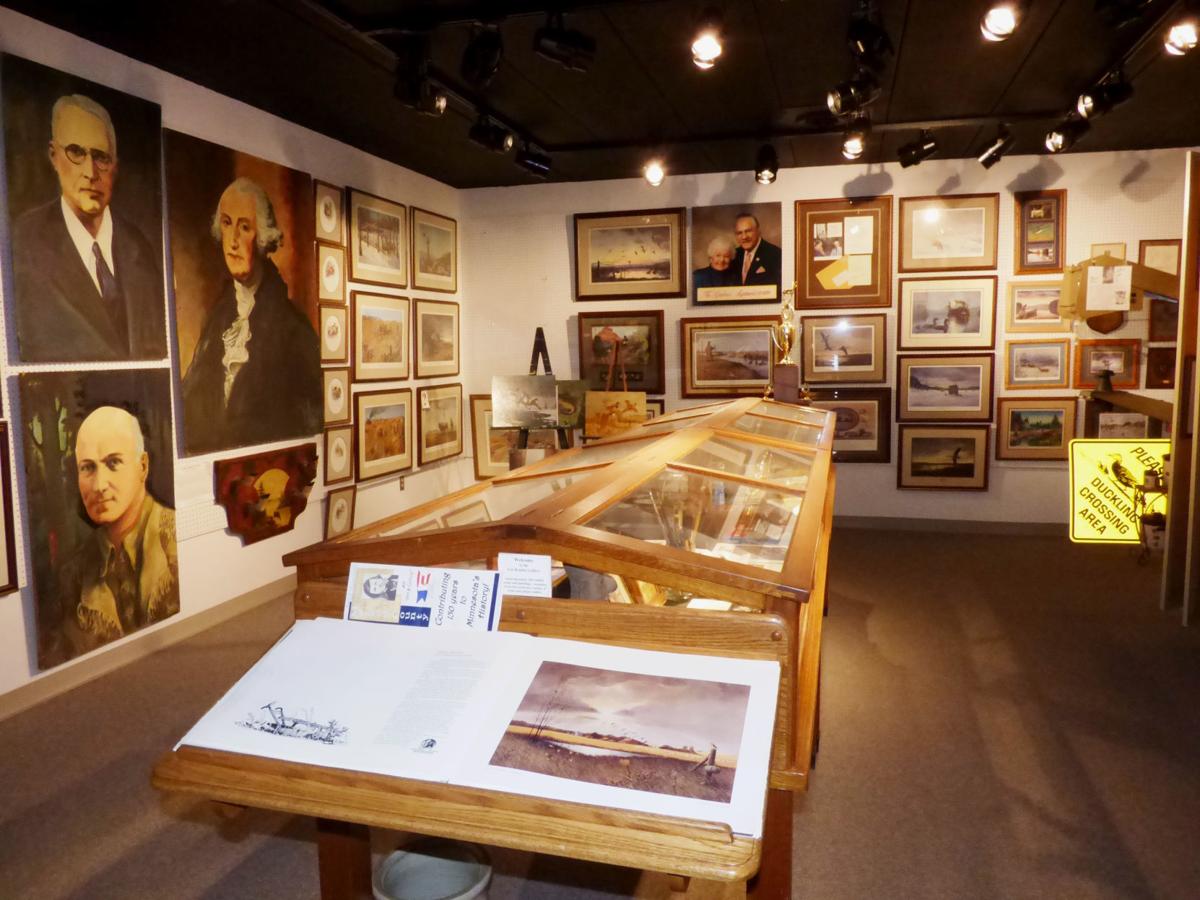 A “must-see” exhibit at the McLeod County Historical Museum is the Les Kouba Gallery. The Hutchinson native was a well-known Minnesota wildlife artist who won two federal duck stamp design contests: 1958-59 with Canada geese and 1967-68 with Old Squaw ducks. He also designed many state conservation stamps.

Les Kouba painting “The End of a Classic Era” tells a different story to each person who sees it.

A “must-see” exhibit at the McLeod County Historical Museum is the Les Kouba Gallery. The Hutchinson native was a well-known Minnesota wildlife artist who won two federal duck stamp design contests: 1958-59 with Canada geese and 1967-68 with Old Squaw ducks. He also designed many state conservation stamps.

They say a picture is worth a thousand words. With that in mind, I’ve always felt that there’s more to the phrase in that those thousand words are different to each person.

Some see a picture or painting for what it is — a capture of an event or of people. Others see a story, events unfolding and captured for eternity in a single frame or on a canvas. I guess, in some ways, an artist or photographer can be as much of a storyteller as a writer or an outdoorsman. When you’re both, a thousand words are never enough.

There’s a painting at the museum, one that I’m rather fond of. If you haven’t guessed, it’s a Les Kouba — a painting called “The End of a Classic Era.” Being an avid outdoorsman and storyteller, I find myself lost in the art every time I look at it.

It was the mid-1920s, and fall was getting on. September passed, pleasant with cool autumn mornings and warm summer afternoons. It was weather that snuck into October, an agreeable climate for long walks and watching the leaves change color. As satisfactory as it was, it was doomed to change. On the last week of the month, a cold snap swept through the region. The leaves fell and the trees went bare. The blue sky turned coppery and the mornings turned frosty. For the normal folks in the world, the weather was unfavorable. For two men, however, it was just what they’d been waiting for.

They were duck hunters, and the cold beckoned them “up north” where a cabin awaited on the banks of a shallow lake. They left work on a Friday afternoon and headed up for the weekend. The trip was made in a 1925 Model T Ford, a long drive, but one passed by with stories of yesteryears’ hunts and hopes for one to put in the books.

Anticipation was high as they turned off the highway onto an old logging road. At times the two men feared the narrow tires of the Model T would get stuck in the deep ruts, yet it was worth the risk. At the end of the road was the shallow lake, surrounded by woods and, at times, home to hundreds of ducks feeding on the wild rice that grew around it.

The lake and the cabin came in sight. It was a rustic cabin, one that looked as natural to the landscape as the trees and lake next to it. The cabin was built over the summer, hastily constructed before the start of hunting season. Though it was new, it looked aged and inside smelled of woodsmoke. The boards were already weathered, and shingles were yet to put on — a job for next summer. Gaps in the roof were covered with an old Coca-Cola sign and two pieces of lefse. Like the old Scandinavian song goes, “You can even patch a roof with lefse.”

Saturday morning began before sun up, while the moon and stars still shone brightly in the dark sky. In handmade wooden boats, the hunters set out with cork decoys and hopes of a good hunt. Sunrise was gorgeous, but the red sky that came with it meant a storm was coming in later that day: “Red in the morning is a sailor’s warning,” one said to the other. How right he was.

The hunt was successful, yet one of the men had a mishap when he fell from the boat into the cold water. Luckily, he made it back into the boat.

With a limit of birds in hand, they arrived back at the cabin. The weather was certainly changing. Low, gray clouds were streaking into the sky, and with them came the feeling of a cold, wet rain. The wet hunter changed clothes, put wood in the cook stove and set to hang up his wet clothes on a rope tied to the cabin and a half dead poplar tree. The dry hunter brought the boats up on shore and hung the ducks on the side of the Model T, a popular way to take a photo of the ducks during the time — a way to photograph two prizes at once.

The wet hunter reached into the stock of Schmidt beer out on the porch. As Kouba said, he was “getting dry on the outside and wet on the inside.” Meanwhile, his partner brought in the last of the ducks from the boat. With a smoking pipe in his mouth, he looked above the cabin’s roof and saw 13 late-season mallards heading out onto the lake. Though it was 13, he took it as a lucky omen, meaning the early cold snap is bringing the ducks down, and tomorrow morning’s hunt would be one to remember.

The museum is home to many Les Kouba paintings. Like this one, each tells a story of its own and is definitely worth a trip to see what kind of story it tells you.

— Brian Haines is executive director of the McLeod County Historical Society and Museum, 380 School Road N.W., Hutchinson. Do you have a historical anecdote to share? Haines can be reached at 320-587-2109 or by email at director@mcleodhistory.org.