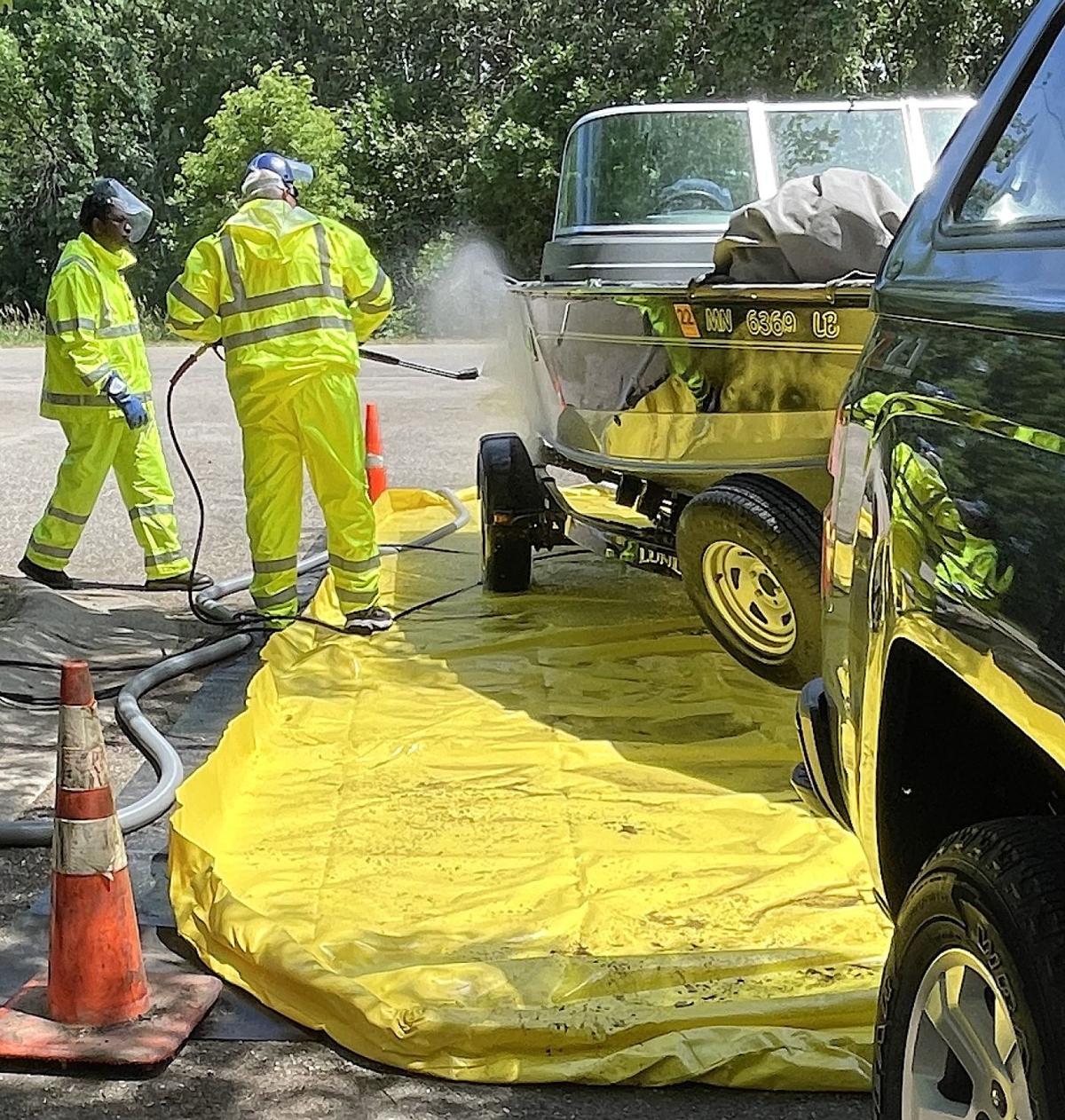 Aquatic invasive species inspectors trained on how to use the decontamination unit at Lake Minnie Belle when the unit arrived in June. 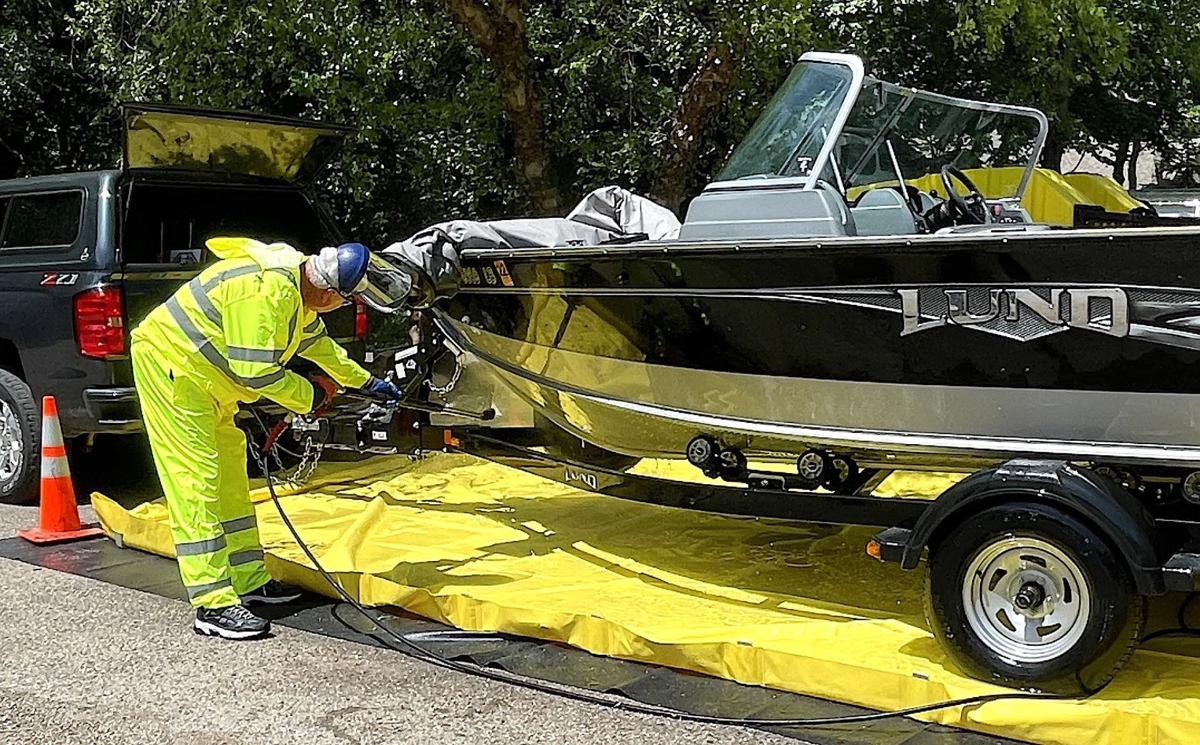 Boaters pull their trailered watercraft onto a collection pad where it is hit with pressurized, heated water to remove any aquatic invasive species, or AIS.

Aquatic invasive species inspectors trained on how to use the decontamination unit at Lake Minnie Belle when the unit arrived in June.

Boaters pull their trailered watercraft onto a collection pad where it is hit with pressurized, heated water to remove any aquatic invasive species, or AIS.

During the summer of 2020, people from 21 different states put a boat into one of Meeker County’s 104 lakes.

It’s an impressive number, one that speaks volumes about the area’s popularity as a recreational destination. But for those concerned about protecting the lakes from foreign invaders — zebra mussels, Eurasian watermilfoil, starry stonewort and the like — that heavy and wide-ranging aquatic traffic is a bit worrisome.

That’s part of the reason the county added another weapon to its arsenal this summer, as it continues efforts to stem the tide of infested lakes, which currently numbers nine. In June, the public access on the east side of Lake Minnie Belle became home to a new watercraft decontamination unit, which can clean and remove aquatic invasive species from boats.

“Everybody kind of thinks it’s everywhere, and everyone thinks, well, why are we doing this, because it’s just going to be everywhere.” Mike Solbrack, chairman of the Meeker County Aquatic Invasive Species Advisory Committee, said. “But the stuff’s been around a long time, and less than 10% of our lakes have AIS. So, you know, this prevention stuff, I think it’s important.”

That “prevention stuff” has included boat inspectors at 12 to 15 county lakes throughout the summer the past few years.

Minnie Belle’s zebra mussel infestation was confirmed by the Department of Natural Resources in October last year, as the species was found at two different sites in the lake, indicating an established population, according to the DNR.

The arrival of AIS in a lake can be devastating. Zebra mussels compete with native lake species for food and habitat, and they also can cut the feet of swimmers, reduce boat motor performance and damage water intake pipes. Eurasian watermilfoil is an aquatic vegetation that creates dense mats at the water’s surface, stifles native aquatic plants and harms food, shelter and nesting habitat for native animals.

Both AIS present a serious threat to Meeker County’s status as a destination for recreational boaters and anglers. Thus, the investment in boat inspectors, and now, a decontamination unit.

“By staffing a decontamination unit it mitigates some of that traffic we have going from our infested waters to our uninfested waters, and that allows us to minimize the amount of unchecked traffic that we have going towards our lakes that don’t have zebra mussels or don’t have Eurasian milfoil or starry stonewort,” said Ariana Richardson, Meeker County AIS coordinator.

Richardson was hired in 2019 as Meeker County’s first paid AIS coordinator. In that position, she works with the AIS Advisory Committee, as well as the contractors who hire and manage the watercraft inspectors at county lakes. Meeker County’s proactive approach and active advisory committee members have made a big difference in efforts to minimize AIS spread in county lakes, Richardson said.

“Not all counties have advisory committees or coordinators, and some don’t have, you know, both, if they do have one,” Richardson said. “So one of the big things to kind of brag about, I think, is how active our committee has been. We’ve had folks that have been on (the advisory committee) since the very beginning (in 2014).”

Meeker County and its AIS Advisory Committee receive funding from the state each year and use it to fund 15 to 20 projects on county lakes, including projects like training residents and lake association members to do watercraft inspections and identify AIS, supporting boat inspections and using harvesters and chemical treatments to manage invasive species in county lakes.

The state has provided $10 million to counties since the statewide AIS program’s inception in 2014. Meeker County received $228,460 in state AIS aid this year, which was set aside to assist in treatment, additional inspection hours and outreach efforts. Additionally, the county allocated $124,000 in community grants for lake improvements.

The decontamination unit, which cost about $18,000, was paid for out of a newly established infestation response fund, which supports early detection and response to recent infestations in the county, and was a purchase that was “carefully considered,” Richardson said.

The county contracts with a company that hires the inspectors, trains them and oversees their employment. Inspection hours were trimmed somewhat this year to allow for more hours of staffing at the decontamination unit.

The decontamination unit is a self-contained, high-pressure, high-heat wash unit that can decontaminate watercraft at the public water access without allowing any of the wash water to run off. Boat owners drive their trailered watercraft onto the collection pad to use the system.

The unit is staffed 7 a.m.-5 p.m. seven days a week, with the Lake Minnie Belle Association funding weekday coverage. Since it opened, the unit has been used for 11 decontaminations in June and July.

“The goal is .. when you bring your boat in, and it has any kind of standing water or water left in the bilge or bays or live well, they will use whatever tools are necessary” to decontaminate it, Richardson said. “They use the decontamination unit to create contact with the watercraft surfaces of concern — heated water up to 140 degrees — because 10 seconds of contact with that heated water kills off any kind of (AIS) or zebra mussels.”

Watercraft inspections and suggestions for decontamination have been contentious in some areas, according to Richardson. Some boaters have felt the inspections an unnecessary burden, or an effort to catch other violations. That led to an increase around the state in confrontations between boaters and inspectors, especially during the summer of 2020, she said.

But early efforts in boat inspections and its proactive approach seem to have limited those problems at Meeker County lakes.

“We’ve really been able to tear down, perhaps, misunderstanding at the launch, or animosity at the launch locally,” Richardson said. “You know, I didn’t really get complaints of people being angry or having anything bad happen last summer.”

In the end, Richardson said, inspections and the new decontamination unit are part of what she hopes can be a team approach to keeping Meeker County’s recreational waterways clean and safe for everyone to use.

“Our main message we want to get across to folks is that when we offer or require the decontaminations, boaters do their part to protect the lakes by allowing us the extra few minutes to help maintain their equipment and protect our lakes,” Richardson said.