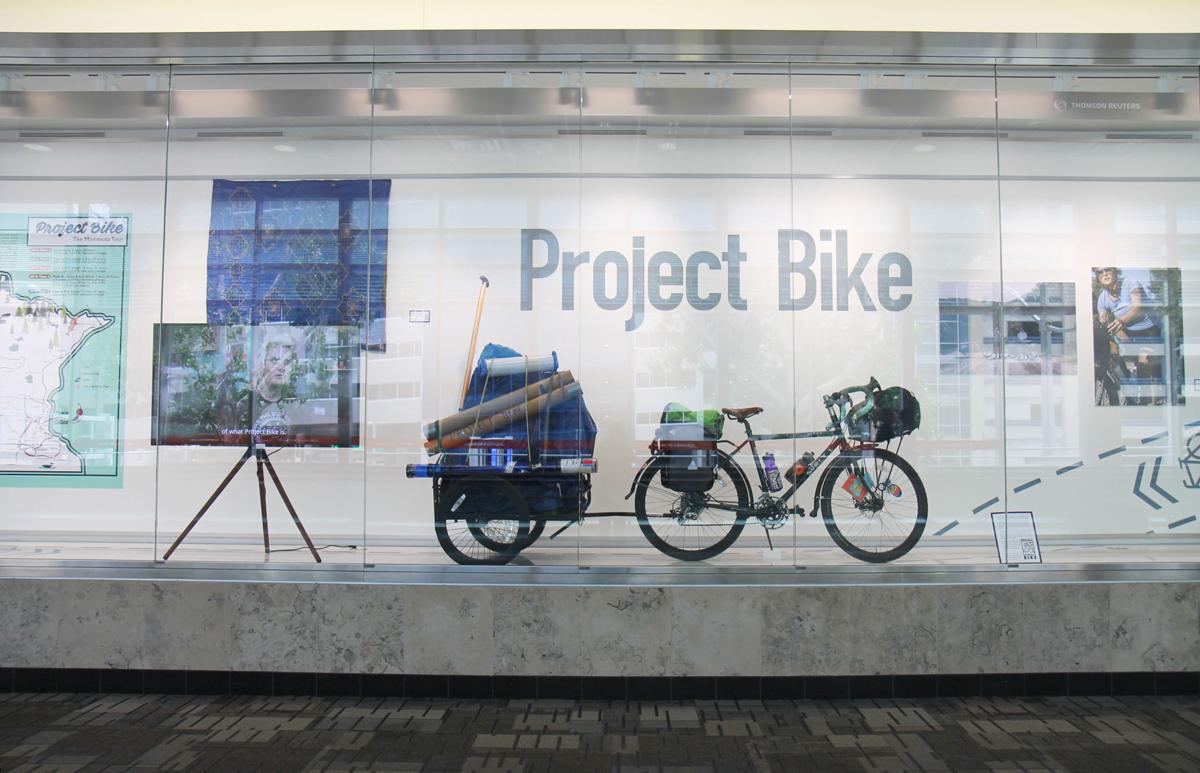 Dana Sikkila’s touring bicycle, which she rode about 2,500 miles to meet 65 artists over five summers, plays a featured role in the Project Bike exhibit. 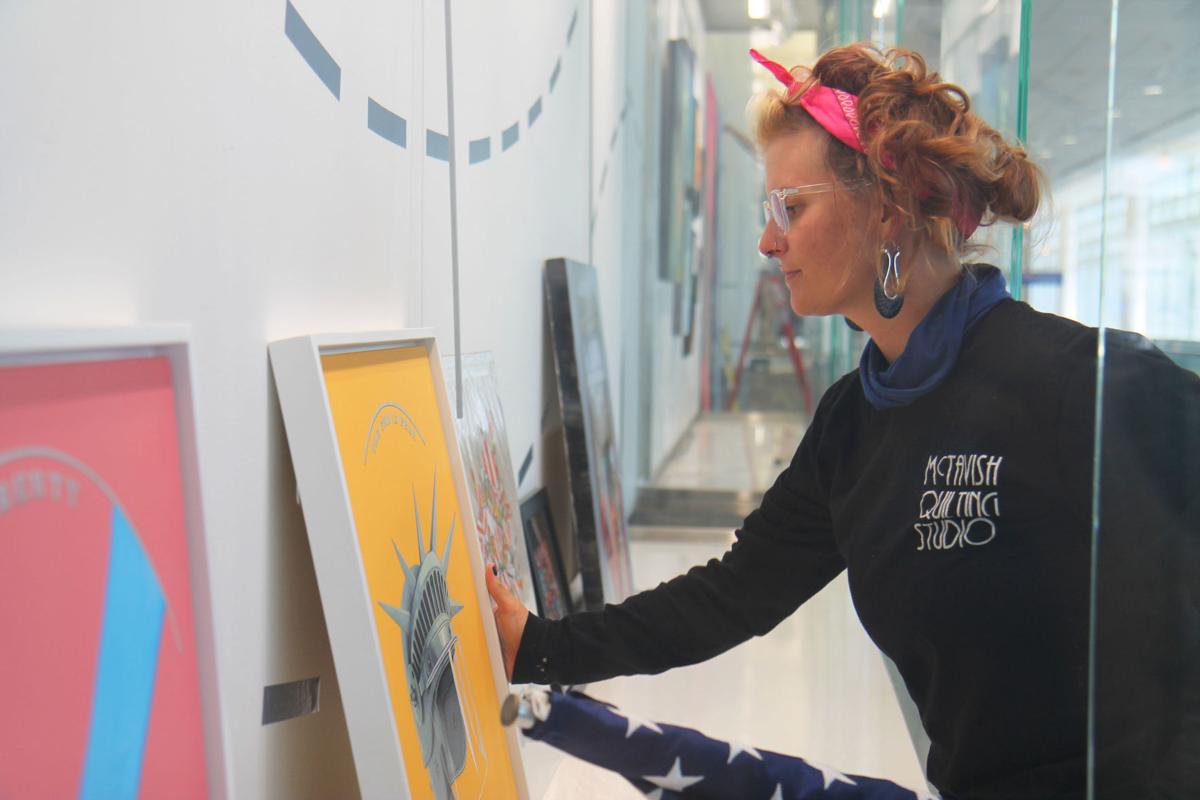 Dana Sikkila arranges some of pieces of art that are part of the Project Bike Retrospective at Minneapolis-St. Paul International Airport. 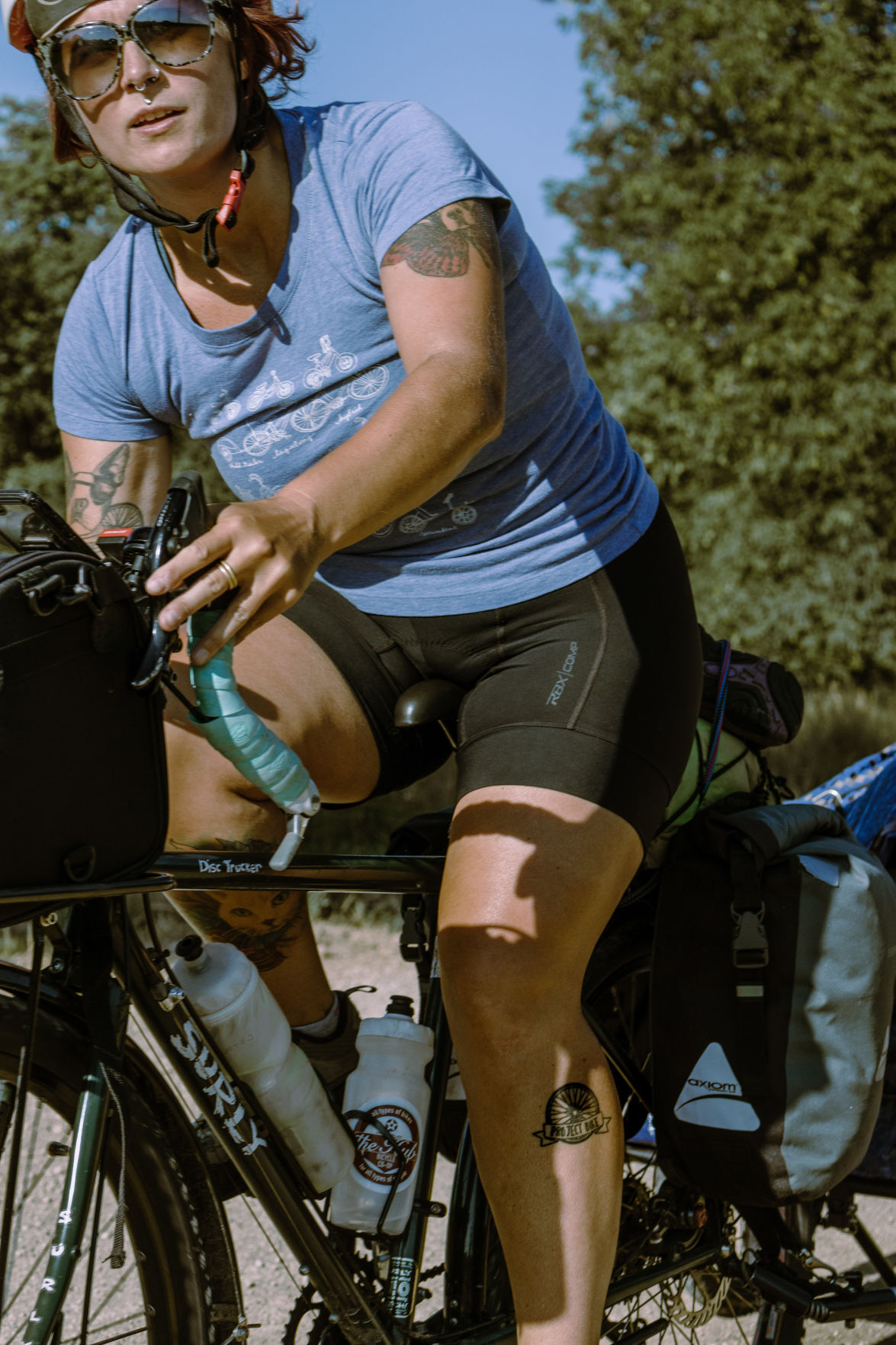 Dana Sikkila cycled about 2,500 miles and met with 65 artists from around the state as part of Project Bike. 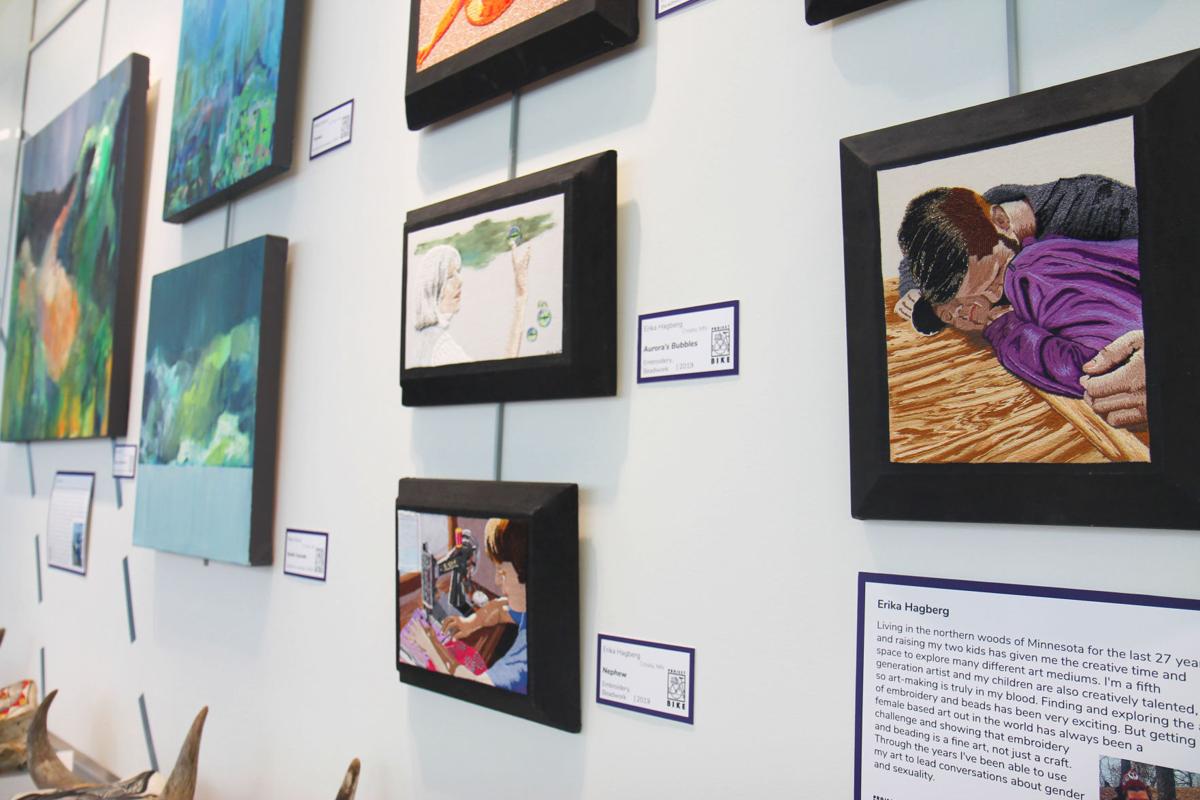 Several paintings are part of the Project Bike display. 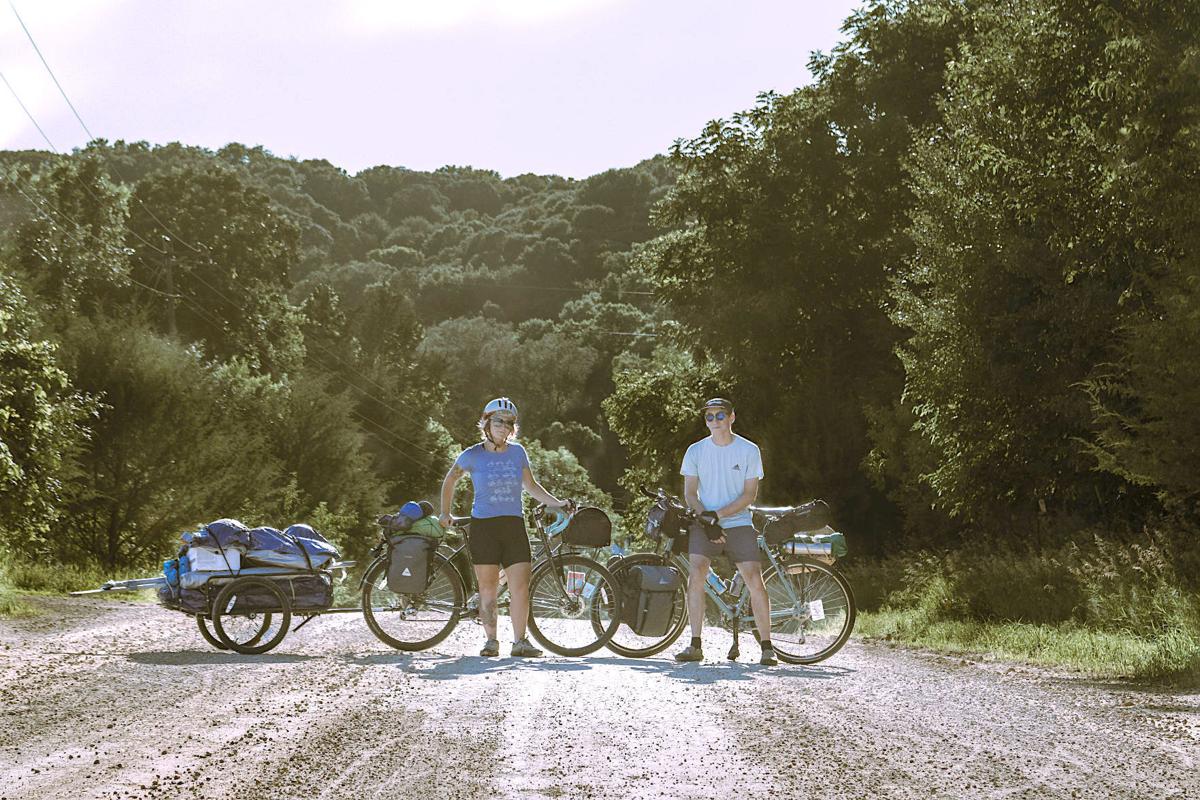 Dana Sikkila and her cycling companion and logistic manager Kyle Zeisler pose for a photo before continuing a Project Bike tour.

A bicycle might not seem like a work of art to some people. But Dana Sikkila’s bike is, in a sense, both artwork and an implement to create art. That’s why the Surly Disk Trucker touring bicycle plays a central role in a new art exhibit at Minneapolis-St. Paul International Airport.

That functional piece of art carried Sikkila some 2,500 miles to meet more than 60 artists over five summers from 2015 through 2019, and it holds the title role in the Project Bike Retrospective, which runs through Dec. 6 in the Thomson Reuters Concourse C Art Gallery in Terminal 1 at the airport.

“It’s really exciting,” Sikkila said of the exhibit. “It’s their largest display area in the airport … a really cool venue.

“I hope that people viewing Project Bike … get inspired,” she continued. “A lot of people have ideas of things they want to do or should have done. Sometimes we don’t push ourselves hard enough. I’d like it if (the exhibit) gives them motivation to get more creative, or do something they’ve always wanted to do.”

That might also stand as the foundation for Project Bike, a creative idea that Sikkila had in 2014 that took plenty of hard work and motivation on her part to come to fruition.

BIRTH OF AN IDEA

Sikkila, who describes herself as a "mixed-media artist," had been director at The 410 Project in downtown Mankato — a volunteer-run gallery — for about two years when she struck upon an idea that would serve multiple purposes. An avid cyclist, Sikkila dreamed up the idea of a bicycle tour that would take her to visit artists throughout southern Minnesota, where she hoped to collect at least one piece of art from each, and then bring it all back to The 410 Project gallery to exhibit.

Combining her passion for the arts and cycling just made sense, she said, and it could do wonders to promote the arts scene in rural southern Minnesota.

“What could we do beyond having art shows or classes (at The 410 Project) to get people in northern Minnesota to know what’s going on at The 410 or Mankato?” Sikkila said. “Why don’t I just take the two things I’m good at, put them into one thing and connect people throughout the state.”

Coming up with the idea turned out to be the easy part. The logistics of a cross-country bicycle trip — the first tour would take her from Mankato, through Rochester to the Minnesota-Wisconsin border and back — during which she would meet with artists and convince them to donate artwork to her was a bit daunting.

“I had never toured before, that long a distance,” Sikkila said. “I didn’t know how far to push my body or my brain. It was a huge learning experience, and my parents were terrified.”

And the cycling was only part of it. The art mission was another complication. A relative unknown outside of Mankato’s art scene, Sikkila planned to meet nine artists on that first tour.

“I had to beg people to take part,” she said. “I had never done it, and then here I am asking, ‘Please let me borrow some artwork.’ People were like, ‘Who are you?’”

She filmed the two-week tour, using GoPro cameras strapped to her body and bike to capture the mission. By the time she had completed her loop throughout southeastern Minnesota, she was exhausted and had collected 12 pieces of artwork.

“It was a crazy thing,” she said. “I showed myself what I can do … as well as learning how to connect with other people in an authentic way, bringing that human connection."

“But I remember getting home after that first summer and saying, ‘I’m never doing that again,’” Sikkila added.

As planned, Sikkila organized an exhibit at The 410 Project to display the 12 pieces of artwork she had collected, and opening night would include a brief video with footage of the tour to explain the exhibit. It would be a nice way to close the book on the project, the signature at the bottom of a painting, so to speak. Except it turned out to be just the start of her tours.

“A bunch of people showed up for the opening, the place was packed,” Sikkila said “People were really resonating with this idea of Project Bike.”

She took the overwhelming support as a sign that the first tour was just the beginning of her unique artistic journey, and she began planning the next Project Bike tour.

Sikkila enlisted the help of a friend, Kyle Zeisler, who would become part athletic trainer, part logistics manager and full-time tour cycling partner. She also connected with a filmmaker who would follow and document the next tour, and then she was off.

The next three summers were filled with tours around southern and central Minnesota, meeting artists and craftsmen of all sorts, from painters to sculptors and beyond. The 2017 Project Bike tour took her through Litchfield, where she met up with sculptor Gerry Kulzer, who also happened to be her high school art teacher.

With greater exposure of the Project Bike effort, Sikkila found it easier to meet with artists, who also were more willing to send their work off with her on the tour. This created another challenge, she said, as all of the artwork collected was packed in a bike trailer, which she pulled the entire distance of each tour.

“The first year, it was like paper work,” Sikkila said. “By the end of the fifth year, when the trailer was holding all the artwork — metal sculptures, glasswork, huge paintings — it was pretty intense, but an amazing sight to see. But that trailer carried like 200 pounds. I’m the one who carried that.”

And that was important, Sikkila said, because carrying the artwork of so many creative people was part of the whole experience.

“I’m the one, kind of the support of the work, taking care of it,” she said. “And those artists are trusting me with the work they’ve spent hours, maybe months, creating. So it was me taking on that responsibility of carrying it all.”

END OF THE ROAD

At the conclusion of each tour, Sikkila and Zeisler would sit down to discuss how things were going, and whether Project Bike should continue the next year. After the fourth year, Zeisler told her he “kind of wanted his summers back.” Sikkila decided that it might be time for her to find other adventures, as well. So they planned a final tour for the summer of 2019, a journey from Grand Marais on Minnesota’s North Shore all the way back to Mankato.

“It was gorgeous, and I met a lot of amazing people,” Sikkila said, calling it a fitting way to close out Project Bike, not unlike the last chapter of a book.

"The first chapter was kind of grassroots, jumping into the deep end of the pool, and it just grew and grew and grew, then this is the final chapter.”

Except there was still a bit more to come, including the airport retrospective and a 90-minute documentary film that's scheduled for release in October.

The airport exhibit came about through Sikkila's connection to Benjamin Owen, director of Arts@MSP, the foundation that oversees arts and culture exhibits at the Minneapolis-St. Paul International Airport.

“Once I was working at the airport and had the opportunity to curate exhibitions … that (Project Bike) was one of the first projects I thought would be a great way to highlight what’s going on in outstate Minnesota,” Owen said. “I really wanted to share that this awesome Project Bike project was happening. What was really exciting about it to me was that she was touching base with so many creatives in these smaller towns and putting together these amazing exhibits.”

It took about two years and “a lot of correspondence and logistics,” but Project Bike was finally booked. The exhibit runs about 300 linear feet and includes the work of 12 of the 65 artists Sikkila met during five years of tours, along with Sikkila’s Surly Disk Trucker, the bike trailer, maps and other tour accoutrements.

“We kind of left it up to her to select the artists that she would like to highlight,” Owen said. “I’m thrilled with it. It looks really wonderful. It’s filled with local artists’ work. That’s what we like to do, highlight the creative economy and share it with people traveling through the airport. We recognize our space is a powerful platform."

Portrait of an artist

What: The Project Bike Retrospective, an exhibit featuring the story of Sikkila's five-year odyssey of meeting rural Minnesota artists, is on display through Dec. 6 at the Thomson Reuters Concourse C Art Gallery in Terminal 1 at Minneapolis-St. Paul International Airport.

Who she is: Sikkila, 34, grew up in Litchfield, the daughter of Larry and Colette Sikkila. She graduated from Litchfield High School in 2004 and attended Minnesota State University Mankato. She is now a part-time professor at MSUM, as well as volunteer director at The 410 Project art gallery in Mankato.

In addition to teaching and her work at The 410 Project — and setting up Project Bike at the airport — Sikkila has been busy this summer painting large murals at a Mankato playground, and some of her mixed-media work will be featured in a show that opens later this month in northeast Minneapolis.

More to come: Sikkila's Project Bike journey will be the subject of a documentary film that's planned for release in October. You can find a "mini documentary" of her 2019 tour online at youtube.com/watch?v=zGPjVrB20pk. Video of her tours from previous years is also online at the410project.com/links.html.