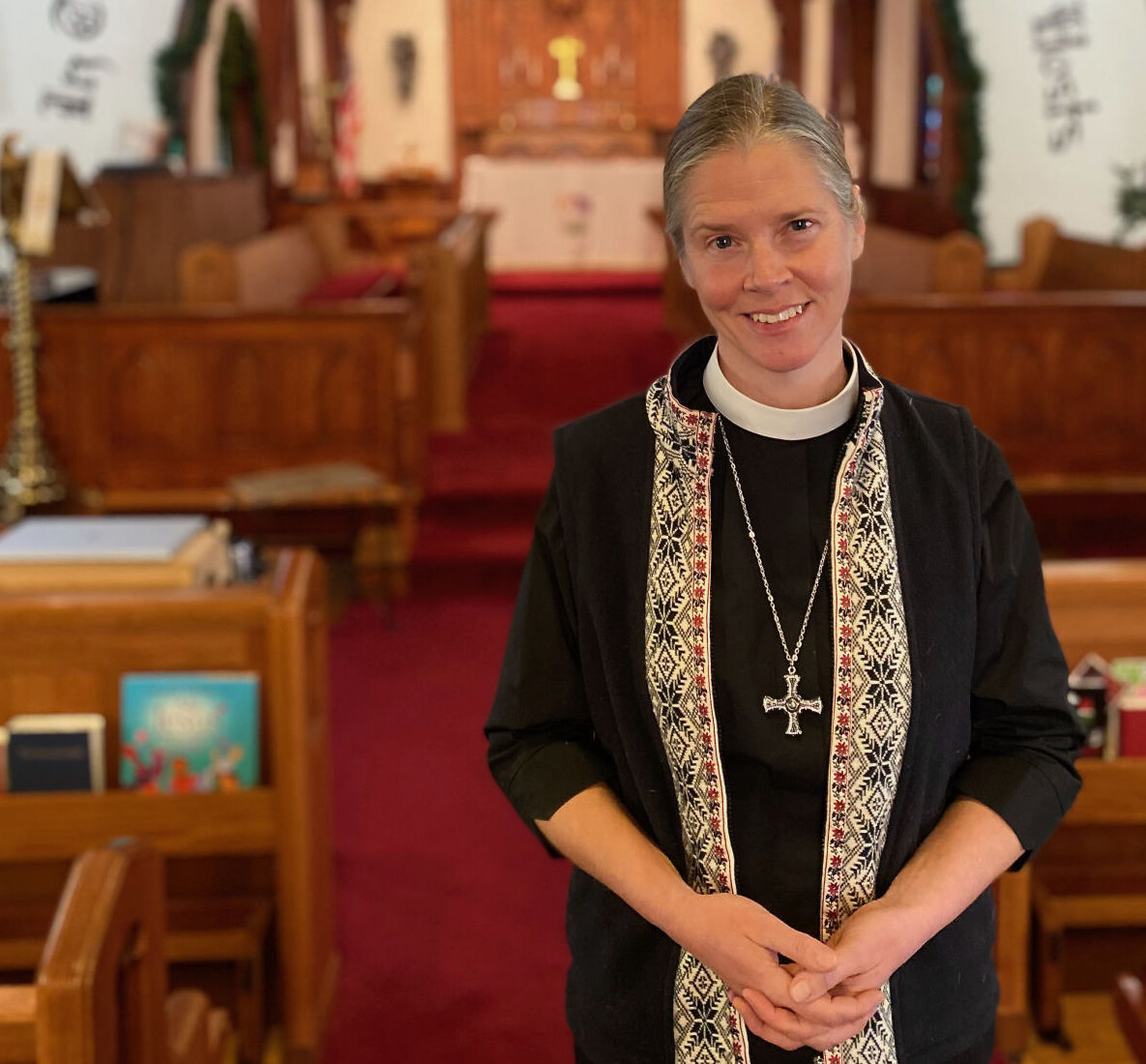 The Rev. Kerri Meyer accepted a call late last year to serve as part-time priest-in-charge at Trinity Episcopal Church in Litchfield. She moved back to Minnesota about two years ago after six years in California, where she served as associate rector of St. Gregory of Nyssa Episcopal Church in San Francisco. 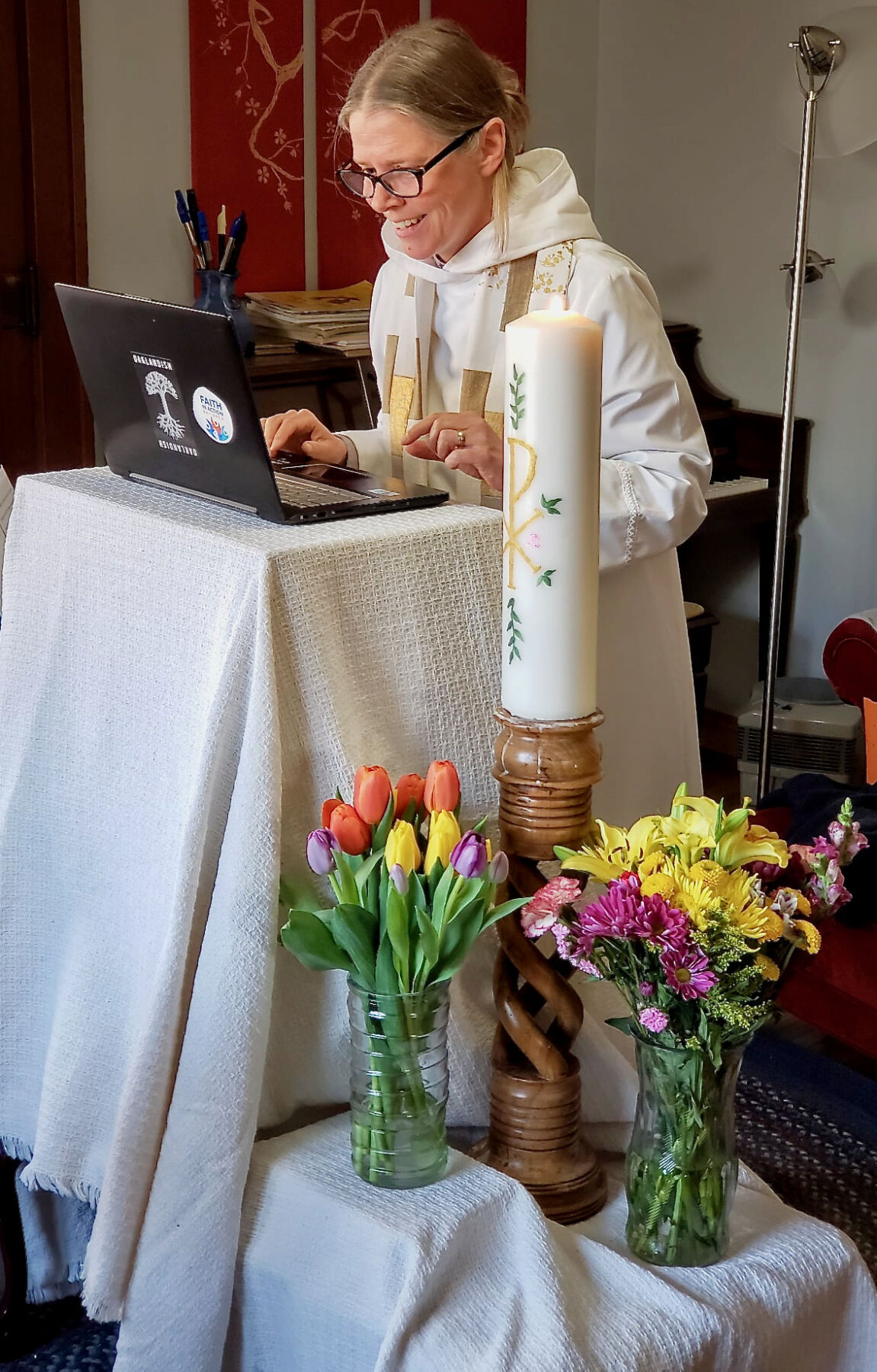 Like many churches, Trinity Episcopal Church in Litchfield pivoted to online worship when the COVID-19 pandemic began. The Rev. Kerri Meyer, shown leading worship via her laptop, spent a couple of months during the summer of 2020 helping the church’s older members get set up so they could participate in the virtual worship services.

The Rev. Kerri Meyer accepted a call late last year to serve as part-time priest-in-charge at Trinity Episcopal Church in Litchfield. She moved back to Minnesota about two years ago after six years in California, where she served as associate rector of St. Gregory of Nyssa Episcopal Church in San Francisco.

Like many churches, Trinity Episcopal Church in Litchfield pivoted to online worship when the COVID-19 pandemic began. The Rev. Kerri Meyer, shown leading worship via her laptop, spent a couple of months during the summer of 2020 helping the church’s older members get set up so they could participate in the virtual worship services.

And both Trinity Episcopal Church members and the Rev. Kerri Meyer are optimistic about the match.

“I feel pretty lucky,” said Meyer, who was called in late December to serve as part-time priest-in-charge at Trinity Episcopal. “I am so moved by the history, commitment to the parish, commitment to the community. … We said yes to this invitation to the spirit.”

Trinity Episcopal Church, founded as a mission church in 1871, marked its 150th anniversary this past May. Church membership has risen and fallen during the past century and a half, from a high of about 150 to a current congregation that numbers about 20 on any given Sunday.

As parishioners celebrated the church’s anniversary, they looked to a future of reinvigorating the congregation. Mary-Anne Olmsted-Kohls, the church’s senior warden, said leadership was working with the diocese “to develop our future course.”

Served by so-called “supply priests” for several years, the church looked to add a pastor who could provide a more local presence. Meyer turned out to be that person.

“Trinity’s new priest looks forward to being a regular and neighborly presence in Litchfield, and to counting herself among the friendly and hospitable group of faithful Christians who call Trinity their church home,” Olmsted-Kohls said in a written release announcing Meyer’s call. “Her preaching brings a uniquely Episcopalian voice to the community, focusing on Jesus’ steadfast example of justice-seeking love that embraces strangers and those whom society casts aside.”

Meyer was born and raised in Michigan, but she lived in St. Paul for several years while helping to start a church. She then spent six years in California, where she was ordained a priest, before moving back to Minnesota.

The return was something Meyer and her spouse, Jennifer Blecha, an associate professor of human geography at San Francisco State University, looked forward to, and was one of opportunity when they discovered a 93-acre farmstead in rural Hutchinson for sale on which they could establish an agrarian ministry.

Their idea became reality in 2019 when they purchased the property and began Good Courage Farm. The farm includes a vineyard and about 18 acres planted with a variety of perennial fruits such as apple and pear trees, raspberries, table grapes, plums, currants, gooseberries and elderberries, as well as non-fruits such as asparagus and mushrooms.

Though they can’t take credit for establishing the farm — that they happily credit to the former owners — their farm-based ministry is certainly rare for this area, if not unique.

“We hardly invented this idea,” Meyer said. “Lots of groups in lots of denominations are embracing the idea of agrarian ministry (where) folks of faith can reconnect to their Christian commitment to creation and goodness and abundance.”

The farm has multiple purposes, Meyer said, including to grow good food to feed people who might not otherwise be able to access good, organic food, and to provide ministry and an outdoor space for worship.

Having a vineyard in which they can bring visitors out to read the parable of the vineyard and “immerse ourselves in the context of what Jesus’ listeners would have known” provides a unique perspective and environment for learning and growing in faith, she said.

Continuing to grow in faith is something Meyer and Blecha wanted for themselves after they moved back to Minnesota, which led them to Trinity Episcopal Church in Litchfield. As regular parishioners, they got to know the four supply priests — some who have been traveling to Litchfield from the Twin Cities area for 15 years to serve the local congregation — and other members of the church.

When the church lost one of the long-time supply priests just prior to the beginning of the COVID-19 pandemic in 2020, Meyer stepped into the Sunday rotation. The pandemic forced several months of “radio silence,” Meyer said, when the congregation could not gather in person in the church at the corner of Sibley Avenue North and Fourth Street.

“I finally called the senior warden and asked about ‘Zoom church,’” Meyer said, and the church leadership agreed that it would be good to establish a plan for virtual worship. With most parishioners in their 70s and 80s, Meyer says, she spent a couple of months in the summer of 2020 helping them get set up to participate in online worship.

“We helped the parish do the thing we all had to do for a while, pivot to online,” Meyer said.

That experience prompted her to think even more deeply about her service to the church, and she was “curious about what God is doing out here in rural, central Minnesota, with this call to have an agrarian ministry, and I land about 18 miles away from Trinity.

“We should be open to what God might want us to consider,” Meyer continued, and she realized “that might be ‘calling me’ to take on more as the parish priest. I always joke with the vestry. … I don’t really need another job, but I love the folks at Trinity.”

One of the enduring images for Meyer is a photo she saw of a banner promoting the church’s monthly free hot lunch. The meal traditionally serves about 100 people from the Litchfield area, she said, and it is a significant undertaking that illustrates the giving nature of a congregation with less than a quarter of the number of people served.

It’s that faith environment she looks forward to interacting with as the priest-in-charge.

Trinity Episcopal will continue to be served by its supply priests — the Rev. B. Furniss, the Rev. J. Hoover and the Rev. F. Nairn — while Meyer will be the local presence, preaching at the church as well as participating in other congregation and community events, including being part of the worship rotation at the Ecumen of Litchfield chapel.

“There are a lot of really amazing congregations in Litchfield,” Meyer said. “There are really committed pastors and communities of faith.”

She said she views her role at Trinity as one of strengthening the faith of the current congregation, while concentrating on two of the Episcopal Church’s areas of focus, creation care and racial reconciliation.

“If you were asking me to plug Trinity … that’s what our community and tradition has to offer,” Meyer said. “A faith tradition grounded in scripture and strengthened by the sacraments. … Kind of traditional, but also kind of trying to find a new way forward as the church.”