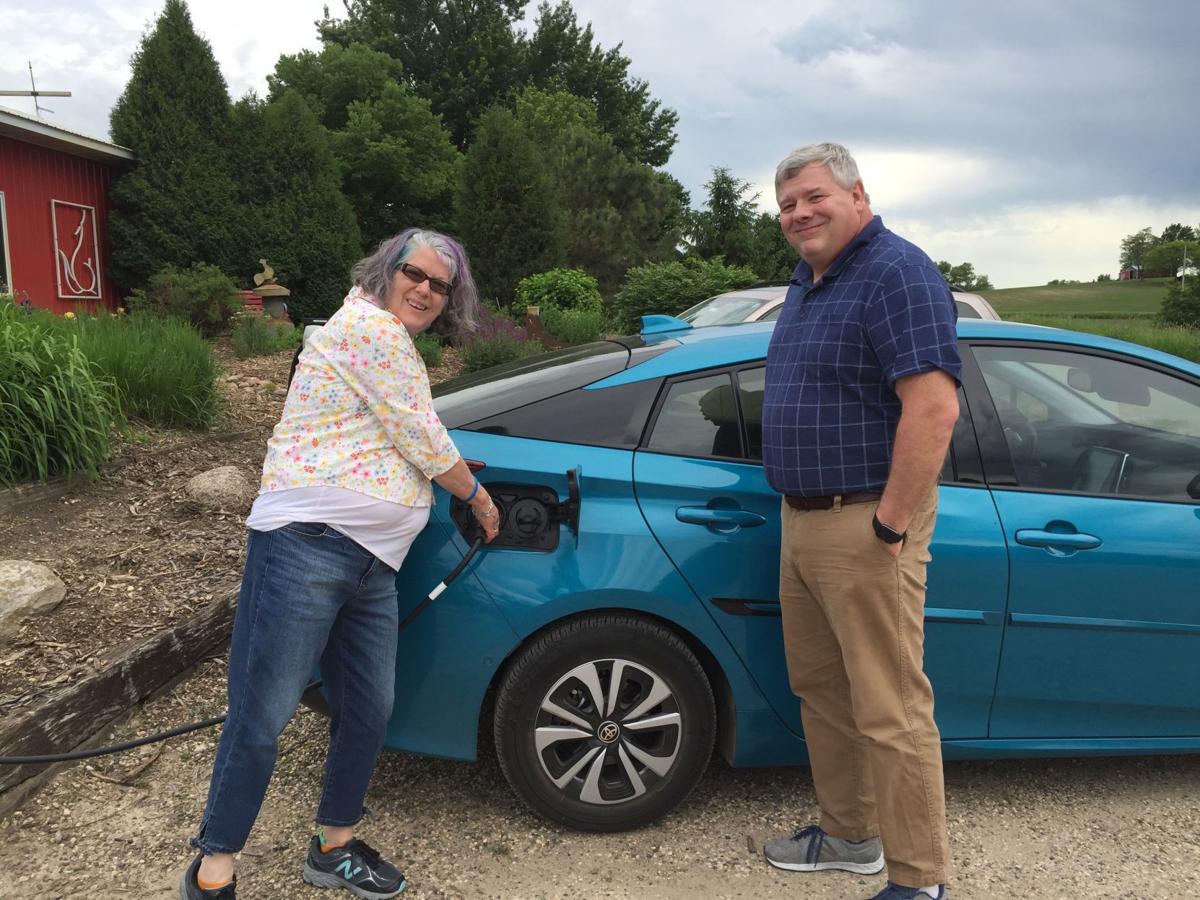 Dale and Debbie Hallin of Minneapolis fueled up on electricity at Clay Coyote Gallery and Pottery Studio north of Hutchinson. 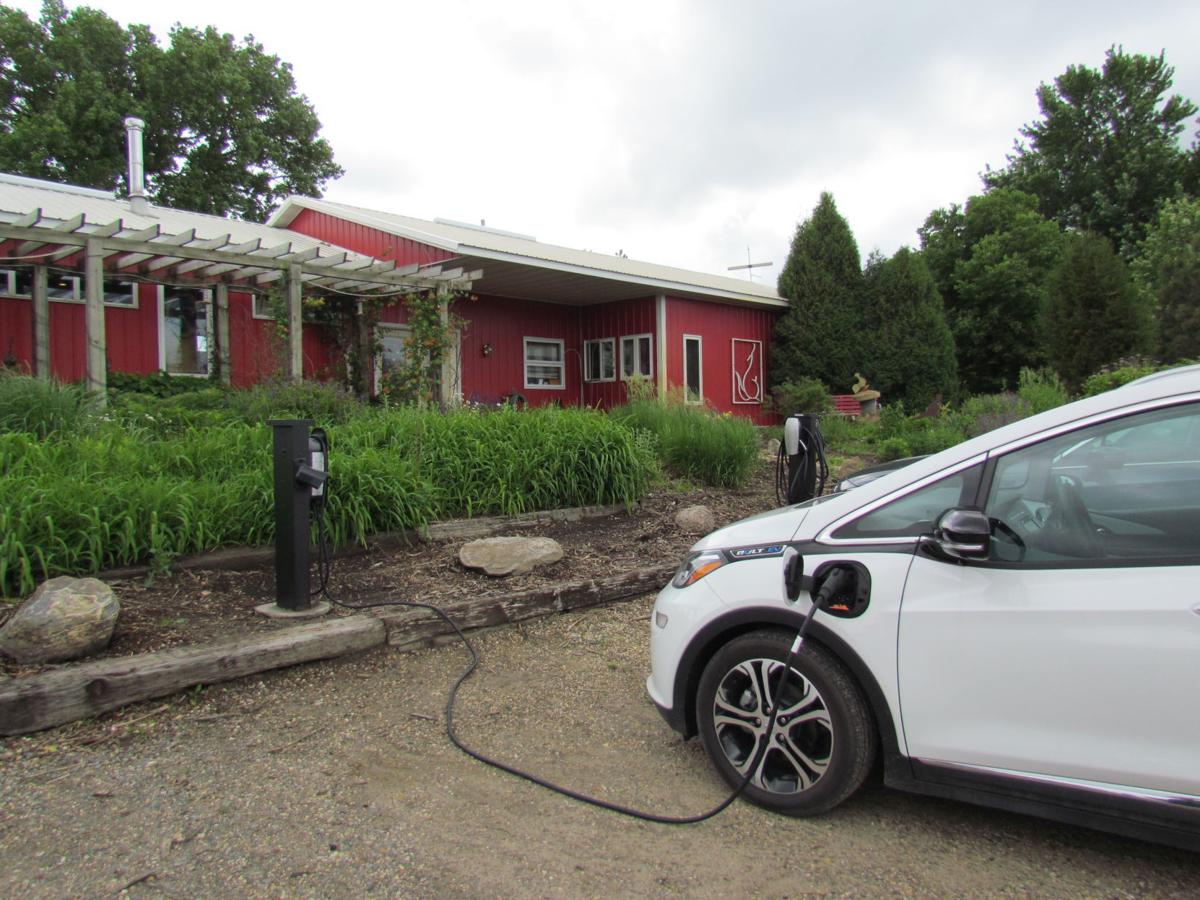 Clay Coyote is home to two Tesla chargers and one universal charger for electric vehicles. Using one of the chargers looks similar to fueling up at the gas station.

Dale and Debbie Hallin of Minneapolis fueled up on electricity at Clay Coyote Gallery and Pottery Studio north of Hutchinson.

Clay Coyote is home to two Tesla chargers and one universal charger for electric vehicles. Using one of the chargers looks similar to fueling up at the gas station.

When it’s time to fuel up, most motorists don’t think it’s time to visit the pottery studio. But that’s exactly what owners of electric vehicles can do in central Minnesota just north of Hutchinson.

“We started promoting it on Facebook last week, so the first person came to use it Tuesday or Wednesday last week, and another on Friday,” said Morgan Baum, owner of Clay Coyote.

The first to visit for the charger were a husband and wife from Minneapolis.

“They were coming out to visit Hutchinson to visit family members, and the daughter said she had read we had chargers,” Baum said. “So they drove their Prius out and came shopping, and used the charger to charge up before going back.”

The idea came about in December, when a customer suggested Clay Coyote look into installing the charging stations. At the time, Baum was worried the investment would be out of the gallery’s price range.

“But we began researching the options and it turns out that Tesla has a program to fund installing chargers at interesting tourist destinations around the country,” Baum said.

It took a few months, and Clay Coyote was approved for the program. Tesla provided two Tesla specific chargers, and one universal charger. Though the installation was free, there is a cost in electricity for the chargers to be used, albeit a small one. Baum estimates a full charge on a vehicle — which is offered for free to the public— runs Clay Coyote 50 cents.

“We are thrilled to add this new amenity not to Clay Coyote, but to the Hutchinson area. To be the first destination charger in the region is a real point of pride for us,” Baum said.

Tesla maintains a map of chargers on its website, www.tesla.com. West of the metro, the nearest stations are in Clearwater, Montevideo and Redwood Falls. More can be found to the south on Interstate 90, but the station at Clay Coyote fills a gap on U.S. Highway 212, State Highway 7 and U.S. Highway 12.

As a full charge can take 45 minutes, visitors can use the time to check out the gallery, tour the working pottery studio, or walk the 30-acre conservation prairie.

Baum expects the popularity of electric cars will grow, as have hybrid vehicles that operate with gas, but use a chargeable battery as backup.

“Most major automobile manufacturers now have an option,” she said, adding that she had found five that were under $30,000, and an upcoming Tesla model is expected to be priced around $40,000.

“We’re happy to be on the front end of a consumer trend,” Baum said.

The addition of electric charging stations is part of a larger effort to add more sustainable energy initiatives, or “go green,” at Clay Coyote.

When Baum took over the business from Tom Wirt and Betsy Price as the second-generation owner, “we had a vision we were going to take Clay Coyote into the future,” Baum said. “Part of that was to go more environmental friendly and green focused.”

Previously, Clay Coyote used a renewable energy grant to change its light bulbs to a more efficient variety. It was that undertaking that prompted a customer to suggest the vehicle chargers in the first place.

“As we continue to look for more ways to go green, the next thing I’ll research (are) solar options,” Baum said.

Clay Coyote has three electric kilns and a gas kiln. At least one electric kiln runs every day of the week. The goal is to power them using solar energy.

“They are always fired up,” Baum said. “There are a lot of ways we can go greener and leaner at Clay Coyote.”