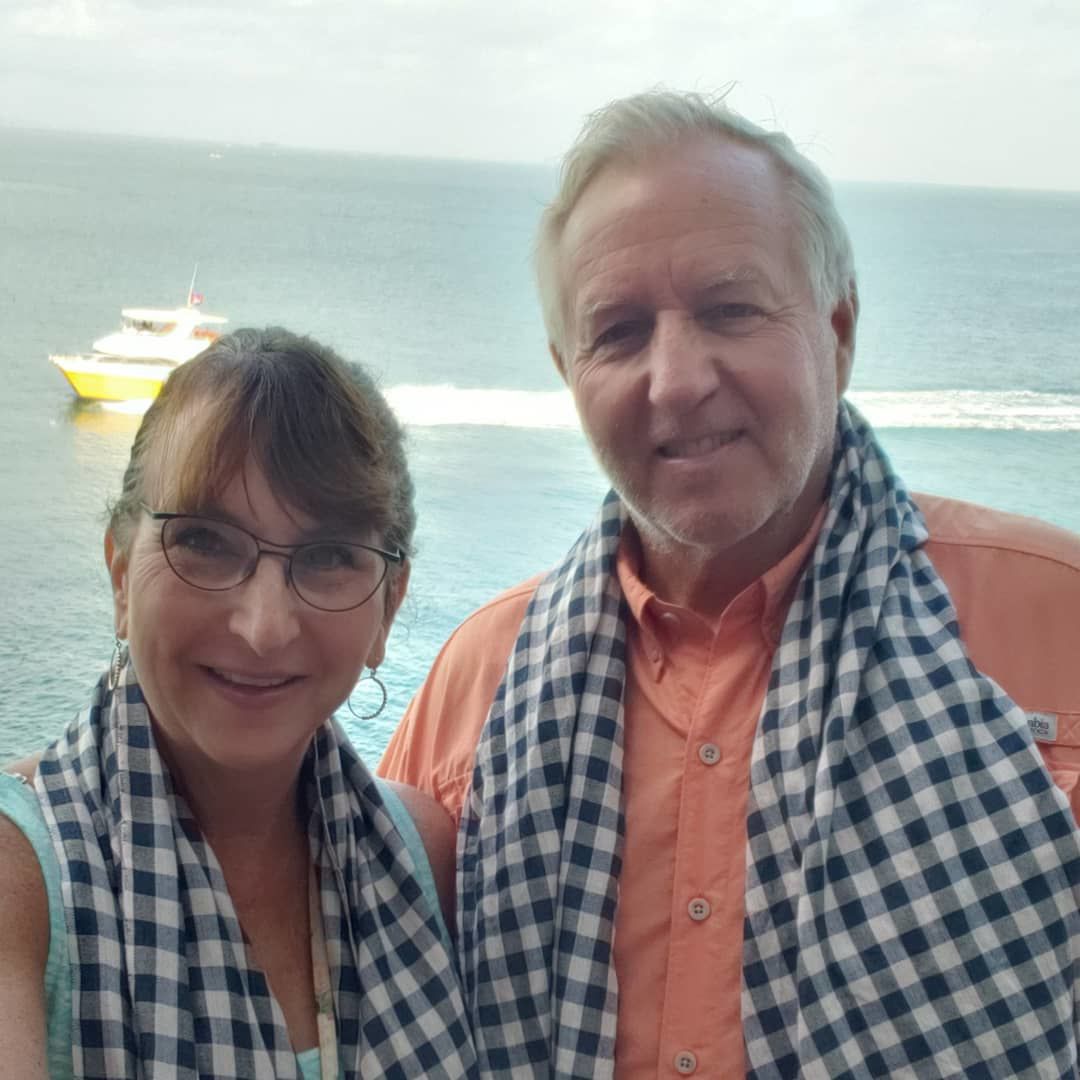 Pam and Steve Ahlgren enjoy a view of the sea in Cambodia, which allowed them and other Westerdam passenger to disembark after two weeks at sea. They’re wearing kramas, traditional Cambodian scarves, which were gifts from Cambodia’s prime minister.

Pam and Steve Ahlgren of Darwin stand near the bow of the Holland America Westerdam cruise ship, on which they were stranded for 13 days in the South China Sea over concerns of coronavirus contamination.

When Steve and Pam Ahlgren of Darwin began planning a 30-day Asian cruise last winter, they hoped to visit some of the places Pam’s father and mother had worked as missionaries many years ago.

They never imagined a viral outbreak of global proportions might disrupt their plans, but that’s exactly what happened. The Ahlgrens were passengers aboard the Holland America Westerdam cruise ship that in February was stuck at sea for two weeks as they were denied entry by multiple ports for fear of COVID-19 contamination, or novel coronavirus.

This was the second year the Ahlgrens, who are crop farmers and have time off in winter, planned a cruise with family members.

When the Ahlgrens boarded the Westerdam from Singapore Jan. 16, there was little concern about the coronavirus, which was still being studied by the Chinese National Health Commission.

The cruise went as scheduled for the first few weeks, making stops in Thailand, Cambodia and Vietnam. During this time, however, more information about coronavirus was coming out as it became a worldwide concern.

It was during their fourth planned stop that the Ahlgrens first started having concerns.

“Everything was absolutely smooth and we didn’t hear any word of the virus until we got close to Hong Kong,” Pam said.

Ahlgren said she and her family had planned to explore Hong Kong during their stay, but they decided to stay on the ship when they heard news that the outbreak had caused many areas of the city to be closed.

“They did let some people off, and we had some people get on, which was a little concerning to us,” Pam said, “but they had to go through health screening.”

The next planned stop was Manila, but that’s when the trouble started. The Philippines denied the ship from making a scheduled port call. They were subsequently denied entry by Japan, South Korea, Guam, Vietnam and Thailand.

“They even sent a military ship out to make sure we didn’t dock,” Pam said about Thailand’s response to the cruise ship. “That was really disconcerting. As you’re looking out you see this military ship circling your ship.”

For 13 days, the Ahlgrens were stranded in the South China Sea along with the other 2,257 people onboard the Westerdam. Fortunately, the passengers were assured that there were ample supplies to withstand a long departure from land.

“The captain said we had plenty of food and fuel,” Pam said. “Somebody did say they ran out of ketchup, but that’s not an emergency.”

While passengers suffered minor inconveniences such as depleted condiments, Pam described the two-week voyage as an inconvenience rather than a major concern. The ship’s medical team twice required passengers to have their temperatures taken to monitor signs of the virus, but otherwise people were free to roam the ship.

“My dad went through seven books. I read a lot, I think I was on my fourth book,” Pam said. “The weather was super nice, but it was like my husband said, ‘What side of the ship should we see today?’ You just get a little stir crazy because you want to get on land. You’re just kind of cooped up.”

“Everybody cheered,” Pam recalled, “because we were wondering where we would go. It was just a feeling of, ‘Now we can actually go home.’”

The prime minister even visited the ship himself via helicopter and gifted each of the passengers a Cambodian scarf known as a krama.

Although the passengers were now on land, their trials were not complete. When they arrived at the airport in Phnom Penh, they learned they would not be able to fly home. Connecting airports such as South Korea, Thailand and Malaysia would not allow the passengers into the country.

The Ahlgrens and others were put up in a hotel along with ambassadors from multiple countries representing those stranded in Cambodia. Holland America’s president also visited the passengers to assure them everything was being done to get them home, and the Ahlgrens credited the cruise line and its workers for taking care of the passengers’ needs throughout the ordeal.

The passengers received one final scare when an 83-year-old woman tested positive for coronavirus. While that ultimately turned out to be a false-positive — nobody aboard the Ahlgrens’ ship was ever found to have contracted coronavirus — the passengers were subjected to a battery of medical tests from workers in hazmat suits.

“The nose swab,” Pam said, “I swear they were trying to get brain matter because it was very uncomfortable.”

When the tests all came back negative, Holland America resumed trying to find flights home for its passengers. People were told to stay in the hotel and be prepared to leave at a moment’s notice.

“Within an hour you had to be ready to go, because they didn’t know which country would let us fly to transfer,” Pam said.

After three days in Cambodia, the Ahlgrens were told Feb. 18 they would be heading home. Their flight connected through Tokyo and San Fransisco, and finally arrived in Minnesota. As soon as they landed in the U.S., Pam said, they received a phone call from the Minnesota Department of Health, which was tracking their passports.

“I said we were feeling fine and they said, ‘Yes, we got your report from the Cambodia Health Department and they said you’re all healthy,” Pam said. ‘“There’s no reason to be quarantined.’ … And I thought, ‘Wow, they’re watching all this stuff.’”

While the coronavirus outbreak changed their plans, ultimately the Ahlgrens said they didn’t let it ruin their vacation. They were also happy with how it was handled by Holland America.

“Like my dad said, it was a great trip,” Pam said, “it was just a little unexpected toward the end.”

The couple have already begun making plans for a South American cruise next year.

“The captain said we had plenty of food and fuel. Somebody did say they ran out of ketchup, but that’s not an emergency.”