Attendees of the Sept. 4 dedication ceremony of the Kingston Wildlife Management Area gathered for a photo. 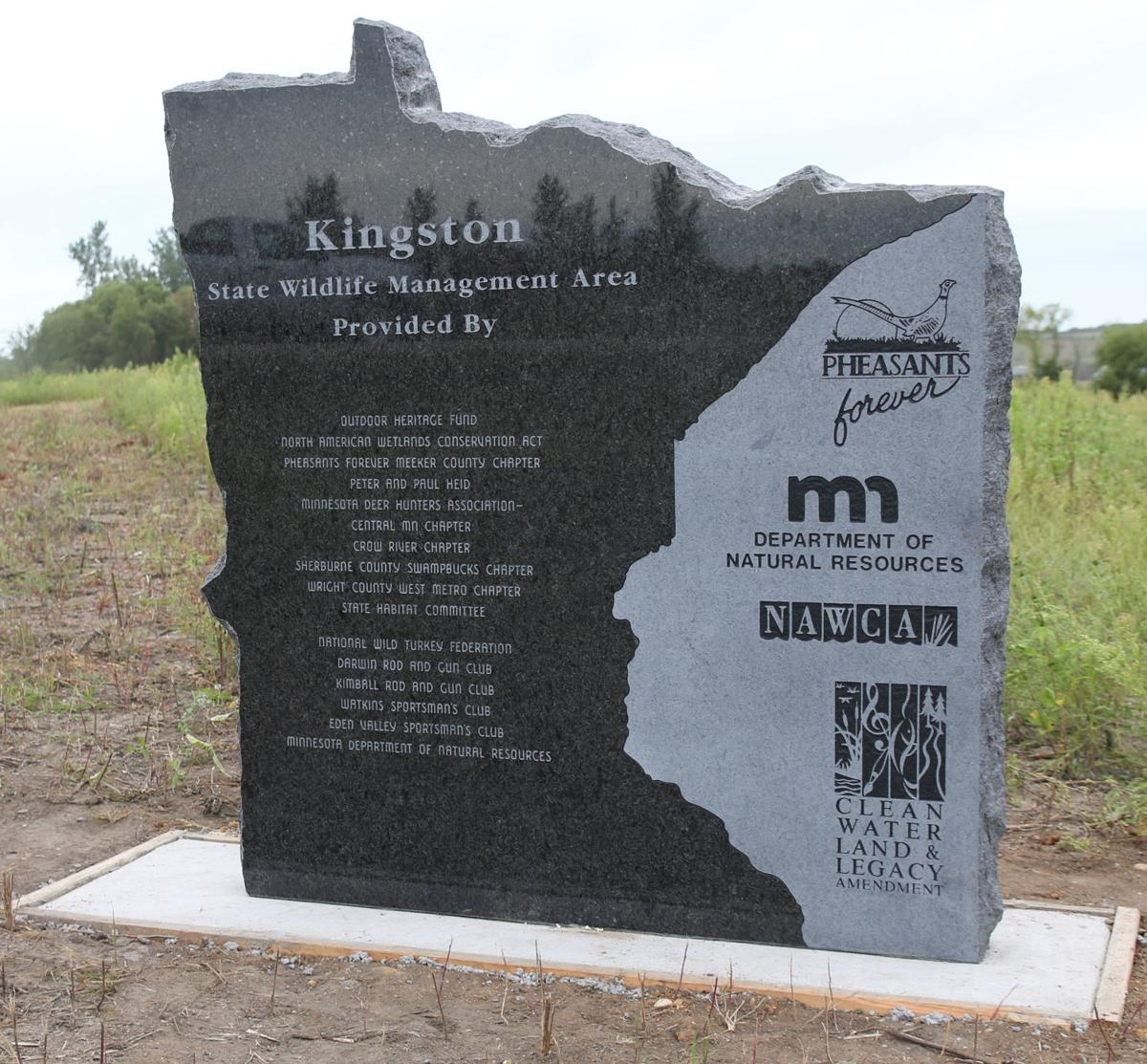 Pheasants Forever established this monument Sept. 4, which lists all the contributing partners and organizations that made the purchase of the Kingston Wildlife Management Area a reality.

Attendees of the Sept. 4 dedication ceremony of the Kingston Wildlife Management Area gathered for a photo.

Pheasants Forever established this monument Sept. 4, which lists all the contributing partners and organizations that made the purchase of the Kingston Wildlife Management Area a reality.

Nearly 40 people gathered to dedicate a 625-acre tract of land in Meeker County as a state wildlife management area Sept. 7.

The dedication came after the Meeker County chapter of Pheasants Forever purchased the $2.1 million property southwest of Kimball. The land, known as the Kingston Wildlife Management Area, is the largest wildlife area in the county open to the public for hunting pheasants, deer, turkey, ducks or rabbits, or to simply enjoy the wildlife experience.

State Rep. Dean Urdahl said that he’s heard from people concerned about preserving the land in Meeker County over the years. During the recession in 2008, Minnesota’s voters passed the Clean Water, Land and Legacy Amendment to the Minnesota Constitution. The amendment seeks to protect drinking water sources, to protect, enhance and restore wetlands, prairies, forests and fish, game, and wildlife habitat, to preserve arts and cultural heritage, to support parks and trails, and to protect, enhance, and restore lakes, rivers, streams, and groundwater.

“I think this is a unique piece of land that the future generations will appreciate,” Urdahl said. “Particularly this one is an excellent example of what the Legacy Amendment was all about, and what it should and could do. ... A tremendous example of cooperation between the state, non-profits and groups, sportsmen to get 625 contiguous acres … to preserve it for the future.”

The land acquisition funds came from the Legacy Amendment and North American Wetlands Conservation, which each contributed $650,000. An additional $110,000 was raised for habitat improvement, parking areas, fencing, signage and more.

A great deal of thought went into the purchase of the land, said Matt Christensen, regional representative of Pheasants Forever for western Minnesota. Christensen and his colleagues, including the Minnesota Department of Natural Resources, examined if there were good reasons for making the land a public wildlife preserve.

Rare historical prairies and wetlands exist on the land, according to Cory Netland, a biologist and area wildlife supervisor for the DNR.

“They’re native,” he said. “They haven’t been broken up and they’re down along the edges of the wetlands here. ... And they’re native prairie that’s been that way since pre-European settlement in this area.”

The so-called remnant prairies are rare due to farming, development or trees that may have overtaken the area, he said. Less than 2 percent of such prairies remain across Minnesota, which makes it the most endangered habitat type in North America, according to the DNR website.

— Sarv Mithaqiyan is a reporter for the Leader’s sister newspaper, the Litchfield Independent Review.

The following are contributing partners: