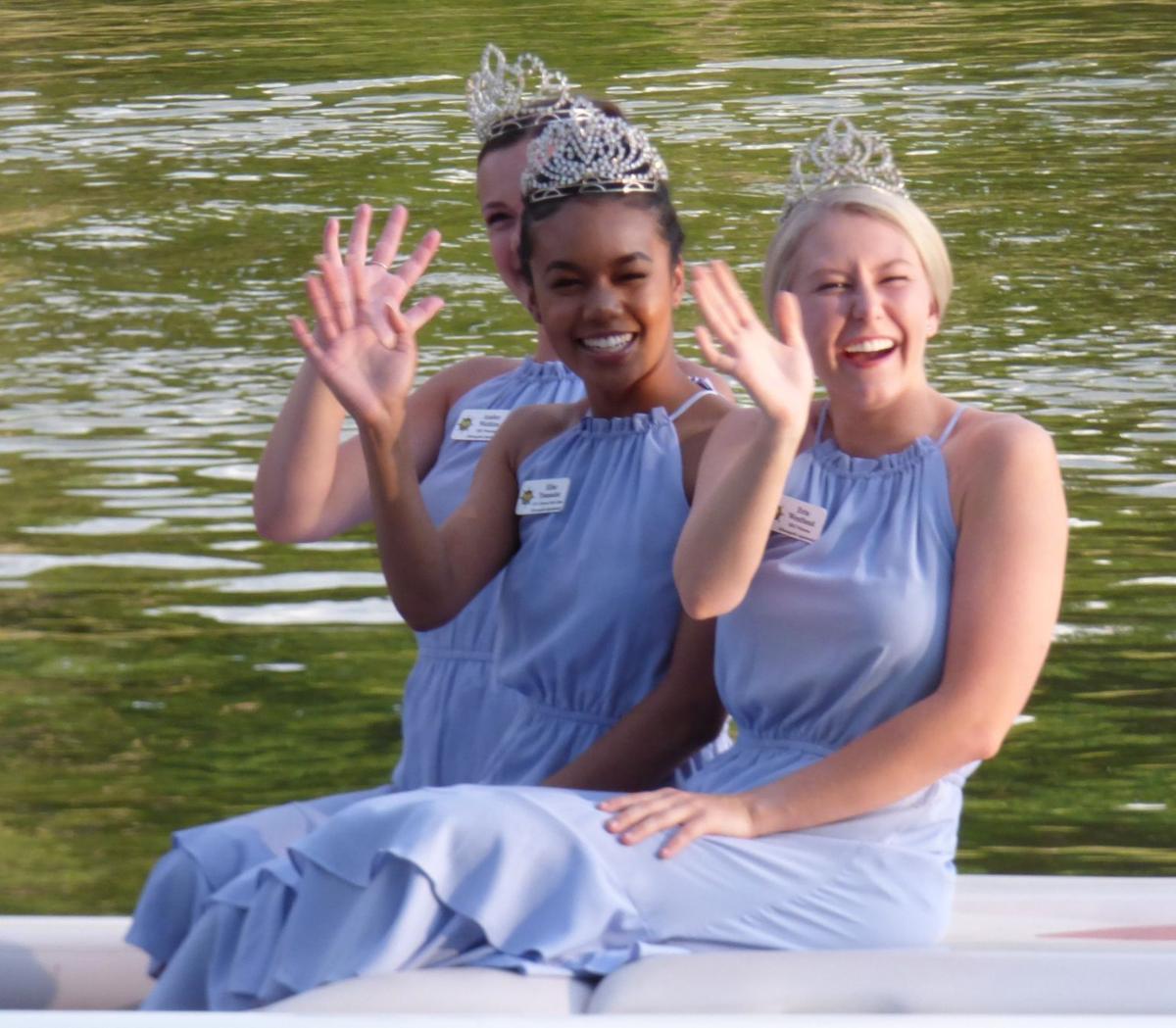 Aquatennial Princess Erin Westlund of Hutchinson, right, greets the crowd during the Hutchinson Jaycee Water Carnival boat parade this past June. Joining her is Queen of the Lakes Elise Toussaint, center, and Princess Amber Watkins. 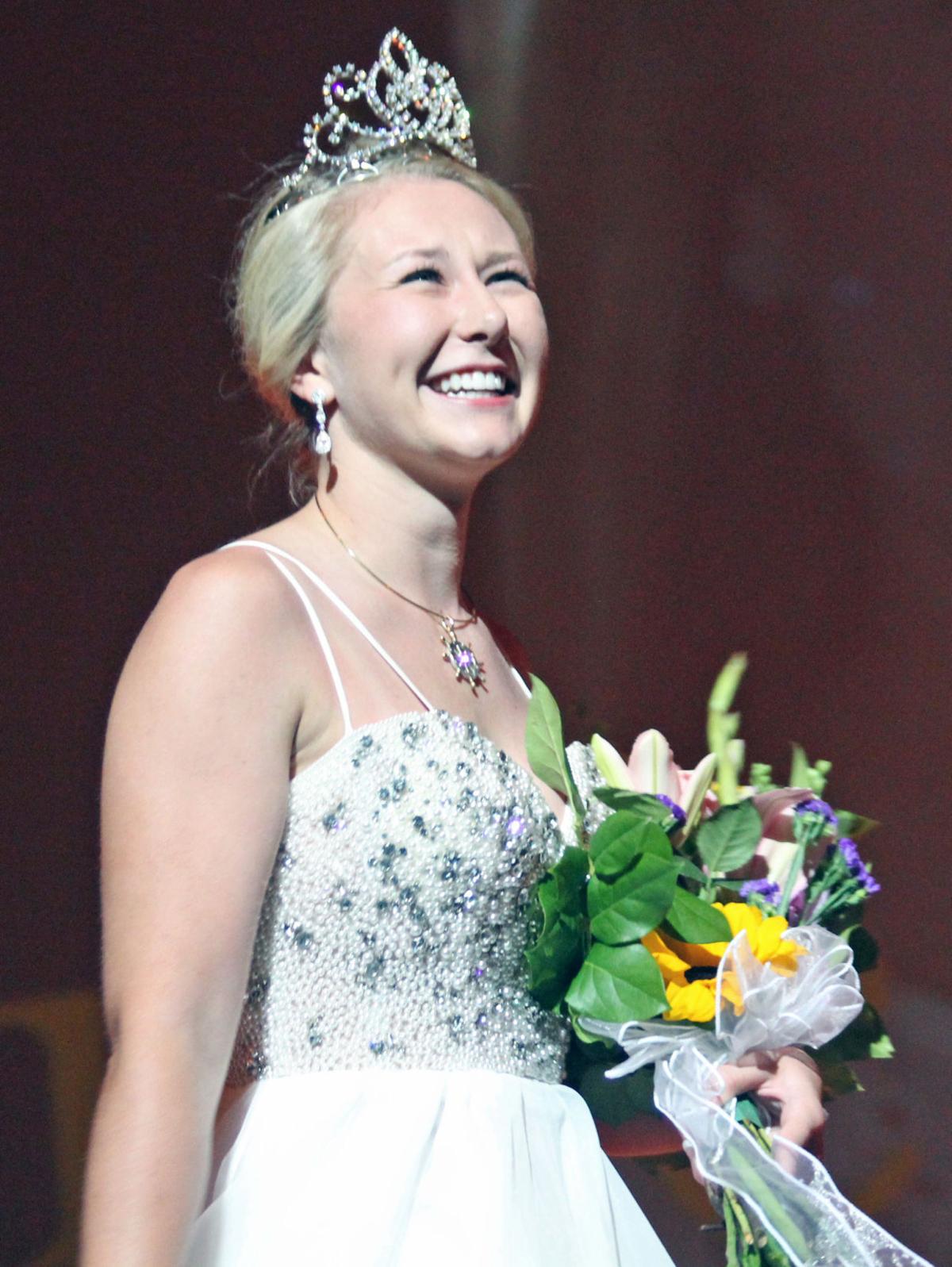 Aquatennial Princess Erin Westlund of Hutchinson, right, greets the crowd during the Hutchinson Jaycee Water Carnival boat parade this past June. Joining her is Queen of the Lakes Elise Toussaint, center, and Princess Amber Watkins.

With a million-dollar smile that lights up a room and a warm, engaging personality that turns strangers into friends, Erin Westlund is a winner.

The Hutchinson native was voted Hutchinson High School Homecoming Queen in 2015. She was selected as Miss Hutchinson and Hutchinson Jaycee Water Carnival Miss Congeniality in 2018, and in 2019 she was named as one of two 2020 Minneapolis Aquatennial princesses.

“I cannot say enough good things about it,” Westlund said of her Aquatennial experience. “One thing I love so much is when I get to travel. Part of my job is to recognize volunteers in each community, recognizing volunteerism. I just know how valuable our volunteers are in our communities. My grandfather and my dad were both (Water Carnival) commodores. They passed that love of volunteering to me. I plan on coming back to volunteer with Water Carnival. I know how important these festivals are and to keep them going.”

The Aquatennial royalty shares 250 public appearances during their one-year reign. The trio of Queen of the Lakes Elise Toussaint, and Princesses Amber Watkins and Westlund, together or separately, traveled to communities all over Minnesota and out of state to celebrate their festivals and create relationships between those communities and the Minneapolis Aquatennial.

“I literally get chills when I think about Pasadena Rose Bowl,” she said. “It was the coolest thing. I love learning the history behind all these festivals. In Pasadena, how the family is connected to the Rose Bowl. To see the history and how much love there is for those traditions.”

No one expected a worldwide pandemic to disrupt Aquatennial plans, but that's what happened. The last event Westlund attended was the Maple Lake Irish Party in March 2020.

“It was very weird,” she recalled. She wondered what was next. “It really changed some of my plans,” she said. “That's life. It taught me to go with the flow and live in the moment.”

With festivals and events canceled, Westlund and the other Aquatennial royalty turned to volunteering locally.

"During COVID, we were doing more in Minneapolis, in schools,” she said. “We ended up doing Minneapolis Meals on Wheels and Feed My Starving Children (food packaging events). During the 2021 St. Paul Winter Carnival, we (Aquatennial royalty) competed against them (St. Paul Winter Carnival royalty) in a Feed My Starving Children packaging event. We won.”

From now until July 24 and the crowning of the new Minneapolis Aquatennial royalty, Westlund is booked with personal appearances at festivals and events.

"We really get immersed in every community we go to," she said. "That's what I love about it. We really get to learn about the community. I've met so many people — volunteers, royalty, family — you meet so many wonderful people and hear so many stories."

Westlund admitted it was a stretch for her to compete in the Water Carnival queen program. She wasn't comfortable speaking in a microphone and was uncertain what she would do for her talent.

"Going into it (the Water Carnival queen pageant), I was just so excited to be part of it," Westund said. "Growing up, I watched it and from an outside perspective it looked like so much fun. I knew it would be an awesome week and (I'd) have fun with the other candidates. I wanted to push myself hard to get up on stage and speak in a microphone."

Once she settled on her talent — interpreting a Tim McGraw song using American sign language — everything fell into place.

"I really wanted the experience of being a candidate," she said. "If you go into it with the end goal of wanting to be queen or princess, that can ruin the experience for you. I did it for the experience. The Miss Congeniality award, it meant so much to me. It was such a week. It was so fun to be a candidate. I would recommend it to anyone. My growth socially was amazing. That's what it's all about."

Following her reign as Miss Hutchinson, Westlund represented the community at the Ambassador Candidate Program during Aquatennial Week.

She, with more than 50 other winners from communities across the state, spent a week together where they participated in leadership, personal development, and other experiences while going through a rigorous selection process to become Queen of the Lakes or one of two Aquatennial princesses.

The candidates are judged in a number of areas including poise, professionalism, public speaking ability, current and future goals, education and co-curricular/extracurricular activities. Those selected to serve as Aquatennial Ambassadors travel throughout the United States representing the city of Minneapolis and the Aquatennial Festival. At the end of their year, each ambassador receives an educational scholarship in recognition of their service.

"It's such an honor to represent Hutchinson," she said.

It's a busy time for Westlund: graduating, Aquatennial, moving and starting her first professional job.

She graduated from the College of St. Benedict with a Bachelor of Arts degree in elementary education. Her next step: moving to Kremmling, Colorado, where she will teach third grade at West Grand Elementary.

One of the advantages of being a member of royal families is the opportunity to meet new people and learn about them. Her interview skills came in handy when she applied for her first teaching job.

“There's no talent requirement for the Aquatennial,” she said. “It's interview-based, very based on public speaking, conversation skills. I really love practice interviews. There were panel interviews, one-on-one interviews. They were throwing stuff at you the whole time to see how you go with the flow. When it came time to interview for my job, I thought, 'I have done this so many times.'”

When Westlund heads to Colorado next month, it will feel like she's going home.

"I grew up going out there with my family," she said. "It's like home to me. The beauty of the outdoors, there's something pulling me out there. Stars aligned. It was my first interview. Everything worked out very well. I'm very happy to be immersed in the outdoors. (I'm) excited for the next chapter."

Past Aquatennial royalty from Hutchinson

Erin Westlund joins six other Hutchinson women who were named past Aquatennial royalty:

CenterPoint Energy Torchlight Parade, 7:30 p.m. Wednesday, July 21: This signature event will illuminate downtown Minneapolis along Nicollet Avenue between Fourth and 12th streets with parade units, floats, displays, and marching bands through the heart of downtown. The parade will begin at 12th Street and run to 4th Street.

Target Fireworks, 10 p.m. Saturday, July 24: The Target Fireworks are considered one of the Top 5 annual fireworks displays in the country. Come early for Aquatennial Pre-Fireworks Festivities along the riverfront on West River Parkway near the Stone Arch Bridge beginning at 6 p.m. Live musical entertainment will include the Command Steppers, Dred I Dread and Annie Mack. The world-famous Zambelli Fireworks show with music begins at 10 p.m.

For a complete schedule of events, visit aquatennial.com.