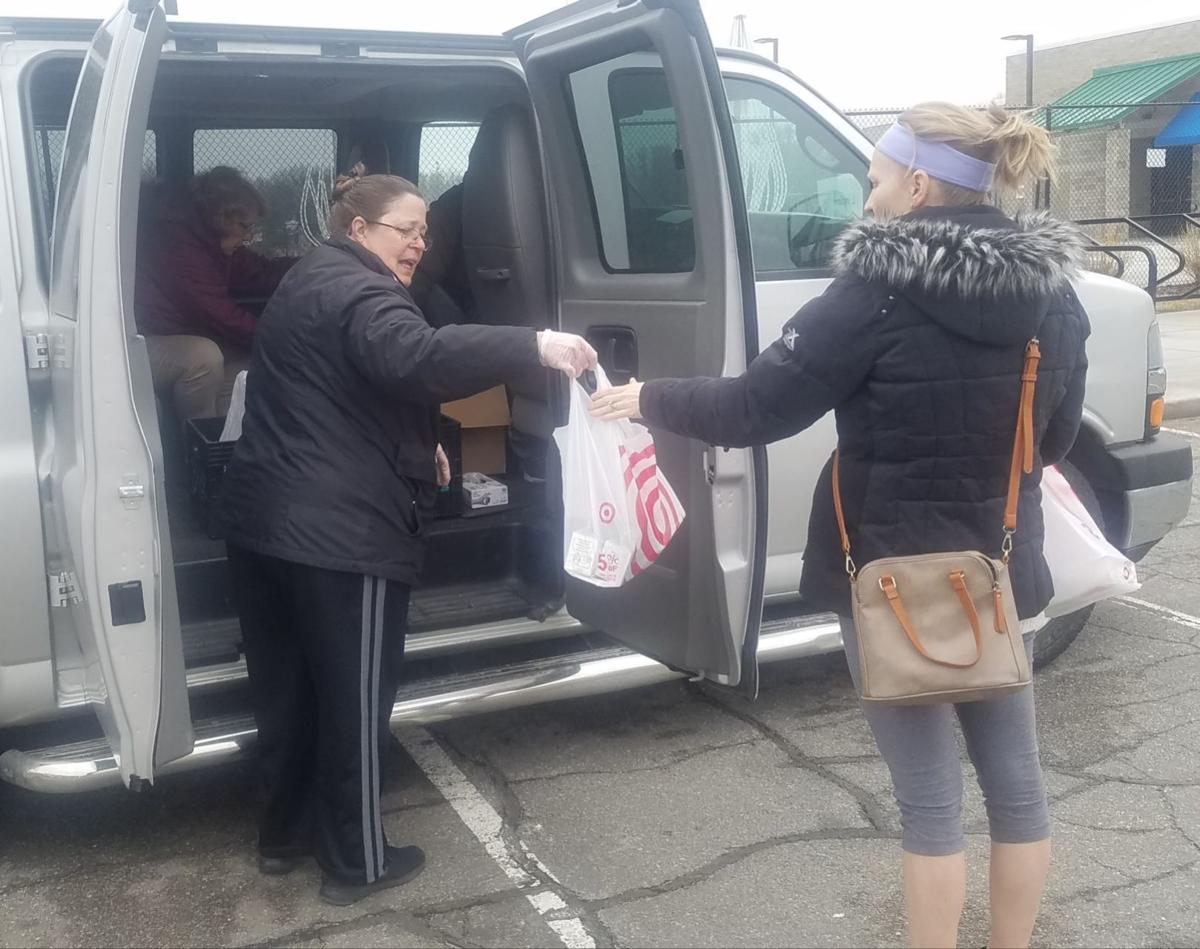 With help from Angela Young and Keith Enstad, Lore Lewerenz handed out meals for students at the Hutchinson Recreation Center parking lot Monday morning. On Tuesday, the school said many of the sites — including this one — would become “drive-thru” sites and asked people to stay in their cars. Schools are providing the service free to students missing school. 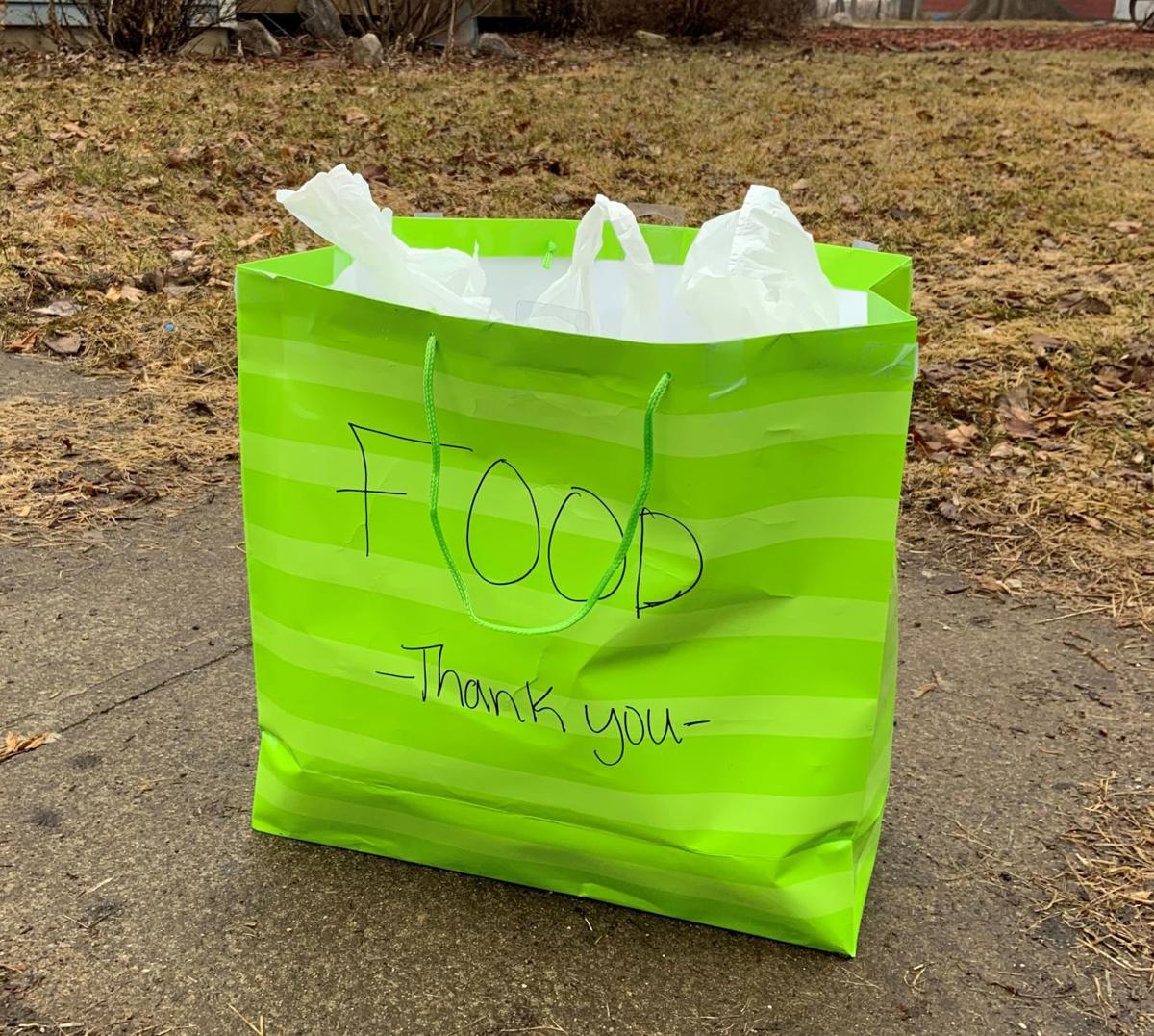 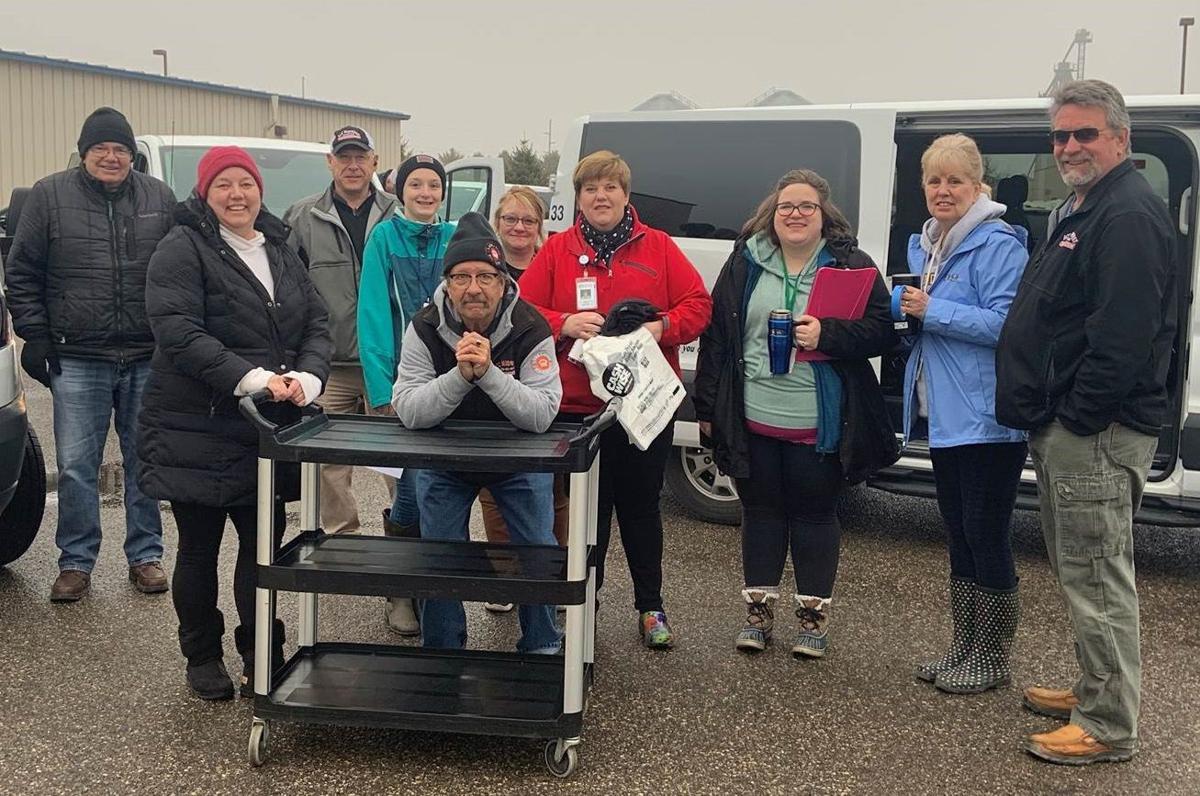 A group of educators and administrators at New Discoveries and drivers from Labraaten Bus Co. teamed up to deliver meals to students.

With help from Angela Young and Keith Enstad, Lore Lewerenz handed out meals for students at the Hutchinson Recreation Center parking lot Monday morning. On Tuesday, the school said many of the sites — including this one — would become “drive-thru” sites and asked people to stay in their cars. Schools are providing the service free to students missing school.

A group of educators and administrators at New Discoveries and drivers from Labraaten Bus Co. teamed up to deliver meals to students.

A small group of people briefly meeting in the Hutchinson Recreation Center parking lot Monday morning were in high spirits.

Lore Lewerenz, a cook at Hutchinson High School, was joined by education assistant Angela Young and Hutchinson Bus Line driver Keith Enstad as she handed free meals out to parents and students who climbed from their vehicles. Though everyone approaching was careful to take their distance and come only a few at a time, the meal delivery team kept the atmosphere positive as they offered the day's meal of taco in a bag.

"People are really grateful we are doing this," Lewerenz said. "So many people need it."

The meal delivery 11-11:45 a.m. every school day represents the approach Hutchinson Public Schools took to delivering meals to students following an executive order from Gov. Tim Walz that closed schools around the state. The order was one of many Walz has made in response to COVID-19. Families can order student meals for the following day through the school and pick them up from the indicated site. Seven sites around Hutchinson were selected for meal delivery, but two more were added Tuesday as demand has grown and more employees signed up to help. Meals are prepared by school cooks and are available to all children age 18 o younger.

"They have done a fantastic job to get this up and running the way they did," said Hutchinson Public Schools Superintendent Daron VanderHeiden.

"It's grown every day," VanderHeiden said.

Hutchinson's public charter schools, New Discoveries Montessori Academy and New Century Academy, are also delivering meals for students. At NDMA, staff developed a plan to deliver meals to homes with help from Labraaten Bus Co. On March 18, 36 hours after the order from Walz was received, educators, kitchen staff and administrators loaded breakfasts and lunches for 225 students into five vans, along with 450 cartons of milk. Two NDMA couriers and two Labraaten drivers delivered the meals in four hours. After a review of the plan, the time was reduced to two hours the following day.

"Overall, everyone is positive," she said, "and willing to pitch in and do whatever it takes. We have a great staff here."

Schools still have more than meal delivery on their plate. Though schools were ordered closed until March 27, Walz instructed them to use the time to create plans to deliver education to students at home for a longer period of time if necessary. This week, schools moved forward to set their plans in motion. They prepared a combination of digital resources and physical materials. On Tuesday, curbside material pickup was available at Park Elementary, Hutchinson Middle School and the Transition Assistance Program building. On Wednesday, March 25, it's available at West Elementary and Hutchinson High School. Parents picking up materials were asked to stay inside their vehicles and wait for a staff member to approach.

NDMA is also combining online and physical learning materials, and exploring plans to provide internet and digital devices to families who need them.

"We have plenty of technology here," Kinzler said. "It's just a matter of getting it to families."

All around Hutchinson, residents who can work from home are doing so to help promote social distancing and reduce the spread of COVID-19. But not everyone has that luxury.

Among those still facing the public are health care workers, first responders, law enforcement and others deemed "critical to the state's response." They, and "essential" workers such as educators, utility workers and food distribution workers, qualify for assistance from day care services Walz ordered schools to provide.

Sgt. Andy Erlandson of the Hutchinson Police Department is one worker benefiting from the 7 a.m.-5:30 p.m. service. Two of his children, age 9 and 6, are enrolled in the program at Hutchinson Public Schools.

"If it wasn't an option for my family I would have to stay at home," Erlandson said. "My wife is a nurse, so we're both essential employees."

The children are dropped off at Park Elementary, and the service has been easy for him to use.

Michael Scott, Hutchinson Public Schools director of teaching and learning, said the school is following social distancing practices, keeping students from congregating too close and using five rooms to make sure not to have too many students together at once. Activities for the students — kindergarten through age 12 — are rotated throughout the day so they don't spend the day doing one thing. One activity involves playground time.

"The staff did an awesome job in less than two days getting this organized, staffed and scheduled," Scott said. "I stop by three to four times a day. ... It's really amazing how it looks just like a school day."

The school nurse provides staff with up-to-date information on best safety and health practices, and instructs maintenance staff on the best methods to keep the school disinfected throughout the day.

The school also takes the temperature of kids in the day care twice daily. Those who may be sick must stay home.

"Just like during a normal school day," Scott said.

On Monday morning, Hutchinson Public Schools' service had 50 children. NDMA also had one family with a parent working in emergency services using the day care offering two days this week, and an essential worker sending a child every day.

VanderHeiden said it is unclear how the schools' services would be impacted if Walz makes a shelter-in-place order.

On Tuesday, Hutchinson Public Schools updated its list of meal pickup sites. In addition, it named "drive-thru" sites, and asked those picking up meals to stay in their cars when approaching. Pickup time is 11-11:45 a.m.

Due to the increased number of families requesting meals, if your meal is being delivered to your home, someone must go to the van to pick it up. Staff will no longer bring it to the door.