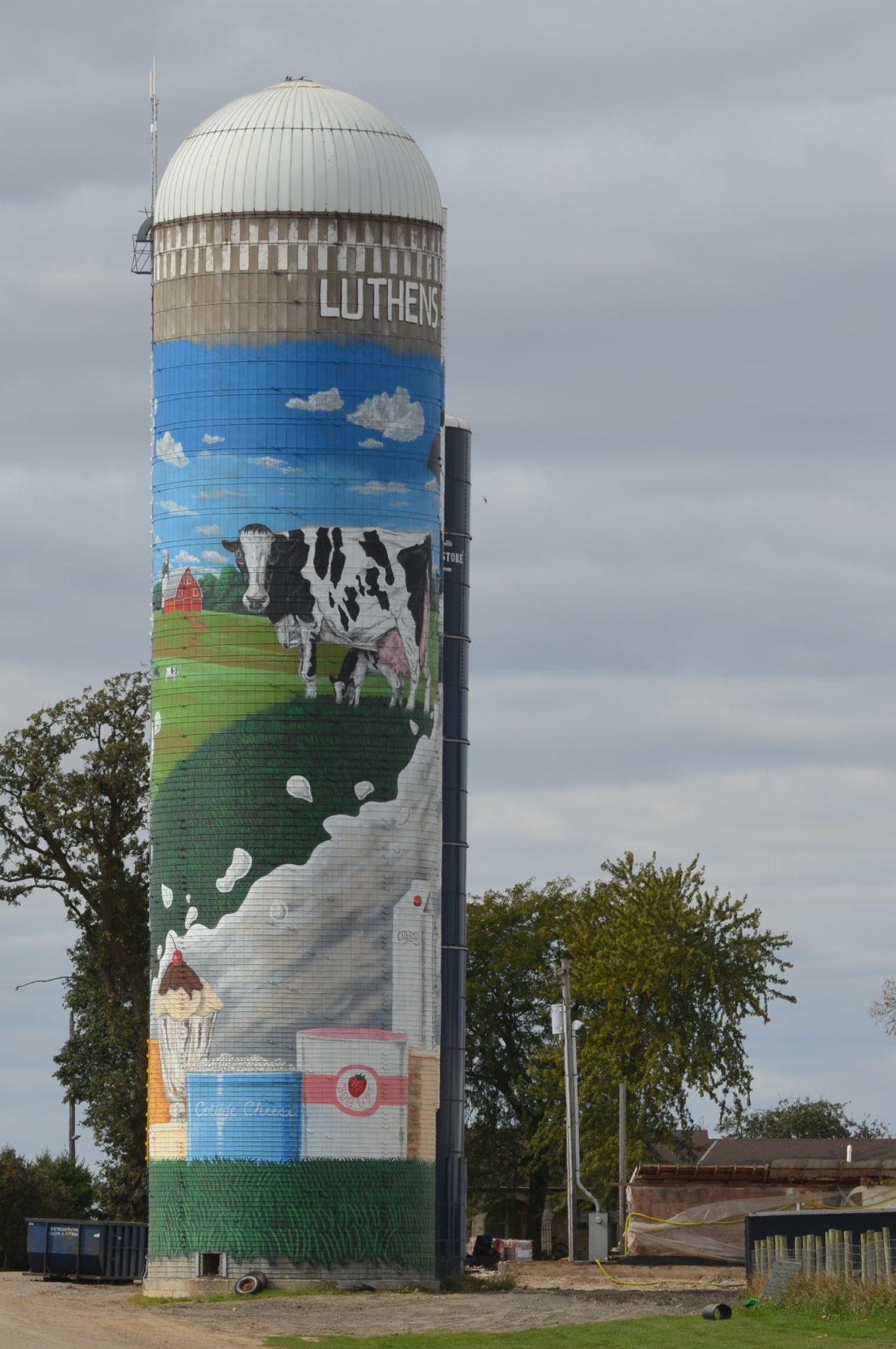 Dairy was the obvious theme for the new 100-foot silo mural at Skyview Dairy farm, east of Hutchinson. At the top is a cow grazing in a farm pasture, a callback to farm’s roots in 1969. The bottom of the mural features dairy products such as ice cream, cottage cheese, yogurt, and of course a geyser of milk splashing across the silo. 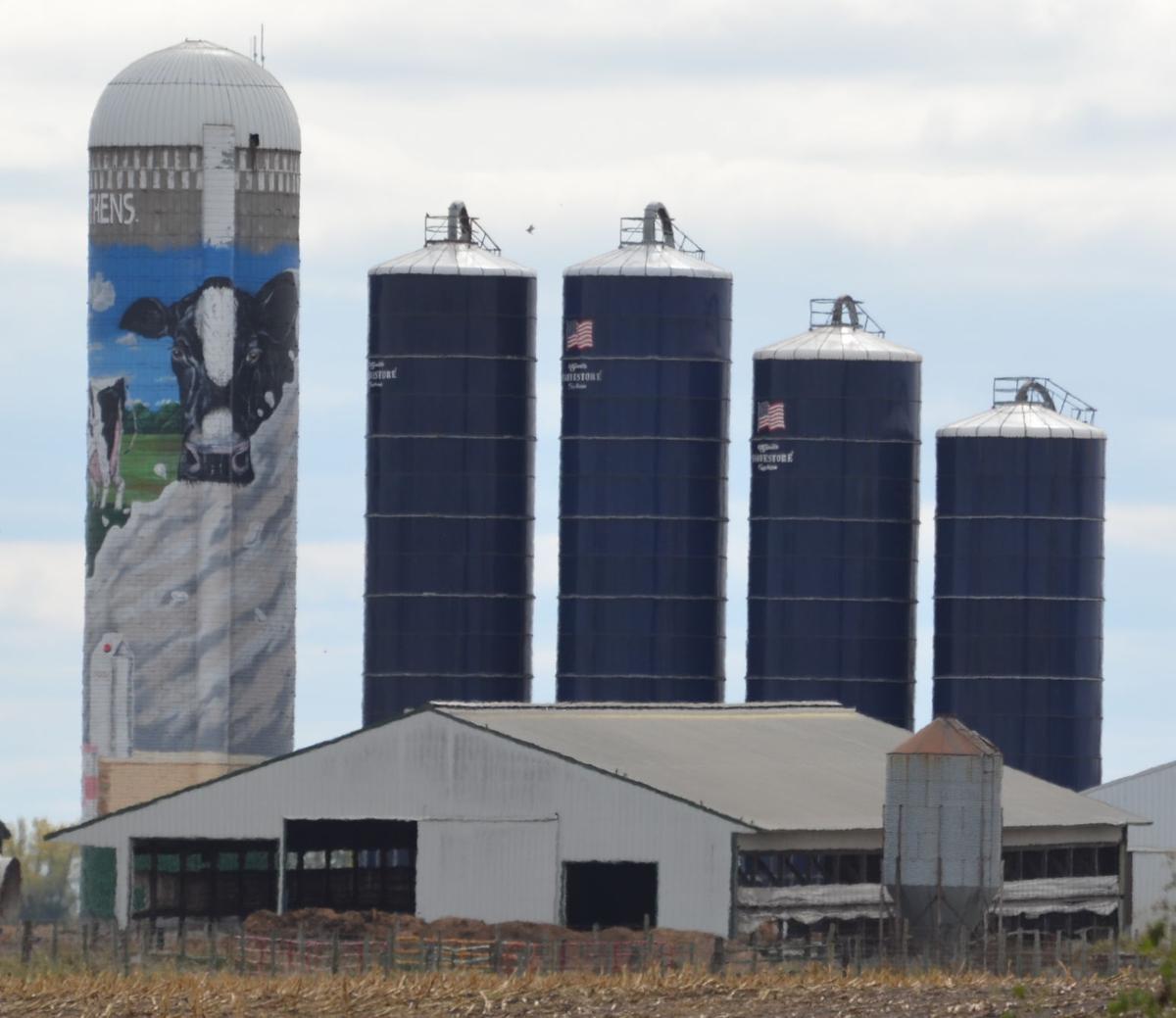 Cover photo: Artist Tony Stafki wanted to make sure motorists on State Highway 7 had something to see as well when they passed the mural, so a large cow head can be seen peering out over the barn, with the geyser of milk wrapping around the silo. 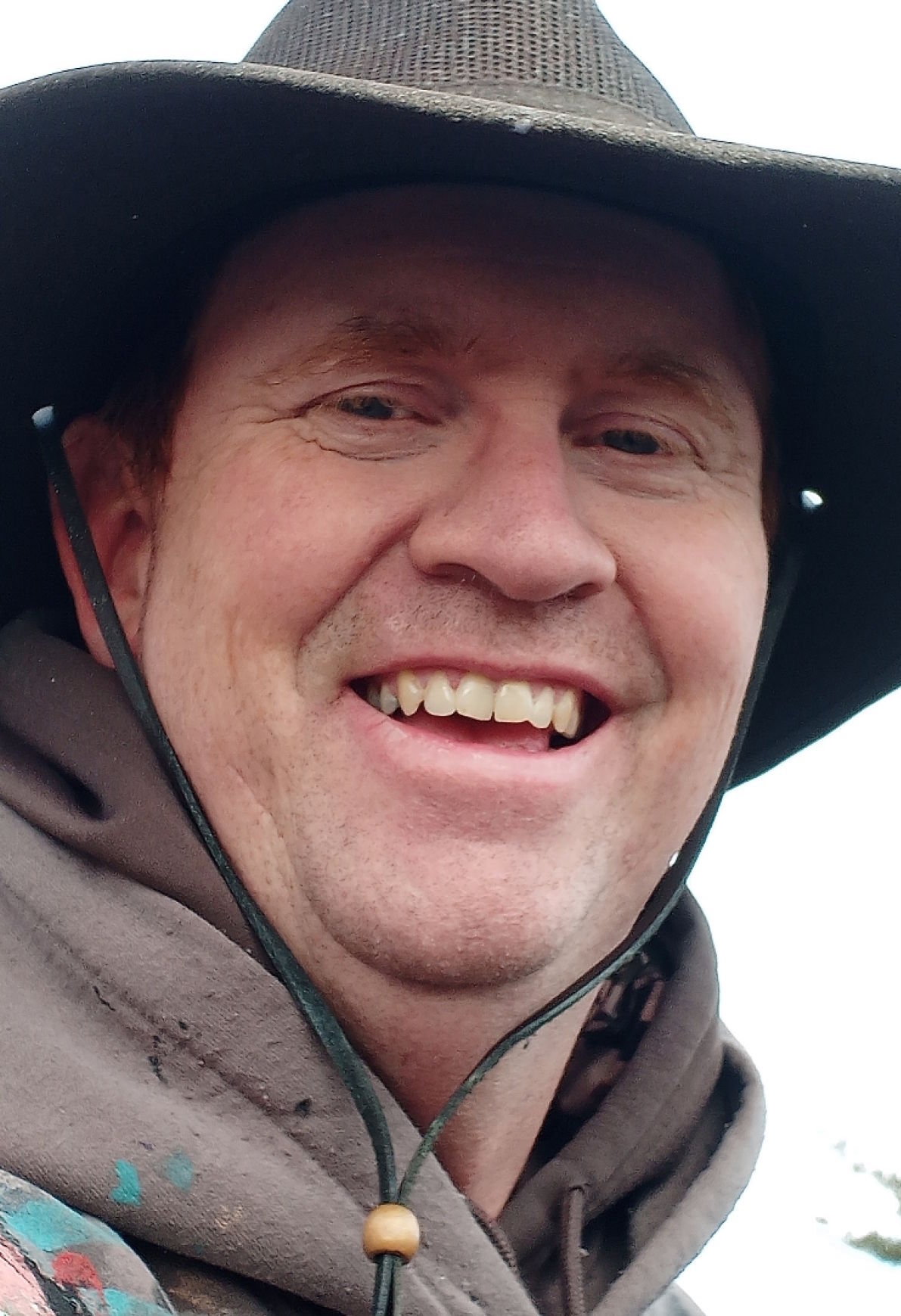 Dairy was the obvious theme for the new 100-foot silo mural at Skyview Dairy farm, east of Hutchinson. At the top is a cow grazing in a farm pasture, a callback to farm’s roots in 1969. The bottom of the mural features dairy products such as ice cream, cottage cheese, yogurt, and of course a geyser of milk splashing across the silo.

Cover photo: Artist Tony Stafki wanted to make sure motorists on State Highway 7 had something to see as well when they passed the mural, so a large cow head can be seen peering out over the barn, with the geyser of milk wrapping around the silo.

A 100-foot tall cow east of Hutchinson has created quite a bit of chatter about Skyview Dairy.

The cow itself is not real. It’s part of the new mural painted on the Luthens farm’s 37-year-old retired silo. The project took five weeks and about 50 gallons of paint to complete, but the attention it’s grabbing speaks for itself.

“It turned out better than we could have imagined,” said Melissa Luthens, a member of the family-run business who led the mural project. “Tony did a great job.”

Tony Stafki is the Minnesota muralist responsible for this piece of modern agriculture art that is now part of the scenery along State Highway 7. He’s an Oak Grove native who started out in software engineering and painting building interiors. Then about 13 years ago he made the jump to full-time muralist.

“I’ve always loved doing art,” Stafki said. “I knew I could draw when I was 5 years old. I was doing regular house painting on a job and I saw a muralist on the job site working, and just right away I was like, ‘That’s what I gotta do.’”

Stafki’s work has taken him across Minnesota and the Midwest, and as far as New York and Texas. He does everything from small jobs inside homes to a 10,000-square-foot mural in Shakopee he completed in 2015.

Locals would most likely recognize Stafki’s work inside John Deere dealerships, where he’s done more than 20 murals in places such as Glencoe’s Midwest Machinery. It’s for this work, he believes, that he was recommended to the Luthens family.

“We don’t use any of our silos anymore, and we will hopefully have all the blue ones taken down at some point,” Melissa said. “So it was a question of what to do with the big cement one. We thought about taking it down, too, but then came up with the idea of having a mural painted on it. We reached out to Midwest Dairy and they put us in touch with Tony.”

Although he’s done many murals in the past 13 years, this project was unlike any other Stafki had taken on for one obvious reason.

“I had never done anything 100 feet high before,” he said. “I had done 40 feet and worked lifts and stuff before, but nothing that high. So I took it on as a huge challenge.”

“I was definitely cautious,” he added. “I’m not one to go crazy. I got used to it and learned how to run the lifts at that height. … You had to get used to the wind and know at what point you have to come down if it’s too windy. I had a digital wind reader and all that. So there was a little bit of a learning curve, but I took it on right away as something that was an awesome, challenging canvas to put something on.”

When it came to a design for the mural, the theme was easy — dairy. But choosing how to incorporate different dairy elements was a collaborative effort between Stafki and Melissa.

“We wanted to do something that everyone could relate to, whether you grew up on a farm or have never been to a dairy farm,” Melissa said. “The top of the mural takes everyone back to our roots of where our farm started in 1969, when Daryl (Luthens) purchased it. He and the family had a vision to grow it to where it is today. The bottom of the mural reminds people of all the wonderful, delicious and nutritious dairy options that are out there that come from all dairy farms, big or small, first generation or fourth.”

Another important part of the mural’s design is its multiple scenes, so there is something different depending on the direction from which people are looking.

“There had to be one view from Highway 7, and one view from the dirt road that goes up to the mural from the east,” Stafki said. “So that’s how we broke it up, kind of like two scenes in one, all related as part of the same scene overall. So from Highway 7, people don’t just see half a scene and wonder, ‘What in the world is that?’ From Highway 7 they can actually see a big cow head over a big stream of milk.”

From Aug. 17 to Sept. 21, Stafki painted away, taking time off occasionally on windy or rainy days. With it finished, he’s proud of his work, and like most of his jobs, he’s grateful to have a piece others can enjoy.

“Whether it’s something in a kid’s room or a large, more public mural … they’re both kind of the same in that it’s just so nice to see people appreciate hand-painted art,” he said.

For those wanting to take a drive out past Skyview Dairy to see it for themselves, the Luthens family is excited to share their new mural with the public, but they ask folks to stay on Nickel Avenue and be mindful of their private driveway, especially during harvest as it’s a busy time of year and can be dangerous.

“It’s so exciting to see the positive feedback we’re getting already,” Melissa said. “Bringing agriculture and art together in one place and fitting into the art evolution of Hutchinson. At the same time, remembering that Hutchinson started as an agricultural community is important.”