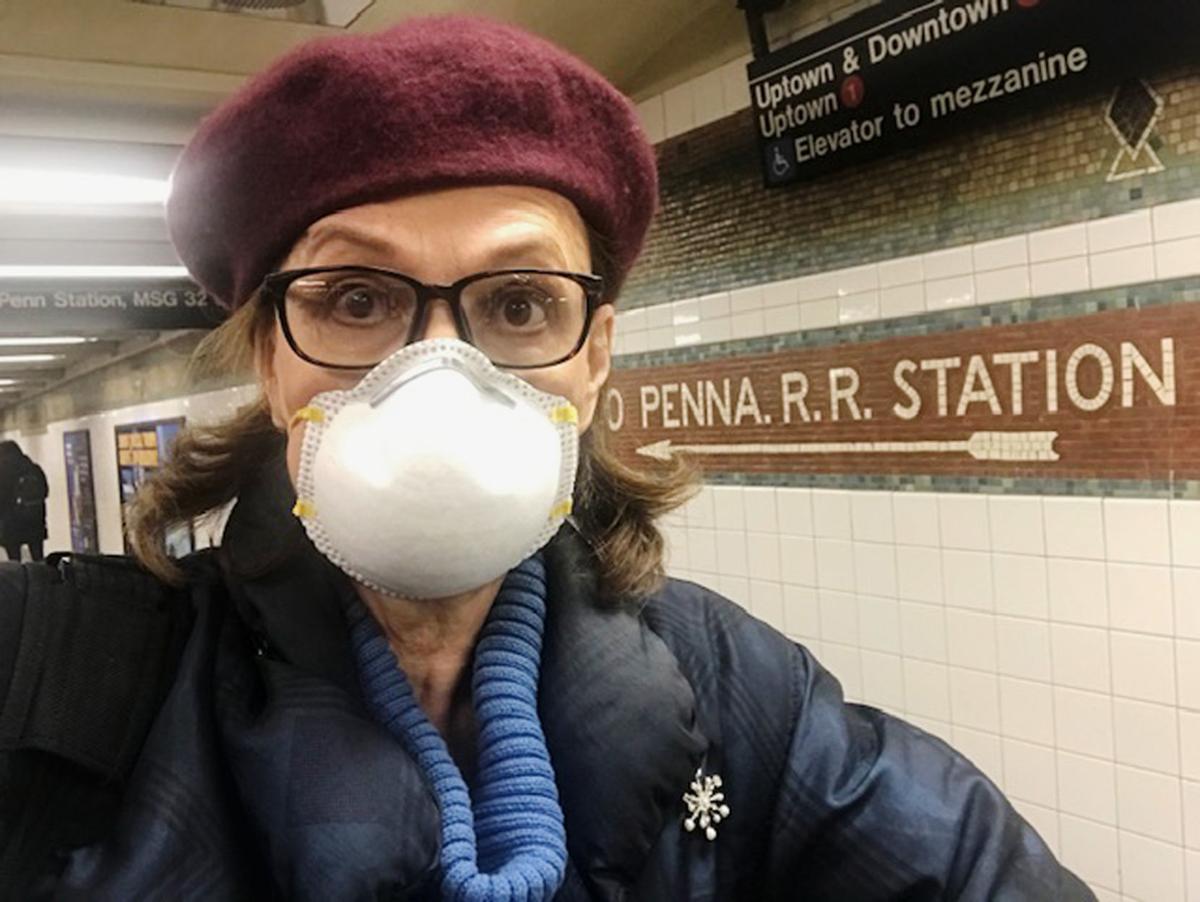 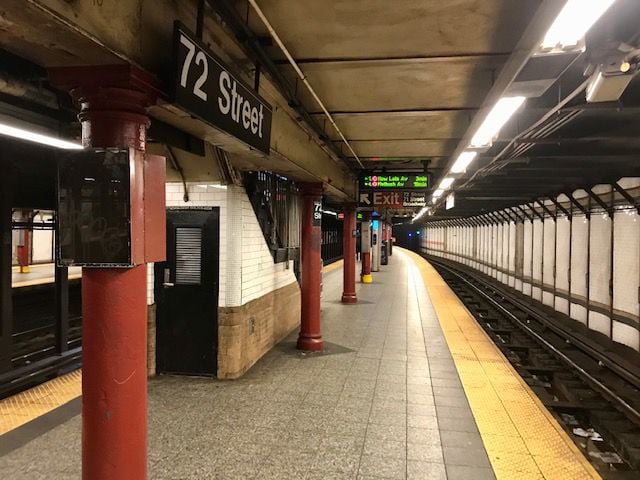 Deborah Jean Templin took this photograph of the empty 72nd Street subway platform. “There are always people on that platform,” she said. “It’s really packed from 8 to 10 a.m. and 3:30 to 6:30 p.m. This is the new normal in terms of the subway.” 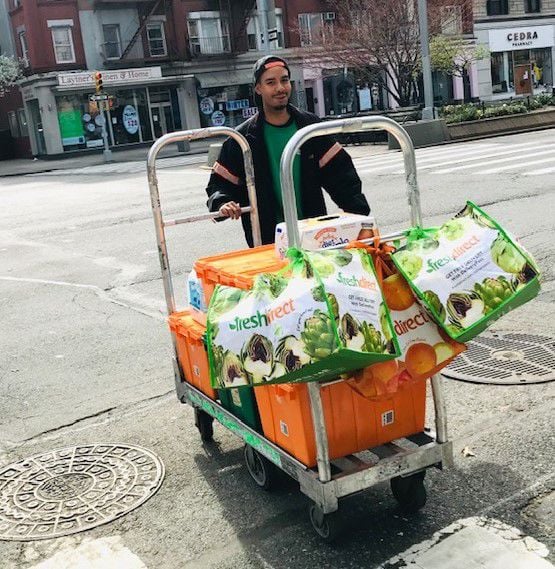 The street is empty as this FreshDirect worker delivers groceries. “Before (the pandemic), the truck might have parked in front of the house,” she said. “He can be in the street because there’s no people. You can see the crosswalk.” According to the FreshDirect website, the online grocery shopping and delivery service is “experiencing very high demand and long customer service waits.”

Although New York Gov. Andrew Cuomo hasn't issued a “shelter-in-place” order as of Monday for New York City, many people are practicing social distancing and opting to stay home when possible.

Glencoe High School graduate Deborah Jean Templin has called the Big Apple home for more than 40 years. She makes her living as an actress.

“Grocery stores are open. Hardware stores are open. Pharmacies are open,” she said. “Fruit stands on the street will close for two weeks. Our great Riverside Park constructed during Franklin Delano Roosevelt's administration ... is a great blessing for the people on the Upper West Side. Many people take a daily constitutional overlooking the Hudson River.”

Last week Templin said the police had to find a wedding in the basement of a structure in Brooklyn with 200 wedding guests and close it down.

“This is real and some people must not understand,” she said.

Templin is taking the pandemic seriously. She is spending her time at home as much as possible. The last time she attended church was March 15. She remembers hugging a friend. She wouldn't do that today. The last time she took public transportation was March 16. When she ventures out, she wears a mask and rubber gloves.

"People are thinking about how long the coronavirus stays on their clothes," she said.

Templin, who grew up on a farm, said it reminded her of going to the barn. She always changed clothes when she came into the house. The same is happening with COVID-19.

Another reason Templin is staying home is because Broadway has shut down and she can't go to auditions.

"I love auditioning," she said. "To me, it's kind of like going to the County Fair. Everybody looks their best and presents their best self. It's not that I'm competing with someone else. I get up, dress up and show up. Now that I'm not auditioning, I get up, dress up and I create a little video (for friends who may have a birthday). I look forward to it. What's the story I want to tell? I keep it short. I want to connect with them."

As a result of the changes in the industry, Templin said actors are becoming filmmakers.

"We have to know how to videotape auditions," she said. "That's how we're going to get work. Casting directors have done 'how-to' videos. It's not going away. Voice teachers at the Manhatten School of Music are teaching lessons on Skype. Columbia closed. All classes are online."

Templin remembered when the American Academy of Dramatic Arts started offering classes online in 2008. She thought it was strange.

Among the projects Templin was working on before the pandemic was a web series called "Pillow Talk," a take on the Rock Hudson and Doris Day movie of the same name.

"I should have known better than to do a web series that featured a dog, but I couldn't help myself, he's very cute," she said.

The project is being done in collaboration with her friend, Ron Schwinn, a veteran of 13 Broadway shows. He didn't let 9/11 change his schedule, but the virus has made him opt to stay home rather than make the twice-a-week journey on public transportation to work with Templin.

Schwinn, who loves sailing, offered some advice that she shared: "We are caught in the middle of a storm at sea. Keep your wits about you, shorten the sails, put up the storm jib and ride it out."

Another project she completed was a seminar on Facebook Live showing people how to set up an in-home studio.

"I could do this because I was a 4-H'er," she said. "I learned about three-point lighting in the photography project."

The Plato native is grateful for Facebook and the internet.

"It keeps me in contact with friends," she said. "I know that this is a temporary thing, but obtaining work in the entertainment profession may never be the same. We are definitely moving to a time of self-tapes instead of going to a casting director's office."

Home for Templin is a 20-unit apartment building on the Upper West Side, which is where many creative people live including artists, opera singers, actors, musicians and writers.

"Of those 20 units, 10 people have chosen to be in alternative spaces that they own," she said. "Some have gone ... to Sullivan County. Some have homes in Long Island. Some live in Connecticut and use their apartment as a “pied-à-terre," (which means for occasional use).

Templin keeps herself busy by maintaining a schedule every day. Among her activities are journaling, talking to family and friends and completing her physical therapy exercises. She also looks forward to listening to the governor's press conferences.

"Listening to my leader, Gov. Cuomo, makes me feel so much better," she said. "He's a wonderful speaker. He said, 'We're socially distant but spiritually connected.' You can see him forming his thoughts while he's looking at the camera. He's answering every question and making me feel calm."

For now, Templin will continue to hunker down.

"It's a beautiful city," she said. "The events of 9/11 did not shut down Broadway. This virus has. That being said, we will rise. We are prepared."