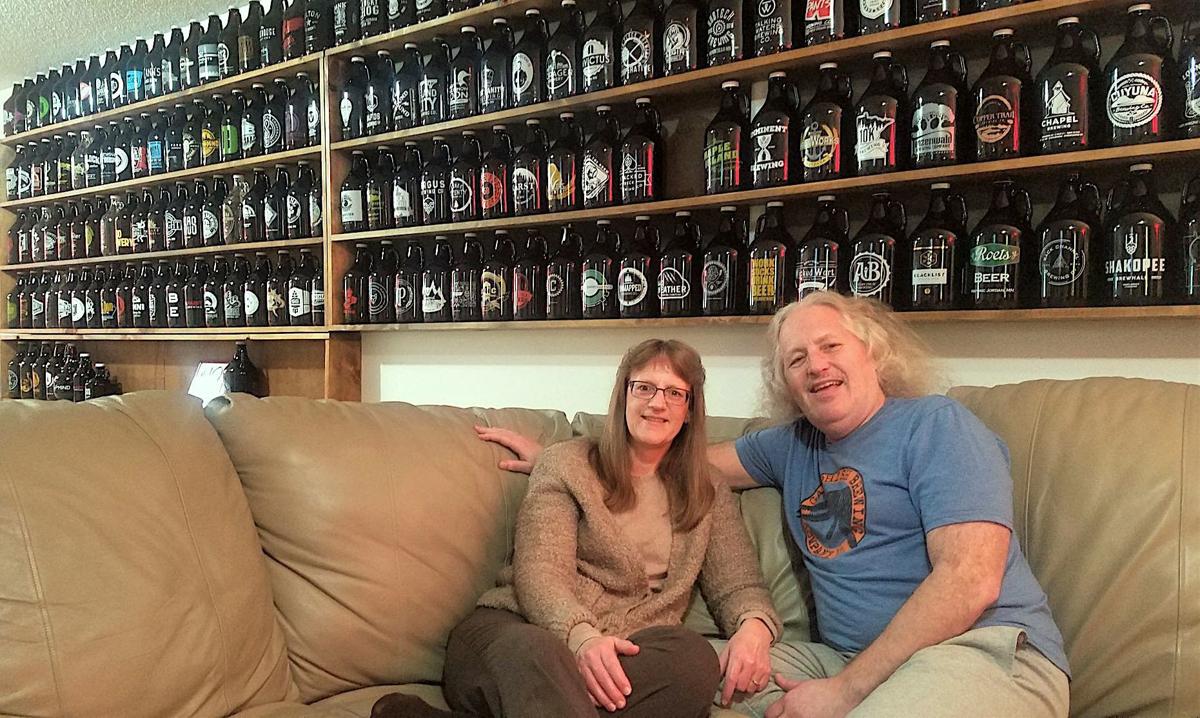 Teri and Jay Martin of Hutchinson completed a yearlong tour of 191 breweries across Minnesota in 2019, and they brought home a few souvenirs from their travels. They filled a display with 175 growlers from the places they visited, showing the variety of offerings in the state. 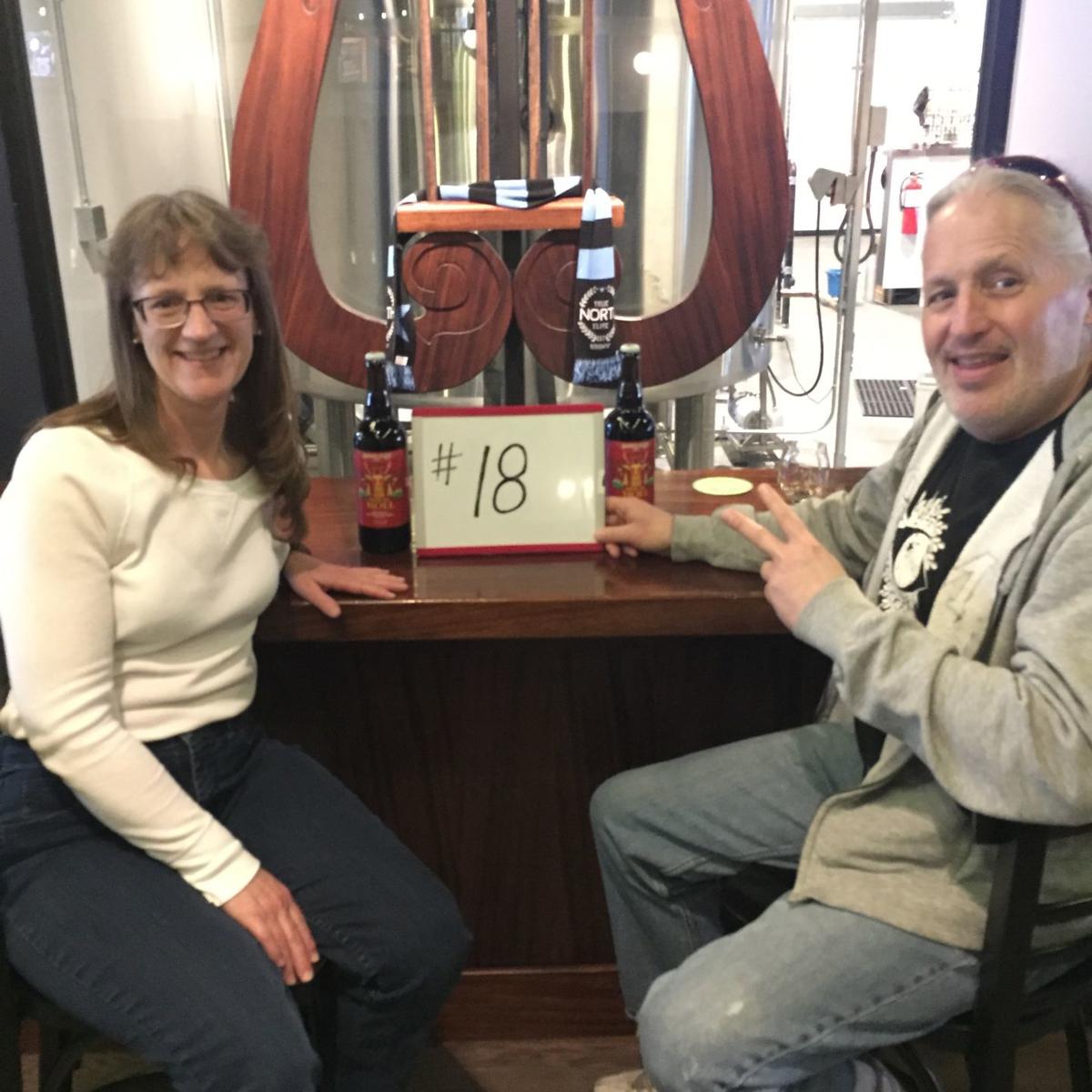 Finnegans Brew Co. was No. 18 on the list. Jay and Teri recall it had good beers and a nice patio. 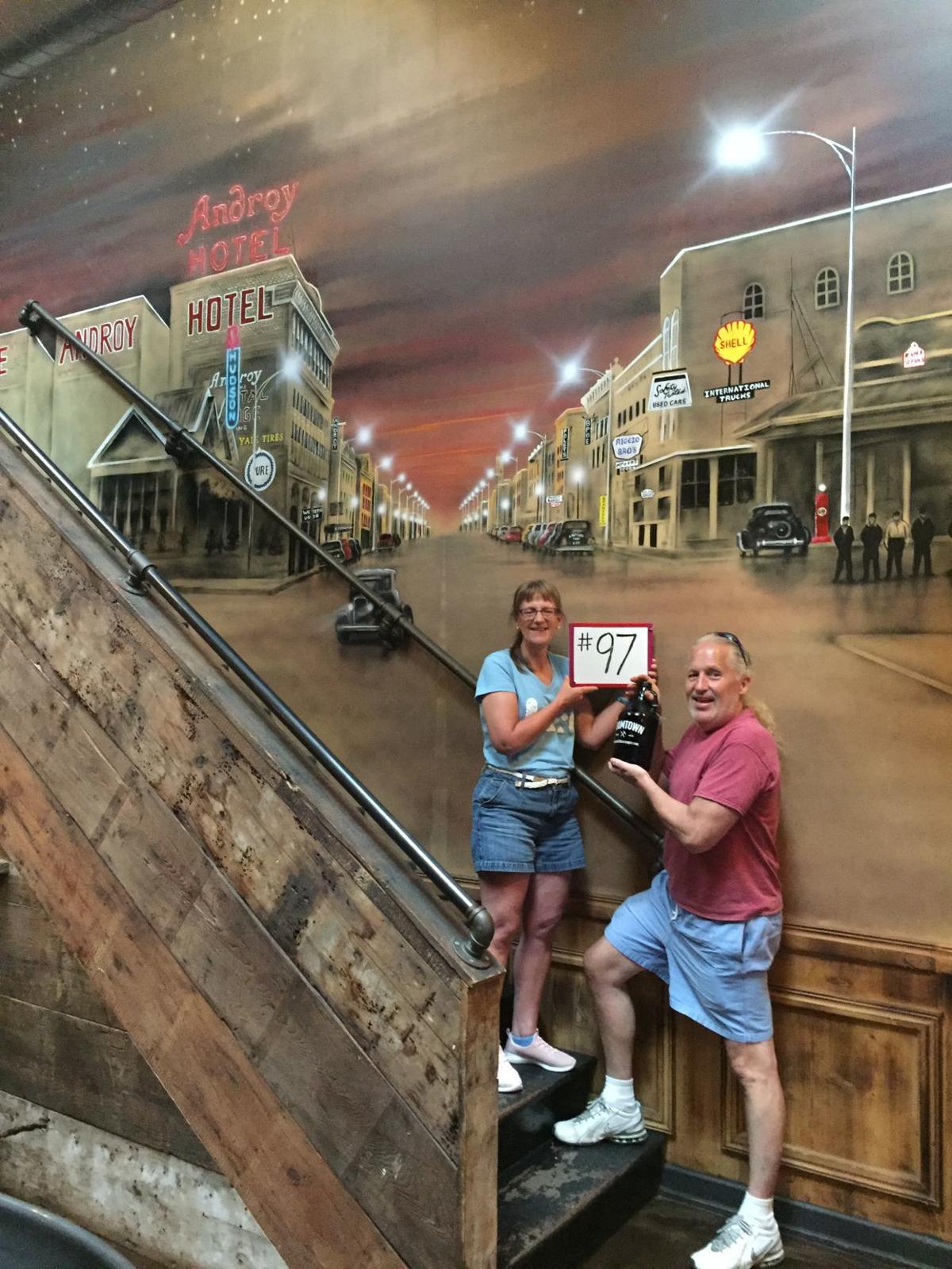 At BoomTown Brewery in Hibbing, Jay and Teri were impressed by the finest mural they had ever seen. They also rode bike to Hull Rust Mine. 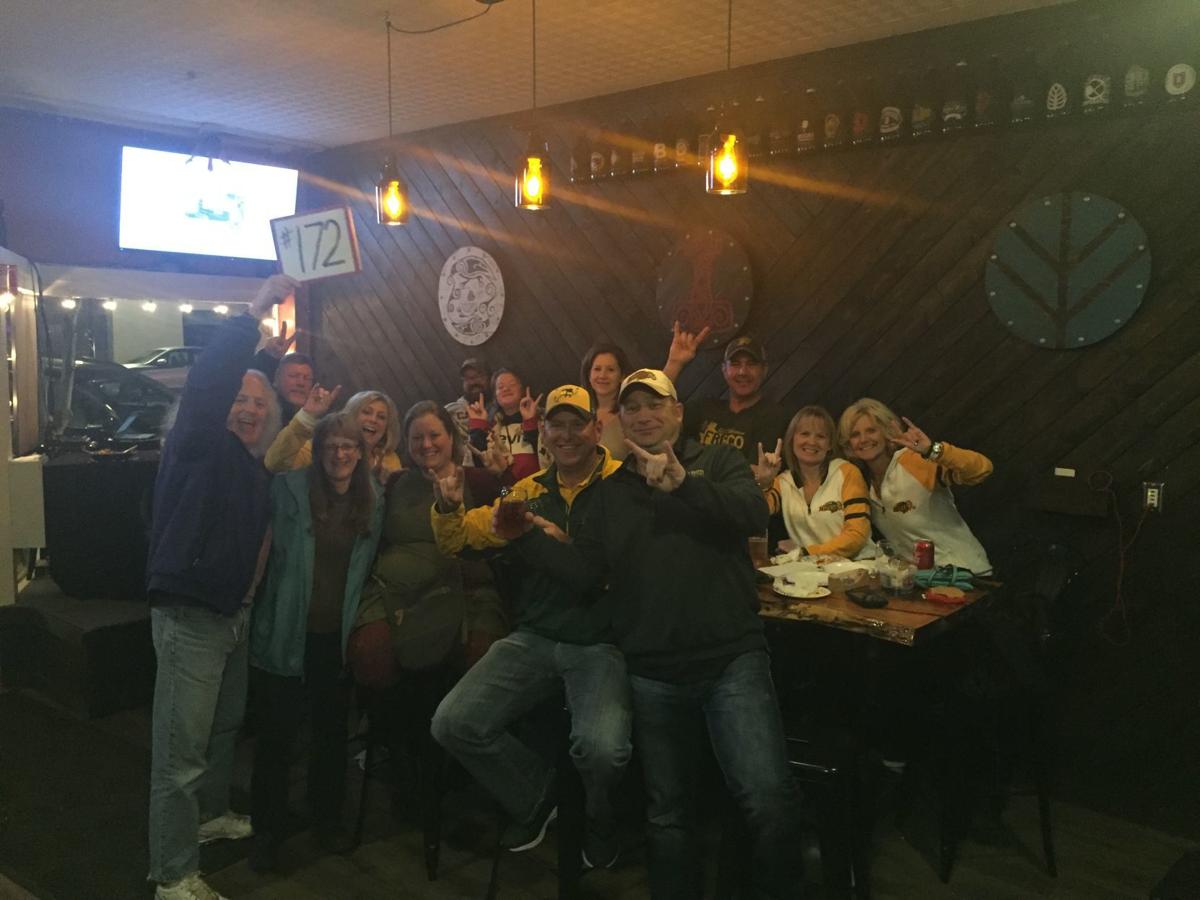 Jay and Teri were welcomed warmly at Aegir Brewing Co. in Elk River and were treated to free beer and pizza as they shared stories of their travels. 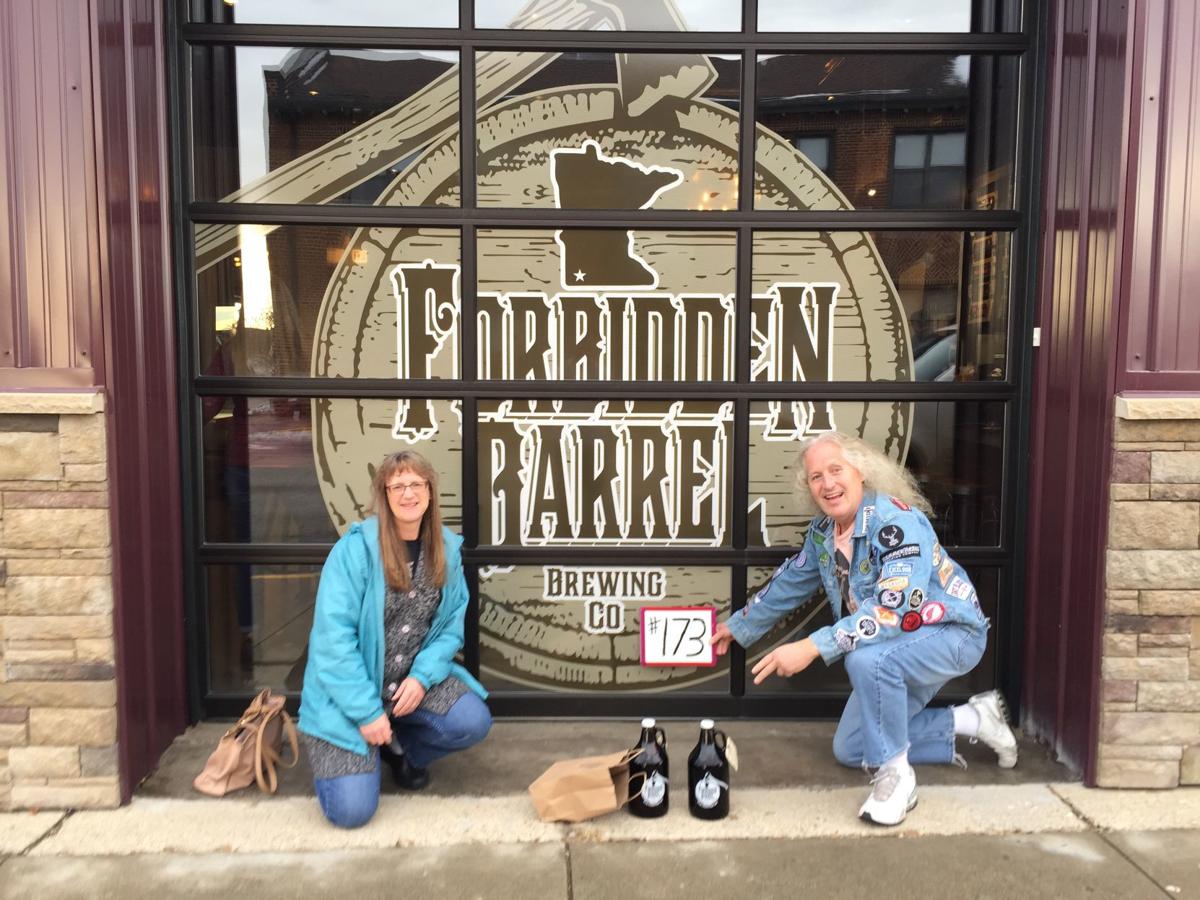 Cover photo: Forbidden Barrel in Worthington offered a small but tasty menu, a historic building in a historic town, and a diverse crowd that stood out to Jay and Teri. 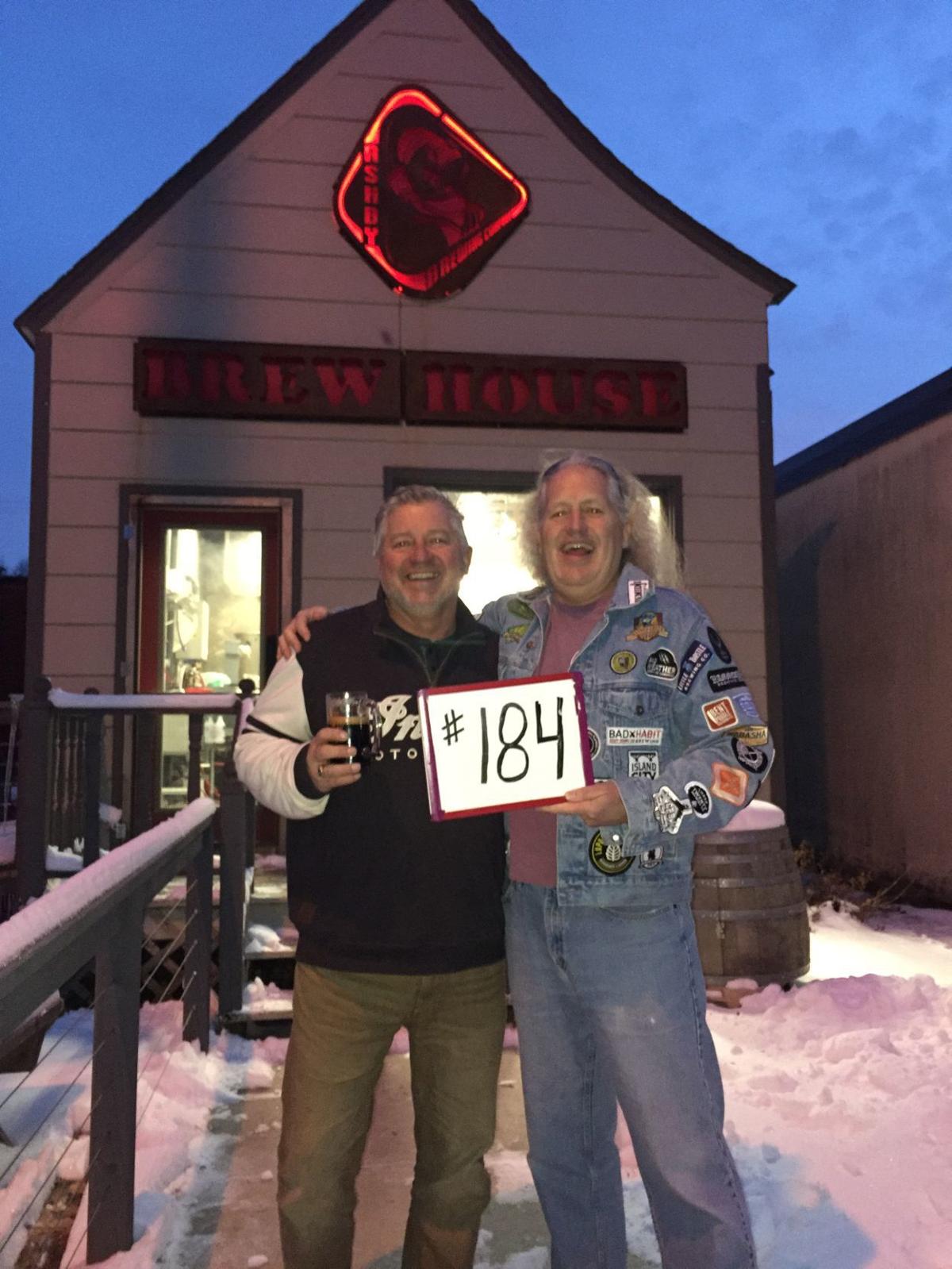 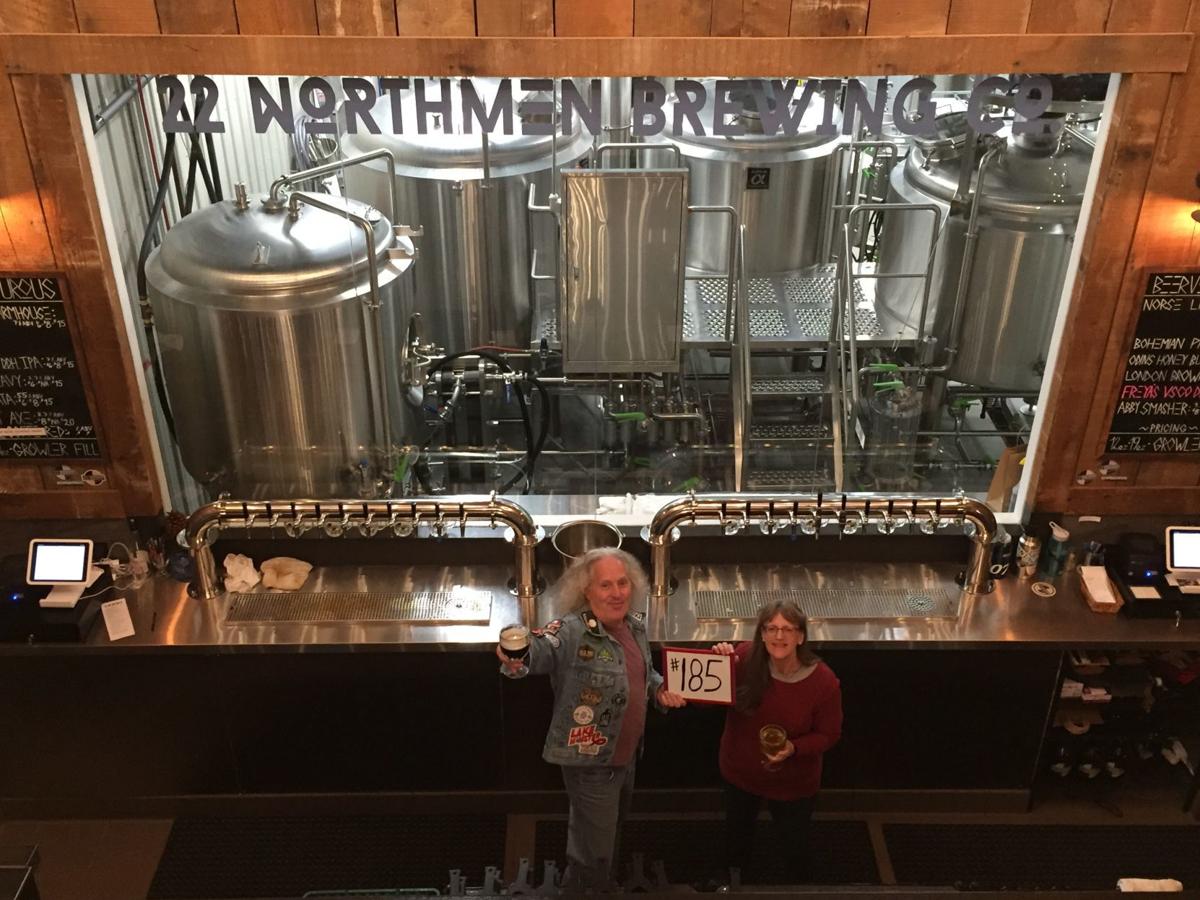 The viking-themed 22 Northmen Brewing Co. was stop No. 185 of 191 on the list. Jay and Teri loved the Belgium beers.

Teri and Jay Martin of Hutchinson completed a yearlong tour of 191 breweries across Minnesota in 2019, and they brought home a few souvenirs from their travels. They filled a display with 175 growlers from the places they visited, showing the variety of offerings in the state.

At BoomTown Brewery in Hibbing, Jay and Teri were impressed by the finest mural they had ever seen. They also rode bike to Hull Rust Mine.

Cover photo: Forbidden Barrel in Worthington offered a small but tasty menu, a historic building in a historic town, and a diverse crowd that stood out to Jay and Teri.

If you ever want to know where to grab a beer anywhere in Minnesota, just ask Jay and Teri Martin of Hutchinson. They know a few places.

The husband and wife duo spent 2019 on the road, traveling from one end of the state to the other on their mission to visit every local craft brewery serving beer to the public. They knocked corporate chains off the list, as well as private breweries and breweries not yet serving, and came to a compilation of 191 locations. That meant Jay and Teri had to hit three or four breweries every single weekend of the year, or double up to catch up. However, the stakes weren't so high when the year started.

"We were looking for something to do on a Saturday afternoon and decided to go to a brewery we hadn't been to yet," Teri said.

The couple have long been beer enthusiasts. Jay started collecting beer cans by dumpster diving with friends sometime about 1972 when he was 12. Teri had her own collection of 7- and 8-ounce beer cans on display. They discovered their mutual appreciation when they were dating and now have a basement full of beer memorabilia, including posters, growlers and cans.

While enjoying a few beers in late 2018, they came up with the idea to visit the rest of the state's breweries in the coming year. It seemed at least worth the attempt.

"We kind of laughed and said we probably wouldn't get to all the breweries," Jay said. "But we decided, how bad could failure be?"

The first brewery Jay and Teri checked off their list was on Jan. 12, 2019: Talking Waters in Montevideo. On the same day they also visited Goat Ridge in New London and Foxhole in Willmar.

"We really got into it," Jay said. "It really consumed our lives this year."

They purchased a small dry-erase board to stay organized. At each brewery visit they wrote down the stop number and had their picture taken with it. Weekend after weekend, the miles, photos and beers added up as the dry-erase board's number grew.

Weekend travel along the state's west side led Jay and Teri to Hallock, which is 16 miles south of Canada. Then they went on to International Falls, then Grand Marais and back down the Mississippi River to visit Stillwater, Red Wing, Harmony, and on and on it went. A photo album of their journey can be found at tinyurl.com/tq7tppy.

"It wasn't so much about just doing drinking," Jay said. "We wanted to learn something. Everywhere we went we heard people's stories about how they had traveled the world or the country and came back home to live."

MAKING FRIENDS ALONG THE WAY

In Ashby they met Greg Smedsrud, who owned and brewed at Ashby Brewing Company. After working at Apple he had returned home and started a business and agriculture internship program.

"We found a lot of people have love for their hometown," Jay said. "A lot of these breweries are started by people who have traveled and come back."

Along the way they met a couple from Royalton that farmed potatoes.

"They hung around with us a couple of weekends. It was fun," Jay said. "We made a lot of friends."

They also hiked to the top of Eagle Mountain, the highest natural point in Minnesota, and climbed Carlton Peak. They frequently took the opportunity to use bike trails. While in the southwest corner of the state they visited Pipestone National Monument.

At Lake of the Woods Brewing in Warroad, the owner chatted with Jay and Teri about their travels and shared samples of brews not yet available. A couple who were on the City Council talked about how locals were leaving and shared their love of home. Jay and Teri heard a pitch to move to Warroad.

"It wasn't so much about just doing drinking. We wanted to learn something. Everywhere we went we heard people's stories about how they had traveled the world or the country and came back home to live."

At Starry Eyed Brewing in Little Falls they met a musician who was playing that evening. He was originally from Jordan but traveled all his life. He returned to Minnesota after previously making a living as a busker.

At Loony's Brew in Ranier, a man who had traveled the world as a stage manager said he had retired to live in his hometown with his wife. He told Jay and Teri the town was dying, but he loved the town and encouraged them to move there.

At Island Brewing in Winona, a group of biologists who work for the Department of Natural Resources discussed their research along the Mississippi River. They shared stories about how they were trying to make a difference doing what they love.

One detail that stuck out no matter where they went was the support breweries received from their local customers.

"It was the same thing wherever we went," Teri said. "People loved their hometown brewery."

"One that I thought was really interesting was Forgotten Star Brewing in Fridley," Jay said.

In addition to a collection of notes recorded about each stop, Jay wrote a creative essay about their journey. In it he describes Forgotten Star.

"This place is just fantastic," he wrote. "Being a history buff, I was in awe of this building and brewery. Originally, this building was Northern Pump Co., which made water pumps for firefighting from 1929 to 1941. At this time the U.S. entered World War II. Operations shifted to manufacturing gun turrets for the navy."

He also wrote about Take 16 in Luverne.

"This place and town are special to me. In a way, it's sort of my second hometown," he wrote. "I received a heart transplant May of 2012 and my donor is from here. ... Seven-plus years ago, waiting on my new heart, we never thought this would have been possible. So, I want to say 'thank you' to Amanda, my donor."

It's not hard to guess what question Jay and Teri heard the most on their journey to visit every local Minnesota brewery.

They took a stab at providing an answer, or at least a list of their favorites, and narrowed it down to 42. The list isn't based on a strict critique of beers, but on lasting impressions from the beer, location, history, ambiance and people.

Here are 10 of those 42 selected mostly at random, with a brief summary of what Jay and Teri had to say:

Schell's of New Ulm: The brewery is a step back in time and full of history.

Boomtown in Hibbing: The Iron Range brewery impressed with its mural and amazing view.

Schram Haus of Chaska: The view of the Minnesota River Valley and nearby bike trail help make the brewery a little gem.

Castle Danger of Two Harbors: Taking in the history of the town and lake is worth the trip alone, along with the view of the lake and iron ore docks.

Ursa Minor of Duluth: A little gem with a small, cozy space and a wood-fired pizza oven. A cool place to relax.

Roundhouse of Brainerd: The brewery is in an old train depot and offers a historic view with several buildings. There are also nearby bike trails.

Wabasha of St. Paul: A quintessential friendly neighborhood bar where everyone knows your name. Jay and Teri were reminded of "Cheers."

Steel Toe of St. Louis Park: The beers were some of the best in the state. The brewery was cozy and there are nearby trails.

Brau Brothers of Marshall: The old Lucan fire truck is the barback piece with taps that dispense beer. The food and beer were great.

In June or July, Jay and Teri started to doubt themselves. Planning the trips, traveling, keeping the house in order and missing out on gatherings had taken a toll. So they met with Liz Foster, who had visited 120 breweries in 2018 and was employed as the "chaos coordinator" at Urban Growler Brewing. They shared stories about their travels over a few beers.

"Without knowing it, Liz inspired us to continue our journey," Jay said.

On Dec. 28, they visited Bobbing Bobber Brewing Co., the last stop on their list.

"We purposely left our hometown brewery as our last stop of the year," Jay wrote. "We never went once during this tour until the end. We wanted to see if we had as much love for our place/home as those we met had for theirs. We have lived in Hutchinson almost all our lives, and even with all the zits, warts and boils, it is our home/place. So, yes, we love our place and our hometown brewery."