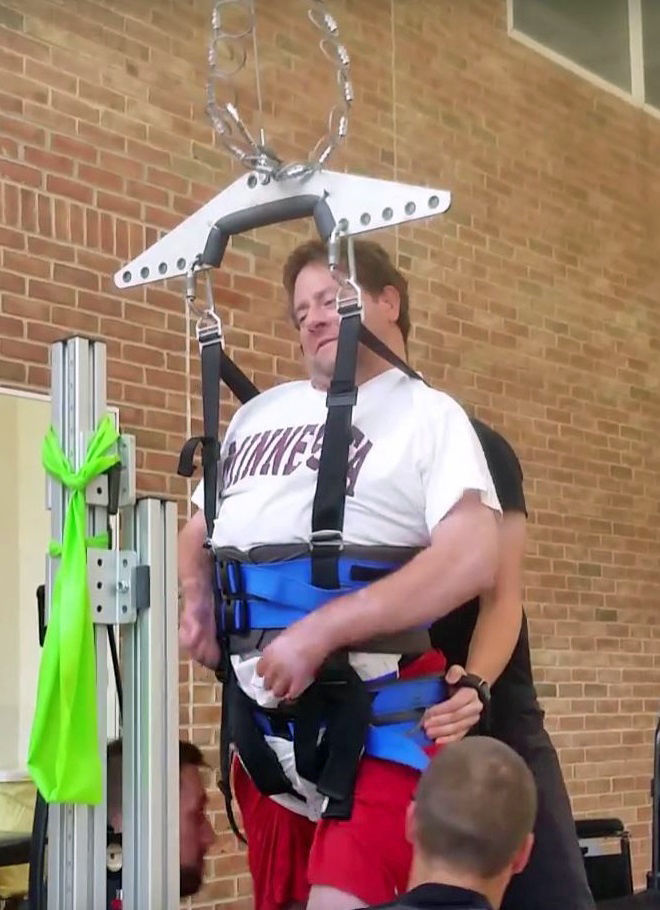 Colby Smith was able to take his first steps after 18 years thanks to the help of professionals and equipment at the Courage Kenny Rehabilitation Institute in Golden Valley. 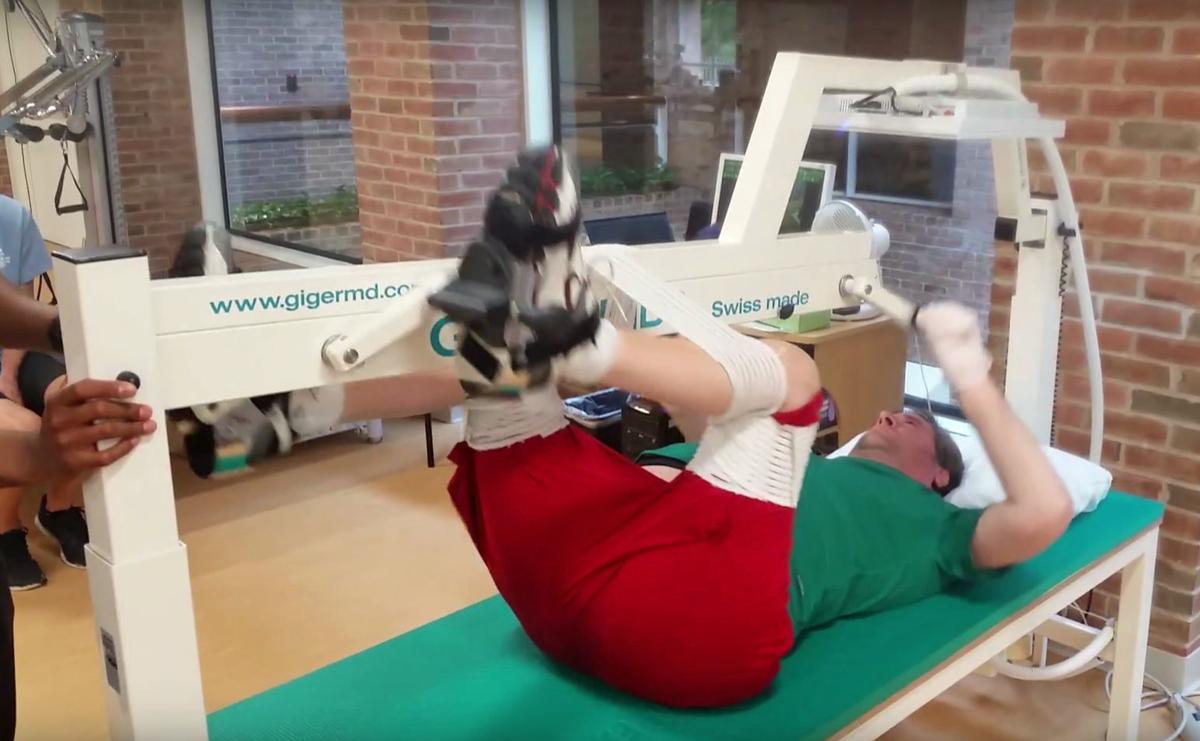 Exercises in the ABLE program are designed to help Colby Smith, and others, get moving again, and build up strength lost due to paralysis.

Colby Smith was able to take his first steps after 18 years thanks to the help of professionals and equipment at the Courage Kenny Rehabilitation Institute in Golden Valley.

Exercises in the ABLE program are designed to help Colby Smith, and others, get moving again, and build up strength lost due to paralysis.

Eighteen years after he was paralyzed in a car crash north of Hutchinson at age 17, Colby Smith was recently reminded how it feels to be on his feet — with assistance.

“I cannot ever remember feeling so wobbly and uncoordinated while I was walking (before),” he said. “I guess it felt like more of a bouncy walk.”

The experience was made available for the Hutchinson native as part of an intensive workout program at the Courage Kenny Rehabilitation Institute in Golden Valley, a part of Allina Health. The program known as ABLE (activity-based locomotor exercise) offers a way for people with neurological conditions or paralysis to move with professional assistance, build up strength, and improve their health.

For Smith, exercises have included steps on a treadmill with physical support and help from therapists, free standing with support, and laying on a mat while therapists help move his legs in a pedaling motion.

During the assessment, “I was told they were going to stand me up by the mat, and that caused me to raise my brows … I’m not quite sure how they pulled it off,” he said. “While doing the treadmill, I couldn’t help but joke. I said I was OK in a high voice to indicate how snug the harness was on the inner thighs.”

But the program isn’t just about the feeling of a standing position. It’s about health.

“People with these disabilities are unable to get up and move around like we do. The lack of mobility impacts their overall health and wellness so much,” said Carrie Shogren, occupational therapist. “There is a misconception. People think those with these disabilities just can’t walk, but it effects every system in their body. All of our systems work better when upright and moving and exercising.”

Colby said that if he had the opportunity to attend the ABLE program shortly after the crash, his primarily goal would likely have been to walk again one day.

“Now being 18 years (paralyzed), my primary goal is simply to improve my physical health as a means to attain my vocational goals,” he said.

“He said he has already gained more awareness and core strength,” Shogren said. “It is profound with him because it has been years since his injury, and he is excited to notice these changes.”

It was back in 2010 that Colby first learned of the ABLE program while attending a fitness center with wheelchair accessible equipment. But the time commitment came at the wrong time — he had decided to take on grad school and pursue a degree in rehabilitative counseling. He wanted to coach people who acquired health challenges, and draw on his own years of experience.

The mix of goals created a conflict. On one hand, Smith wanted to pursue his vocational goals to decrease his reliance on social programs. But he also knew he needed to keep an eye on his short- and long-term health.

So he stayed on the waiting list in case the timing worked out better in the future. Over the next few years, the options never quite lined up, and at one point his name fell off the waiting list when the Courage Center changed owners.

Eventually it all came together. Smith had earned his degree and certification, and there was another opening. He knew he couldn’t pass up another chance.

“I needed to increase my investment in maximizing my physical health in respects to improving my energy levels and stamina while sitting in the chair for 10-12 hours,” Smith said. “(And find a way) to minimize my chronic discomfort I experience in my lower back.”

Smith’s assessment was on July 13 — that’s when he first experienced the treadmill, and had help standing. Since then, he’s had four two-and-a-half-hour sessions. The professionals at the Courage Center help him with guided exercises, and other activities.

Of note is functional electrical stimulation cycling. Basically, electrodes are placed on his muscles while his arms or legs are moved in a cycling pattern. Activities that place Smith upright come with the aid of multiple therapists. Some of the angles they hold him up by can be a little surprising.

“The combination of playing hockey and football before my injury gives me the mindset that I can take a rough hit every now and again,” Smith joked. “And I know these fitness professionals have gone to expensive training on safely transferring people with spinal cord injuries.”

For the most part, the exercises are all about building core strength, physical health, strength and stamina. Those building blocks are important before more regular time on the treadmill, for example.

As Smith progresses, and he tackles advanced exercises more regularly, the cost of the program will increase, and he isn’t certain finances will work out long term. His gofundme page can be found at http://tinyurl.com/yafqaehj.

“After four sessions at the ABLE program I already notice a significant difference in my overall back comfort and well as sitting stability,” Smith said.