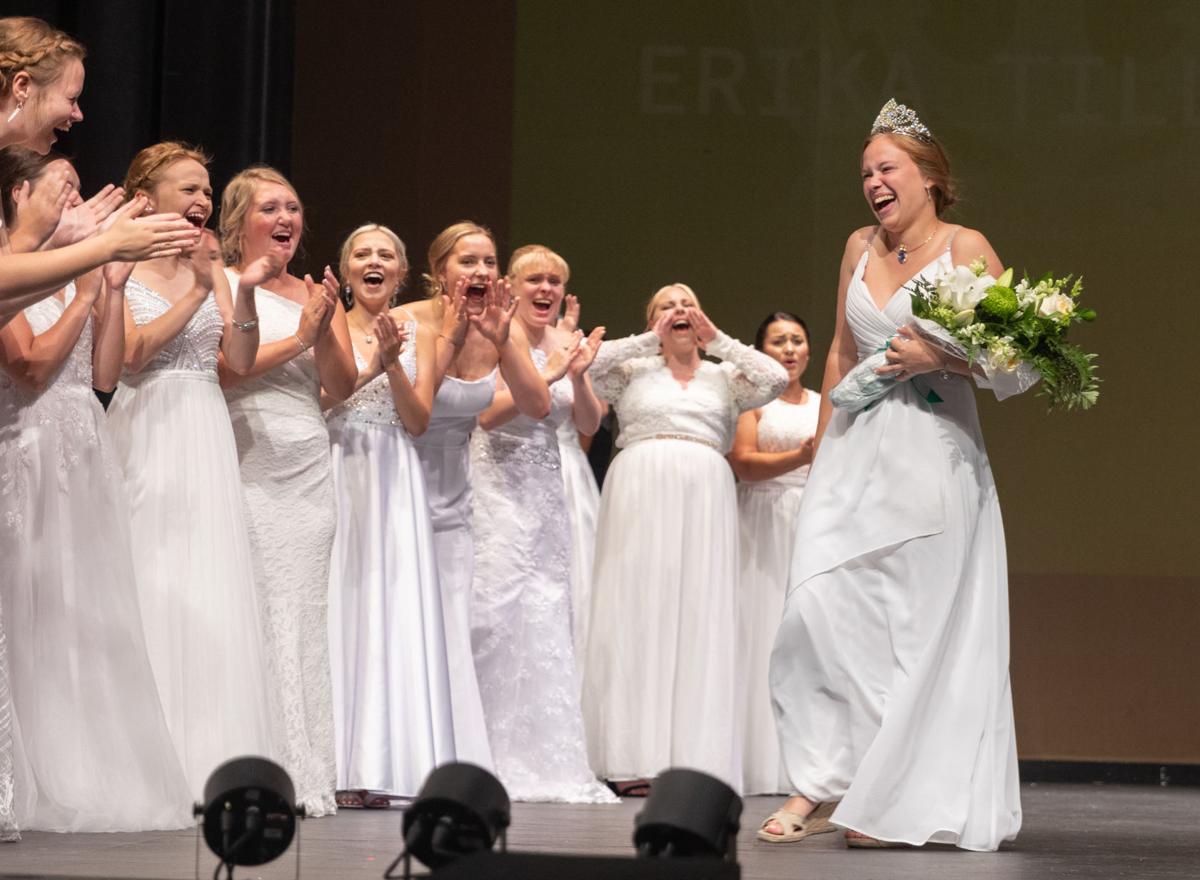 Erika Tillmann, 2019 Miss Hutchinson, was crowned Queen of the Lakes this past weekend during Minneapolis Aquatennial. She is just the second woman from Hutchinson to earn this crown. 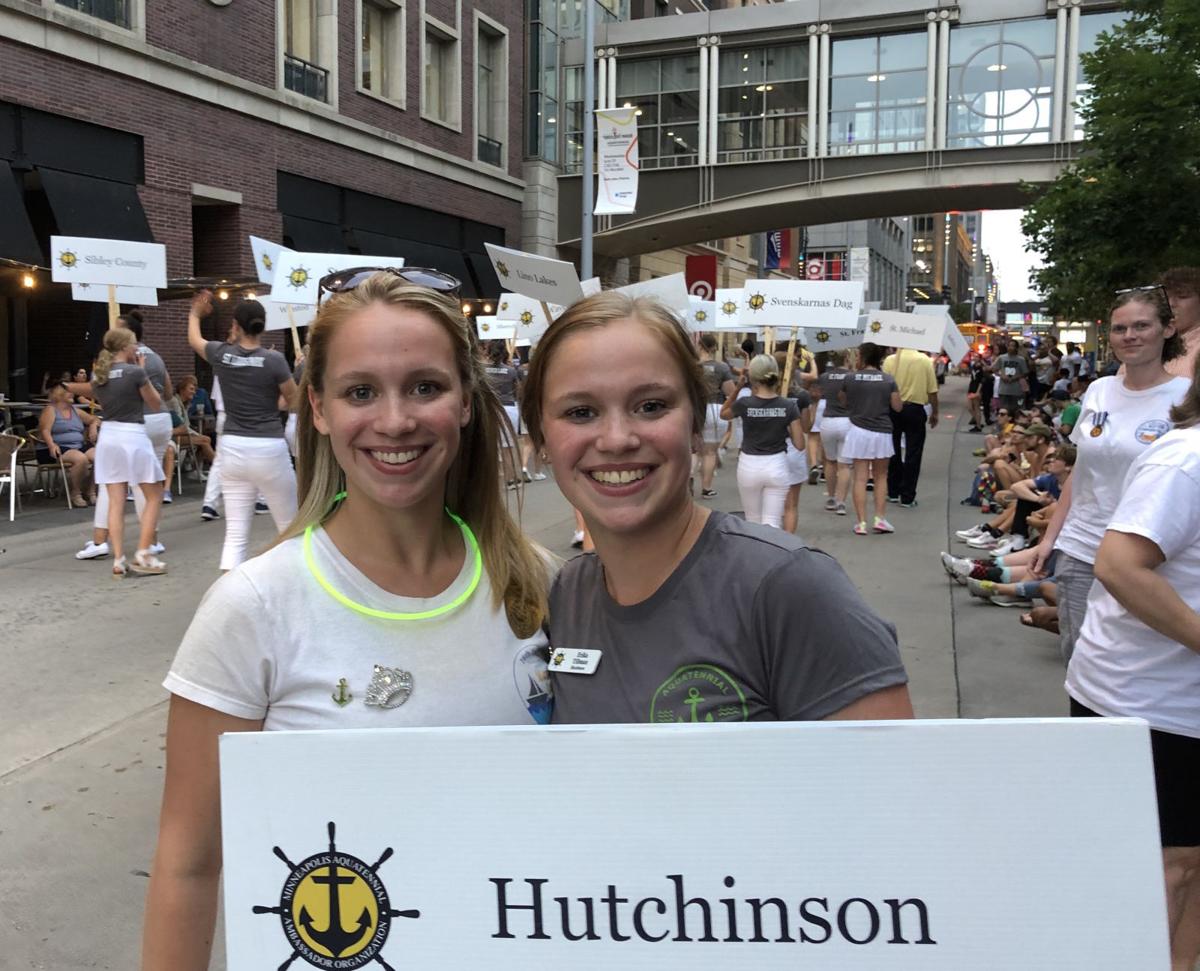 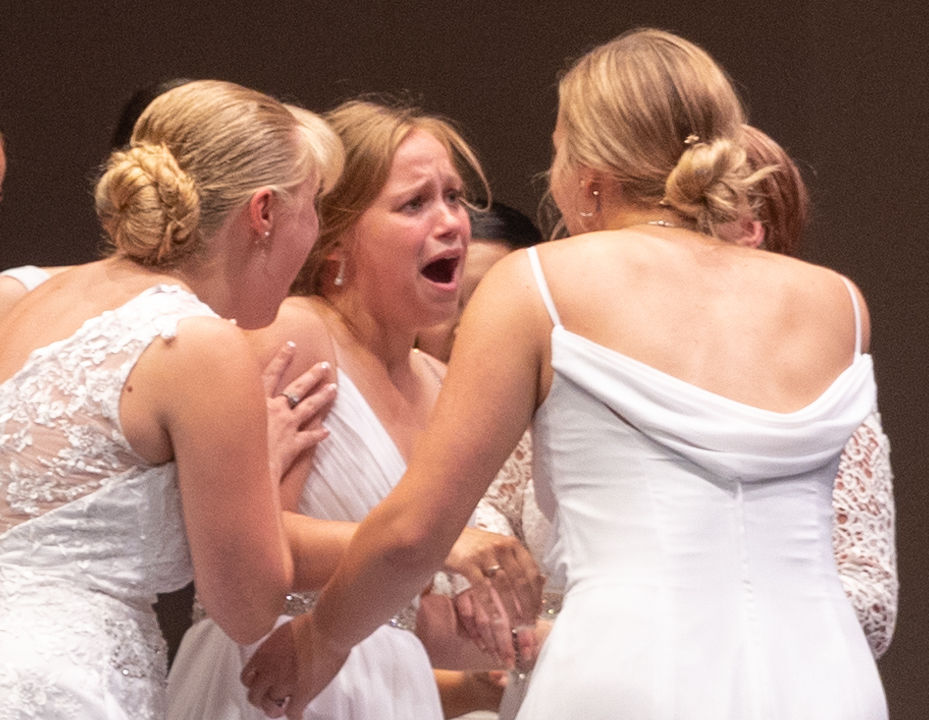 The look of surprise on Erika Tillmann’s face says it all as other Aquatennial contestants surround and congratulate her.

Erika Tillmann, 2019 Miss Hutchinson, was crowned Queen of the Lakes this past weekend during Minneapolis Aquatennial. She is just the second woman from Hutchinson to earn this crown.

The look of surprise on Erika Tillmann’s face says it all as other Aquatennial contestants surround and congratulate her.

When 2019 Miss Hutchinson Erika Tillmann passed on her crown this past June, it turned out her time as royalty was not yet finished. The 22-year-old was crowned the 2022 Queen of the Lakes during the Aquatennial Ambassador Coronation Saturday at the Hopkins Center for the Arts in downtown Hopkins.

“Truly I was not expecting to be selected,” she said. “There were 42 other amazing women beautifully representing their communities. I was extremely shocked and obviously so excited and proud to continue to represent Hutchinson.”

Tillmann's crowning made history, too. For the first time, back-to-back Ambassadors were chosen from the same community. Tillmann follows in the footsteps of Princess Erin Westlund of Hutchinson, who was crowned in 2019.

"I felt quite a bit of pressure knowing Erin had received the crown, for me to follow her in this legacy," Tillmann said. "The Aquatennial has never had two in a row. It's fun to be making history with Erin."

The coronation was also a blast to the past for Hutchinson. Emceeing the festivities was Natalie Neubauer, 2000 Miss Hutchinson and 2002 Queen of the Lakes.

Tillmann is the daughter of Brian and Jenny Tillmann of Hutchinson and a 2017 graduate of Hutchinson High School. She has two siblings — an older sister, Samantha, and twin sister Loraina, who was crowned Hutchinson Water Carnival Princess in 2017. Tillmann followed in her footsteps and was crowned Miss Hutchinson 2019-21, a two-year term rather than the traditional one year due to the COVID-19 pandemic, which caused the cancellation of 2020 summer festivities.

"The moment I was going to run for Aquatennial, they (my family) accepted the position as if I was selected," she said. "They told me from the beginning that I was completely capable of becoming Queen of the Lakes. It was so nice to have the support from day one when I didn't believe in myself. When I was crowned, they went wild."

Tillmann said she started her new job as Queen of the Lakes following Saturday's coronation. Among the perks of her new position is a working wardrobe.

"As soon as we were crowned, we tried on all these clothes — what worked, what fit," she said. "I felt like a celebrity. We took the clothes home with us and will bring them to events to wear."

The Aquatennial team of six — which includes Tillmann and Princesses Ariana Velishka of Jordan and Hannah Rodgers of Red Wing, Captains Judy Holmquist and Paulette Christopher, and Commodore Brent LaSalle — will make 250 to 300 appearances during the coming year in Minnesota and across the country. Their first appearance is July 31 at Rails to Trails in Watertown.

"I'm looking forward to all of them," Tillmann said. "This is going to be so fun. One thing super special is we get to go to the Rose Bowl in California — an absolutely breathtaking experience. I'm very excited to be representing Hutchinson and Minneapolis halfway across the United States."

Tillmann passed her Miss Hutchinson crown to Madalyn Prokosch June 20. Although she didn't have any official duties until Aquatennial Candidate Week July 19-24, she juggled two summer classes working toward a master's degree in school counseling at the University of Wisconsin-Stout, and she just finished a stint as the university housing coordinator where she managed COVID-19 policies and procedures.

EVERYONE IS A WINNER

While there can only be one Queen of the Lakes and two princesses, all 43 young women who competed in the Ambassador Coronation program are winners as former representatives of their home community or festival.

Going into Aquatennial Candidates Week, Tillmann said she thought a lot about it and came to the conclusion that her goal was to make herself proud.

“That way I would be happy with the week no matter what,” she said. “I wanted to make new friends and new connections with other candidates ... during the week, (that way) I was happy no matter what the outcome."

Among the skills that helped Tillmann was a Bachelor of Science degree in psychology, which provided her with experience in reading people, gauging when to speak up and when not to, and how to use her conversation skills.

While she had been interviewed for Miss Hutchinson, Tillmann described the Aquatennial group and individual interviews as "being on steroids."

"They ask questions different every year," she said. "It was hard to prepare in advance for them. I was absolutely challenged by the interviews."

One of the most difficult, Tillmann said, was a situational question. She had two minutes to read a prompt and then go into a room and act out that prompt. As an ambassador she would attend a city council meeting. How do you feel about the events happening in Minneapolis and St. Paul?

"You could take it anyway you wanted," she said. "It was hard to focus on one thing. I said, 'Our job is to learn and grow from uncomfortable situations — really going out of my way to understand and put my own biases aside to be more knowledgeable and empathetic.'"

“It was a lot of fun, fun to learn about their communities,” she said.

They also visited the Woman's Club of Minneapolis, which she described as "outstanding, breathtaking how beautiful."

“We met women volunteers who are members," Tillmann said. "They were amazing inspiration, super fun to meet them all."

Friday brought an opportunity to help others through the Bags of Smiles program, which provides "smiles one bag at a time to local pediatric patients in Minnesota." The candidates tied blankets for younger individuals in cancer wards, clinics and hospitals. The evening brought a boat ride with the Minnetonka Powerboat Squadron.

“We had sandwiches on a private island,” Tillmann recalled. “We were treated like royalty. We had a tour of Lake Minnetonka — it's huge. That night we celebrated the outgoing commodore, outgoing ambassadors. Saturday was coronation all day long and fireworks at the end of the evening.”

"I never would have done it if Loraina hadn't run two years before me," she said. "I didn't understand it. Watching her, I found out it was so much more about community building and volunteerism. That's what got me interested. It was a super fun candidate week and I ended up getting selected."

Asked if she enjoyed serving as Miss Hutchinson, Tillmann called that an understatement.

"Seriously, it was such an honor to represent Hutchinson," she said. "I love Hutchinson. I humbly bragged, we have a beautiful and amazing community. I grew immensely from going to parades, coronations, all the fun events we got to do — reading at the library, visiting local senior facilities. I definitely grew in confidence and leadership from the experience."

During the next year, Tillmann will juggle classes at UW-Stout, working as a server at a Menominee restaurant, and her Aquatennial duties.

When asked what advice she would give to those thinking about becoming a queen candidate, "Do it," Tillmann said.

"Really, that is my advice," she said. "If you're even remotely considering it, go out of your comfort zone and do it. Even being a candidate is an honor in and of itself. Take a step and do it. You're treated like royalty during candidate week. Even that week, you have so many opportunities to grow. It's a great way to practice those interpersonal skills, meet some girls and have a good time."

Erika Tillmann joins seven other Hutchinson women who were named past Aquatennial royalty: