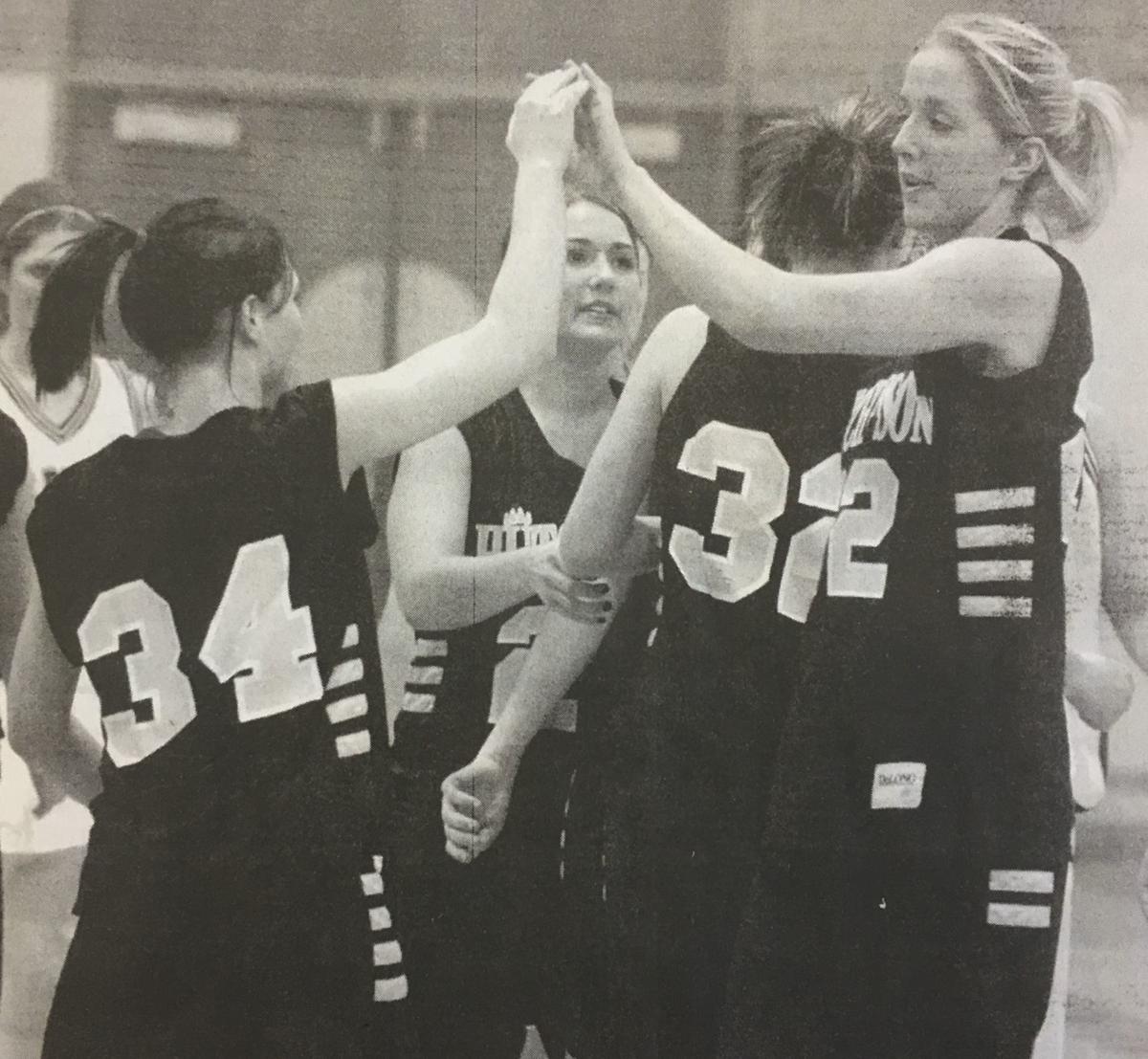 Former Hutchinson girls basketball player Meghan Rettke, right, celebrates with teammates after winning a game during the 2005 season. Rettke is Hutchinson’s all-time rebounds leader and the team’s only member of the 1,000-1,000 club, making her one of the best to ever wear a Tigers jersey. 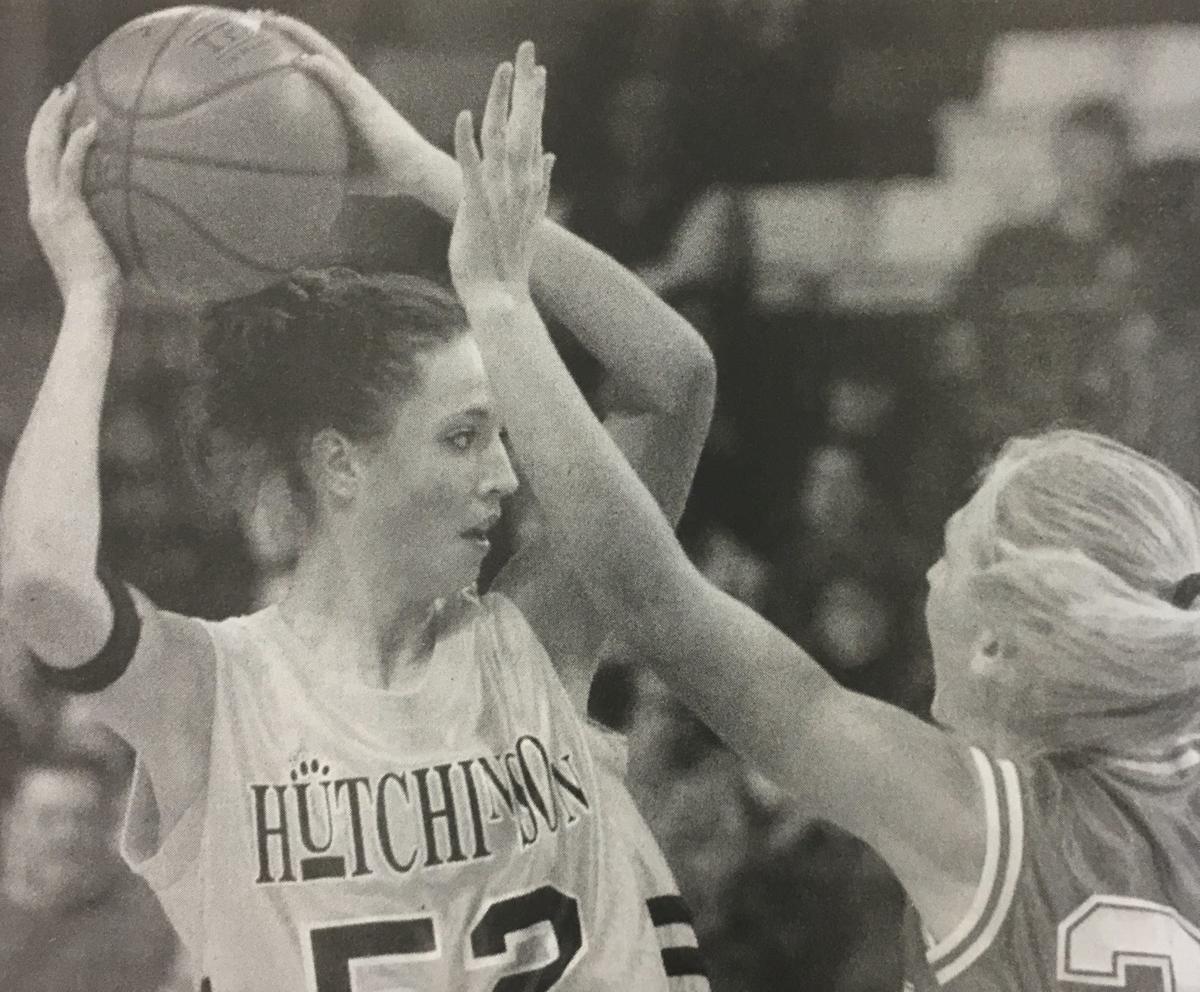 Hutchinson High School 2003 graduate Brianna Monahan, left, helped lead the Tigers to their first section title in more than a decade her senior year. Her name is also found often in in girls basketball school records.

Former Hutchinson girls basketball player Meghan Rettke, right, celebrates with teammates after winning a game during the 2005 season. Rettke is Hutchinson’s all-time rebounds leader and the team’s only member of the 1,000-1,000 club, making her one of the best to ever wear a Tigers jersey.

Hutchinson High School 2003 graduate Brianna Monahan, left, helped lead the Tigers to their first section title in more than a decade her senior year. Her name is also found often in in girls basketball school records.

When it comes to Hutchinson’s greatest girls basketball player ever, there’s no competition.

Two-time Olympic gold medalist and four-time WNBA champion Lindsay Whalen’s jersey hangs in the Hutchinson High School gymnasium named after her for good reason. During her four varsity seasons, from 1997 to 2000, Whalen racked up 1,996 career points, a school record that stands tall to this day.

But it wasn’t just her ability to score that made the current Gopher women’s basketball coach so great.

“She has all of those intangibles, those unmeasurables you can't teach them,” said Andy Rostberg, Whalen’s former high school coach. “Whether it be heart and courage, you can't measure that. Leadership qualities, she has all of those. Then you put in work ethic and the rest is history.”

While the future WNBA Hall of Famer is the first name that comes to mind when people think Hutchinson girls basketball, there were many great players who came before her, and many she has inspired to greatness in the two decades since she graduated from HHS. Here’s a look back at some of the best players to have stepped onto the hardwood in a Tigers jersey.

Chasing a Hall of Famer

When Whalen finished her high school career with 1,996 points, she was more than 700 points ahead of any other Tiger in school history. Second on the list at the time was her former teammate, Kelly Brinkman, who graduated in 1999 with 1,204 points. Before those two the leader was Joy Anderson, who graduated in 1989 with 1,113 points.

In the past 20 years, however, the Tigers have had a number of players chasing Whalen’s record, although all have fallen short by hundreds of points.

The team’s second greatest scorer ever is a 2017 graduate and current starter at St. Cloud State University, Tori Wortz. Like Whalen, Wortz was a four-year starter and finished with 1,544 points.

When current girls basketball head coach Tim Ellefson started his first season as the head coach, he could see Wortz’s potential as an eighth-grader. Although she showed flashes as a freshman, it wasn’t until her sophomore season that she established herself as a team leader.

“After like the first game, she had 12 points or something like that,” Ellefson said. “I told her, ‘For us to be the best that we can, I need you shooting 13, 14 shots a game.' She had probably shot five or six. She didn't feel real comfortable about that. She went out the next game and shot like 10-for-12. … Since then she took on that role and was looking for her offense more, and that led her to being a great scorer.”

A strong defense can also lead to scoring, and that was especially the case for Wortz, who sits second on the team in steals with 310. The only person with more is her former teammate, Kenzie Rensch, who graduated in 2018 with 321 steals. Rensch also ranks among the team’s top-10 scorers with 1,088 career points.

Defense was always a specialty for Rensch, who got her first taste of varsity as an eighth-grader in a late-season game.

“She jumped up and went in there,” Ellefson said. “She never touched the ball I don't think, but she went out and guarded their best player for about five straight possessions and got two steals and frustrated her into bad decisions in those five possessions. That was the start of it. She just craved it. And that's what's going to make her successful at Augustana these next few years as she looks to take a bigger role on their team.”

Those two along with former teammates such as Erin Corrigan, Morgan Kurth and others from that era combined for one of the best full-court presses in school history.

A few of stat-sheet stuffers

Another name you’ll find in the record books often is 2005 graduate Meghan Rettke. She holds the career rebounding record with 1,473 and is third in career scoring with 1,401 points, making her Hutchinson’s only player in the 1,000-1,000 club. She’s also Hutchinson’s top blocker in school history with 367 stuffs.

Brianna Monahan, who graduated in 2003, also ranks fourth with 1,313 career points and third with 917 rebounds.

“Knowing both of them,” Ellefson said, “they were tough-minded, worked hard and outworked you. Then put that along with their height and talents, that's when you get dominance.”

Rostberg also recalled Monahan’s ability to come up big in the clutch.

“When the game was at its height and it was the toughest situation that the team was facing, that's when (Monahan) rose up,” he said. “We had a lot of them that did that, but (Whalen and Monahan) really stand out. The situation at hand was never too big.”

And when it came to passing, you might think Whalen holds the school record in assists considering she ranks third all-time in the WNBA, but you would be wrong. That record belongs to Carrie Schwartz, who dished out 509 assists and graduated in 1998.

Schwartz, like Whalen, was a taller point guard who could see over the defense and handle the ball well, according to Rostberg, and could make any pass in the book: pocket pass, rolling pass, out to the corner, Schwartz could do it all.

“She was like having a coach on the court,” Ellefson said. “She knew what the play was, what to look for and what the defense would do. She could anticipate that kind of stuff.”

Other honorable mentions in the record book include 1998 graduate Katie Jensen, who ranks second with 934 rebounds; 2012 graduates Alissa Retterath and Nichole Wittman, who scored 1,238 and 1,111 points, respectively, to rank fifth and eighth in school history; and a pair of players from the late 1980s — Joy Anderson and Kris Hoeft — who scored 1,113 and 1,093 points, respectively, to round out Hutch's top-10 all-time scorers.

None of this success came without hard work, and that mindset has been passed down through the years to make Hutchinson girls hoops the program that it is today.

“It's the hard work and the willingness to do whatever it takes to help their team win,” Ellefson said. “That's the trademark of Hutch girls basketball.”