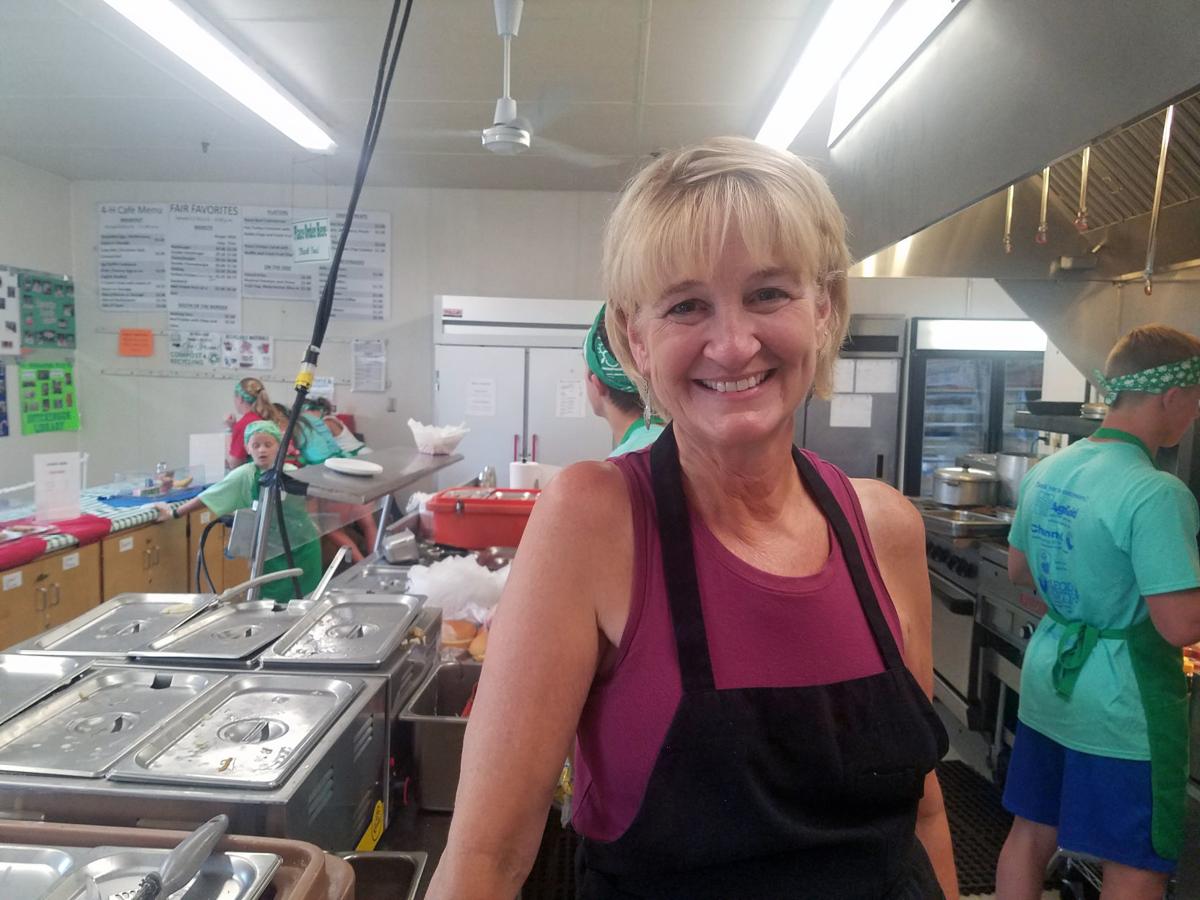 Dede Hard has spent 40 years serving lunches to 4-H’ers at the Minnesota State Fair, and the people she’s met she now considers to be family. For the past few years she’s been helping out as kitchen manager at the 4-H Cafe at the McLeod County Fair. 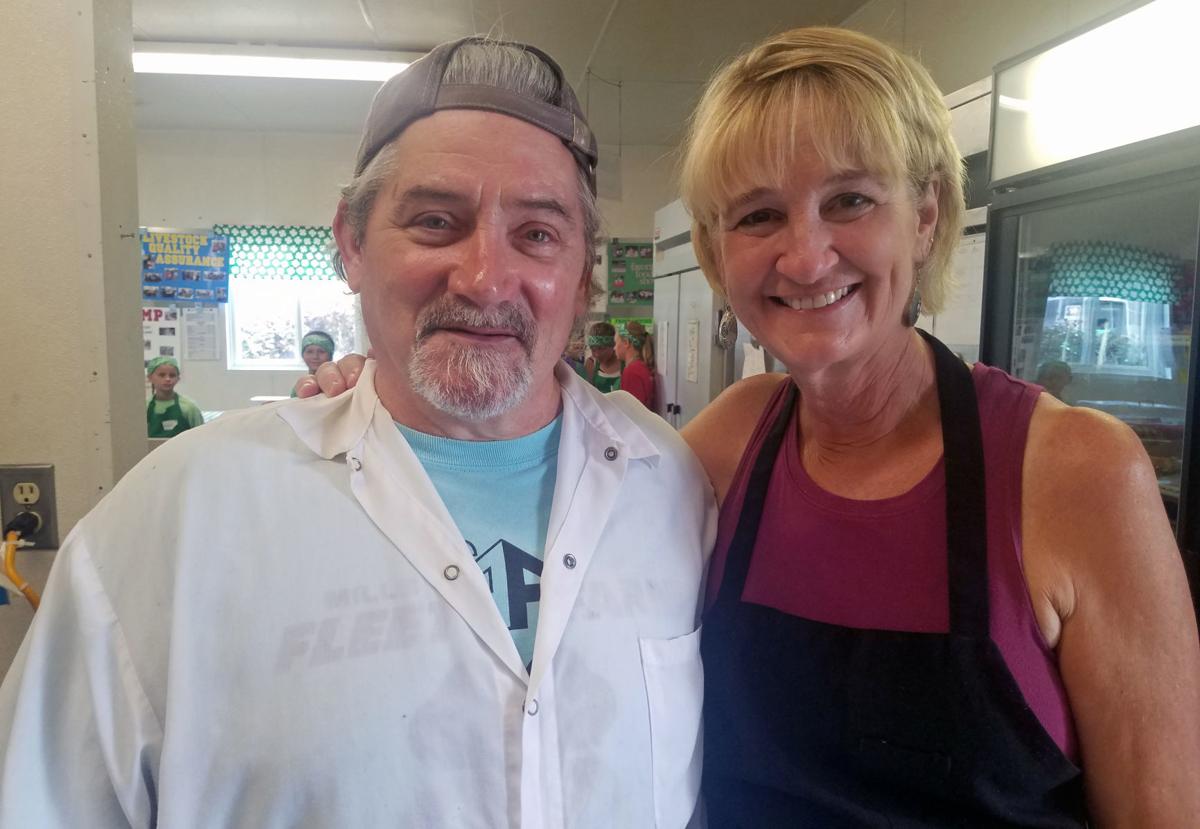 Terry Gallagher, who has helped Dede Hard serve 4-H lunches at the Minnesota State Fair for two decades, has joined her in serving food to the public at the Meeker County Fair and McLeod County Fair.

Dede Hard has spent 40 years serving lunches to 4-H’ers at the Minnesota State Fair, and the people she’s met she now considers to be family. For the past few years she’s been helping out as kitchen manager at the 4-H Cafe at the McLeod County Fair.

Terry Gallagher, who has helped Dede Hard serve 4-H lunches at the Minnesota State Fair for two decades, has joined her in serving food to the public at the Meeker County Fair and McLeod County Fair.

Dede Hard of Hutchinson has a rather unique perspective on the image of a family kitchen.

For 40 years she’s been a Minnesota State Fair staple, preparing and serving 38,000 meals each year to hungry 4-H’ers competing at the state level. For the past several years she has managed the kitchen, and she does it all on only a few hours of sleep each night at the fairgrounds.

“We become this little family that lives together for an intense two-week time frame,” she said Wednesday afternoon while fulfilling another role managing the 4-H Cafe at the McLeod County Fair.

This year is her third in the McLeod County kitchen, which serves a variety of meals to fairgoers. It’s a role she’s taken on in addition to the same job at the Meeker County Fair. She’s selected locally, but hired through the University of Minnesota.

“Everyone else in the kitchen is a volunteer and they come through their clubs to donate time so the food stand can make as much money as it can possibly make,” Hard said. “All the money goes back into the 4-H program.”

She was joined Wednesday, and previously at the Meeker County Fair, by Terry Gallagher, who has cooked with her at the State Fair since 1999.

“We call these our retirement fairs,” Hard said. After this year’s State Fair, she plans to step away and focus only on Meeker and McLeod counties.

The change comes after a State Fair career that started in 1976 when Hard was a 16-year-old living in International Falls.

“It was my first time away from that little town,” she said. “It was a bit of a culture shock.”

She signed up through the University of Minnesota Extension educator, following in the footsteps of her older sister.

Hard earned $16 a day at the time, “which was huge for somebody who had never been off the farm,” she said.

She also met a cook’s assistant, Bill, who she hit it off with. They dated long distance through college, and when they married they first lived by the state fairgrounds. Today they own Red Cedar Farms. Their 40th anniversary is this Sunday.

“He stays and takes care of the farm while I go and do the fair,” Hard said.

She took a few years off when her first daughter was born and then returned to cook from 1985 to 1992. She moved into a co-manager role with Molly Dollar, who started the same year she did. When Molly retired 15 years ago, Hard continued the role by herself, hiring and leading 30 staff each year.

With offerings for 4-H’ers ranging from roast beef to fresh desserts, cooking is done from scratch. One meal at the barns calls for 32 commercial-sized pans of cake cut into 70 squares.

“4-H isn’t an organization that opens a box and throws it through the microwave,” Hard said.

All of her own children have worked at the State Fair with her. For the past three years she has trained her son, Kevin, to help take over as a co-manager.

“It’s been so awesome to spend that time with each of them, as well as kids who come through who were children of the very first staff I was ever on.” Hard said. “Over 40 years, they’ve grown up and had children, and their children come to the fair, and it becomes a family event out there. The kids that come to work for me, sometimes it’s their first job. They’re brand new to the workforce, they’re 16. If they are good workers and they enjoy working there, they will stay through college, so I’ll have them for eight years. So it’s easy to get attached to them.”

She couldn’t help but tear up while describing how close she had become with many regular State Fair staff, and had been invited to weddings.“It has been my life,” she said.

As kitchen manager, Dede Hard has the inside scoop on favorite foods served to 4-H'ers at the Minnesota State Fair, and to visitors at the McLeod County Fair.

BEST IN MCLEOD: "I have to say the chicken salad, because it's cool and it's nice to have something cold when it's so hot. The burgers are the biggest movers, hands down."

A CHANGE IN TASTE: "There were a lot more hot dish items when I was a kid (at the state fair). We don't do those anymore. Kids don't like that as their food. They like things separate — here is your meat, your potatoes, your vegetables."

BEST AT STATE: "Everyone loves our fajita days. We'll do a taco bar they can come through and build their own. People like the cold meat sandwiches. The french dip is super popular. We do pork sandwiches. Sometimes we throw pizza in there."