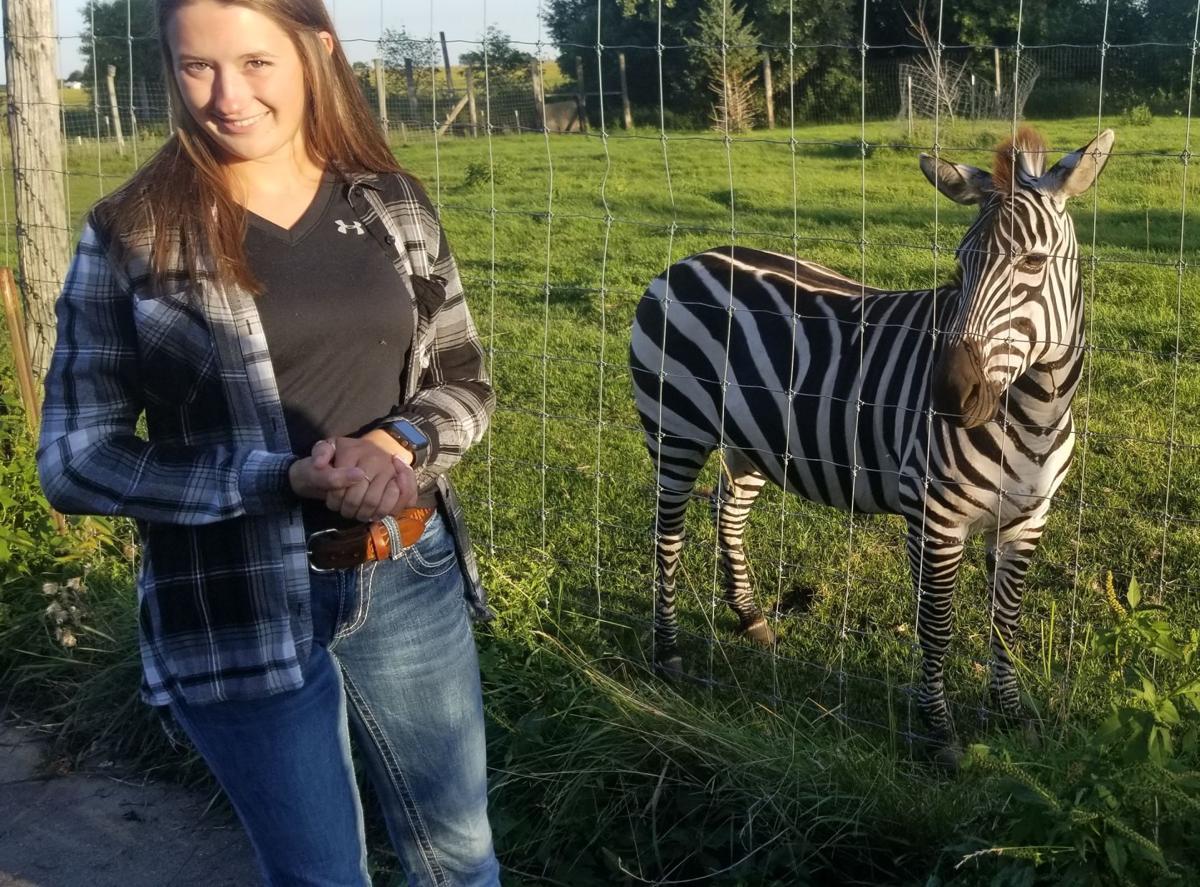 Kiley Lickfelt is with Dolly, one of two zebras living at her family's rural Hutchinson farm this summer. "I love them," she said. "I know they need to be handled with care." 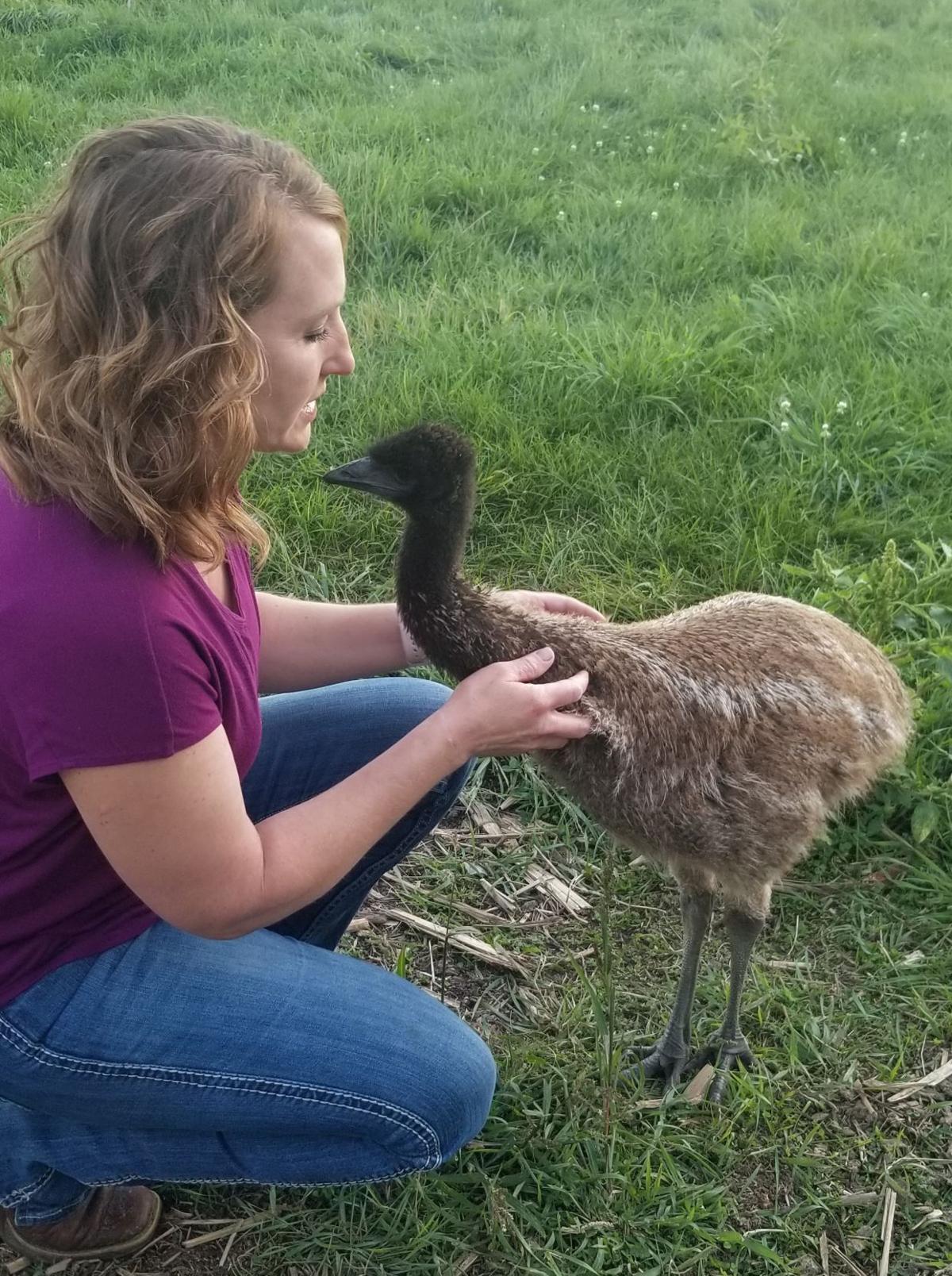 Trudy Lickfelt is spending some one-on-one time with an emu. The bird is second in size to the ostrich and primarily found in Australia. 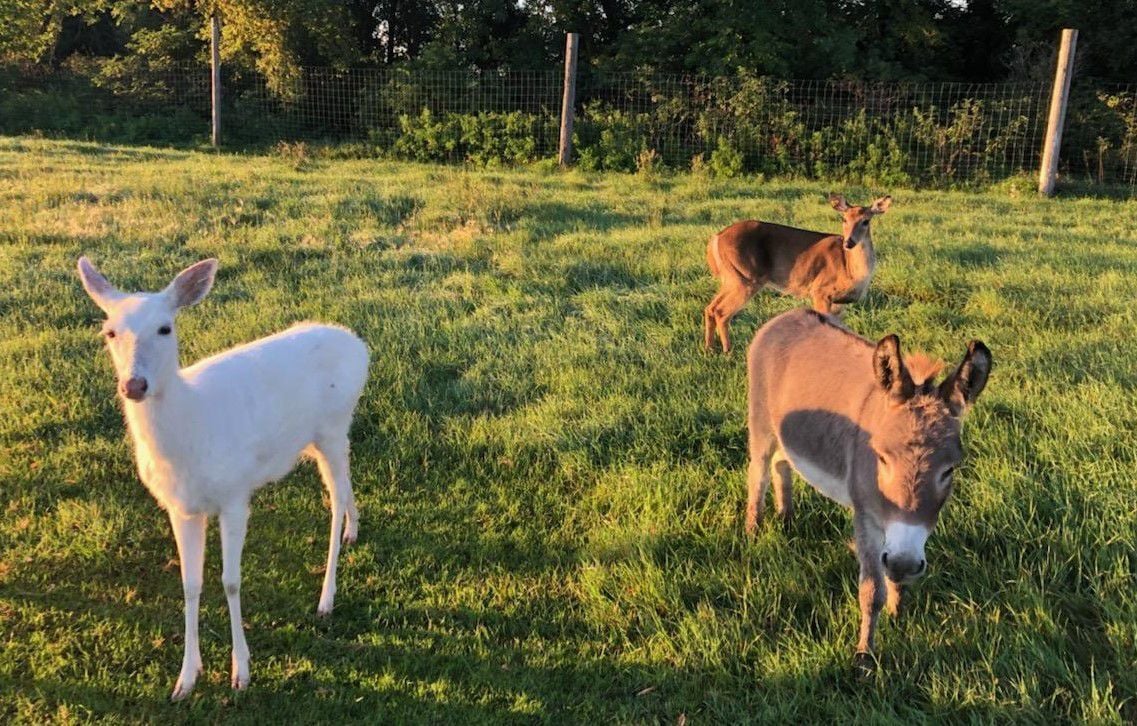 Snowflake is a fitting name for the family’s white, white-tailed deer. New to the menagerie is Stella, right, a one-year-old mini donkey, also called a “Jenny.” 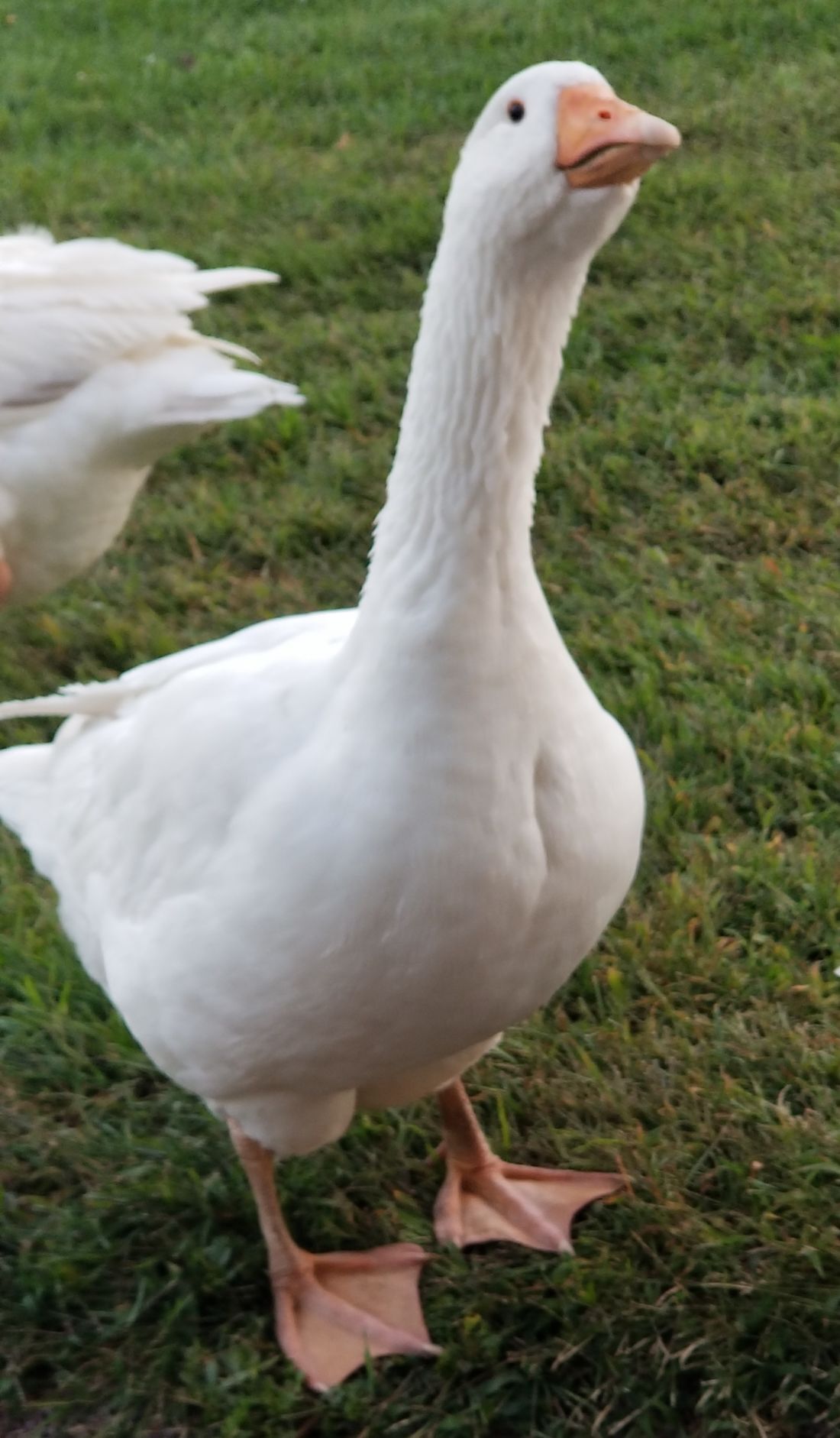 This Lickfelt family goose is a “nosy Parker” as it tries to be part of the Leader interview. 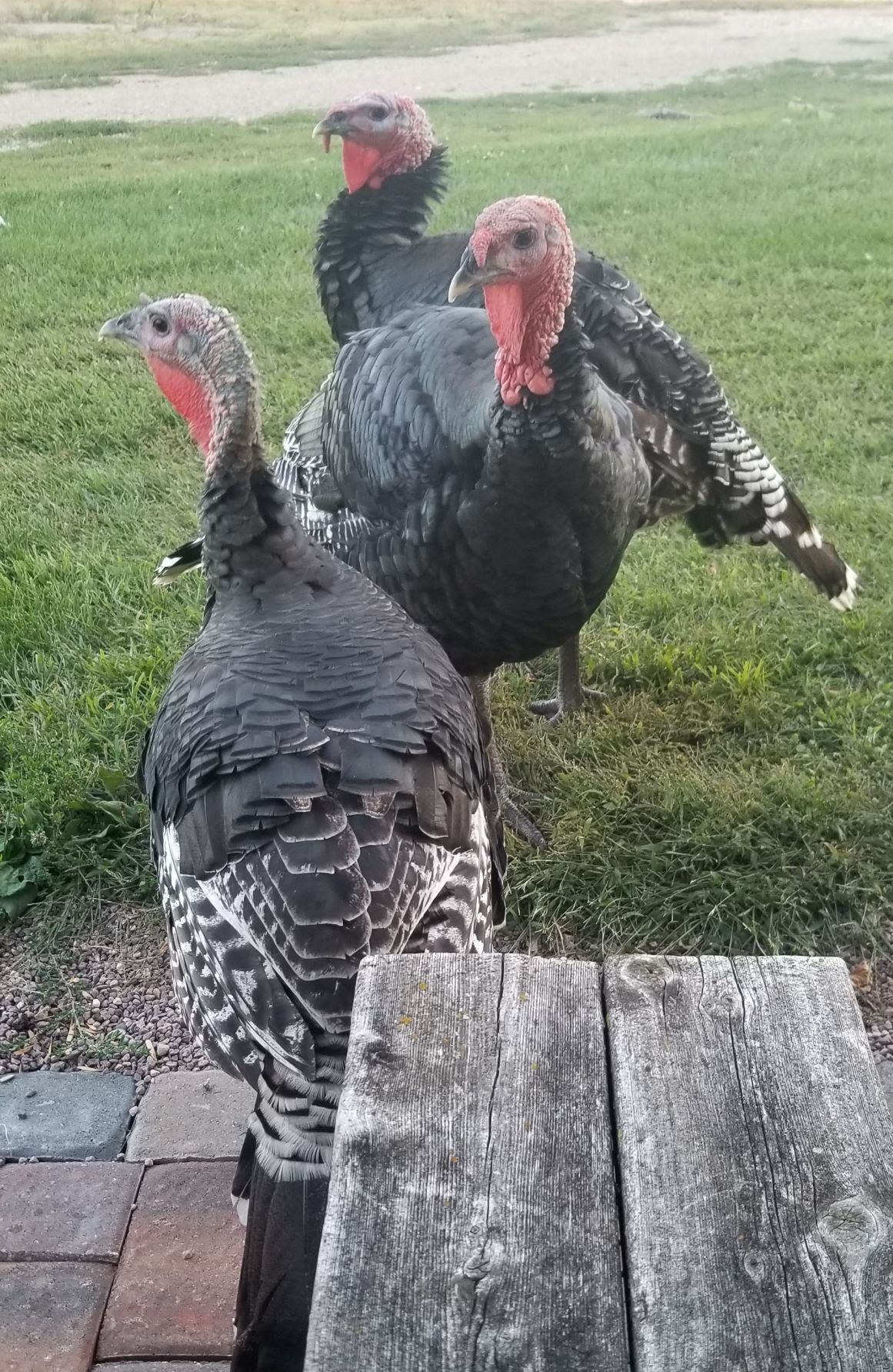 While the Lickfelts don’t have three French hens, they do have three turkeys that wanted to know what was happening at their picnic table.

Kiley Lickfelt is with Dolly, one of two zebras living at her family's rural Hutchinson farm this summer. "I love them," she said. "I know they need to be handled with care."

While the Lickfelts don’t have three French hens, they do have three turkeys that wanted to know what was happening at their picnic table.

When it comes to black-and-white Minnesota animals, Holstein cows come to mind. If you happen to drive along County Road 7, south of the School Road and South Grade Road intersection in Hutchinson, you're likely to come across a black-and-white sight of a different stripe.

It's not surprising to see drivers do a double take or even to pull over on the shoulder and take a longer look.

"It's not your typical black and white," Trudy Lickfelt, owner, admitted with a smile.

Lickfelt and her children Cullin, 21, and Kiley, 19, have been the proud caretakers of a pair of zebras since May. While zebras are an unusual choice, it's business as usual for this family of animal lovers.

The zebras — Marty and Dolly — are among the Lickfelts' animal menagerie, which includes: four emus, three dairy heifers, one horse, two goats, one donkey, one white, white-tailed deer, three white-tailed deer, geese, turkeys, chickens, cats, dogs Allie and Winnie, and one parrot in the house.

"We're called the funny farm," Kiley said. "People tease us. No one is ever surprised by what we get."

The family has lived at their present home for 18 1/2 years. It's down the road from Trudy's brother — Paul Wright.

"I grew up on a dairy farm," she said. "Having animals is natural."

In the beginning, Trudy said they had typical farm animals such as cows, chickens and so on. It was white-tailed deer that sparked their interest for something more exotic.

Remarkably, domesticated deer are more closely regulated than zebras. They must be tagged, inspected and contained in an 8-foot fence. If you move a deer, you have to submit paperwork to the state.

While the deer are permanent residents, the zebras are only visiting. They came to their home on the prairie via Safari North in Brainerd. The wildlife park was looking for an open pasture for the summer because they needed to separate a pair of zebras. Kiley saw it as a once-in-a-lifetime opportunity.

"When I was younger I always wanted zebras," she said. "It was too risky. They can be aggressive."

"She was obsessed," Trudy chimed in.

When the zebras arrived in May, Kiley said she shed "tears of joy."

"It's really a dream come true," she said. "I get to take care of them every day."

Dolly, the female, was bottle fed and is the tamer of the two. Marty, the male, was raised by its mother and is wild. While they are beautiful to look at, the family keeps the fence between them and the zebras because they can nip and kick.

"I love them," Kiley said. "I know they need to be handled with care."

"When you've grown up with animals, you can read the cues," Trudy added.

ATTACKED BY AN OSTRICH

The Lickfelt family is well aware the exotic animals in their care are wild at heart. Ostriches were among their favorites.

"We loved the idea of the bigger birds, but the last one we had attacked Kiley," Trudy said.

Like the vicious velociraptor of "Jurassic Park" fame, each of the ostrich's two-toed feet has a long, sharp claw, which with a swift kick of its powerful leg can kill a lion.

"I was doing chores, home alone, and I went into the pen to feed it," Kiley recalled. "The ostrich came up behind me and attacked me, bruising my back and ripping my jeans. I ran into the shed and climbed up a wall. It was the scariest situation of my life."

After that, the ostrich was removed, but they missed the concept of a large bird, so Kiley did some research and found emus. While ostriches hail from Africa, emus are found in Australia.

"We were intrigued," Trudy said. "The emu has a purplish shell (on its eggs). They're calmer than ostriches. We bought six fertilized eggs and only one hatched."

Kiley raised it in her room. More emus were added this spring, bringing the flock to four. Interestingly enough, female emus make a drumming sound while males make more of a grunt.

In August, the Lickfelts added a "Jenny," to their holdings. It's another name for a mini donkey. Trudy said they'll need to work with Stella, halter break her and get her to eat from their hands.

It's not surprising time and time again, Trudy, Cullin and Kiley are asked, "Why?"

"We have them so people can enjoy them," Kiley said. "We love animals and can't imagine not having them."

Trudy, who is the territory manager for MWI Veterinary Supply, responds by referring to her agricultural roots.

"For us, it's an opportunity to familiarize people with ag and where their food comes from," she said.

Trudy isn't the only ag advocate in the family. Cullin and Kiley followed in the family footsteps and grew up with 4-H.

"Since sixth grade we've been advocating and educating," Kiley said. "The State Fair is the biggest platform. There's no boundaries between the farmer and the public."

Kiley is also spreading the buzz about the importance of agriculture as a McLeod County dairy princess. She shares information and answers questions at parades and personal appearances.

"It's a rewarding experience," she said. "I can clear up misconceptions and help provide a better understanding of how ag works."

While Kiley is following her mother in studying animal science at the University of Wisconsin-River Falls, her brother spent one year at South Dakota State University at Brookings. He decided college wasn't for him, came home and works for local farmers, operates a road grader and started his own hay business: Lickfelt Livestock Forages.

Next up for this local "Dr. Doolittle" family?

"My mom is intrigued by camels," Kiley said with a grin.

"I was doing chores, home alone, and I went into the pen to feed it. The ostrich came up behind me and attacked me, bruising my back and ripping my jeans. I ran into the shed and climbed up a wall. It was the scariest situation of my life."