If you have wondered what would come of a series of open houses, focus groups and surveys discussing the safety of U.S. Highway 212 and State Highway 22 in Glencoe, the answer was discussed at Tuesday's McLeod County Board meeting.

"We did quite a bit of public engagement with this plan," she said. "We got some great feedback from the community about what their priorities were and incorporated that into the plan."

Chandler Avenue: This intersection on Glencoe's west side near the upcoming McLeod County Government Center saw 10 crashes from 2013 to 2017, according to data provided in MnDOT's Glencoe Transportation Study. Three of the crashes were severe and one was fatal. To address the concern, MnDOT wants to build a J-turn — also sometimes called a reduced conflict intersection. 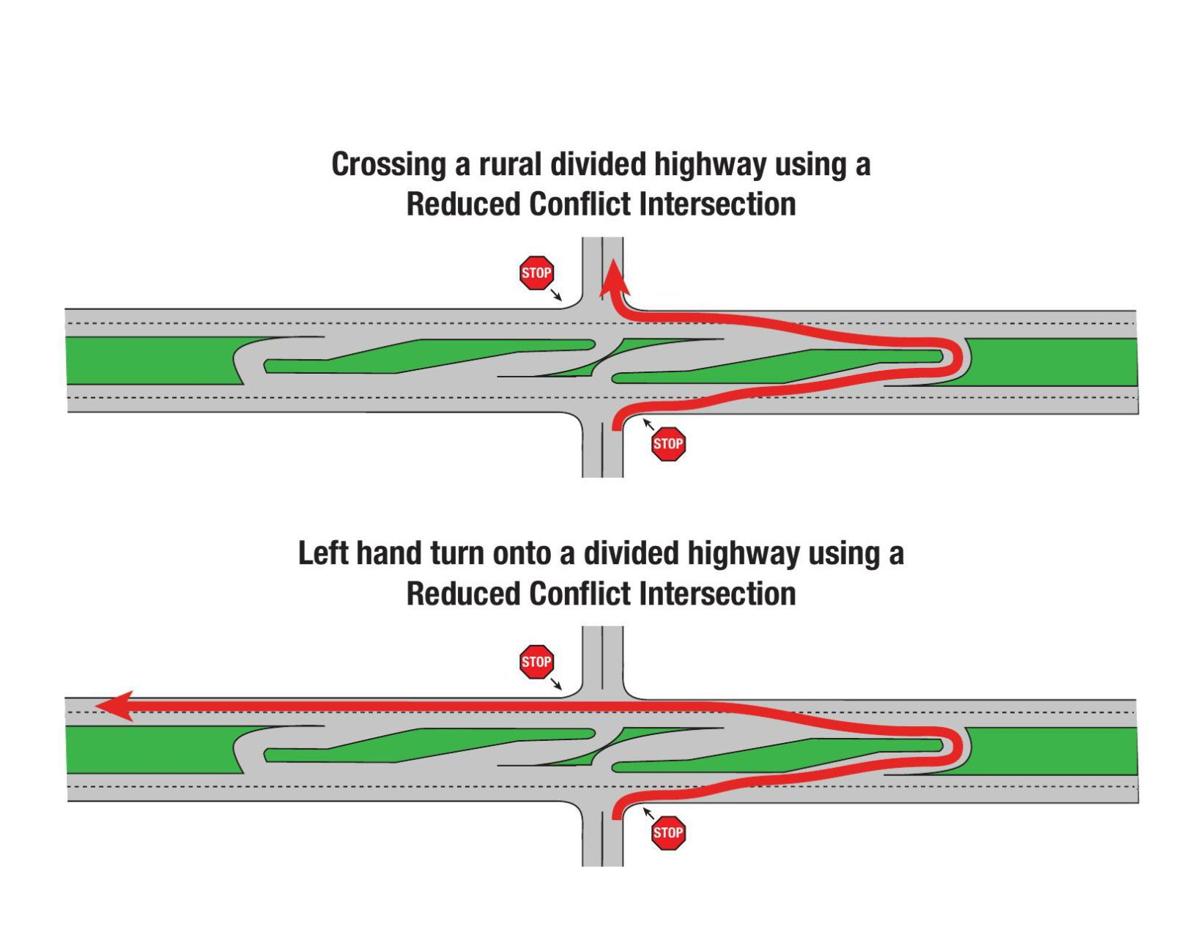 While J-turn intersections look strange, MnDOT says studies show they reduce fatalities by 70 percent and crashes by 42 percent. They are also faster to build and less expensive than an intersection with a stop light or interchange.

"(In Minnesota) we have not seen a single fatal crash at any of the intersections where they were installed," Bruer said.

Morningside Drive: This intersection beside Burger King has been the site of 26 crashes from 2013 to 2017. Most were not severe, but 58 percent were angle or T-bone crashes. The Glencoe Transportation Study calls for a roundabout at the intersection.

In the study, MnDOT says roundabouts reduce fatal crashes by 86 percent and decrease the injury crash rate by 42 percent. Roundabouts slow traffic to improve safety but do not slow overall traffic flow as much as stop lights. They also reduce the distance pedestrians and bikes need to cross and the directions they need to watch.

"Both of those (Chandler and Morningside) we have applied for special safety funds," Bruer said. "We hope to find out whether they were funded this spring."

If funded, the Morningside and Chandler projects would be scheduled for 2023 or 2024.

Falcon Avenue: The intersection by Glencoe Fleet Supply is recommended to stay as it is, though pedestrian and bicycle safety enhancements could be included with any future projects. Such enhancements would be determined during a design process with community input. No funds are currently available for construction.

County Road 69: MnDOT recommends closing the median at this intersection just east of Falcon Avenue. As a result, only right turns to and from Highway 212 would be possible. No funds are currently available for construction.

There has long been interest in finding a way to direct Highway 22 traffic, including heavy trucks and semitractor-trailers, around Glencoe. The road's route currently travels through the city's downtown to reach Highway 212. The Glencoe Transportation Study took a fresh look at old plans that never came to fruition and considered new routes as well.

Bruer acknowledged local preference to identify one preferred route, but MnDOT had narrowed it down to four. All proposed routes received positive marks because they are less confusing, serve personal and commercial drivers, reduce traffic in residential zones and school zones and improve conditions for walkers and bicyclists:

"Are we open at all to the concept of having a provisional route?" Board Member Ron Shimanski asked.

Bruer said MnDOT is open to an interim solution. Chandler Avenue had been considered but passed over.