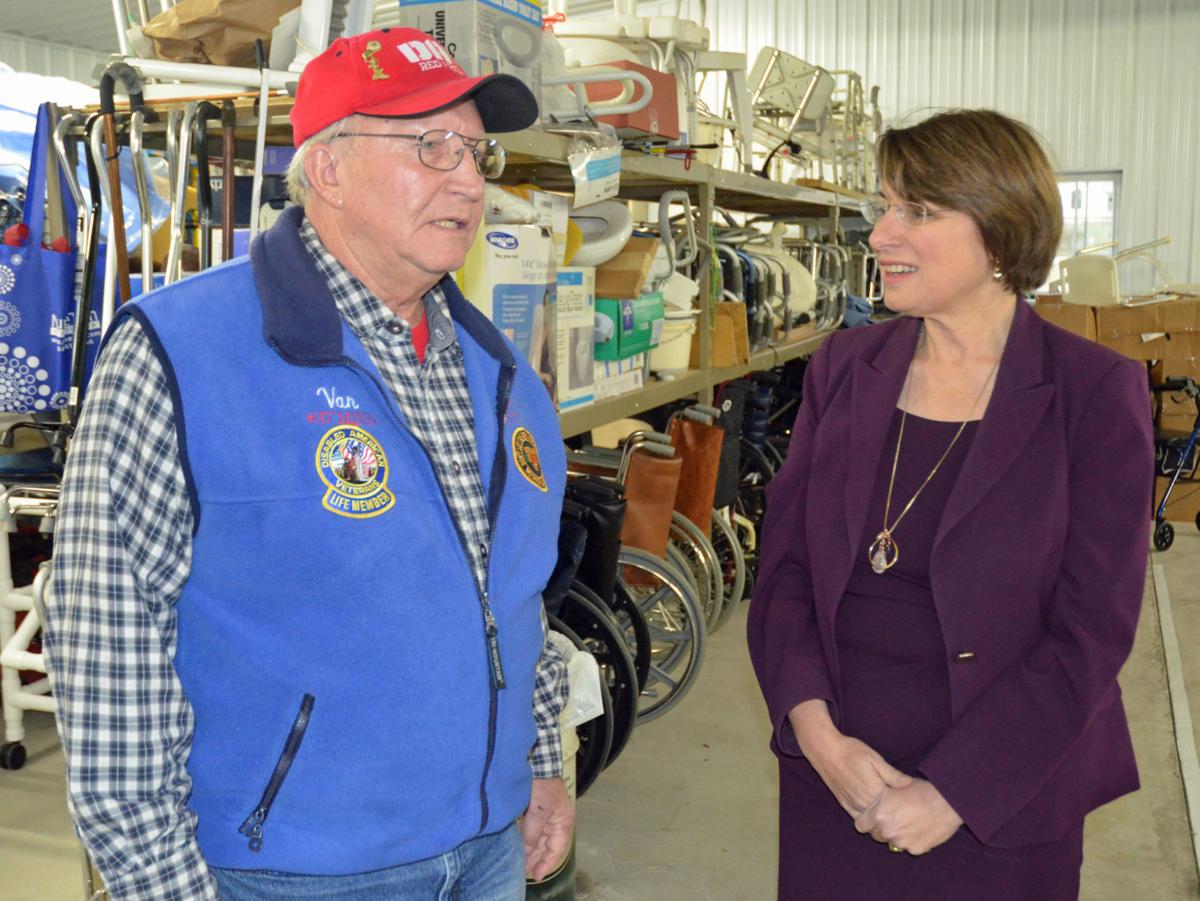 Van Karg of the Disabled American Veterans offered Sen. Amy Klobuchar a tour of the DAV's building at 177 Third Ave. N.W. The DAV provides adaptive equipment to veterans and their family members as well as rides to medical appointments. 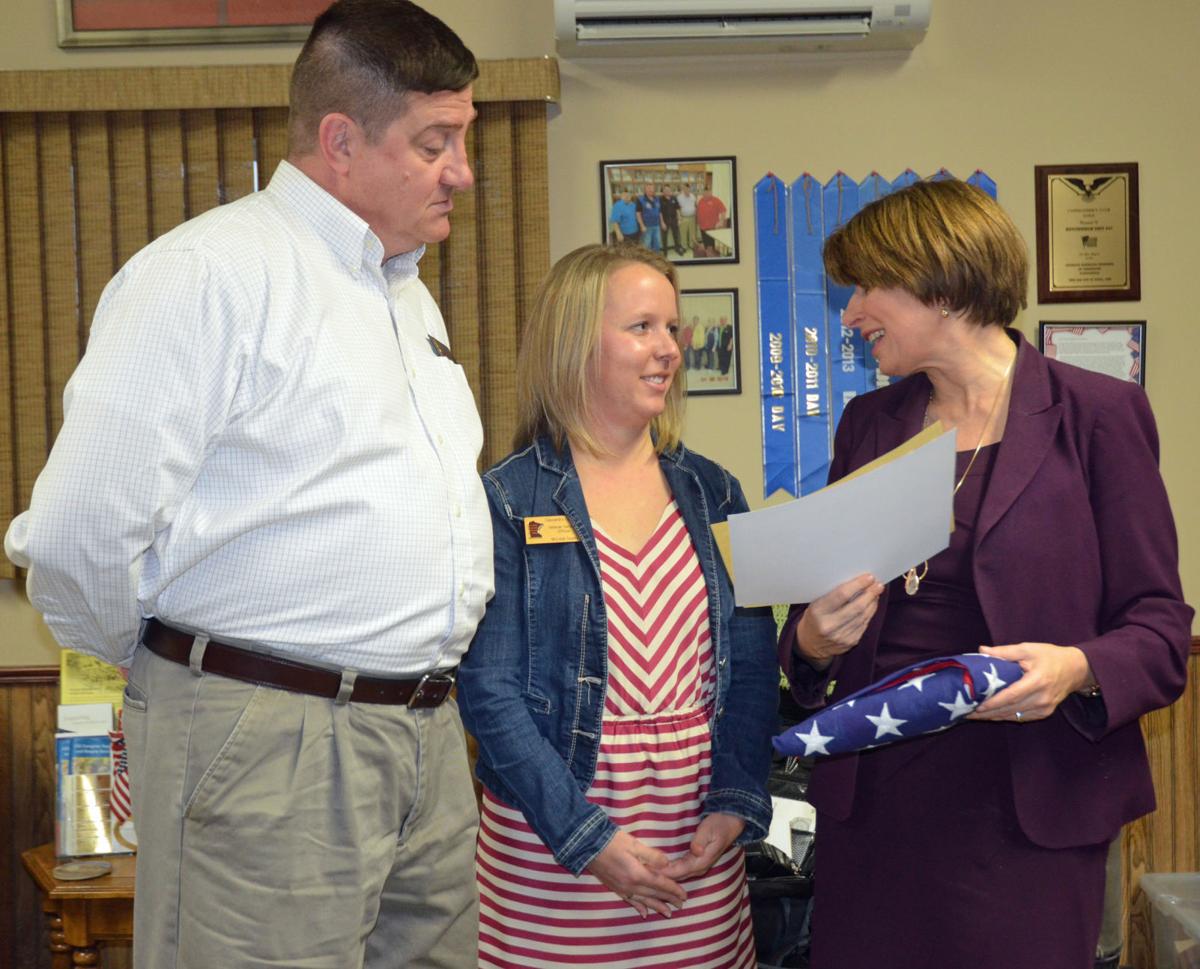 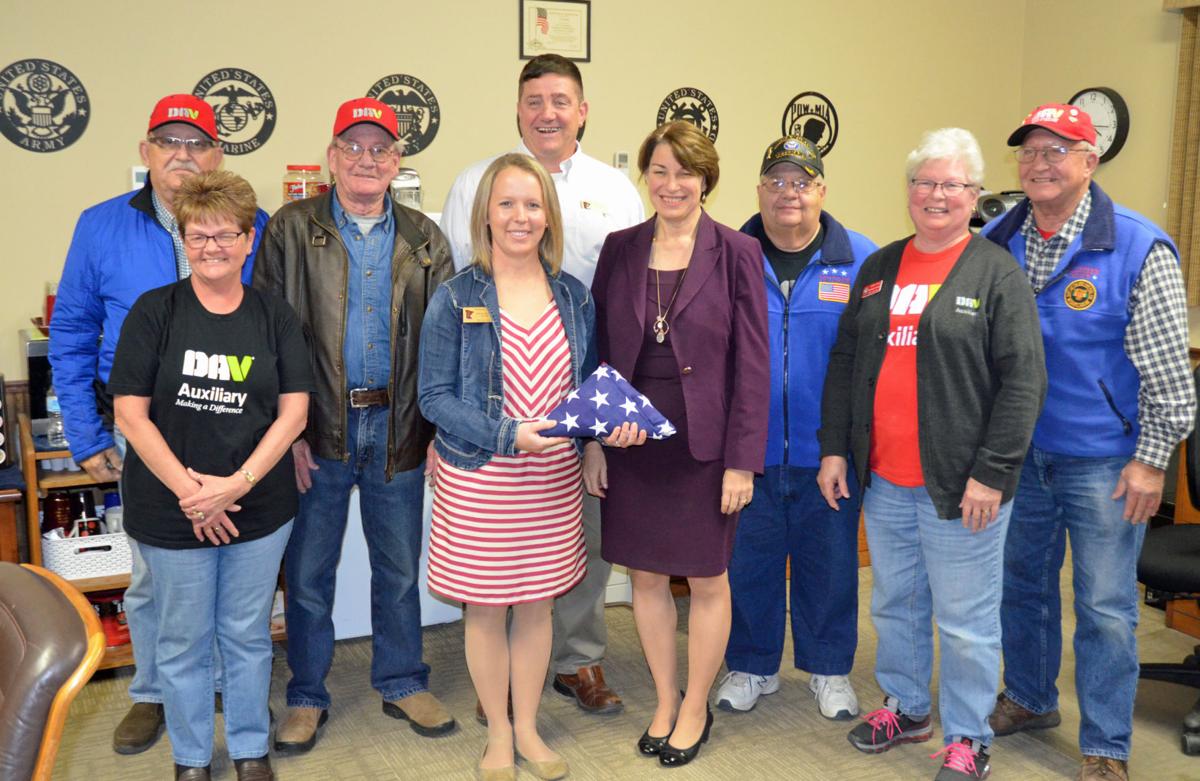 A group photo was taken of Sen. Amy Klobuchar with members of the Disabled American Veterans.

Van Karg of the Disabled American Veterans offered Sen. Amy Klobuchar a tour of the DAV's building at 177 Third Ave. N.W. The DAV provides adaptive equipment to veterans and their family members as well as rides to medical appointments.

A group photo was taken of Sen. Amy Klobuchar with members of the Disabled American Veterans.

Sen. Amy Klobuchar visited Hutchinson on Friday to honor local veterans and learn how Congress can better serve them.

By the time the second-term Democrat departed, she had an insider’s perspective of the local Disabled American Veterans chapter’s efforts. And she had a better understanding of how the group works with other organizations, including the McLeod County Veterans Services Office.

Klobuchar praised their work and said “there’s no better example” of volunteers helping veterans than the DAV’s efforts in Hutchinson.

“All the various things all of you are doing — repairing wheelchairs and driving all over the place to help our veterans — (you) guys are on the front line and it means so much,” she said.

Van Karg, accompanied by a half-dozen other DAV members, led Klobuchar on a tour of the group’s new building on Third Avenue Northwest. A large garage is used to store wheelchairs, lift chairs, walkers and other equipment for disabled veterans. It also serves as a garage for the DAV’s vans, which take veterans to medical appointments.

“We’ve got 11 volunteer drivers,” Karg said, adding that more than 42,000 miles were driven during the past year to serve 960 patients.

“They take people and their family members to places that we don’t go to,” Lauer said. “ … So the nice thing is they are symbiotic with our formal veterans transportation program. We do a lot of cross referrals.”

Klobuchar also listened to concerns about changes in the VA system, and what Congress can do to stabilize or improve benefits.

Health care is the greatest concern, especially for veterans in rural areas who live far from VA medical centers, according to Lauer. He said the 3-year-old Veterans Choice Program has complicated access to care for many rural veterans.

“Where do most of the veterans here go for their medical care?” Klobuchar asked.

Knowing which services are available at each of those sites has enabled Lauer and Carrigan to advise veterans on their best options.

Information technology at the pair’s disposal has been a mixed blessing. For example, the computerization of veterans’ claims has created more work.

“We like the idea of being able to pull everything together but we need access to all the various systems in order to do that,” Lauer said.

Karg wanted to know why Congress has not yet passed the Family Caregivers Act, legislation that would create a national strategy to bolster training and support for caregivers of older adults, people with disabilities and veterans.

“We don’t know the whole story … why is it taking so long?” he asked.

Klobuchar said she is closely following the legislation, which is sponsored by two House Republicans.

She is also one of two Democrats sponsoring the Americans Giving Care to Elders Act, which would provide a tax credit to family caregivers of a parent or grandparent for up to $6,000.

Karg brought up Klobuchar’s sponsorship of the Burn Pits Act. The proposal would create a Center of Excellence within the Department of Veterans Affairs to deal with mounting evidence that thousands of veterans have become sick after being exposed to toxic substances burned in large pits in Iraq and Afghanistan.

“There are some really sad stories going on,” Klobuchar said.