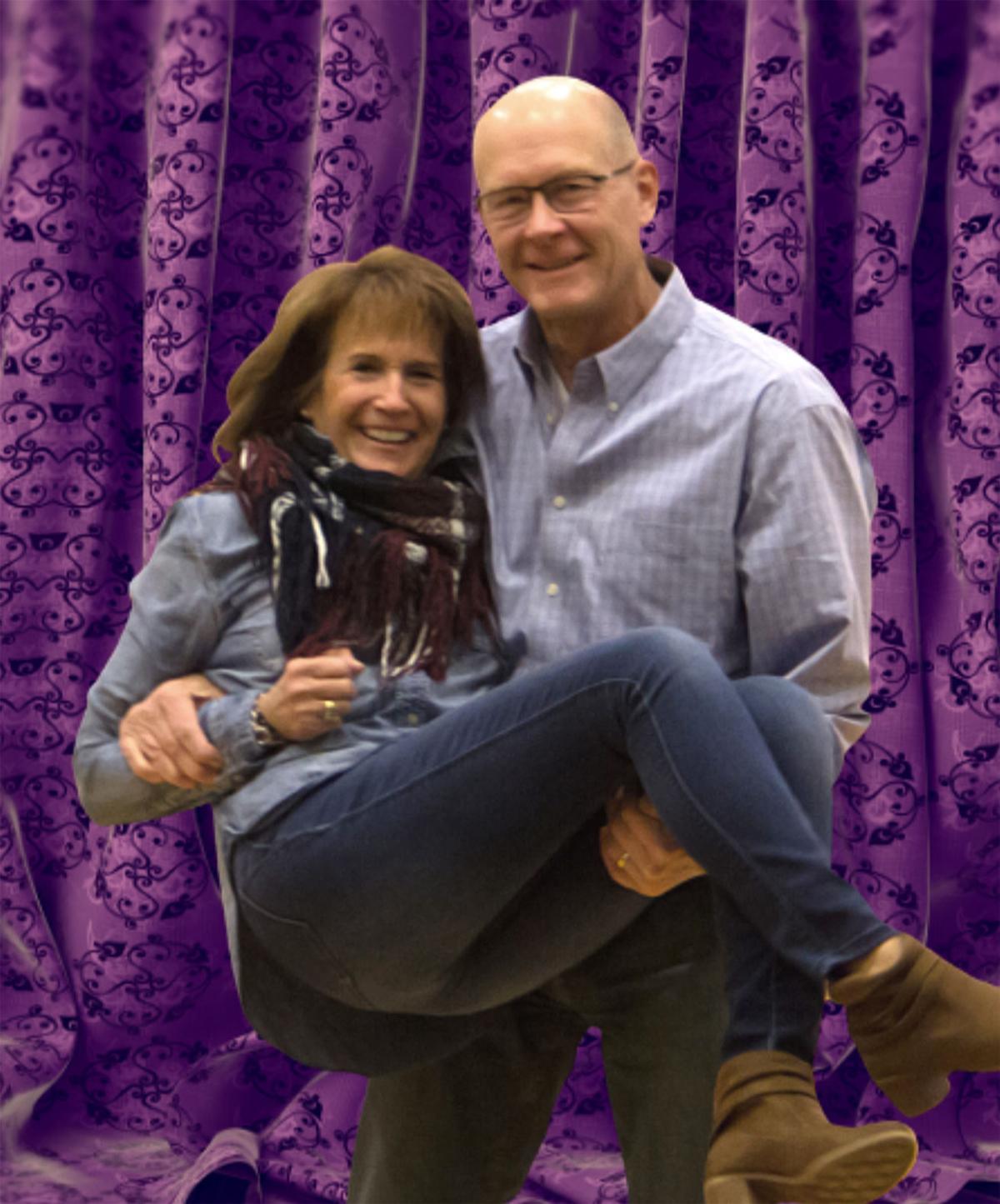 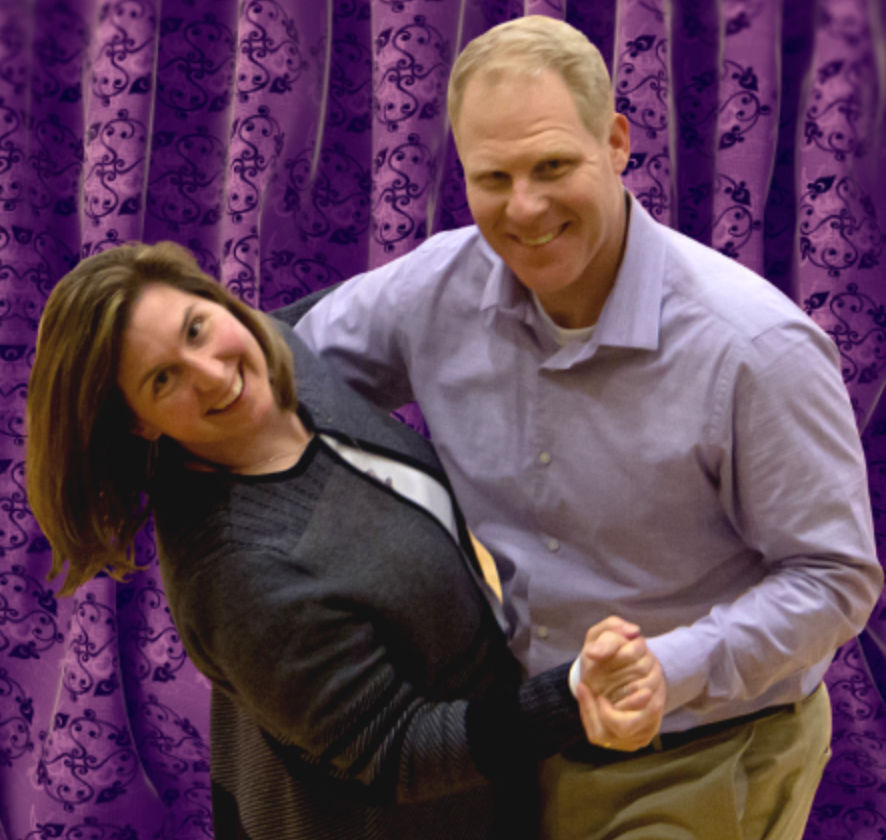 Among Sunday's competitors will be Clark and Susan Christianson of Glencoe. 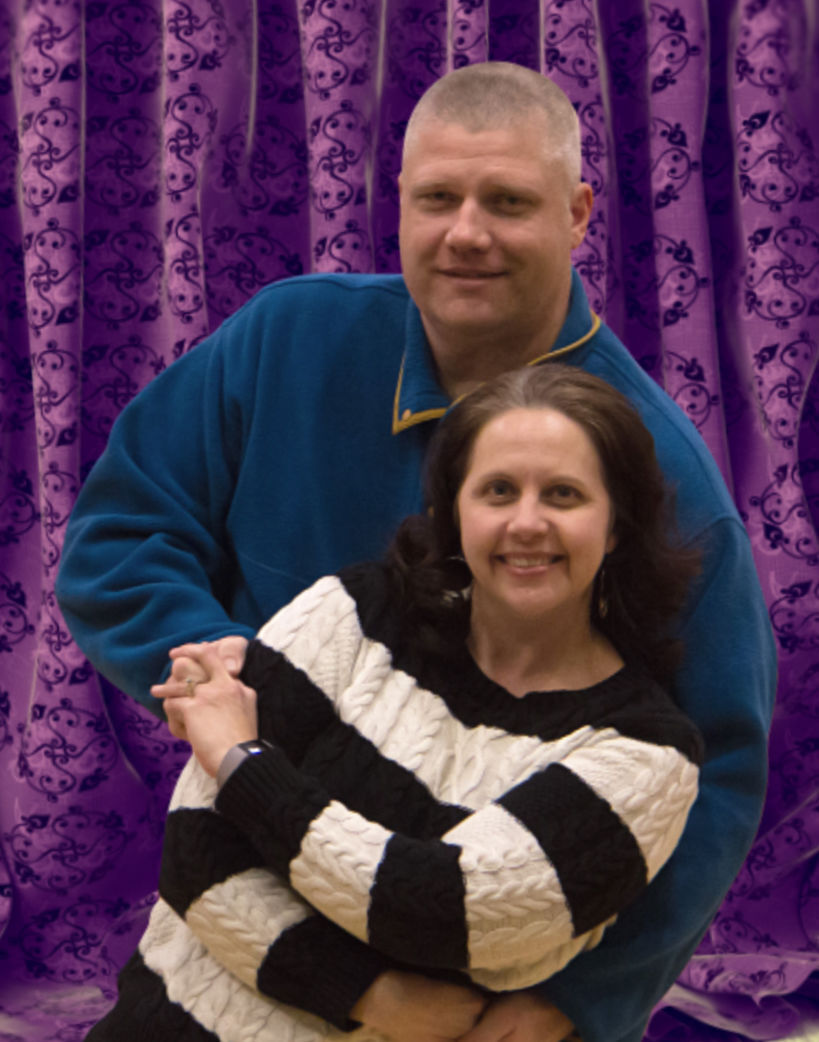 Shining in the "Dancing Like the Stars" spotlight will be Brook and Sue Magnuson of Glencoe. 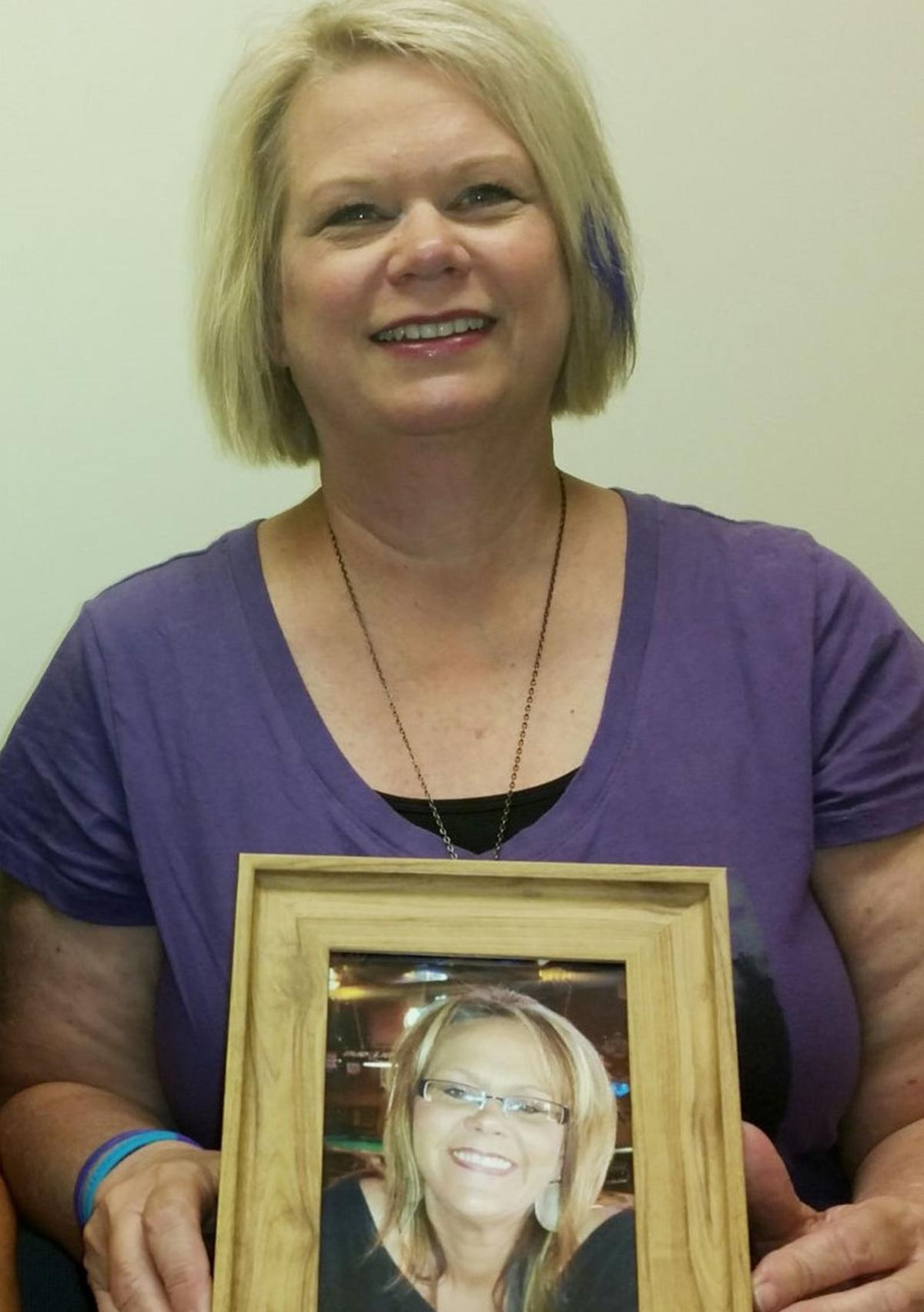 Suicide survivor Tammy Diehn of Arlington founded 2BContinued and is leading the drive to raise awareness about suicide prevention, mental health and wellness. She is holding a photo of her sister, Shelly Teubert, who died by suicide in 2017.

Fundraiser inspired by a song 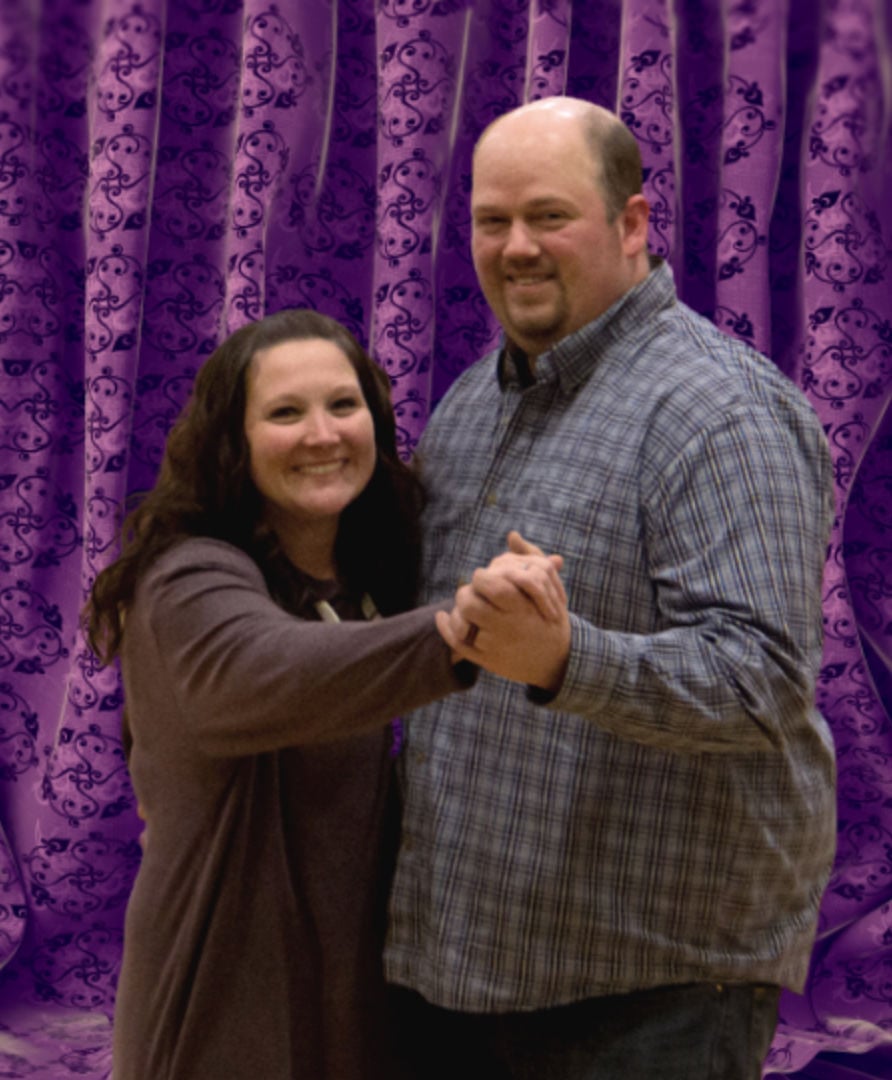 Among Sunday's competitors will be Clark and Susan Christianson of Glencoe.

Shining in the "Dancing Like the Stars" spotlight will be Brook and Sue Magnuson of Glencoe.

Have you ever wondered what it's like to cha cha to a Latin beat, or gracefully swirl to a Viennese waltz? Tune in at 6:30 p.m. Sunday, April 11, for “Dancing Like the Stars.” Hosted by 2BContinued, the new fundraiser, which benefits suicide prevention, mental health and wellness, features 11 local couples who will compete for fun, fame and funds in a full production, live-streamed show.

In case you're wondering where the money raised from this event is going, Tammy Diehn, founder of 2BContinued, said it will help carry out the nonprofit's mission to increase awareness of suicide prevention, mental health and wellness. The group does this through a variety of ways including advocacy, education and outreach through activities such as a monthly suicide loss support group, continuing education conference for professionals, interventional trainings and community-based trainings.

INSPIRATION FROM A SONG

The idea for the fundraiser came together one Saturday morning in March 2019. At the time, Diehn had been pondering the idea of forming a nonprofit in memory her sister, Shelly Teubert, who died by suicide in 2017.

“I kept trying to think of a way to focus on how she lived instead of how she died, while still raising awareness about suicide prevention and mental health,” Diehn said. “I’m usually pretty creative but this time I just wasn’t coming up with anything that seemed to fit. However on this day, while driving and listening to a CD of some of Shelly’s favorite songs, the song, 'I Hope You Dance' by LeeAnn Womack came on. For whatever reason, that day the lyrics to the song jumped out at me. I was overcome with emotions and had to pull over because I was sobbing so hard. In that moment, I felt a sense of comfort. It was like she was talking to me through the lyrics of the song, inspiring me to positively encourage others.”

Music and dancing were links the two women shared. Everything clicked for Diehn when she remembered her coworkers talking about the "Dancing Like the Mankato Stars" event.

"I was excited about the thought of it and immediately looked to see what day of the week Shelly’s birthday would fall on in 2020," Diehn recalled. "It was a Saturday. I knew right then and there, I was going to form the nonprofit organization and plan a 'Dancing Like the Stars' show as the annual signature fundraising event."

Although the 2020 event didn't work out due to COVID-19, the dancers are back and ready to show their skills virtually this year.

The following couples are participating in “Dancing Like the Stars”:

"They are local physicians, health care professionals, behavioral health therapists, educators, financial advisors, insurance agents, general laborers and so on," Diehn said. "One by one, we approached couples and paired them with a choreographer to learn a dance for this friendly competition."

Hutchinson dance instructor Kelly Bestul was one of the local choreographers who worked with three of the couples.

"I have been working with Dean and Carol Nissen, as well as Tina and Cory Carr, and April Trebelhorn and Phil Grochow, as choreographer/coach for 'Dancing Like the Stars,' Bestul said. "My role has been in the creation and rehearsal of all three of those routines. It has been a lot of fun working with all these couples because it was a 'blank canvas,' if you will, and turning it into an experience for them, as well as myself.

"All these couples were apprehensive at first, seeing their only experience with couples dance was just socially at weddings and such," Bestul added. "As they put it to me, they loved to dance, but only if it was the right song and in a group setting. Through our rehearsals, they became more and more confident in themselves and their underlying abilities, which they didn't know they had. All of them took the risks I asked them to take and were very responsive to all I had to throw at them. They definitely surprised themselves."

To find out more about the event and how couples prepared, the Leader reached out to the Nissens with a few questions:

How did you come to be involved in "Dancing Like the Stars"?

Dean was asked by one of the clinic nurses to participate. We initially said no because we were anxious about dancing in a competition, however, we decided it was something we should do. It is obviously for a good cause, as most families have been affected in some way by mental illness and/or depression. COVID has only increased the frequency of these issues.

Has it been challenging with the COVID-19 pandemic? I know this event was originally scheduled to be live at the Glencoe City Center and then it was rescheduled and now it's online. How did this affect your training and your mindset?

We practiced last year to be ready for the event. With COVID forcing the event to be canceled for a year, we are now even older and some of the moves are harder. It is also more challenging to remember all of the steps.

Did you have an interest in ballroom dancing? When did you start training, and how often do you rehearse?

We really didn't have an interest in ballroom dancing. We like to dance, but it is usually only at wedding receptions. Carol does like to watch "Dancing with the Stars" on television. Like we said before, we trained last year before the event. During the year of COVID we really didn't start dancing again until Tammy contacted us to let us know the event was back on. Since February we have met with our choreographer, Kelly Bestul, several times and try to go through the routine in our home as best we can.

What do you love most/least about ballroom dancing?

It is just fun to dance and something we can do together. Learning a choreographed dance routine is a totally new and challenging experience.

Why should the public watch and support this event?

We think it will be a fun event to watch, as the couples involved have been working really hard to do the very best they can on their dance routines. Also, it is a good cause to support, with so many families touched by mental illness and depression.

Are you glad you agreed to be part of this?

Yes, we are glad, "we think." We are getting nervous and don't want to fall on our faces or any other body part. Tammy Diehn and her committee have put a lot of work into making this event something the community will enjoy and also be a successful fundraiser for 2BContinued.

How to watch: Sign up to get the free link at 2bcontinued.org/DLTS