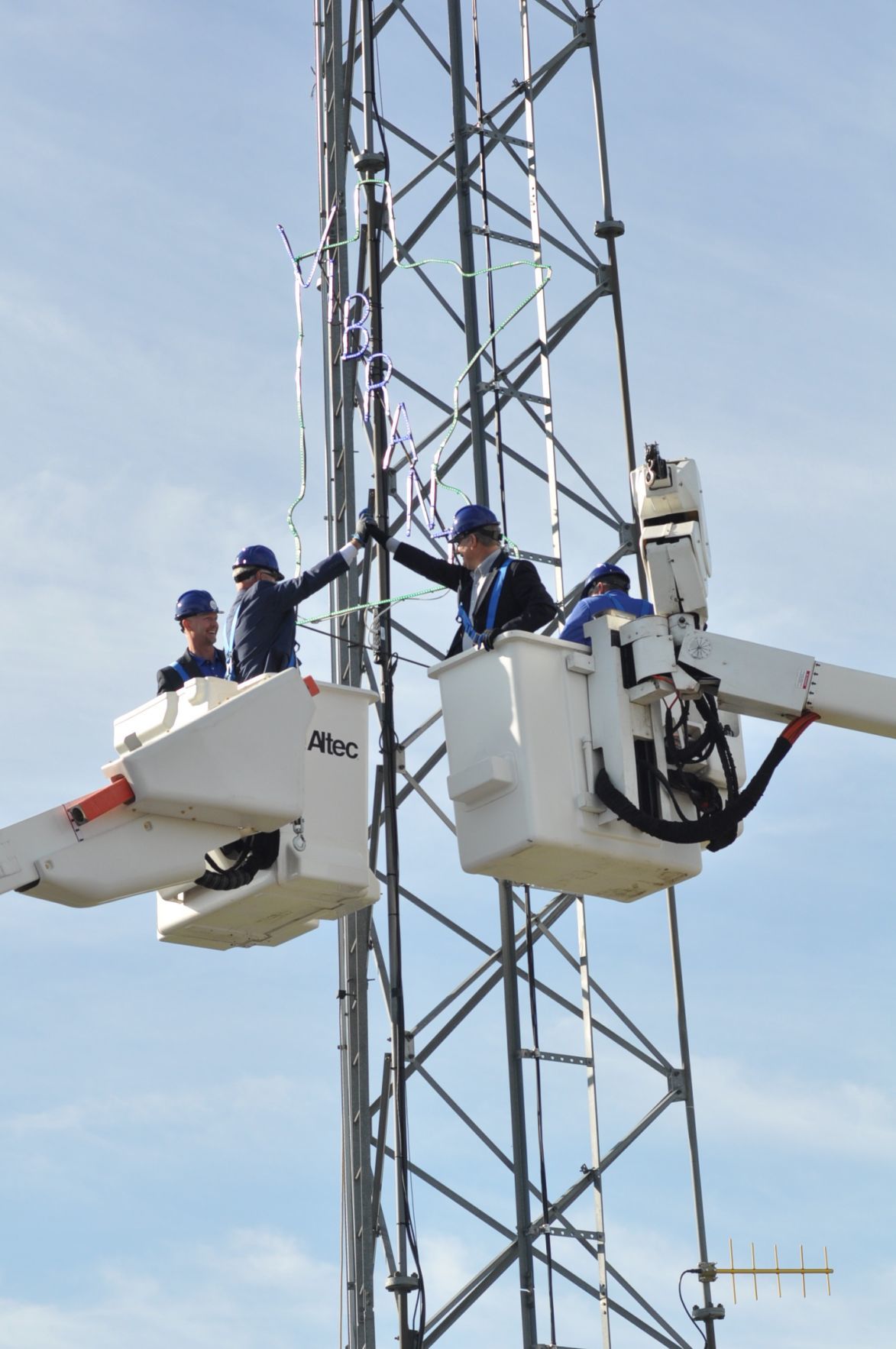 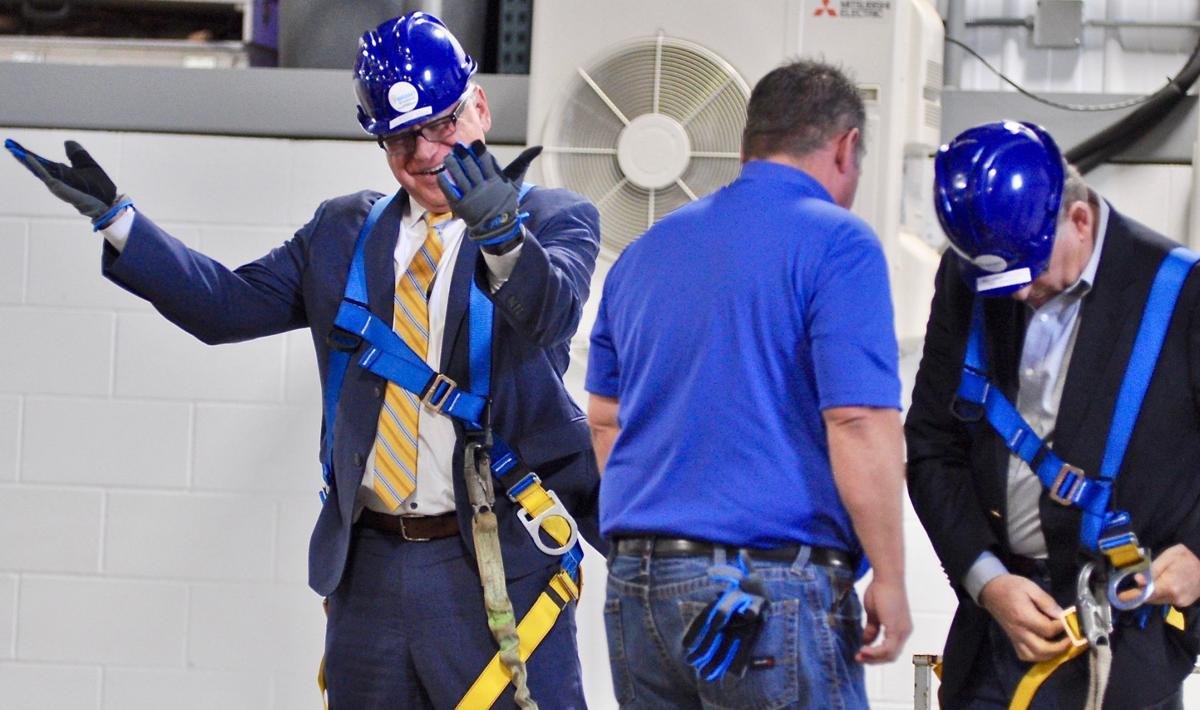 Gov. Tim Walz gestures to the audience after suiting up for the Vibrant Broadband ribbon cutting — an event that took place high in the air outside Meeker Cooperative’s Litchfield headquarters. 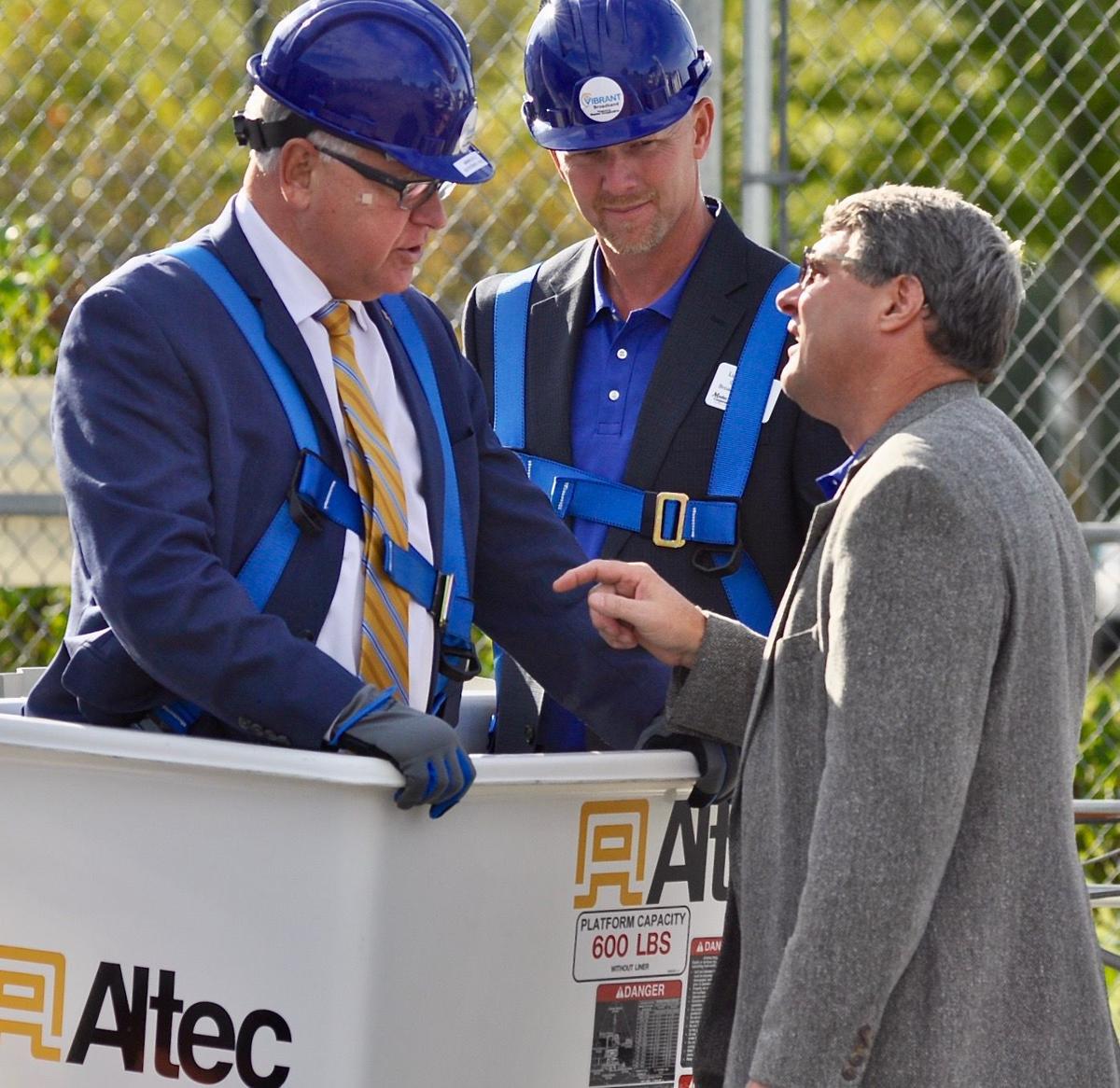 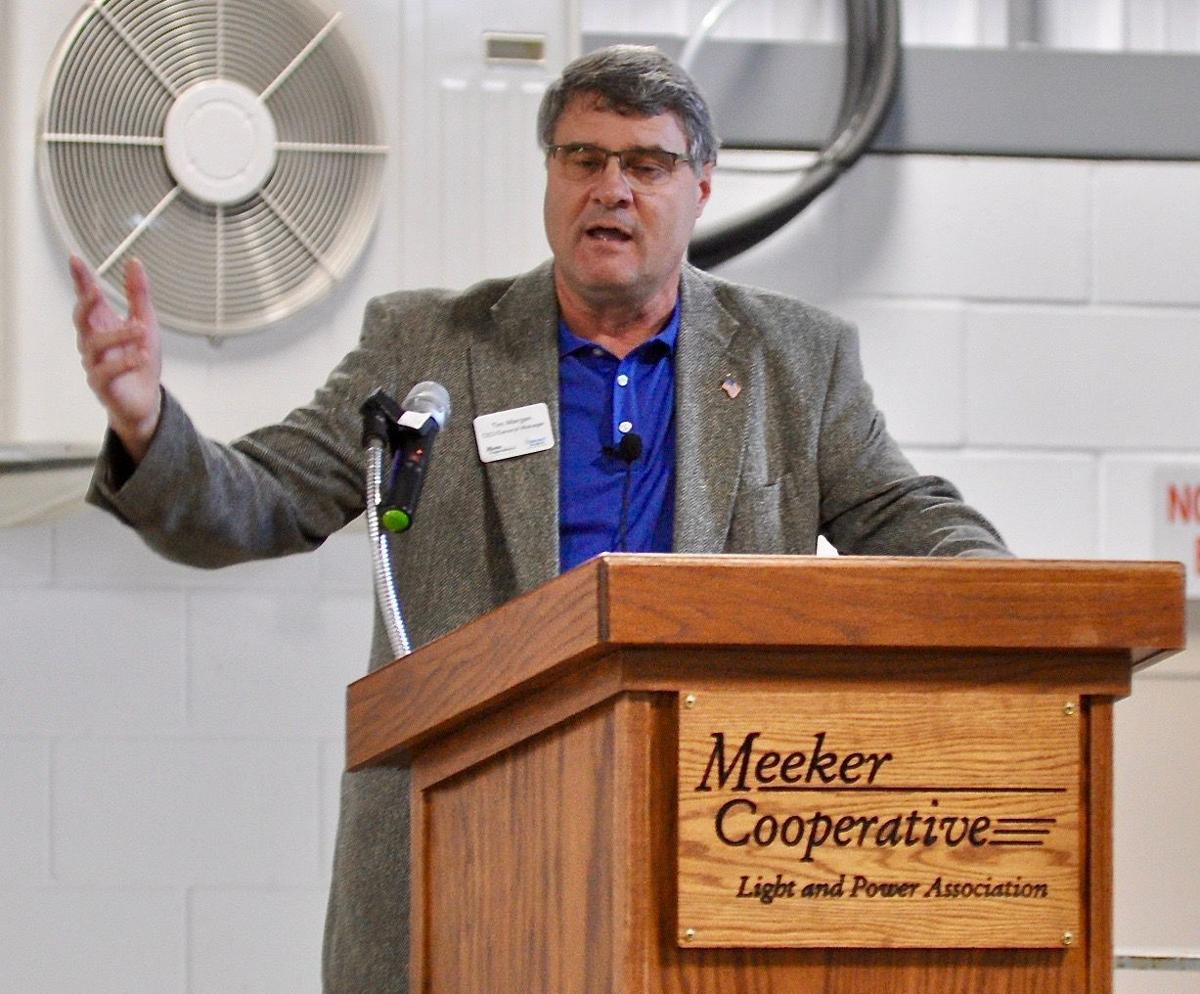 Meeker Cooperative CEO Tim Mergen speaks to a crowd of dignitaries, employees and cooperative members during the dedication ceremony for Vibrant Broadband Thursday. 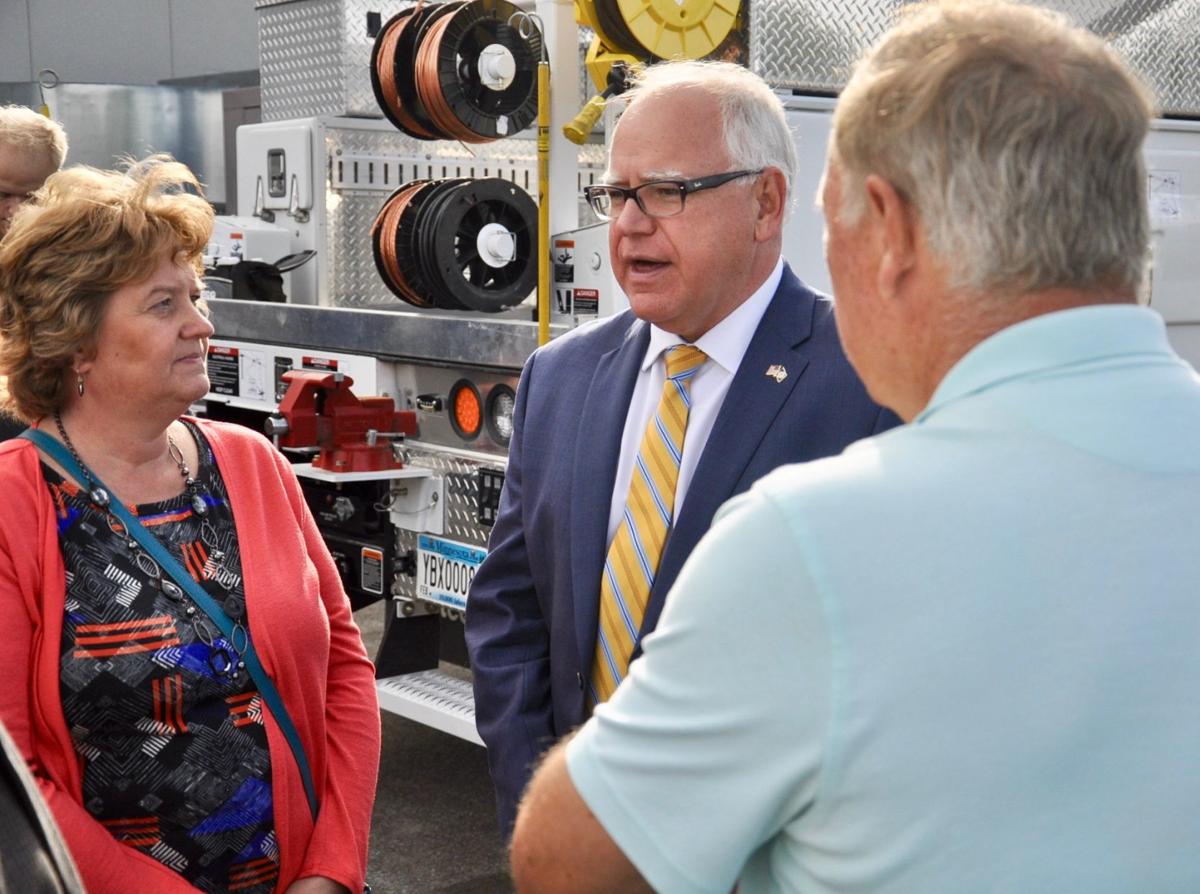 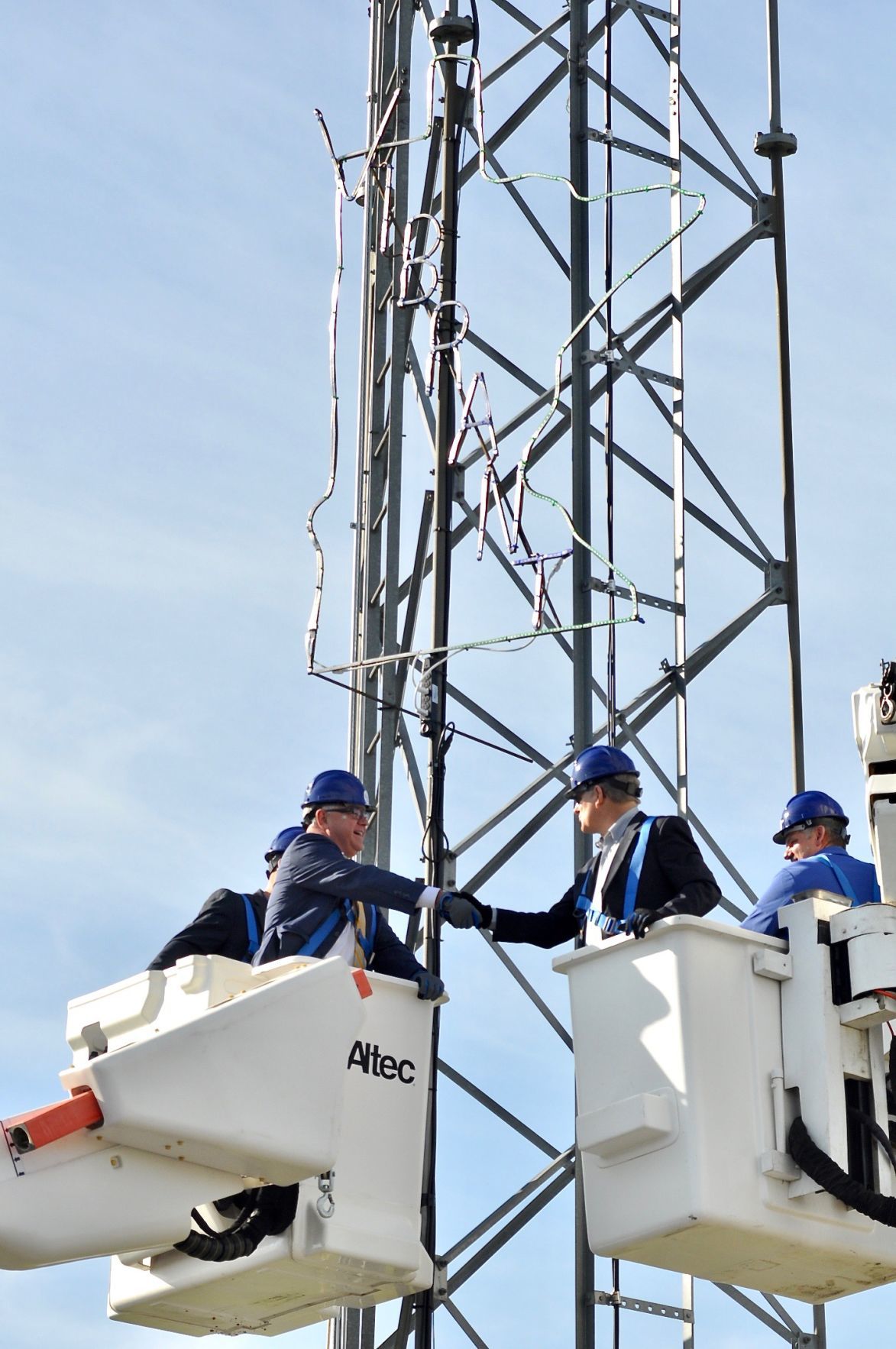 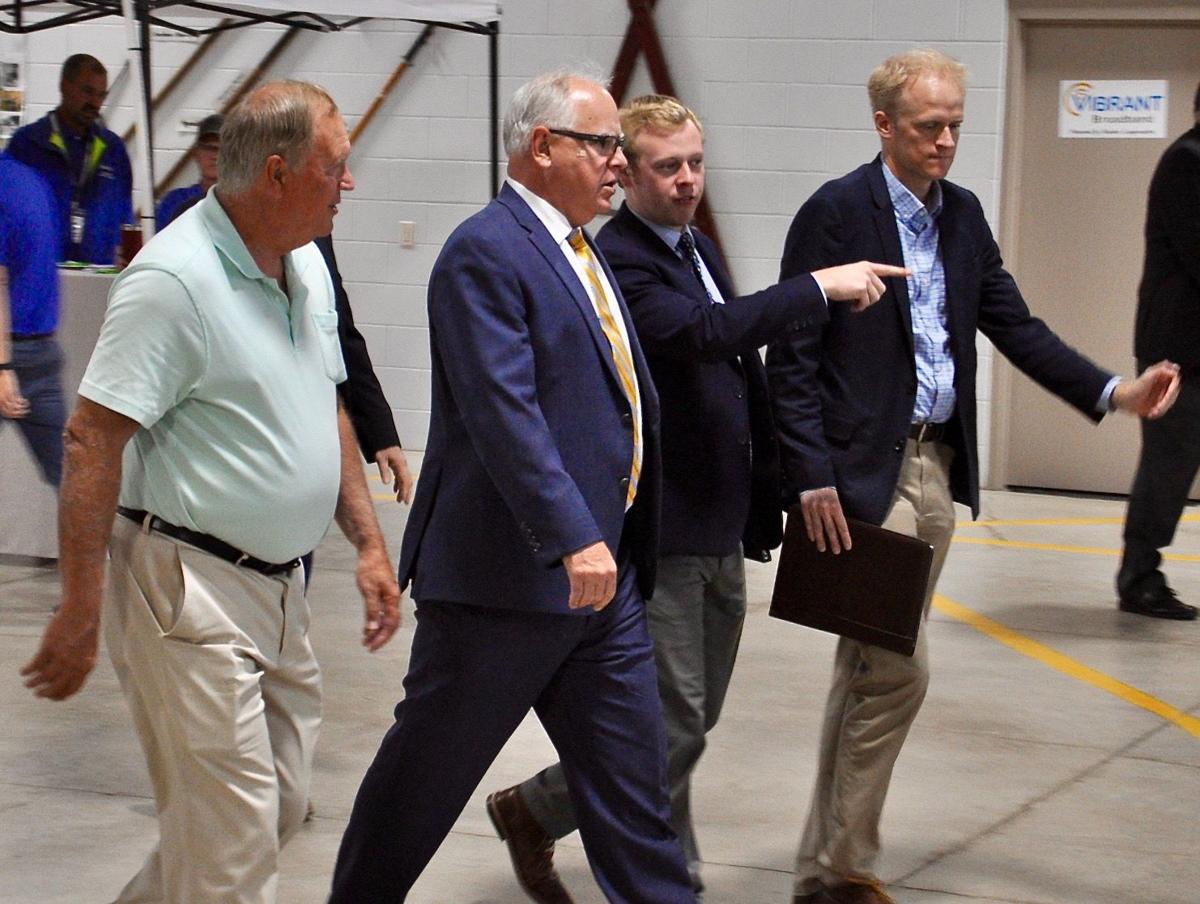 Gov. Tim Walz gestures to the audience after suiting up for the Vibrant Broadband ribbon cutting — an event that took place high in the air outside Meeker Cooperative’s Litchfield headquarters.

Meeker Cooperative CEO Tim Mergen speaks to a crowd of dignitaries, employees and cooperative members during the dedication ceremony for Vibrant Broadband Thursday.

The governor attended a “ribbon cutting” ceremony at the cooperative’s headquarters in Litchfield during which he and other speakers said that internet connectivity today is as important as electricity was 80-some years ago when rural electric cooperatives began supplying that service.

“To the entire board of Meeker Cooperative, you embody what community means,” Walz said. “This harkens back to a time when running that final mile of power line was a big undertaking. There wasn’t an economy of scale that made sense, but what did make sense was the understanding of the economic engine that we could turn loose.”

That theme — that broadband internet’s importance is as important today as electricity was to rural residents decades ago — echoed throughout the dedication ceremony.

Meeker Cooperative CEO Tim Mergen said the cooperative began looking at the broadband project back in 2016, and credited the board of directors for backing it.

“They’re the ones that took the big risk to go ahead and say, ‘yeah, let’s go ahead and move this project forward,’” Mergen said. “They did what the board of directors did 84 years ago when the co-op was formed to bring electricity out to the area we now serve electricity to. it was a great big leap of faith then, it was a leap of faith now.”

“Sort of remarkable how 81 years later those same exact words could be used to describe the need for high speed internet,” Mergen said.

The lack of high-speed internet is an issue in many areas of the state, with some surveys indicating that one in five rural homes lack access to the service.

Meeker Cooperative looked to change that in its service area, which includes Meeker and parts of McLeod, Kandiyohi, Stearns, Wright and Renville counties, when it announced in November that it had begun installing a fiber optic backbone, connecting its 14 substations throughout the county to provide Vibrant Broadband.

Darwin and Dassel were the first towns in the service area to receive the new technology on July 1. Mergen wrote in a column for the Meeker Pioneer — the cooperative’s monthly newsletter — that it would take about two years to complete countywide connections.

But it’s the start that many have been looking for – not just in Meeker County, but throughout the state, and even the nation.

State Rep. Dean Urdahl, in an interview after the dedication, said the Legislature has been working on broadband connectivity for a few years. But Meeker Cooperative’s decision not to wait for the Legislature to lead the way, and to begin building out the internet infrastructure on its own is impressive — but perhaps not all that unusual given the co-op’s history.

“They are pioneers in this type of development,” Urdahl said. “The first all-electric farm in the country was here. This again plays up the forward-thinking people here and people connected with Meeker Co-op.”

Walz took the same congratulatory tone during his remarks Thursday.

Currently, the state and country have “the haves and have nots based on accessibility to broadband,” Walz said. “The state of Minnesota …made a commitment (to get) everybody connected. We are finding creative ways to do this. We’re not going to do it all through state government. It’s going to be private sector investment where it makes sense. It’s going to be cooperatives like Meeker Cooperative finding unique situations. It’s going to be federal government funding.”

Ken Johnson, former administrator of the Rural Utilities Service, who in 2018 approved Meeker Cooperative Light & Power’s plan to build out the fiber optic “backbone” that laid the groundwork for Vibrant Broadband, praised the cooperative’s work – which will benefit both the organization and its members.

“You’re beginning to feel the momentum,” Johnson said. “You are changing your members’ lives the way that electricity did 80-some years ago. As you look back you’ll see how important today was for the future of your members when it comes to connectivity, as well as the health and wellness of the electric co-op.”