McLeod County Sheriff Scott Rehmann is retiring following a stroke he suffered back on Aug. 30.

The announcement was made Tuesday morning in a letter from Rehmann that was published on the McLeod County Sheriff's Office Facebook page. In the letter, Rehmann said his last day was Tuesday, Sept. 22.

"The stroke affected the right side of my body and affects my ability to perform the essential functions of my job, such as holding a firearm, driving a vehicle, and performing the many other basic tasks that are necessary to properly function as a law enforcement officer in the community," Rehmann wrote in his letter. 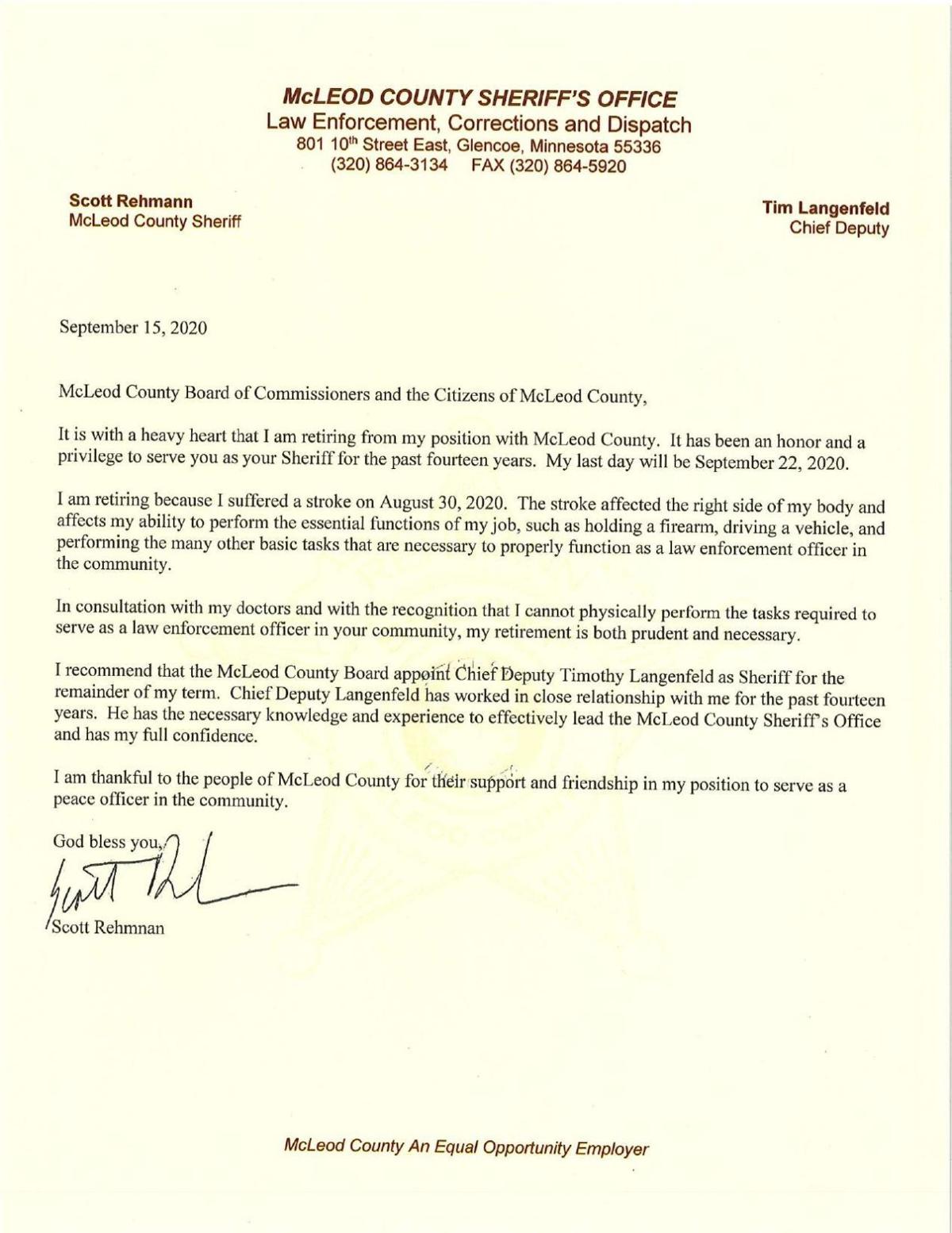 "In consultation with my doctors and with the recognition that I cannot physically perform the tasks required to serve as a law enforcement officer in your community, my retirement is both prudent and necessary."

Rehmann was first elected back in 2006 and sworn into office January 2007. He was most recently re-elected in 2018 and has served 14 years as the county's sheriff.

"On behalf of the County Board, we wish Scott a speedy recovery," McLeod County Board Chair Joe Nagel said Tuesday. "Thank you for your service."

Following Rehmann's retirement, state statute dictates Chief Deputy Timothy Langenfeld will assume the sheriff's duties until further action by the McLeod County Board. However, the title of sheriff is not automatically given to him.

The McLeod County Board may choose to appoint Langenfeld sheriff to fill the last two years of Rehmann's term, or it can accept applications, conduct interviews and appoint a sheriff based on that process. In his letter, Rehmann recommends the board appoint Langenfeld as sheriff for the remainder of the term ending in 2023.

McLeod County Attorney Michael Junge said the county cannot hold a special election to fill the position. The plan will be discussed at the County Board's Oct. 6 meeting.

"In the meantime, nothing will be any different," Langenfeld said. "We're continuing to run as normal as we can. ... That's why we have a chain of command set up."

This story will be updated with more information as it becomes available.