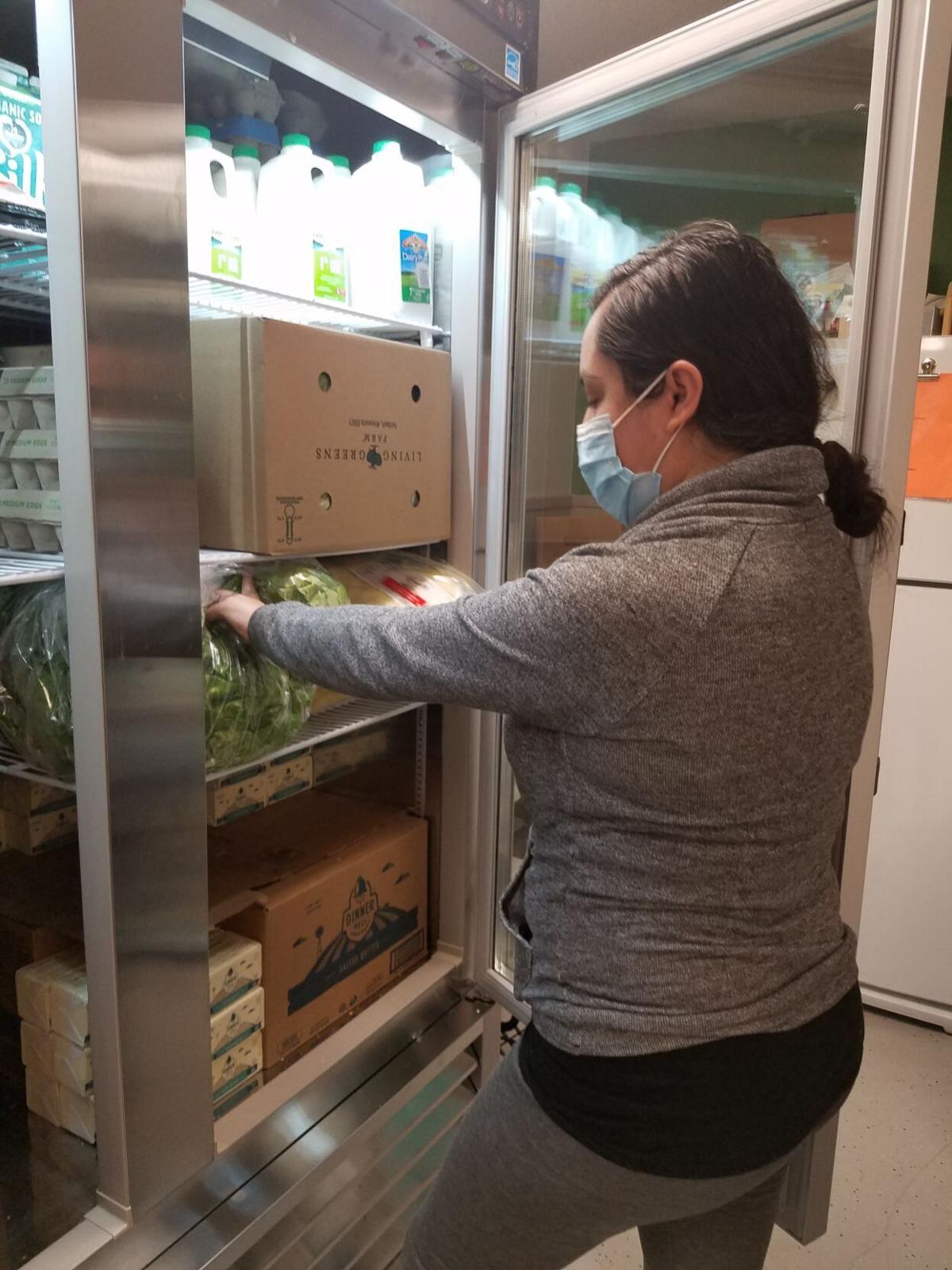 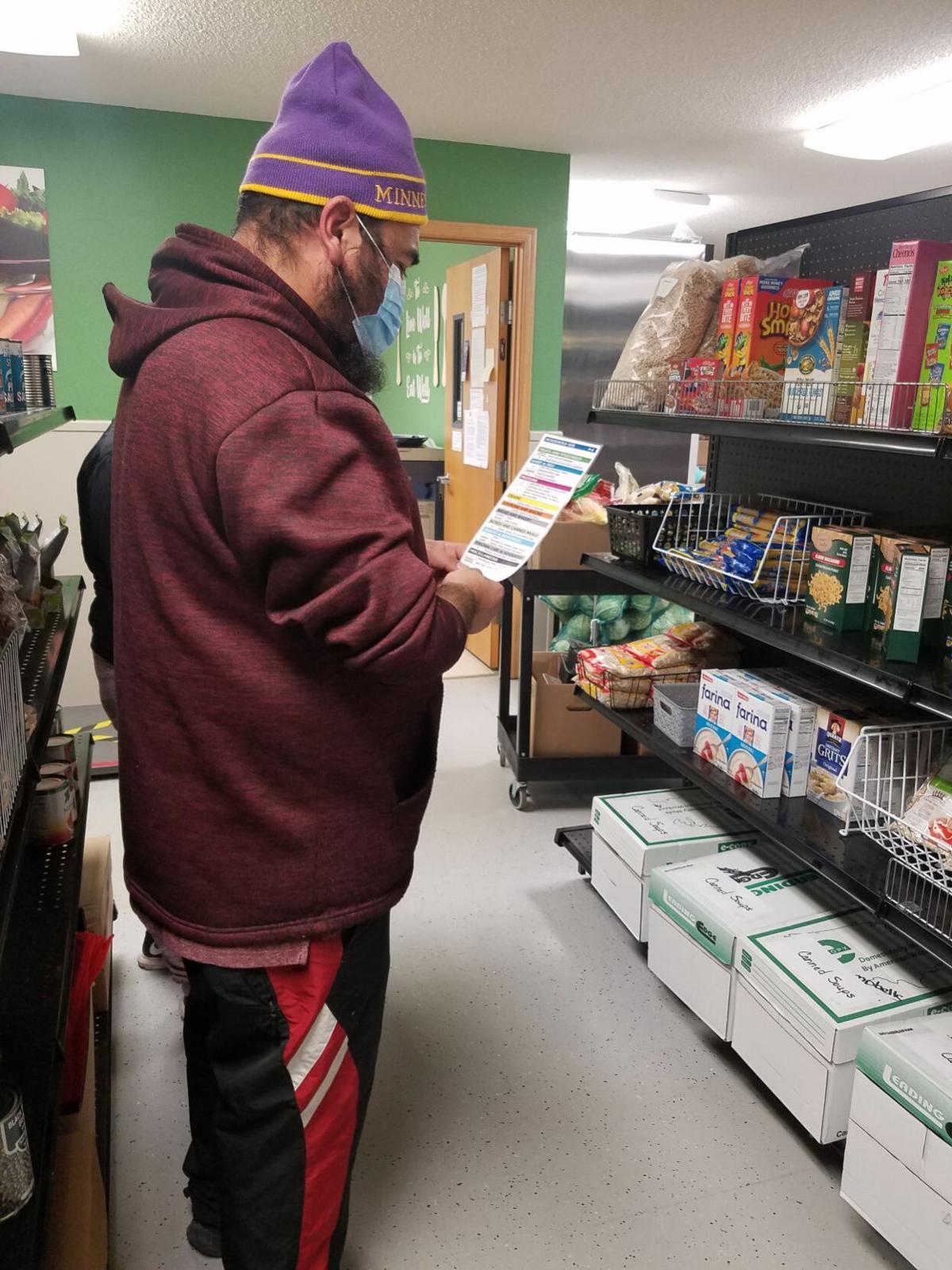 With COVID-19 safety protocols and social distancing in place, clients can visit the McLeod Emergency Food Shelf for a safe shopping experience.

With COVID-19 safety protocols and social distancing in place, clients can visit the McLeod Emergency Food Shelf for a safe shopping experience.

It's Albers' best guess that the restrictions — without the benefit of an additional unemployment package — will fuel greater food insecurity.

Remarkably in this year of uncertainty, the local food shelf has not seen a surge in clients.

"We're quieter than we've been compared to last year," she said. "Without the mobile food shelf, we would actually be 24-25% lower per service in 2020 than 2019. With mobile we've brought that up to about a 9% decrease. That tells us we're definitely meeting needs in the community."

Although the initial stay-at-home order was issued in late March, Albers said the ripple effect of the COVID-19 pandemic on the food shelf wasn't immediate.

"No surge yet," she said. "We're seeing a gradual increase. We've been busier the last couple of weeks than we have been. We're getting there, we're building back up. We went for a very long period of time when our numbers were really low. Mobile is helping to close that gap. People are in a different spot without that stimulus money and extra unemployment money."

Albers said she isn't the only one who keeps expecting a surge in business. Clients — especially those who hadn't been at the food shelf in a while —thought they would be busier, too.

While overall usage of the food shelf is down, Albers said there has been an increase in usage by older clients.

One thing that hasn't changed is the support of donors. They haven't forgotten about the food shelf. People continue to make donations including the giving of their stimulus checks, and donations of food or money are still being welcomed.

"What donors were hearing is there was such a need, such a demand," she said. "I truly believe our time is coming. This money is very useful. We put it in the bank and we'll use it to pay our rent and buy food. We don't know what's going to happen the rest of the year or how it will affect our donor base."

In addition to donor support, the food shelf has received COVID relief money, which was used to purchase the mobile bus and start up the program. They also received some county funds, which were earmarked for rent and utilities. Another chunk of COVID money was used to hire a second person for the mobile program, so there are now two people working with it.

The McLeod Emergency Food Shelf launched its mobile program in August with eight stops in six county towns. So far, Albers said it has been well received.

"We've learned a few things," she said. "We did alter the schedule by changing two stops along the way and altering the distribution times. We are still going to the six cities and we have eight stops, but now it's Monday through Thursday rather than Monday through Friday. We bundled Brownton and Stewart into one day. We have one stop in Brownton and one stop in Silver Lake, and we adjusted the times. We may add an additional site on the open Friday twice a month."

For the winter months, the food shelf is following a preorder program for mobile clients. This means folks can get an order form at the bus in November, fill it out and drop it off by a specific date and food shelf volunteers will pack their groceries and deliver them in December.

"We'll be going to those same stops and folks can pick up their groceries," Albers said. "Plus, we'll have emergency boxes on hand for those who didn't know they had to pre-register. We also have an order form online. It's definitely a work in progress. If people go to our website (mcleodemergencyfoodshelf.org), go to the mobile outreach tab and at the bottom of the page there is a link to complete the order form. If they have any questions, call me or the dedicated mobile outreach line."

Although the surge hasn't materialized, Albers said they are always anticipating greater need.

"We're trying to prepare for whatever is happening or going to happen," she said. "We focus on keeping ourselves in good health, so we can do what we need to do. It's interesting when you talk about disaster preparedness ... We have ideas and plans. If we had to go down to one site, that's the beauty of having two sites and mobile. We have options. We're very aware of where we are and who is there. We are keeping the sites and staff separate, so we can keep doing what we're doing."

The McLeod Emergency Food Shelf has sites in Glencoe and Hutchinson, as well as its mobile program that visits other county communities. Each location has its own schedule.