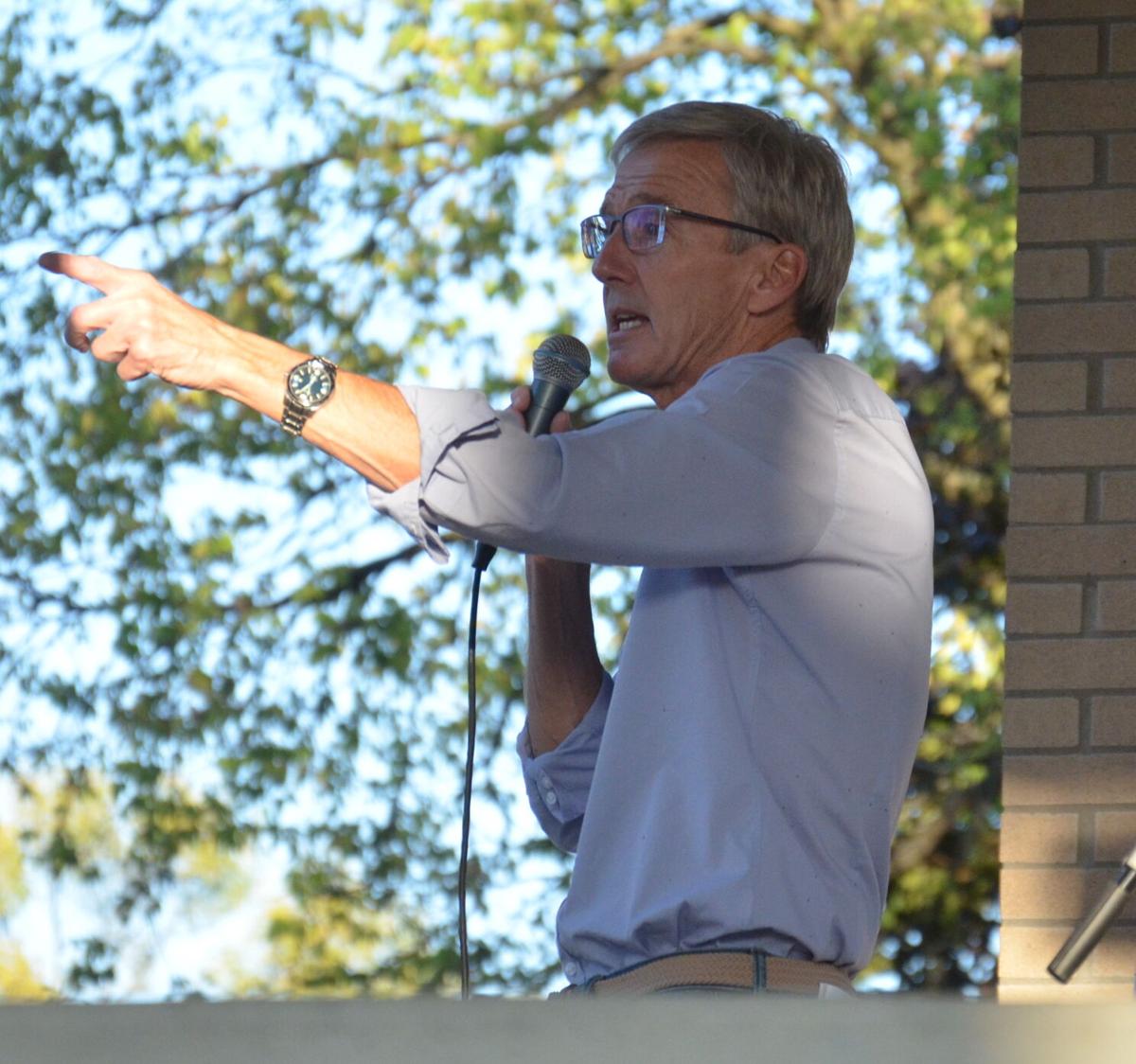 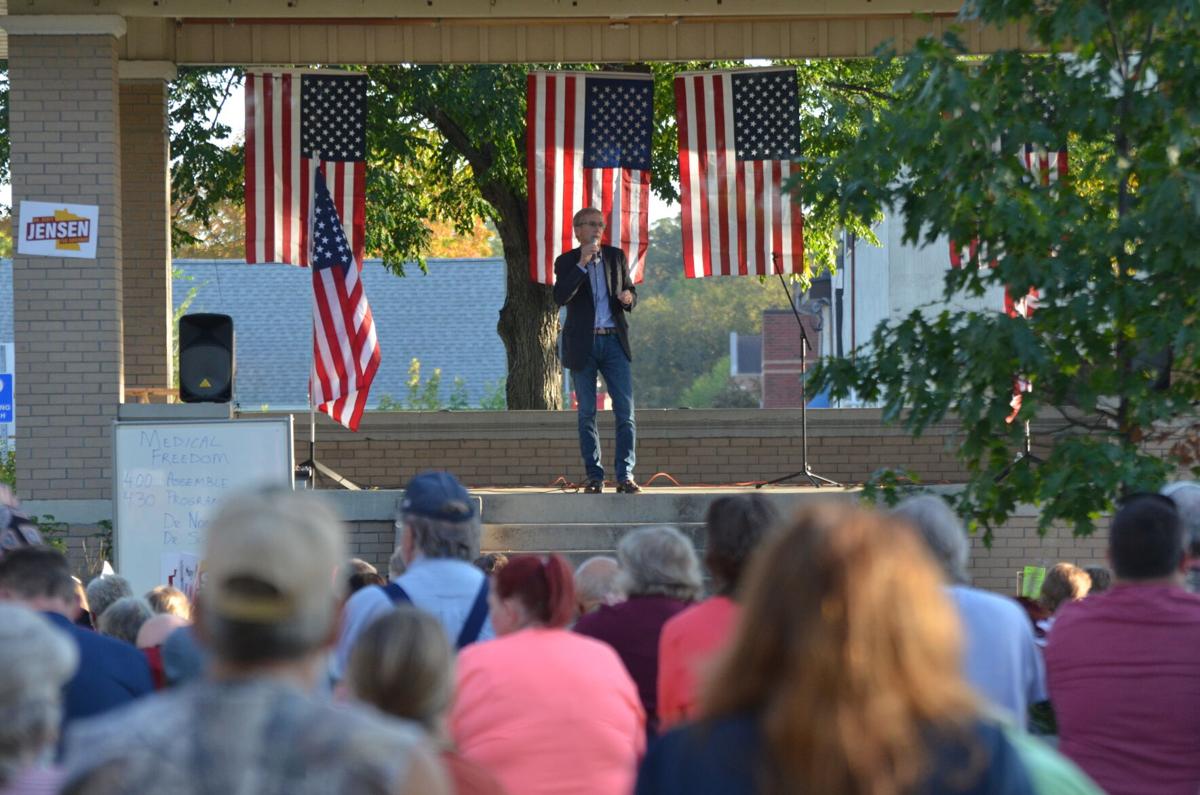 Dr. Scott Jensen speaks to a crowd about “health freedom” and other issues of importance to his candidacy. He says some medical health professionals have let the spotlight of the pandemic go to their heads, but he is also using his new-found fame to mount a run for governor.

Dr. Scott Jensen speaks to a crowd about “health freedom” and other issues of importance to his candidacy. He says some medical health professionals have let the spotlight of the pandemic go to their heads, but he is also using his new-found fame to mount a run for governor.

“I don’t care if you’ve got MD behind your name or whatever letters you have behind your name, people like to be reached out to and thought of as an expert, and I think we’re seeing some of that,” said Jensen, a Minnesota gubernatorial candidate who sat down with Leader reporters last week for an interview. He was in Hutchinson speaking at a rally opposing vaccine mandates.

Jensen’s criticism was aimed at people such as Dr. Michael Osterholm, director of the Center for Infectious Disease Research and Policy at the University of Minnesota, and Dr. Anthony Fauci, director of the National Institute of Allergy and Infectious Diseases and chief medical advisor to the president of the United States. Jensen accused both men of basking in the national recognition they had received as the country was enveloped in the COVID-19 pandemic.

“We see those bureaucrats almost thrilled to the occasion of, ‘Gee, I’ve never been so important. I must really be something.’ People like that,” Jensen said.

But like Osterholm and Fauci, Jensen was a little-known figure until the pandemic. A one-term state senator out of Chaska and the 2016 Minnesota Family Physician of the Year, Jensen had no thoughts of running for governor when he announced in July 2019 that he would not seek a second term in the Legislature. But as the pandemic hit, and as conservatives bristled at mandates and lockdown orders, Jensen’s voice of opposition became fodder.

His videos and criticisms of how the pandemic was being handled quickly caught fire on social media. Soon he was invited to appear on a primetime cable show on Fox News, and his comments were being widely publicized across the country. He had never been in so much demand, and as his profile grew, he heard his calling.

Jensen is sharp with his criticisms of Gov. Tim Walz’s handling of the pandemic, saying he used a “one-size-fits-all” approach by treating all Minnesota counties the same regardless of their size. He also said the governor surrounded himself with people wanting to please him rather than be skeptical of his decisions. But he also had some sympathy.

“This was uncharted territory,” Jensen said. “Gov. Walz was thrown into a hellacious situation, and I think he woke up in the morning trying to make good decisions. And I think Minnesota was with him for at least the first several weeks.”

Jensen’s skepticism of COVID-19 deaths and the COVID vaccine have made him a heel to some as much as they have made him a hero to others. His claim that doctors and hospitals had a financial incentive to inflate the numbers of deaths fueled online conspiracy theories and led to an investigation by the Minnesota Board of Medical Practice, which was eventually dismissed. But Jensen argues much of the criticisms against him aren’t true.

“I’m not interested in being associated with people who say that the Earth is flat, or that there is no virus, or that COVID is not real,” he said. “I get disgusted when people call me an anti-vaxxer, because they’re frankly being stupid and untruthful. I spend $100,000 a year buying vaccines for my patients.”

When asked why he is the right candidate to run against Walz as opposed to other Republican candidates such as his former colleagues Sen. Michelle Benson and Sen. Paul Gazelka, Jensen called himself a “maverick” who can work across the aisle.

“I’ve been willing to have conversations,” he said.

But while his opinions have made him an outsider to some of the medical community, a look on his website drscottjensen.com shows a list of priority issues typical of Republican candidates. He wants to address public safety and “Minnesota’s crime epidemic.” He favors a strong second amendment and “secure elections.” He also says the “public school system is broken” and that “school choice is going to be a big part of that,” referring to school vouchers.

And while he champions “medical freedom,” he explicitly says that should not include abortion rights for women.

“To me, the fertilized, growing, in-utero baby has the rights to my body, my choice also,” Jensen said.

Winning a Minnesota statewide election has been difficult for Republicans in the past 20 years. Gov. Tim Pawlenty won in 2002 and was re-elected in 2006, while Sen. Norm Coleman and Secretary of State Mary Kiffmeyer won in 2002. But that’s it.

Jensen says Republicans have an image problem. Too many people see them “as a caucasian party interested in the status quo with no desire for any government, or any government beyond what is absolutely necessary.” He says more needs to be done to bring in groups of people who are not traditionally considered conservatives.

“At some level, we’re all immigrants, or at least our ancestors are. I think we’ve done a poor job of respecting the concerns of women, especially, I think, in the metropolitan areas,” Jensen said about Republicans. “I don’t think we’ve done a good job of going out and having conversations with multicultural groups and saying, ‘What would you want?’ … I think we preach at people rather than converse with them. I don’t know that we’ve had a really strong effort to say to Millennials and the Gen Zs, ‘Hey, I don’t have the answers. Can you help us do some problem-solving?’”

If any Republican can bring those groups together under government, Jensen believes he is the one who can do it. He calls himself “foolishly” candid, but “willing to roll the dice” in doing so because whether he wins the gubernatorial election or doesn’t even make it out of the GOP primary, he won’t let this candidacy change him.

“My life doesn’t change much either way in terms of how I live inside my head based on this governor’s race,” he said. “I got the best job in the world right now, I’m a family doc.”