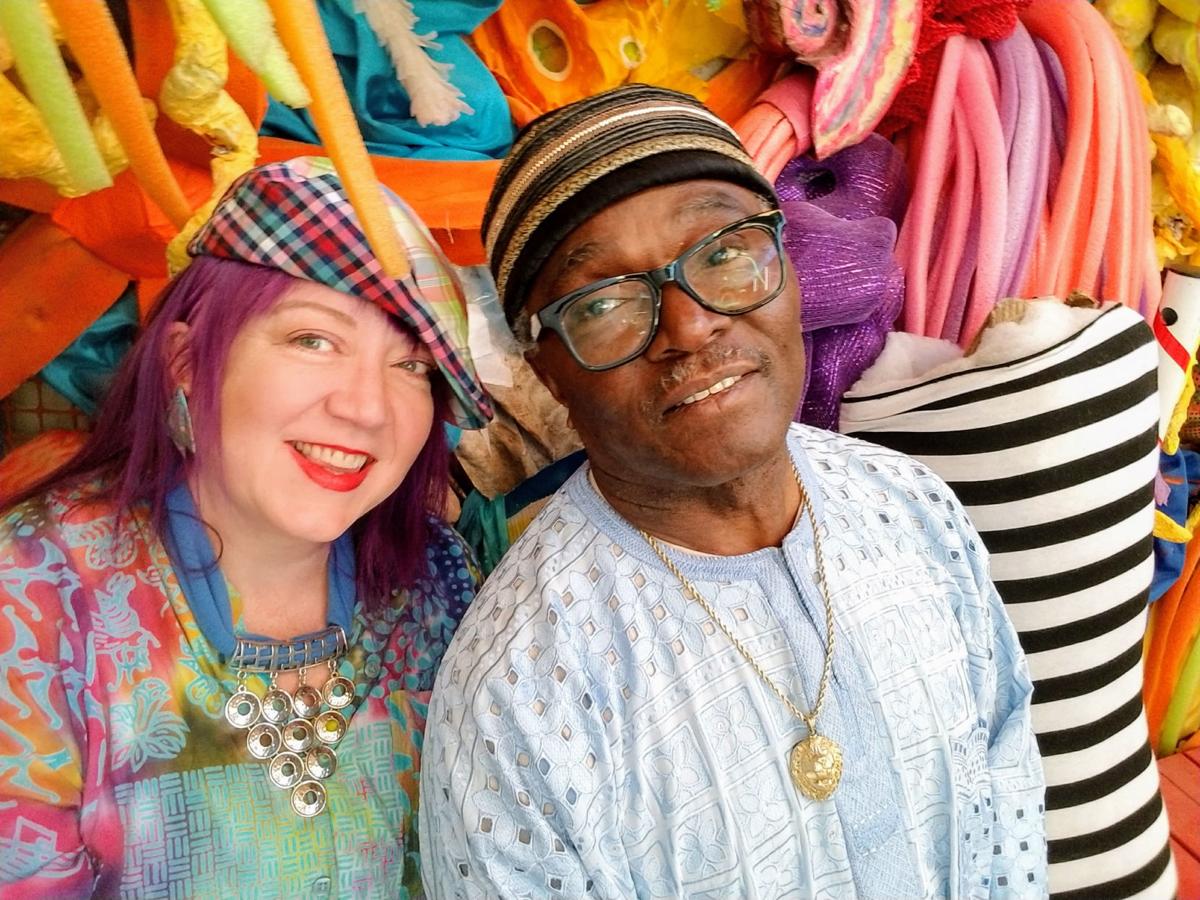 Papa Siama and Auntie Dallas are sharing their love of happy African music at 10 a.m. Thursday at Library Square. Admission is free and the public is welcome. Bring a lawn chair and enjoy. 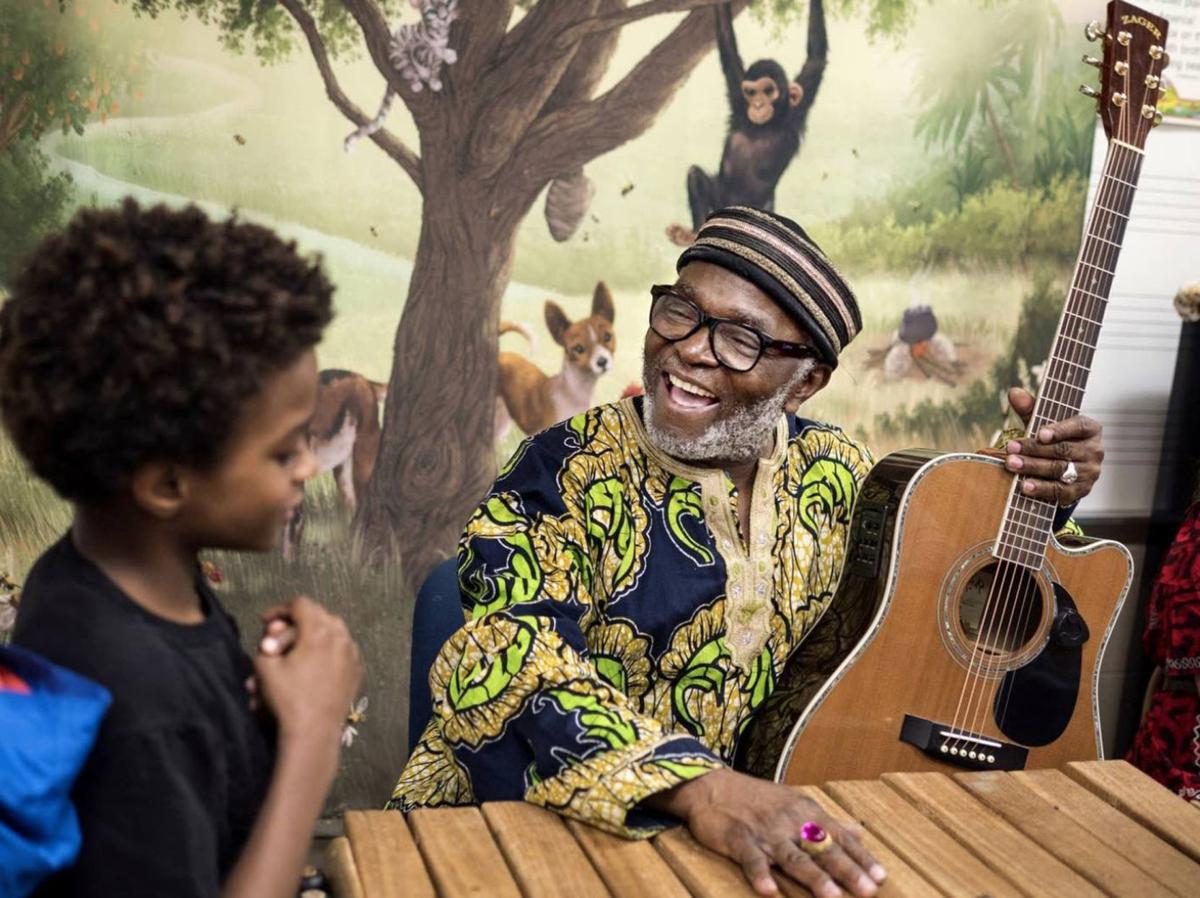 Musician Siama Matuzungidi visits with a young fan. The couple play at more than 300 concerts and children’s program a year. In addition to performing in Minnesota and the midwest, they have also entertained audiences in New York City; Nashville, Tennessee; Birmingham, Alabama; and New Orleans, Louisiana. 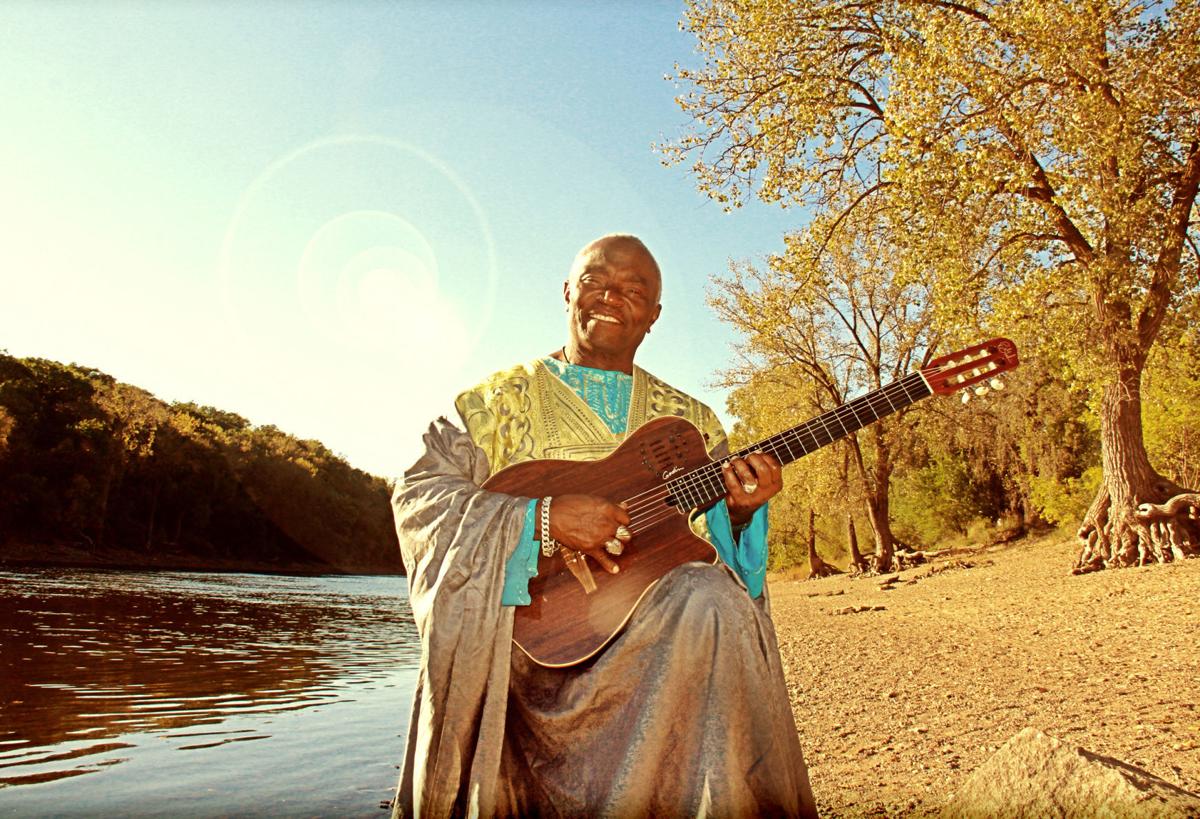 In 2016, Siama Matuzungidi released the critically acclaimed album “RIVERS from the Congo to the Mississippi.” Here he stands by the Mississippi River.

Papa Siama and Auntie Dallas are sharing their love of happy African music at 10 a.m. Thursday at Library Square. Admission is free and the public is welcome. Bring a lawn chair and enjoy.

Musician Siama Matuzungidi visits with a young fan. The couple play at more than 300 concerts and children’s program a year. In addition to performing in Minnesota and the midwest, they have also entertained audiences in New York City; Nashville, Tennessee; Birmingham, Alabama; and New Orleans, Louisiana.

In 2016, Siama Matuzungidi released the critically acclaimed album “RIVERS from the Congo to the Mississippi.” Here he stands by the Mississippi River.

Children of all ages are welcome to experience the joy of Congolese music with Papa Siama and Auntie Dallas. The duo will share their love of happy African music at 10 a.m. Thursday at Library Square.

“Our show in a couple of words is African stories and singing,” said Dallas Johnson. “It’s designed especially for kids.”

Lori Ortega, executive director of Pioneerland Library System, selected the couple to perform at system libraries this summer. It was the cultural aspect of their program — introducing Congolese culture and music — that was appealing.

“They are very well known in Minnesota,” Ortega said of the musicians. “It should be a very good program and a very different cultural experience. I think it’s going to be fun and I hope we get good crowds. Their reviews are super good. We’re always looking for interactive programs for kids so they can get up, dance and jump around.”

“To have somebody of this quality is exciting,” Lund said. “I’ve talked with several people who have seen them in the Twin Cities. Everyone says they are so good.”

Siama Matuzungidi and Johnson, who are partners in life and music, started performing interactive children’s programs in 2015.

They credit their change in direction — from dance bands to children’s programming — to a small girl who grabbed a shaker out of their basket and started singing and dancing. The girl’s mom invited the duo to perform for children at Midtown Global Market in South Minneapolis. The program was a hit, so Matuzungidi and Johnson began performing in libraries and at special events.

In 2017, they were awarded a Next Step Grant by the Metropolitan Regional Arts Council to create a children’s album. “The Land of Yangalele,” which features original songs with African rhythms, was awarded a Parents’ Choice Award in 2018.

The couple teach in elementary schools as part of Classical Minnesota Public Radio’s Classic Notes Artists program. They are also on the roster of the COMPAS arts education program and Funtime Funktions.

The serendipitous actions of the little girl sent the couple in a whole new direction.

“We were musicians all of our lives,” Johnson said. “Now 90 percent of what we do is kids stuff. It’s phenomenal.”

What sets this program apart from others is that Matuzungidi is a superstar in his home country of the Democratic Republic of the Congo. The composer, songwriter and performer grew up in the western region of Congo. He started playing guitar when he was 12 — against his father’s wishes. He learned to play the instrument by listening to the radio.

No one took the young musician’s dreams seriously, but being in the right place at the right time can change lives, which is what happened.

“Matuzungidi was so lucky,” Johnson said. “He was living in a neighborhood with people with money. The neighbors were famous musicians. With their help, he got to join one of the biggest bands in the country. He’s a lucky guy. He also immediately hooked up with a boy band that was touring and really popular. He started at the top.”

The musician became a well-known soukous artist. Soukous is a genre of dance music known as “the sound of happiness.” From the 1970s to the early 1990s, he recorded hundreds of songs and toured the world with many soukous bands earning the moniker “Soukous Legend.”

Matuzungidi moved to Minneapolis from New York City in 1996. He discovered quickly there wasn’t much demand for soukous musicians. To earn a living, he expanded his repertoire to include reggae, calypso and soca bands. It was a tough transition going from big-time musician to club player.

Matuzungidi and Johnson met when they played in the same band. They started out as friends and later became sweethearts.

“He was playing music in a lot of different bands and not succeeding monetarily,” she said. “I was working a corporate job I hated. We went on like that for years.”

They might have continued that lifestyle if she hadn’t encouraged him to apply for a McKnight Fellowship. At first, he wasn’t in favor of it, thinking it was for other musicians. It wasn’t until she started researching him online and pulling together his story that she realized what a big deal he was.

“He had given up on that life,” she said. “He had spent 18 years in the states struggling day to day. He gave up on his past.”

Things changed for them in 2014 when he was awarded a McKnight Fellowship for Performing Musicians. The $25,000 grant was the vote of confidence he needed to begin a solo career.

“McKnight made him realize he had something special to offer and people cared,” Johnson said. “Instead of playing dance bands, he could play acoustic (guitar) and do different material, not just party music. He could be his own artist instead of the side guy.”

The fellowship also offered them an opportunity to learn about the music business.

“All we knew about professional music was singing in clubs,” Johnson said. “When we first got the fellowship, I was contacting clubs. ‘Does he want to play here for free or $50?’ It was so humbling and awkward. I started meeting with people who booked better places. They gave us an education. We learned about big theaters. One of the things we learned was to make music engaging. You can’t just perform on stage. They want you to be interactive. You have to have a story. You have to make the songs part of the stories. Through those people, we started building our network.”

The couple credited their children’s programming for teaching them to be intuitive and adaptive.

“They (kids) have a short attention span,” Johnson said. “Every show is different. It made our grown-up concerts more engaging. I’m not shy about everybody singing along. Our adult shows are similar to our kids shows. We want everyone to feel like you’re in Africa, under the stars. We’re enjoying being alive and being together. It’s happy.”

Papa Siama and Auntie Dallas are performing Congolese music at libraries throughout the Pioneerland Library System. The duo is performing at 10 a.m. Thursday, June 13, at Library Square in downtown Hutchinson. This is the kick-off event for Stories in the Park. Admission is free and the public is welcome. The rain location is the Hutchinson Event Center, 1005 State Highway 15 S. For more information, call Sherry Lund, children's librarian, at 320-587-2368.

Future performance dates in the area for Papa Sama and Auntie Dallas are:

For more information about the performers, visit siamamusic.com.

"Our show in a couple of words is African stories and singing. It's designed especially for kids."