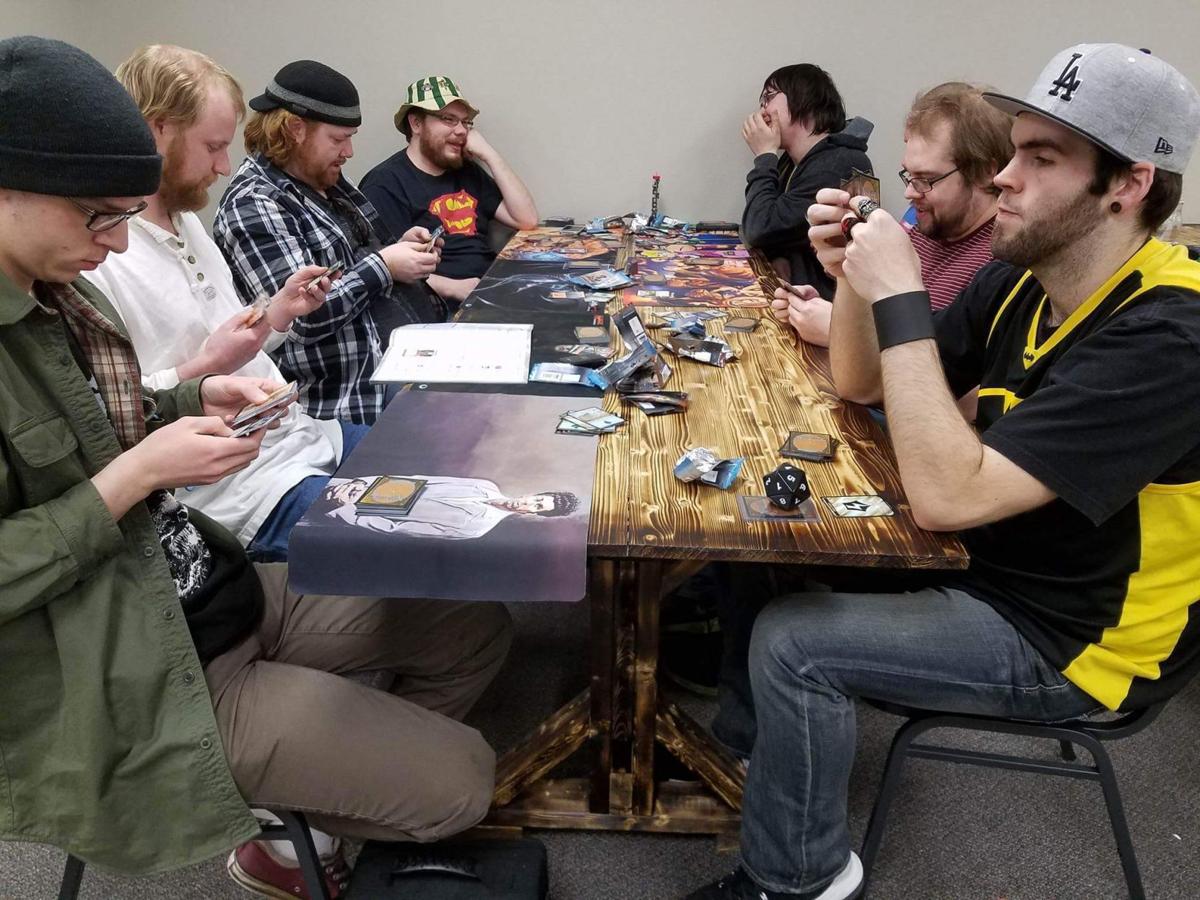 A key component of business at Sanctuary Games is providing space for customers and guests to play games together and build a community. 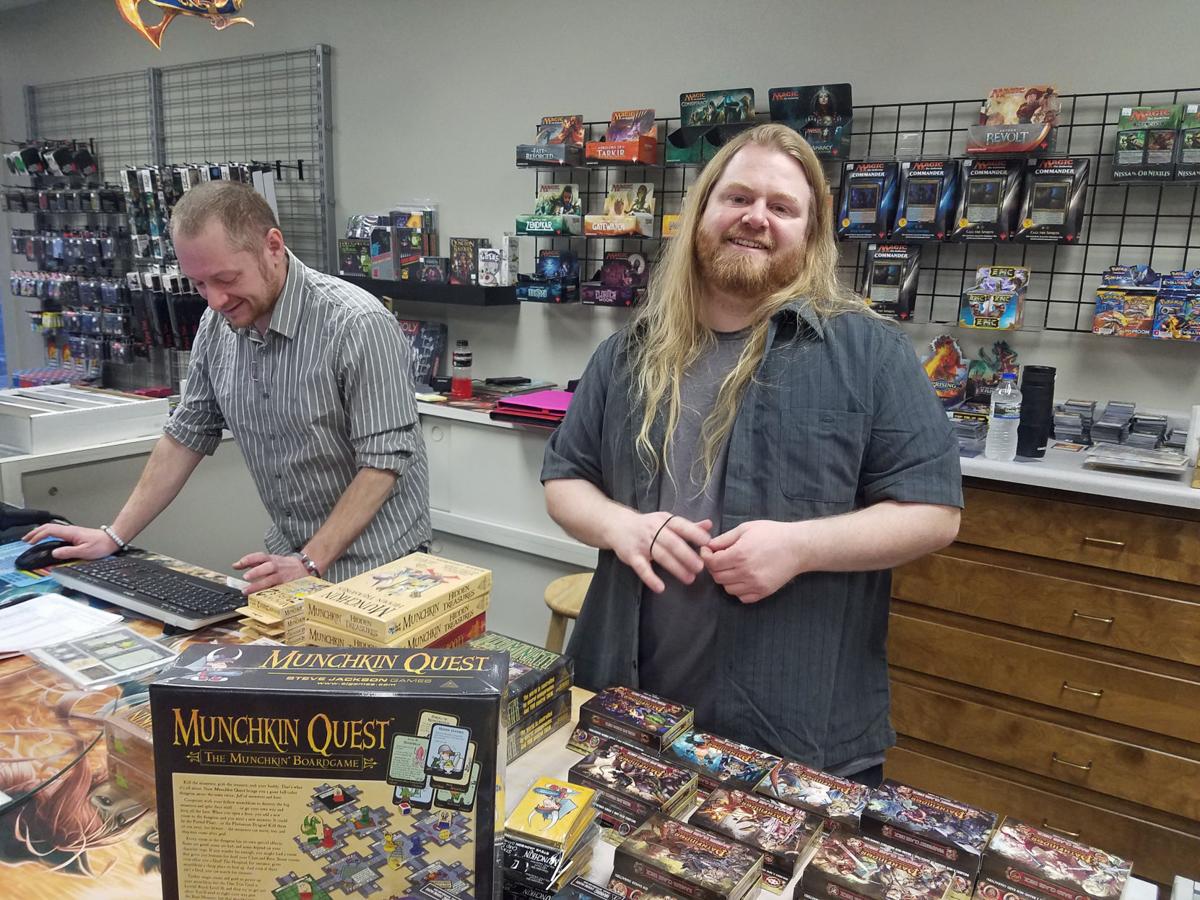 Thomas Gauvain and one of his employees, Christopher Welker, sorted through inventory at Sanctuary Games Tuesday evening. They’re in the process of adding shelf space for products and building more tables for customers to play at. Gauvain plans to add classics such as Monopoly and Risk to his inventory of games such as Magic and Munchkin. 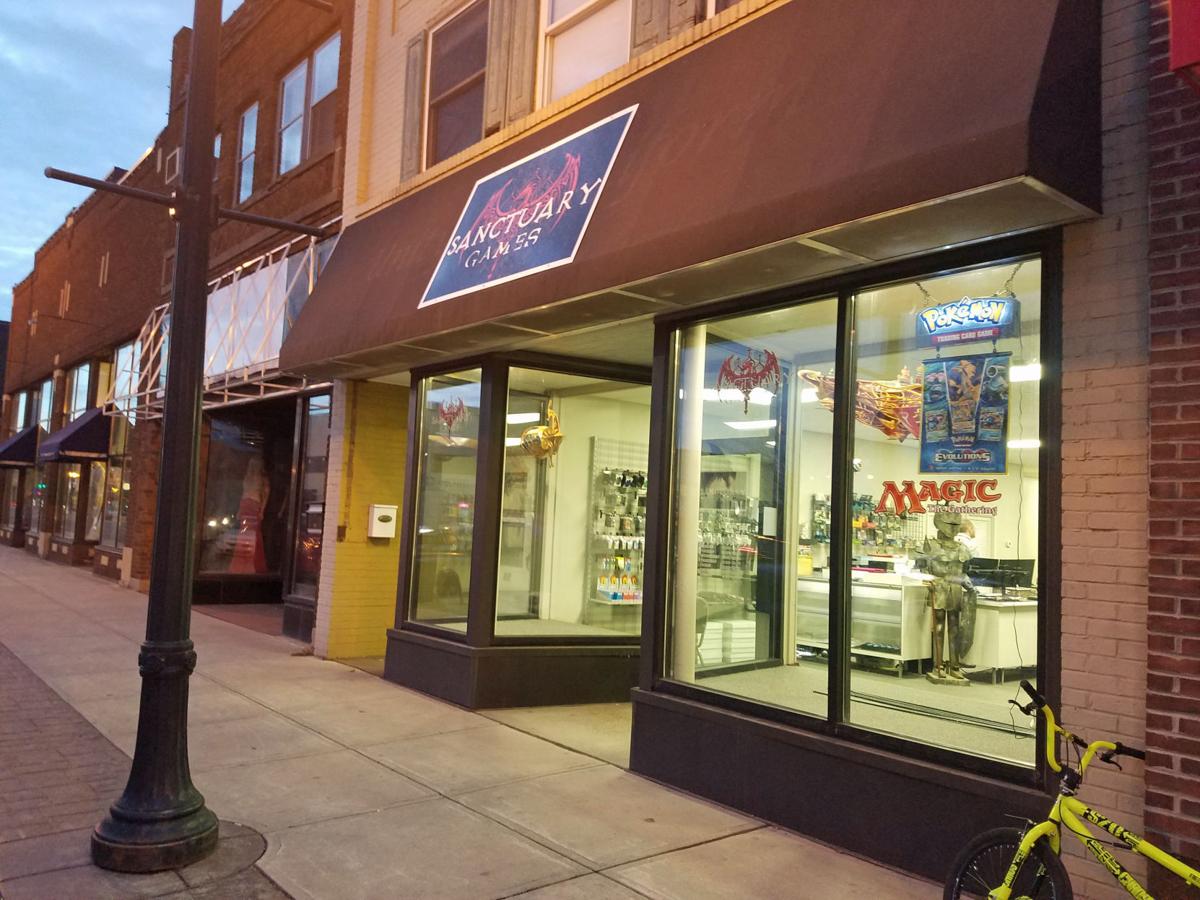 A key component of business at Sanctuary Games is providing space for customers and guests to play games together and build a community.

Thomas Gauvain and one of his employees, Christopher Welker, sorted through inventory at Sanctuary Games Tuesday evening. They’re in the process of adding shelf space for products and building more tables for customers to play at. Gauvain plans to add classics such as Monopoly and Risk to his inventory of games such as Magic and Munchkin.

“Community is everything,” he said Tuesday evening as tables started to fill up with Hutchinson residents looking to play card games or hang out while others checked out the growing inventory of games.

“I’m focusing first on some of the specific and exotic games,” Gauvain said. “I will be carrying all the traditional games like Risk and Axis and Allies and Monopoly and those kinds of games very soon as well.”

The doors of Sanctuary Games first opened on Feb. 9, and business picked up faster than Gauvain thought it would.

“My first day I had 60 people in here,” he said. “... Last Saturday I had so many people come in the door that there was standing room only, and half of them had to leave because there was no place to sit down. I’m doubling the amount of tables I have before this weekend so I don’t run into that situation again.”

Gauvain originally planned to use the back room for a computer repair service, but he said gaming business picked up so fast that the demand quickly called for that space. He may still use another space for computer repair.

In addition to browsing the growing inventory of games, cards and accessories, visitors are welcome to sit down and play games with friends or meet new people. On Tuesday evening, Gauvain and his staff were still taking in new inventory, putting up shelves and stocking them. He works with his nephew, Jerome Gauvain, who owns a part of the business, and employs two part-time staff.

Tournaments are scheduled regularly at Sanctuary Games, so far most frequently for Magic: The Gathering, a competitive fantasy-themed card game. Gauvain said he intends to offer rare cards — ranging in value from $80 to $200 — as prizes for winners.

Getting people in the door, bringing people from Hutchinson and the surrounding area together, and introducing groups of people to each other is vital to the business.

“Community is important to every aspect of it,” Gauvain said. “To be frank, that’s what drives sales. People are here enjoying themselves, meeting new people and leaving with a general feeling of happiness. So they are excited to play games. They have a place to play them and people to play them with.”

Gauvain, who is a Watertown resident, said that as a fan of tabletop games himself, he met and knew many people in central Minnesota who enjoyed the hobby, but separated into numerous small groups, even within their own communities.

“They were traveling 45 minutes to an hour to go to a location where they can game,” he said. “The age group from teenage to 40 have grown up with gaming as part of their lives and there is nothing out this way, no place for them to meet and hang out.”

Taran Sorenson, a Hutchinson resident, said he has been to Sanctuary Games six or seven times since it opened.

“My friends all play so I came along,” he said. “It’s a comfortable and welcoming environment.”

Sorenson was there Tuesday evening with Samantha Hoffmann, a student at Ridgewater College.

Sorenson said a new place to hang out is welcome, as there is a shortage of casual places to spend time as a young adult.

“Not everyone likes going to bars. I know I don’t,” Gauvain said.

Most of the games focus on aspects of strategy, critical thinking and creativity with a leaning toward the fantasy and science fiction genres. Because some of the games have been around for years, many have numerous ways to play.

“There are people who have played Magic for years in (Hutchinson) who have never met each other,” Gauvain said.

One format the game is played in, called Commander, centers around specific card dubbed the commander. The cards that can be played are based on the commander card.

“There were a lot of people in small groups that played Commander. They thought the format was dead,” Gauvain said. “They now have met many people who play that. They had no place to come together. People are meeting each other for the first time.”

GETTING INTO THE HOBBY

Gauvain, 40, first got into gaming on the computer.

“I grew up in the backwoods of Alaska,” he said. “We were in a cabin with no electricity and no running water. Our nearest neighbor was 7 miles away. We basically lived off the land until I was 9 years old.”

His family moved to Fairbanks, Alaska, when he was 10, and his mom purchased a Tandy 386 computer.

“I was fascinated with it,” he said. “The first game was called Moria, and it was an adventure game. It didn’t have any graphics. It was just the map with a bunch of Ts to make a land shape and you’d have a G that moved around on the screen, that was like a giant, and your character was an exclamation point, and you’d walk around and read text.”

That interest led him to pick up every book he could on computers to learn how they worked. That allowed him to tweak the system settings so games would run faster.

“Back then … they were not power houses,” Gauvain said.

He was introduced to the Magic card game in the late 1990s while working at a coffee house in Anchorage.

“I got very consumed by that game,” he said. “It’s a great game, very complex, and the complexity was appealing to me. I like to figure out puzzles and stuff.”

When he was 20, he started his first computer repair business, High Tech Computers, in Anchorage.

“Sometimes I’m still here until one in the morning,” Gauvain said. “People are still finishing games and I have inventory or accounting so I do my work and let them finish.”