As they did three prior times, an overwhelming majority of Hutchinson residents said in a National Citizen Survey that their overall quality of life here is good.

Ninety percent of the 540 survey results returned this past summer rated Hutchinson as a good or excellent place to live. That's a 6 percent jump from the 2015 survey.

Complete results were presented to the City Council Oct. 8 by city administrator Matt Jaunich. They're also available online at tinyurl.com/yan59uwq.

The survey is designed to measure residents’ perceptions of their city and city operations. It had a margin of error of plus or minus 4 percent.

"There's no bad results. It's really intended to educate the council and staff," Jaunich said. "These results offer insights into residents' perspectives about the community as a whole."

The 540 completed surveys returned equals 32 percent of the 1,700 randomly sent out to residents. In addition, 129 opt-in online surveys were received and analyzed in a separate report.

Once again this year, survey respondents identified safety and economy as the top priorities the city should address in the coming years. The other six facets of a liveable community also received positive responses.

In his presentation to the council, Jaunich stressed four main points to take from the survey results.

"Hutchinson continues to be a desirable place to live, with safety as a feature that contributes to quality of life," he said. "Resident responses identified safety and the economy as main focus areas — same as in 2015. ... Residents are generally pleased with mobility but support improvements to city streets. ... Overall, ratings in Hutchinson for 2019 generally remained stable." 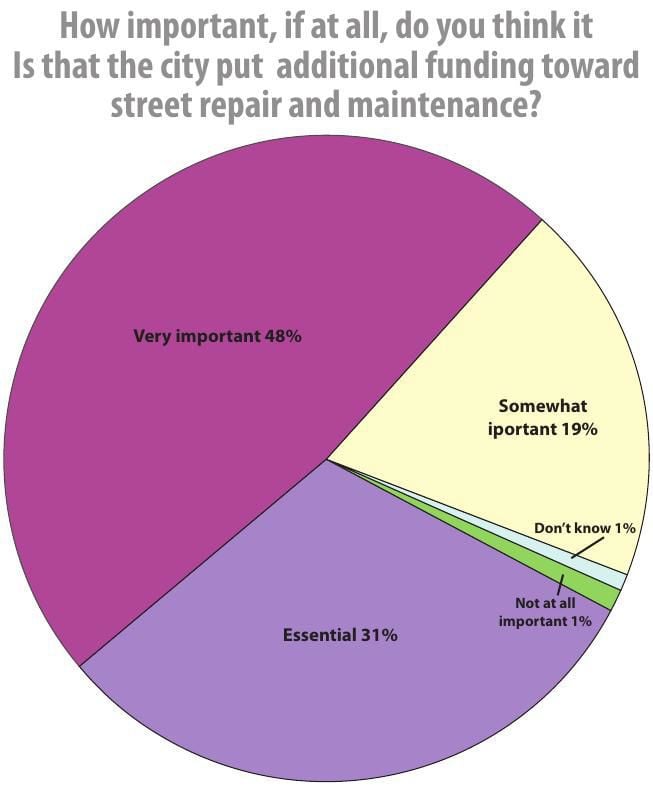 Regarding city streets, respondents answered two customized questions as part of the survey. The first question asked residents to rate the importance of funding street repair and maintenance. About 8 in 10 residents reported this was essential or very important to them. About 2 in 10 respondents felt it was somewhat important, and only 1 percent of residents indicated it was not at all important.

In a second question, respondents were told the city currently spends about $4 million per year on street repairs and maintenance. Then they were asked whether they supported or opposed a property tax increase to fund more fixing, repairing and upgrading city streets. They were given three options:

Those questions are related to the government pillar, where street repair received 26 percent positive responses, a 6 percent drop from 2015. The rest of the governance facets saw higher positive ratings all the way around from four years ago.

Seventy-eight percent rated the overall quality of city services as good for excellent, an increase of 8 percent from 2015. At least 8 in 10 residents gave a positive rating for public services such as fire services (94 percent), city parks (88), yard waste pickup (88), power utility (89), sewer services (89) and leaf control (87). 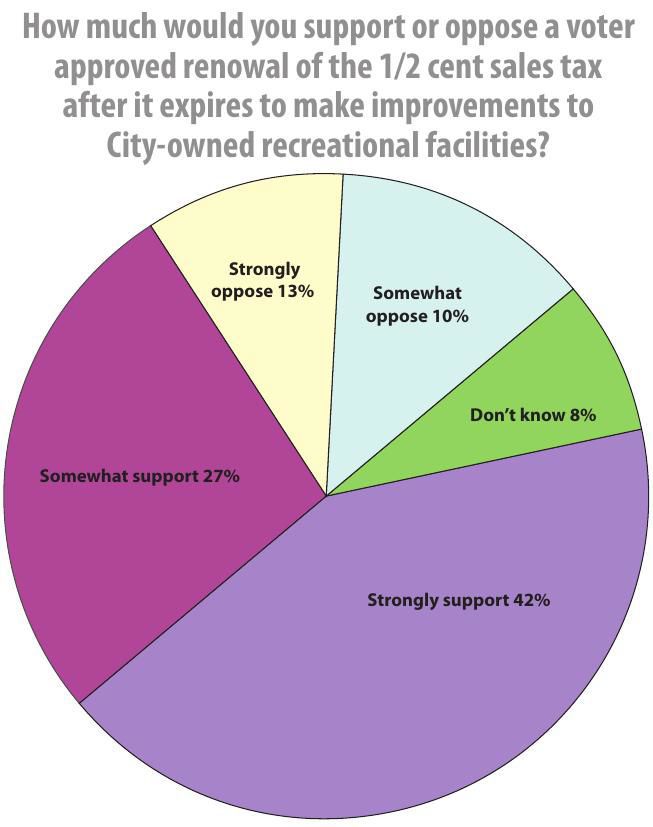 A third custom question in the survey also fell under the recreation facet of governance. It asked if the city's 1/2 cent sales tax, which generates about $1.3 million a year, should be renewed after it expires in 2026 to make improvements and upgrades to recreational facilities. About three-quarters of respondents strongly or somewhat supported the renewal.

Under the community characteristics pillar, ratings were generally high across the board and many saw significant increases in positive responses from the 2015 survey:

There were some negative trends, however. Only 34 percent of respondents felt there was sufficient shopping opportunities, which is below the national average and down from 41 percent in 2015. Ratings for child care/preschool also decreased from 57 percent to 51 percent.

In the final pillar, participation, responses were similar.

Sixty-one percent of residents indicated there is a sense of community in Hutchinson, and 87 percent responded that they would recommend Hutchinson as a place to live. When it comes to participation in government, however, only 40 percent had contacted a city employee in the past 12 months. That percentage has been dropping since the first survey in 2007, when the result was 60 percent. Additionally, only 1 in 10 residents have campaigned for an issue, cause or candidate.