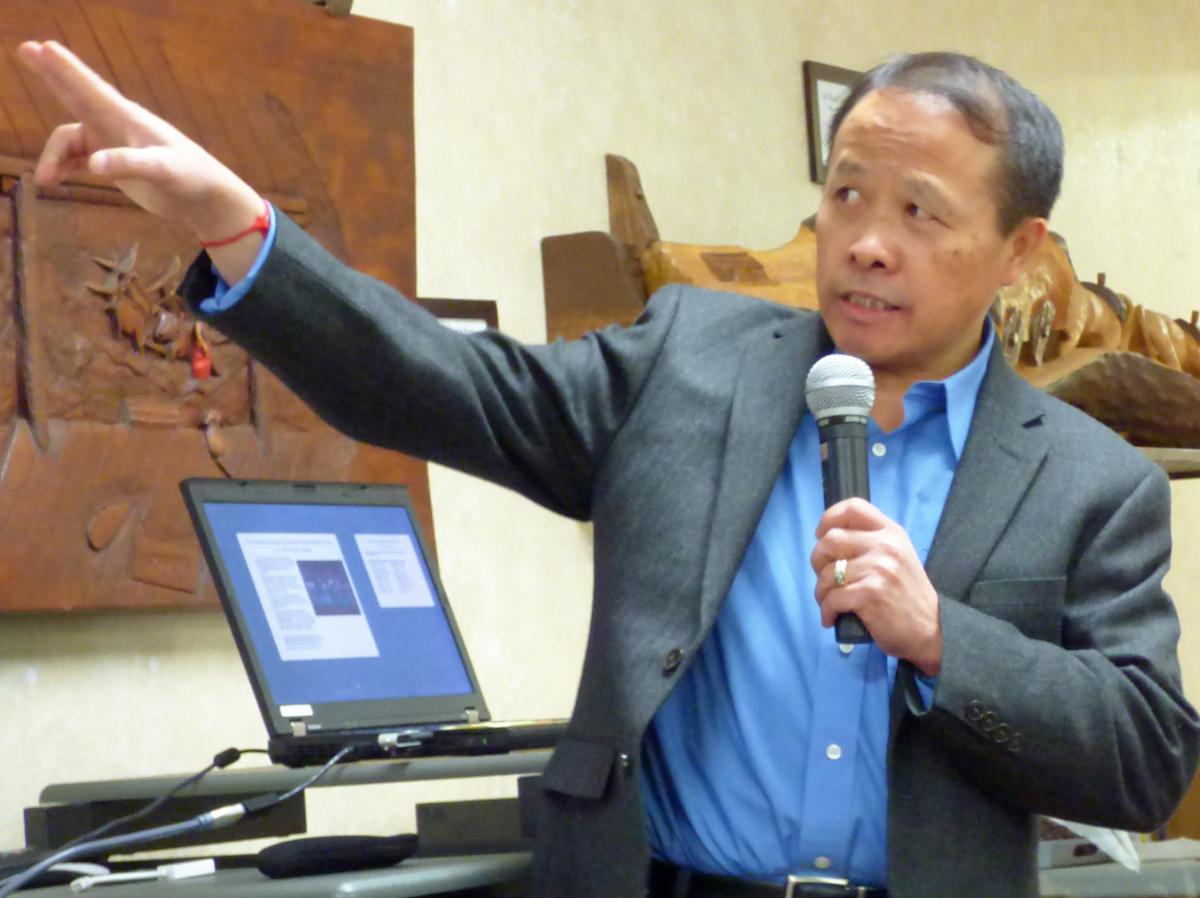 Presenter Txongpao Lee, executive director of the Hmong Cultural Center in St. Paul, shared information about the Hmong language, history and culture during his presentation Saturday at the McLeod County Historical Museum in Hutchinson. 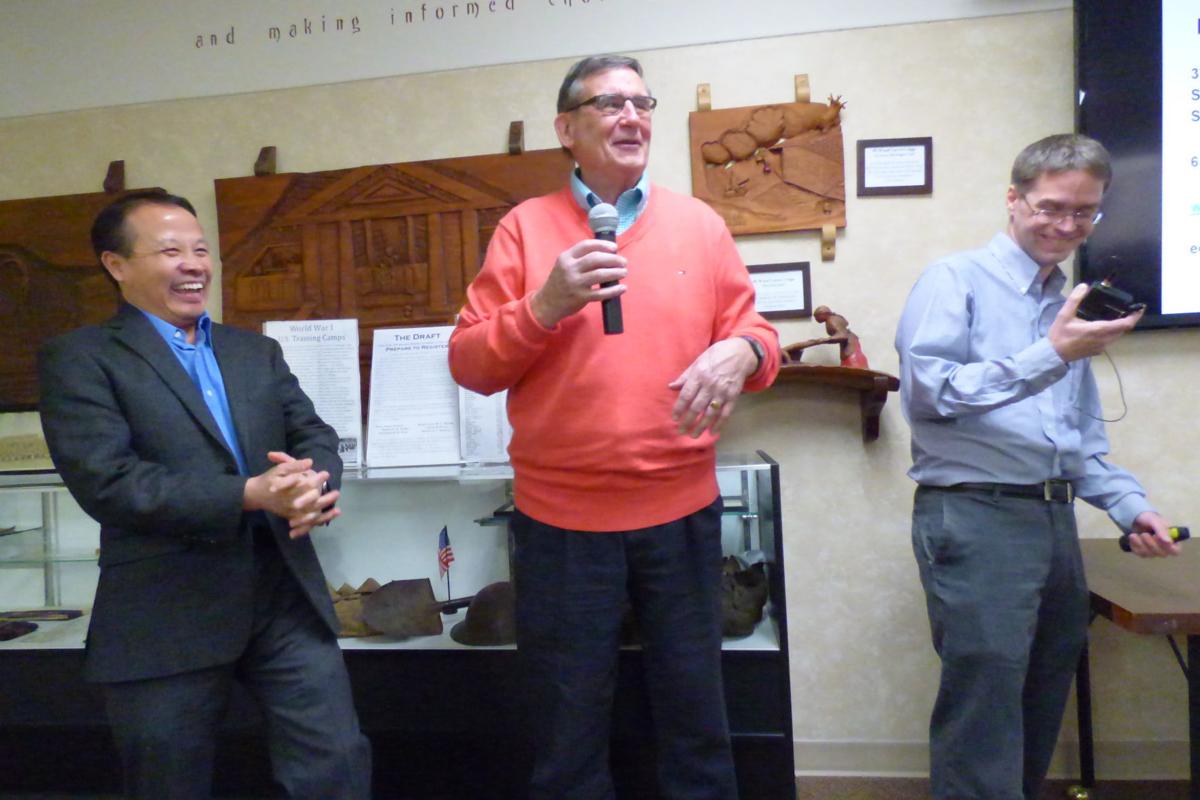 Following the “Hmong 101” presentation, John Hassinger, center, emcee and a member of the One Book, One Community committee, made a couple of clever quips to the audience, which caused the speakers Txongpao Lee, left, and Dr. Mark Pfeifer to break out in smiles.

Presenter Txongpao Lee, executive director of the Hmong Cultural Center in St. Paul, shared information about the Hmong language, history and culture during his presentation Saturday at the McLeod County Historical Museum in Hutchinson.

Following the “Hmong 101” presentation, John Hassinger, center, emcee and a member of the One Book, One Community committee, made a couple of clever quips to the audience, which caused the speakers Txongpao Lee, left, and Dr. Mark Pfeifer to break out in smiles.

With immigration an ever-present item in the news, it’s not surprising there was a high turnout Saturday for the One Book, One Community program, “Hmong 101.”

Txongpao Lee, executive director of the Hmong Cultural Center in St. Paul, and Dr. Mark Pfeifer, director of programs, development and librarian at the center, presented the story of the Hmong people.

“To hear the perspective of someone who had been through it and the other speaker who had studied it, having both angles was tremendous,” he said.

Jeanne Langan, a member of the One Book, One Community committee, agreed with Johnson.

“It was informative and well done,” she said. “The two speakers did a good job relaying their information along with a PowerPoint presentation.”

Among the things Langan said she learned — the Hmong originally came from China. They worship in homes and don’t have a temple, and how Minnesota came to have the second largest Hmong population in the U.S.

Saturday’s event was the first of three events providing background and context for this year’s community read, “The Song Poet: A Memoir of My Father” by Kao Kalia Yang.

Lee and Pfeifer told the story of the Hmong immigration to Minnesota. It started during the Vietnam War when the Hmong backed U.S. forces. North Vietnam transported supplies through the jungles of Laos. To disrupt it, the CIA enlisted the help of Van Pao, the highest ranking Hmong leader. He recruited as many as 39,000 troops to fight in what was known as the Secret War.

After the fall of Saigon and the North Vietnamese invasion of Laos, an estimated 10,000 or more Hmong were killed. The Hmong people immigrated to the United States as well as other countries to escape persecution, human rights violations, military attacks and ethnic cleansing.

Many Hmong came to Minnesota because of the availability of manufacturing jobs. They also work in retail, educational services and health care. Some farm, selling their wares at the Minneapolis and St. Paul farmers markets.

Success in their new country was not easy for the refugees. They had to overcome cultural differences and language barriers. As a result, many suffered from depression and post-traumatic stress disorder.

Lee was 15 years old when he arrived in Minnesota in November 1984. His trip had taken nine years. It started at his home — a rice and corn farm in a rural mountain village of Laos. His uncle served with Gen. Van Pao and followed him to the United States.

He was originally one of 13 children in his family, but five died from disease while still in Laos.

To escape communist forces, Lee and his family had to cross the Mekong River, the 12th longest river in the world, which separates Laos from Thailand. While many Hmong were killed by border guards or drowned, his family survived.

His mother died at the Ban Vinai refugee camp in Thailand. From there, the family chose to immigrate to Minnesota where his uncle had settled.

When Lee arrived in St. Paul, he saw snow and felt the cold for the first time. It was a big change from the hot, humid conditions of southeast Asia.

Lee went on to graduate from high school and become the first member of his family to graduate from college. He is the head of the Hmong Cultural Center, which promotes multicultural education through exhibits about Hmong culture and history. The center also provides citizenship and English language classes. It’s not unlike the Bohemian Reading and Educational Society founded in 1876 by Bohemian settlers in McLeod County. It was a place where immigrants could connect with their own kind.

Next One Book, One Community programs

Now that's you've learned the background of people featured in "The Song Poet," join in the following events:

One Book, One Community is sponsored by the Heart of Hutchinson Connect Committee in collaboration with the Hutchinson Public Library and the McLeod County Historical Society. For more information, visit heartofhutch.com, or call Katy Hiltner, head librarian, at 320-587-2368.

View the gallery from Saturday's "Hmong 101" presentation at bit.ly/2Bs61zK.

View the video from Saturday's program at bit.ly/2BtoWdP.