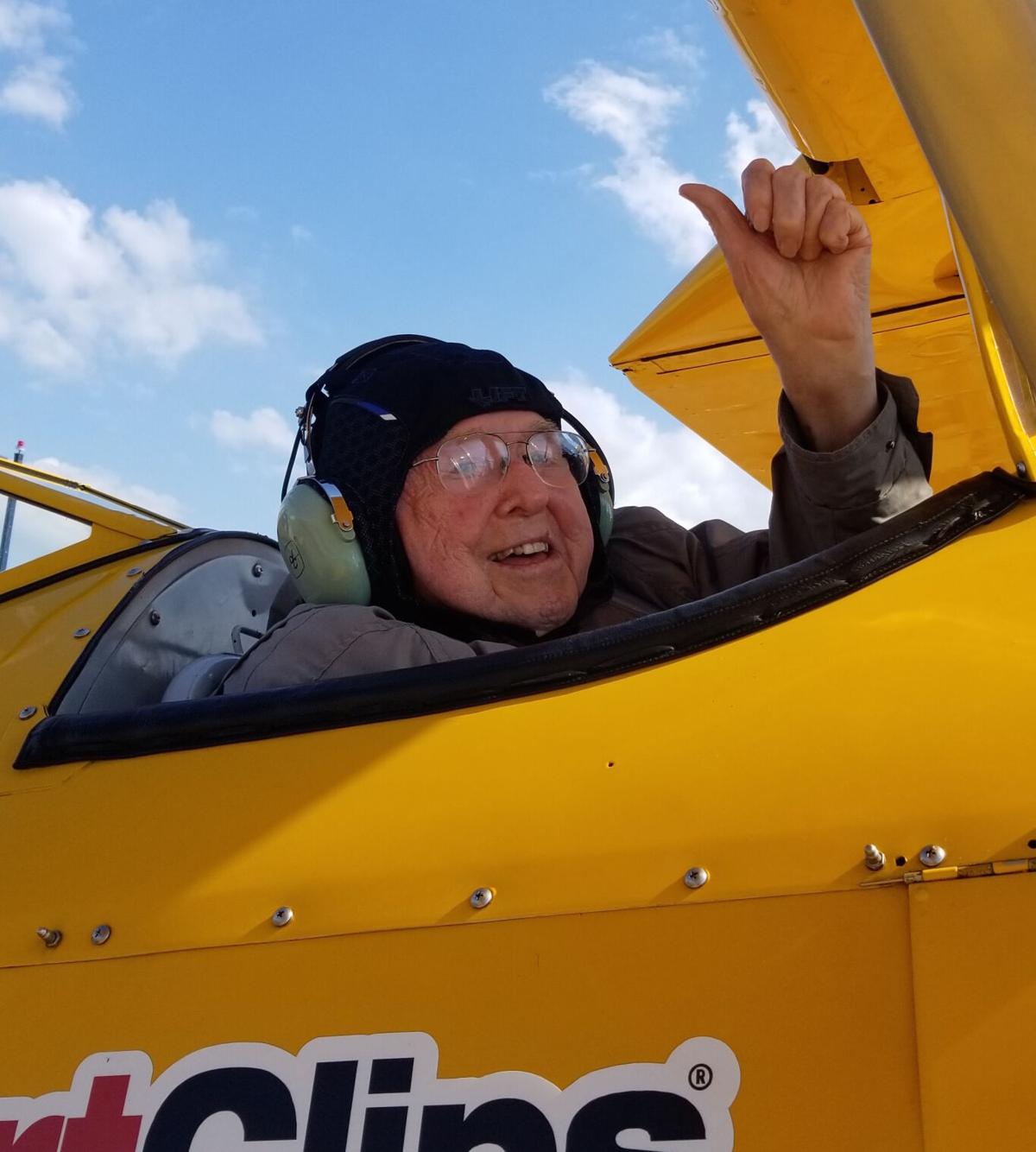 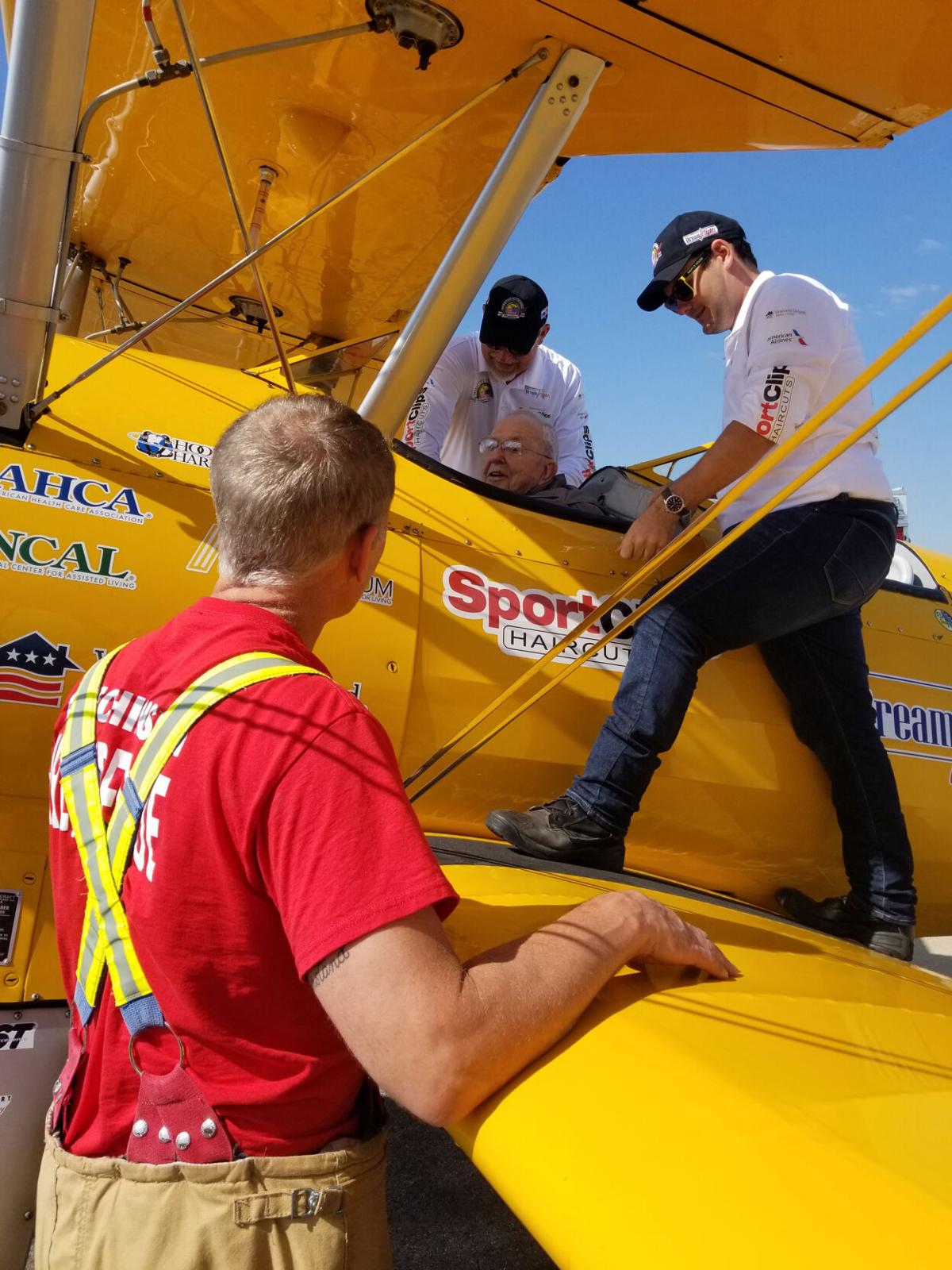 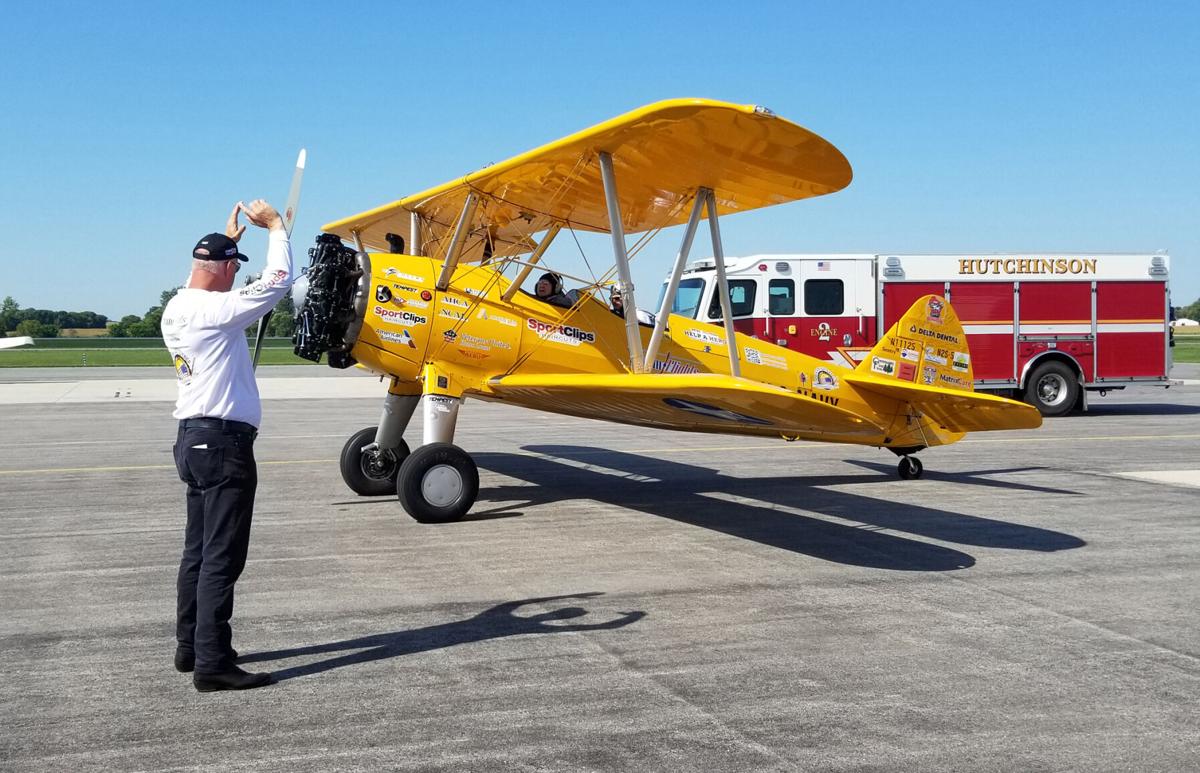 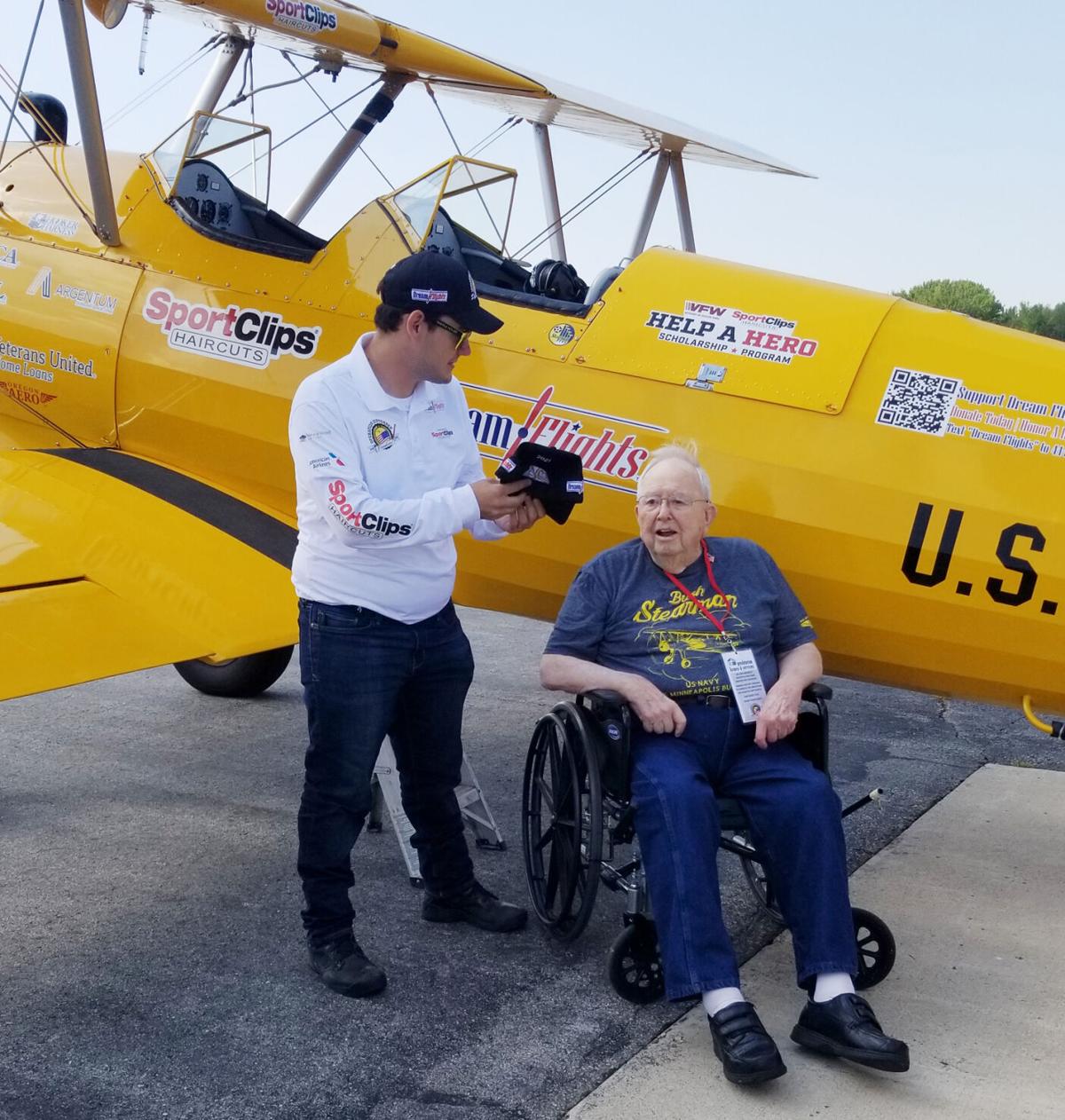 Otto “Woody” Anderberg will long remember Aug. 31. It’s not every day you’re treated to a lights-flashing-and-horns-blasting escort by the Hutchinson police and fire departments. The 100-year-old World War II veteran who rode in a DAV-supplied van was on his way to Butler Field for the flight of a lifetime.

Anderberg, who lives at Harmony River, a Presbyterian Homes and Services senior living community in Hutchinson, was a participant in Operation September Freedom.

Sponsored by Dream Flights, the nonprofit organization launched Operation September Freedom Dec. 7, 2020, with a mission to locate and honor as many World War II veterans as possible with free Dream Flights. The coast-to-coast national tour began Aug. 1 and runs through September. Volunteer pilots are flying six restored Boeing Stearman biplanes and stopping in towns wherever WWII veterans live to fly them 1,000 feet into the air for a 15-20 minute ride. Since 2011, Dream Flights has honored more than 4,200 seniors and veterans with biplane rides. Operation September Freedom is Dream Flights’ first tour with a mission of honoring veterans who served in a particular war.

After several speeches, the singing of “The Star-Spangled Banner” and thunderous applause by friends and family, Anderberg was assisted into the cockpit of The Spirit of Wisconsin, a restored bright yellow 1943 Boeing Stearman biplane, which used the same engine found in Gen. George S. Patton’s tanks.

“It was pretty smooth,” he said of the experience “They hoisted me in.”

When he was asked if he talked with the pilot via the headset he wore, Anderberg answered with a quick, “No.”

“I was too busy looking around,” he said. “I was surprised by how much water there is in McLeod County, how many lakes and streams.”

“Operation September Freedom is our last chance to honor our nation’s WWII heroes for their service and sacrifice,” he said in a press release. “Wherever WWII veterans are located, we’ll find our way to their nearest airport and create a moment of magic they can relive until their last days.”

According to Marilyn Chaffee, vice president of operations and pilot for Dream Flights, the group felt a sense of urgency. WWII effectively ended on Victory over Japan Day, or V-J Day, Sept. 2, 1945. Now 66 years later, of the 16 million Americans who answered the call to serve, only about 100,000 are alive today. As a result, they chose to focus on providing flights exclusively for World War II vets through Sept. 30.

Looking back on Tuesday’s event, daughter Debra Field of Litchfield thought it was “fabulous.”

“Our whole family was thrilled for him,” she said. “I think it’s a wonderful program.”

The Grove City farm boy enlisted in the Army Air Corps in 1942 during World War II. He wanted to be a pilot, but due to missing two weeks of training because of illness, he was eliminated from the program.

Anderberg didn’t go far for his next assignment as an aerial gunner instructor in Loretto, Texas; Phoenix, Arizona; and Rapid City, South Dakota. He taught soldiers how to assemble, use and repair the five .30 caliber (7.62 mm) machine guns used on the Boeing B-17 Flying Fortress four-engined heavy bomber.

“They had to know how to assemble it blindfolded,” he recalled.

In an interesting twist, Anderberg recently learned that one of his students back then was the father of a fellow Harmony River resident.

During the 1940s, he said Phoenix was known as the “Hollywood of the Army Air Corps.” The moniker was earned because the movie “Thunderbirds” used the air field as a backdrop. The film was directed by William A. Wellman and starred Gene Tierney, Preston Foster and John Sutton.

“I had 100 hours piloting in the Stearman,” he said. “The last time I flew in a biplane was 1945. Piloting is more fun. We were practicing maneuvers all the time in the Air Corps. We just flew on Tuesday, no maneuvers.”

After his discharge in 1946, Anderberg was appointed postmaster of Grove City by President Harry Truman. Looking for a change in his career, he later became a rural carrier.

Reflecting on his long life, he’s proud of his two children — Brian, who lives in Bloomington, and Field, three grandchildren and five great-grandchildren.

The centenarian moved to Harmony River in December.

"I was surprised by how much water there is in McLeod County, how many lakes and streams."