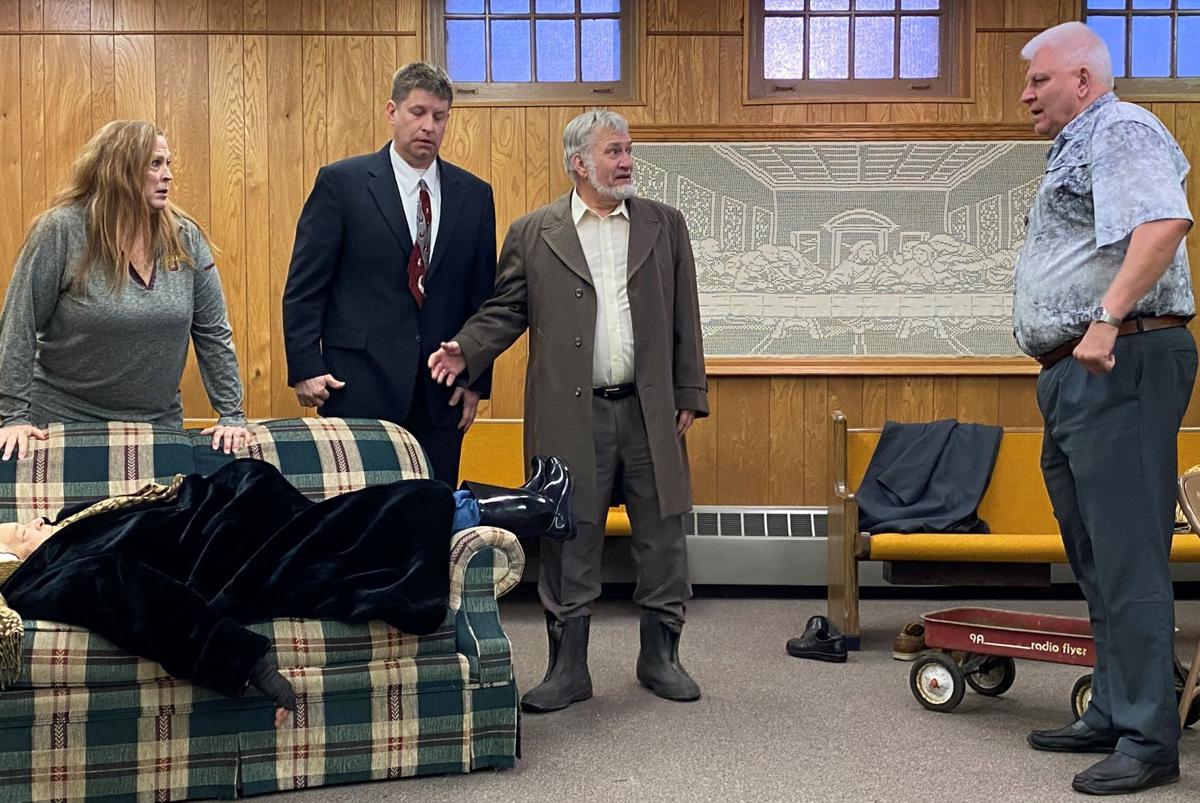 Policeman (Brian Stark), right, wants to know what’s going on with his friend, Opal, as Solomon (Bill Haas) attempts to explain. Looking on is Gloria and the “Professor” Bradford Winter. 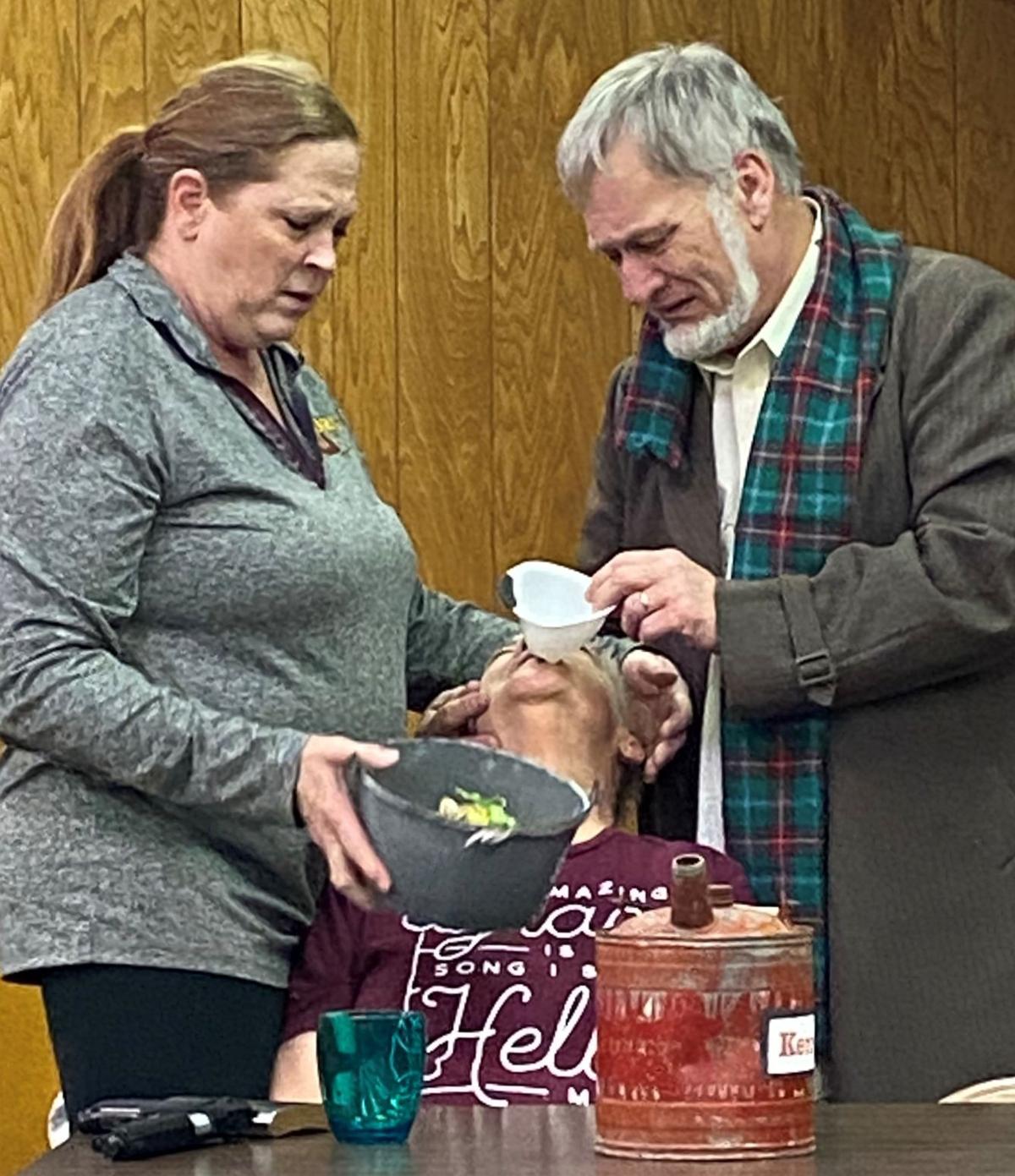 Another near miss for Opal as Gloria (Melanie Brown) and Solomon (Bill Haas) work to save her after she drinks kerosene. 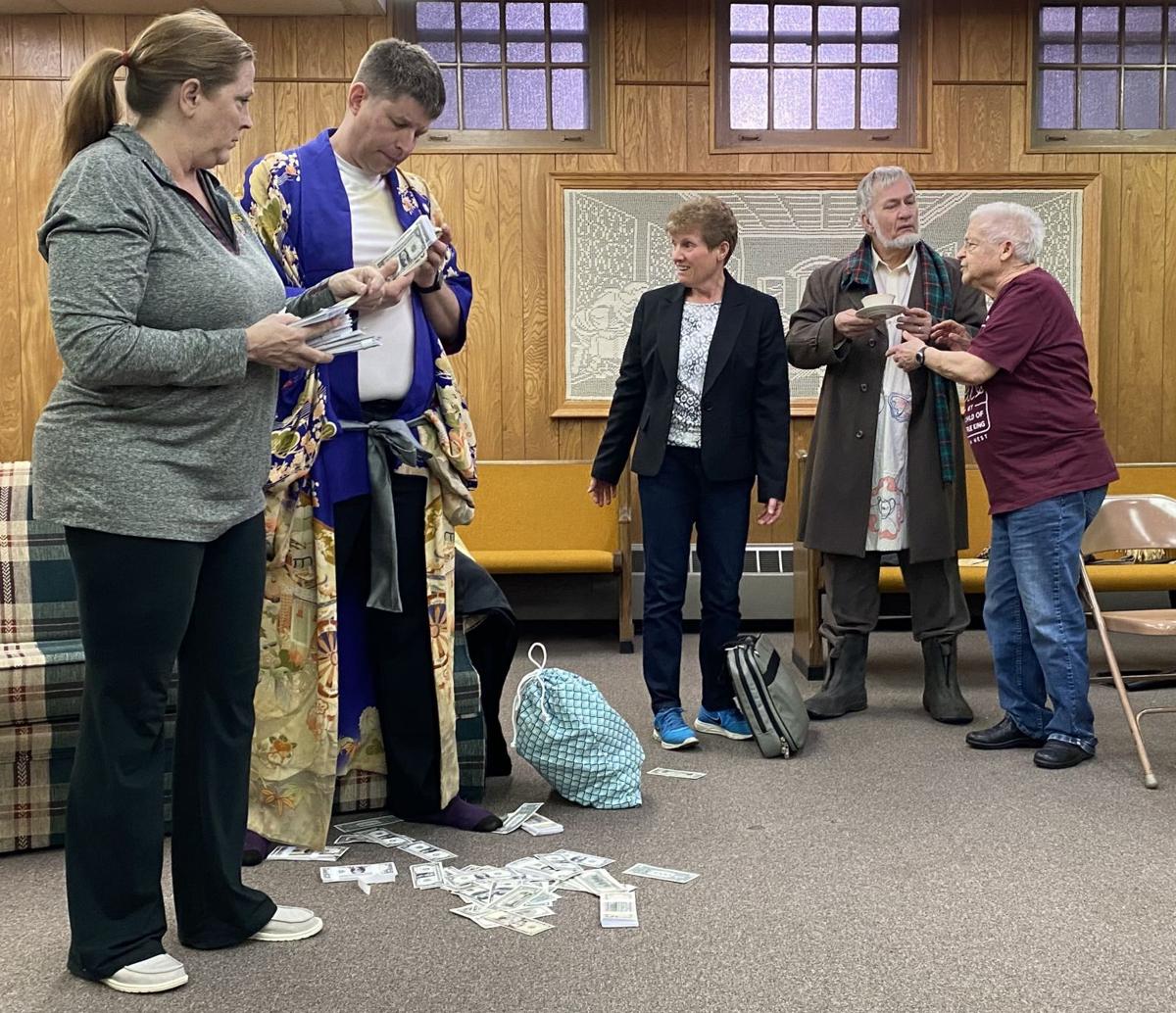 Money, money, money is the name of the game as Gloria (Melanie Brown) and Bradford Winter (Joe Theis) count the bills. In the background is the Doctor (Kathleen Theis), Solomon (Bill Haas) and Opal (Betty Ruskamp). 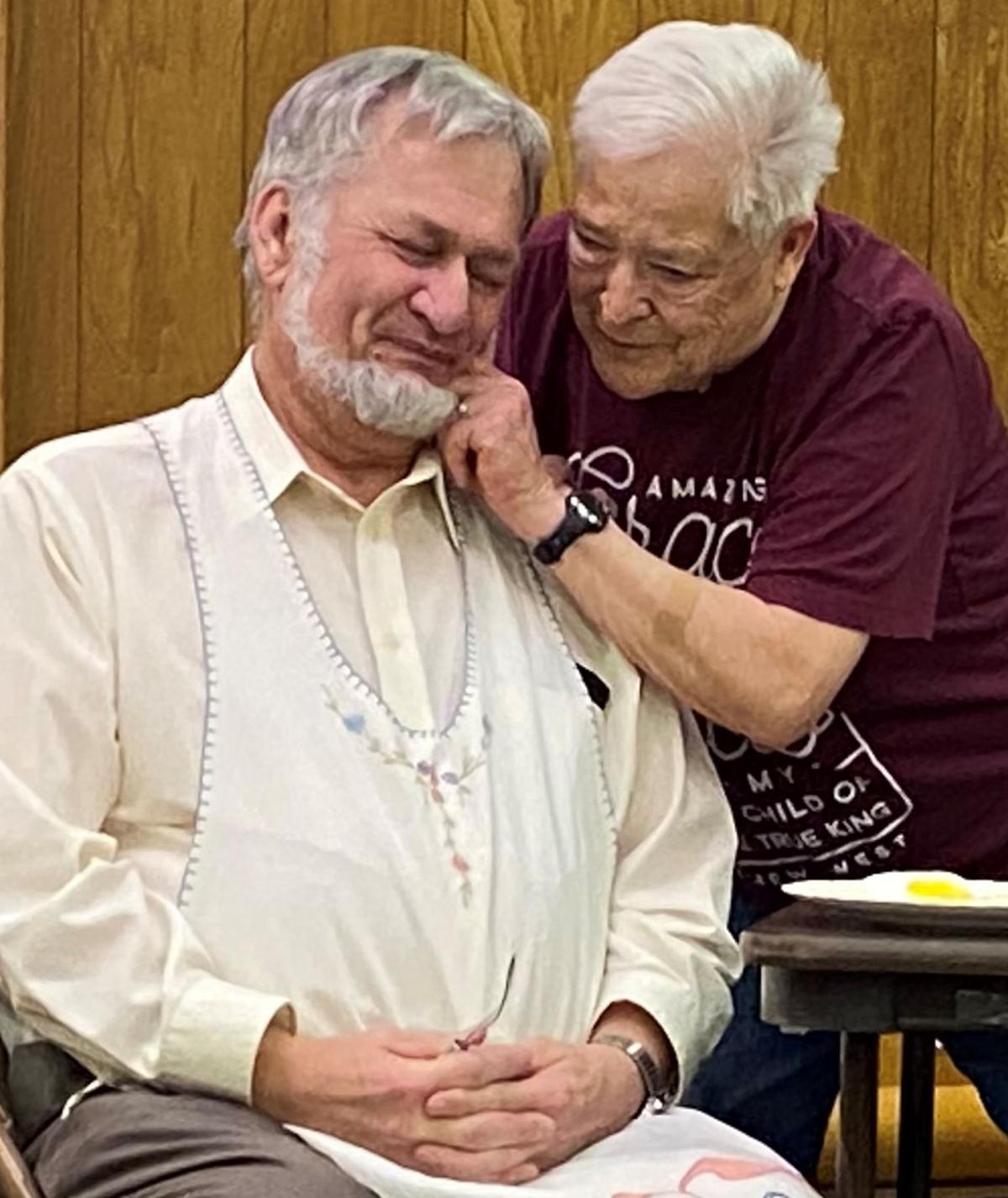 Everyone falls under the spell of Opal (Betty Ruskamp), as she tweaks the cheek of guest Solomon Bozo (Bill Haas).

Policeman (Brian Stark), right, wants to know what’s going on with his friend, Opal, as Solomon (Bill Haas) attempts to explain. Looking on is Gloria and the “Professor” Bradford Winter.

Another near miss for Opal as Gloria (Melanie Brown) and Solomon (Bill Haas) work to save her after she drinks kerosene.

Money, money, money is the name of the game as Gloria (Melanie Brown) and Bradford Winter (Joe Theis) count the bills. In the background is the Doctor (Kathleen Theis), Solomon (Bill Haas) and Opal (Betty Ruskamp).

Everyone falls under the spell of Opal (Betty Ruskamp), as she tweaks the cheek of guest Solomon Bozo (Bill Haas).

It was about this time last year that life as we know it came to a screeching halt. Among the many things canceled or postponed due to the COVID-19 pandemic was Hutchinson Theatre Company's spring, summer and fall productions.

While 2020 is the season that never was, the same can't be said about 2021. To celebrate the return of in-person live theater, the Hutchinson Theatre Company is rebooting its 2020 schedule with the comedy "Everybody Loves Opal," April 15-17 and 22-24 at the Silver Lake Auditorium.

This is a new venue for the troupe. The show was to be performed at the Hutchinson Center for the Arts, but due to state COVID restrictions at the time the board began planning, the audience size would have been restricted to approximately 20 people. Thus, the Silver Lake Auditorium.

"As a participant in many HTC shows," Haas said, "I can say we have always wanted to take a show ‘on the road’ — now we can!"

It's also not every director or actor who can say he had a year off between rehearsals. Haas described it as "an odd experience."

"We were literally a few days away from performing last year when the board had to pull the plug because of the developing pandemic," he remembered. "The cast was ready and firing on all cylinders. Everyone was excited and anxious to perform for a live audience. I saw it coming and tried to prepare the cast ahead of time for the very real possibility of a cancellation, but you can’t really believe it will happen until it does."

At the time, the question was whether the delay would just be a few weeks or more, so the set was left up for nearly a month, but in the end it wasn't to be.

"When the board contacted me in September to gauge my interest and the interest of the cast in resurrecting the show, I was excited by the idea but a bit hesitant, not wanting to get everyone fired up again just to face another cancellation," Haas said. "I contacted the cast and to my delight, everyone was very open to the idea. In the end, everyone but John Beck was able to commit to doing the show this spring."

Fortunately the time off didn't hurt the show because Haas was pleased how easily the cast slipped back into the characters they had created and how quickly the lines and blocking have come back to everyone.

Haas is doing double duty this time around. In addition to directing, he stepped into the role of Solomon Bozo, which was originally to be played by Beck.

"Directing and acting in the same show does come with some real challenges, and to be honest, my preference is to do one or the other but not both," Haas said.

The problem becomes maintaining the objectivity necessary as a director while staying in character as an actor. Haas met this challenge in 2018 when he directed and acted in "Don't Dress for Dinner." He credited student director Jamie Rosenau for providing that objective set of eyes. This time around, Mary Fylling, HTC's stage manager, props and costume person, and a longtime director, is providing that extra set of eyes as needed.

"Everybody Loves Opal" originally opened in 1962. Haas credited its longtime appeal to universal themes such as love, repentance, forgiveness and restoration. The show centers around Opal Kronkie, an older adult recluse who lives in a tumbledown mansion at the edge of the municipal dump. The general disarray of her establishment is aggravated by the fact that Opal collects things. Into her world comes Gloria, Bradford and Solomon, three purveyors of bogus perfume on the lam from the authorities.

Opal's home is the perfect hideout — and Opal, herself, might be the remedy for their shattered finances. They decide that what she needs is plenty of insurance, a rapid demise, and three beneficiaries named Gloria, Bradford and Solomon. The unsavory trio repeatedly concoct elaborate schemes but are thwarted again and again.

Through it all, Opal radiates kindness, affection and, strangely enough, gratitude. But the real clincher comes at the end as the trio finds the importance of friendship and that, sometimes, all you have to do is ask.

"Like all of John Patrick's plays, the characters are full and interesting, the humor is warm and human, the plot is fun and interesting, and the theme is full of hope," Haas said. "Especially during this pandemic, I believe it will be nice for an audience to leave feeling more optimistic than when they arrived."

Like Haas, Melanie Brown is a familiar face on the community theater stage, and she, too, called the yearlong hiatus "a bit strange."

"It is a first for sure," she said. "However, I really like this character and the team I am working with. I was surprised that I remembered more of it than I thought I would."

Brown described her character — Gloria Gulock — as "lots of fun to play."

"She is a ditzy redhead," the actress said, "I don't feel like I'm ditzy, but it is fun to work on that character. She is ambitious, which I do relate to. She tries hard."

"I was excited to get back to 'Opal,'" she said. "We were all disappointed when we were shut down last year so close to opening."

Ruskamp described Opal as "an interesting character who is kind and can't find fault in anybody no matter what they do to her."

"I like that she always looks on the bright side of things," Ruskamp said. "I'm not sure if I really share any personality traits with her except her love for her friends."

Haas described his character, Solomon Bozo, as the slovenly, inept head of a small criminal enterprise.

"He is a self-confessed bum and slob and is not a bright fellow," Haas said. "He is, however, capable of repentance, change and growth. I sincerely hope those last three characteristics are the only things I have in common with Sol."

Brian Stark is another returner. This time around he is playing the role of a police officer.

"I am very inquisitive about what is going on with my close friend Opal concerning the new friends that she has just met," Stark said. "I suspect them to be very suspicious characters, so I do some investigating on my own to see what their motives really are. I get to use a little police force and even draw my gun at one point. I’ll leave it at that."

This is Kathleen Theis' first appearance in a Hutchinson Theatre Company production.

"I was thrilled to get a part," she said. "The cantankerous doctor has a small but funny scene. Being a doctor is really acting for me, since I’m a farmer."

Like Kathleen, this is Joe Theis' first appearance on the local community stage, too. Haas recruited him for the role of Bradford Winter, who Joe describes as a "very cynical and sarcastic man that has no doubt he's the smartest person in the room."

"I am a naturally sarcastic person, so that trait wasn't quite as much of an issue for me per se," he said. "That being said, some of his other attributes were, at first, a bit difficult for me to pull off. The rest of the cast has been very diligent and at the same time patient with me in helping me shape Brad's character."

With opening night a couple weeks away, the cast is polishing their performances for a return to live, in-person theater. The actors are looking forward to enthusiastic audiences ready for an evening of feel-good entertainment.

"It will give us all a chance to be able to hang out with friends again, and what better of an opportunity is there than for people to be able to get together by attending this play and enjoy some good laughter as a group?" Stark said. "Laughter makes the world go around, and we need to have our world go around again as close to what it was in the past. We need to bounce back as a society, so people should sign up and come out to enjoy the show."

What: Hutchinson Theatre Company presents the comedy "Everybody Loves Opal"

Where: Silver Lake Auditorium. Capacity is limited to 80 patrons per performance, masks are required and social distancing will be observed

Admission: Tickets are $20 and available for purchase at the Hutchinson Center for the Arts, 15 Franklin St. S.W. or at hutchtheatre.org