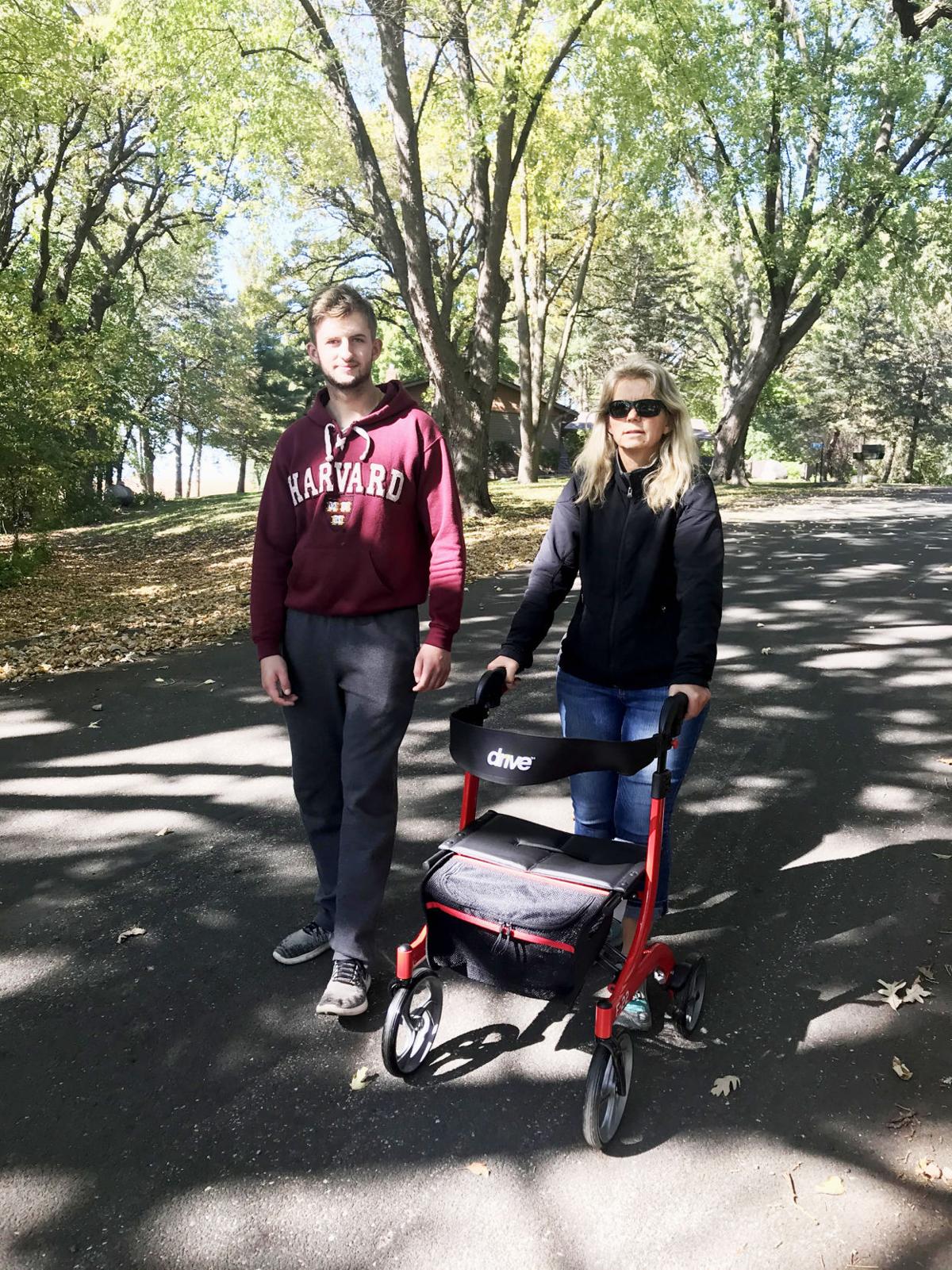 Dylan with his mom

Dylan Langan of Hutchinson walks with his mother, Zyvonne, in late September 2020, just a couple weeks after being diagnosed with Creutzfeldt-Jakob disease, a rare and fatal degenerative brain disorder. Zyvonne died in October, and although it was a difficult time for the Langan family, they were grateful for the help of Allina Hospice services. 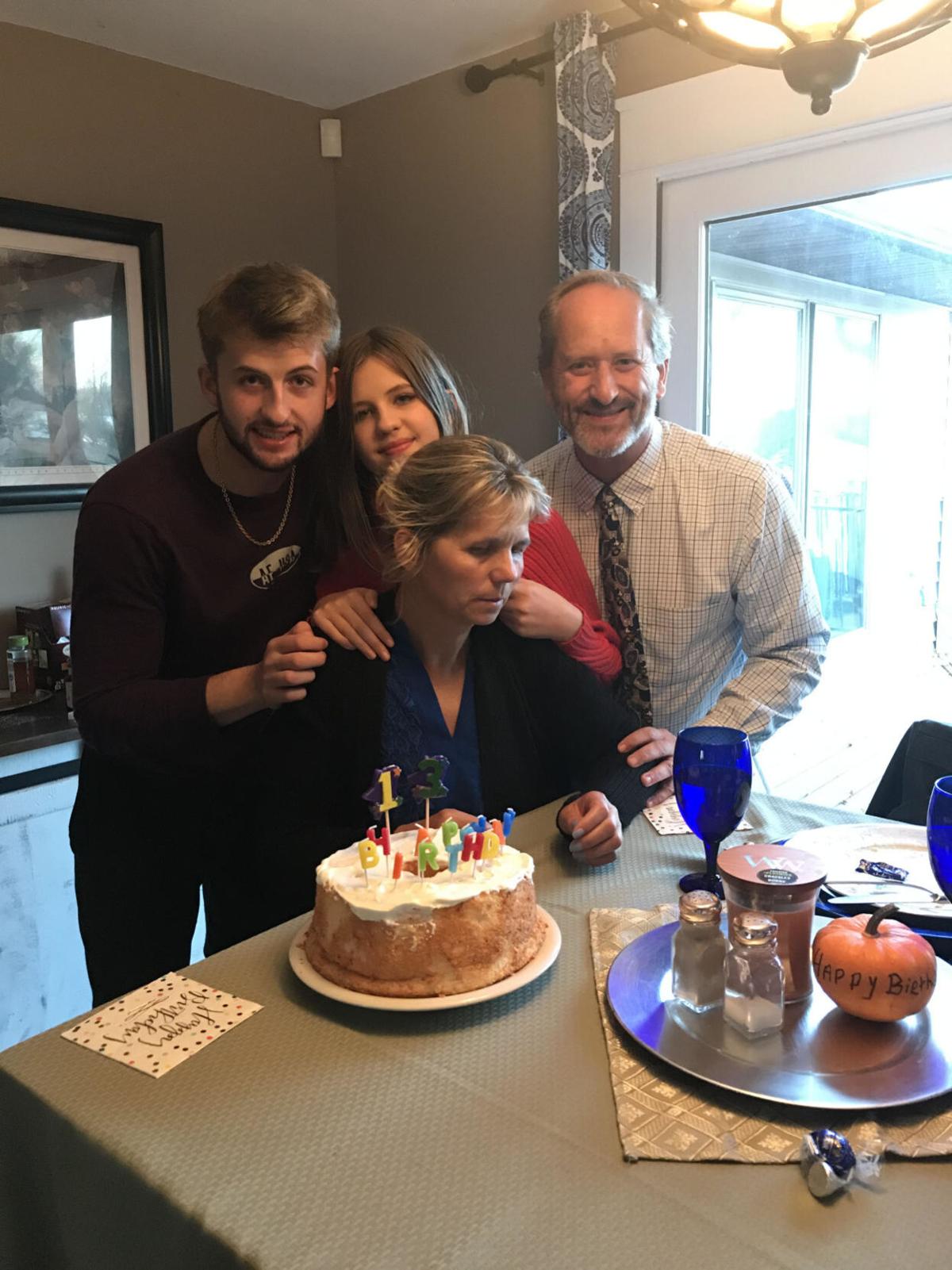 This Langan family photo was taken Oct. 15, 2020, on daughter Zoe’s 13th birthday. “It is evident how disengaged Zyvonne is due to the ravaging brain disease,” said Dave, Zyvonne’s husband. “She would enter ‘hospice house’ the next day and die a week later.”

Dylan with his mom

Dylan Langan of Hutchinson walks with his mother, Zyvonne, in late September 2020, just a couple weeks after being diagnosed with Creutzfeldt-Jakob disease, a rare and fatal degenerative brain disorder. Zyvonne died in October, and although it was a difficult time for the Langan family, they were grateful for the help of Allina Hospice services.

This Langan family photo was taken Oct. 15, 2020, on daughter Zoe’s 13th birthday. “It is evident how disengaged Zyvonne is due to the ravaging brain disease,” said Dave, Zyvonne’s husband. “She would enter ‘hospice house’ the next day and die a week later.”

The last Friday of January has traditionally been reserved for Blizzard Blast, the Allina Hospice Foundation fundraiser. It's an annual event that brings in thousands of dollars in donations that are used to support patients with massage and music therapy services, which are not reimbursed by Medicare or private insurance.

Like most things scheduled during the past nine months or so, the 15th annual Blizzard Blast was canceled due to the COVID-19 pandemic. While the event didn't happen, fundraising continues.

In case you're wondering why massage and music therapy are important — massage therapy can help to manage a patient's pain, reduce stress and improve circulation. Music therapy provides physical, emotional and social comfort. Both services are led by certified therapists and therapy sessions are individualized to provide comfort for each patient.

Lona Oltmann, a registered office nurse at Allina Health Home Care Hutchinson/Glencoe branch and longtime Blizzard Blast volunteer, credited the success of the event to a “generous community who supports hospice along with willing volunteers.”

Serving with Oltmann on the Blizzard Blast Committee is Barb Buska, Mary Carlson, Jaidyn Cohrs, Sharon Gruenhagen, Judy Hecksel, Karen Jannusch, Leslie Johnson, Sara Kramer, Alissa Pretzel and Lacey Schuette. Oltmann was pleased because for the first time, new faces came to her and asked about serving on the committee.

"This has not happened in the past," she said. "So that too warms my heart that community people see not only the benefits of hospice, but also to be part of the blood, sweat and tears putting the event together."

"Businesses and people are hurting financially. I totally get that," Oltmann said. "My thoughts are if everyone even donates the amount of a ticket ($35) per person, we would be ever so grateful. Anything above that is truly a gift."

While some think of hospice as a building or a special place, it's not bricks and mortar, but an end-of-life care philosophy. The object is to treat the whole person, not just the disease. The emphasis is on comfort care and quality of life.

Hospice services are available wherever a patient chooses to live: at home, in an assisted-living facility or nursing home.

This past year, Allina Hospice saw its highest number of admissions ever with 248 patients. It saw 244 deaths in 2020, with an average length of stay of 65 days while on hospice. The average daily census for 2020 was 42.35.

"This is our highest number of hospice admissions ever," Oltmann said. "In January 2013, when we became a branch of Allina, we had six patients at that time, and we typically averaged about 12 patients per day on census."

Among those who received hospice services in 2020 was Zyvonne Langan of Hutchinson, who died Oct. 23 of Creutzfeldt-Jakob disease. It is an extremely rare, fatal degenerative brain disorder, with fewer than 1,000 U.S. cases per year.

According to her husband, Dave, Zyvonne was diagnosed Sept. 20.

“She had noticed unusual things and thought she had Alzheimer's,” he said. “She went to the doctor in November 2019. The doctor said, 'You don't have Alzheimer's.' Her condition deteriorated with numbness, losing balance, not being able to ride a bike. She thought maybe she needed an adjustment, so she went to see her chiropractor in early August. He performed a variety of tests and told her there was nothing he could do to help. He told her, 'You need to see a doctor right now.' That's what spurred her on.

"She saw a doctor at the clinic a week later. Her doctor ordered an MRI, afterward a neurologist read it. He ordered a lumbar puncture Sept. 1 and it took awhile to get the results back. He ordered one or two dozen tests from that fluid. We were waiting on the most important one. It was sent out of state. Not even the Mayo Clinic had the procedure to do it. It was the Cleveland Clinic that diagnosed it. The lumbar confirmed the neurologist's initial thought: Creutzfeldt-Jakob disease.”

The Langans expected to receive some kind of treatment program for her to get better. Unfortunately, the doctor told them there's no treatment. Typically a patient will have one to two years from the onset. They didn't know the start date, so they weren't sure how much time they had. It was the doctor who also recommended they sign up for hospice services right away.

“That really floored me,” Dave said. “We were told it was best to do it now, so the groundwork is laid. When it comes to that time, everything is established. I saw the wisdom in that.”

This meeting took place Sept. 17. The Langans met with Jetta Myllykangas, a registered nurse with Allina Hospice, for an assessment on Sept. 19.

Following the assessment, Myllykangas wanted the family to give it a day or two to digest all the information. One of the questions she always asks her patients is, "What is your goal, what is your hope?" In Zyvonne's case, she wanted to see her son, Dylan, graduate from college. That is in May. Myllykangas didn't think that would be possible.

"I said, 'You don't have much time. Most of the people I've seen and read about, you have maybe six weeks,'" Myllykangas said. "They thought I was wrong. That's when I started with the end-of-life talks. I knew this would be overwhelmingly fast and awful."

One request Zyvonne made was that she didn't want to die at home. The reason was their 12-year-old daughter. She didn't want Zoe to be haunted by memories of her mother dying in their home. But they didn't want her in an assisted-living facility either, where COVID restrictions and quarantine were in place.

Dave credited the good Lord for what happened next. Tammy Lauer, a good friend, offered her parents' home to the Langans. Her parents are snowbirds, so their home was vacant.

"God had already prepared my wife's end of days," Dave said. "It was revealed little by little. Zyvonne had a million friends, a dozen were nurses, retired nurses. It turned out we had a staff of nine nurses to do care for her at this house, with Jetta being the primary. She directed their activities. It was so helpful to have that available. Everyone in our family was able to stay at that house. We took over the living room as a hospital room."

Before hospice stepped in, Dave was Zyvonne's caregiver. But even as he managed to take care of many things for his wife, Myllykangas was able to step in and help in ways he couldn't.

“The biggest thing I saw, Dave could do everything for her but medication,” Myllykangas said. “She was super fearful of everything and everyone. She would hallucinate. He needed to give her these meds, but she would get super suspicious of him. His heart would feel bad, he couldn't do that. Knowing that, I saw he was so exhausted. I told him, 'Honey, you got bags for days under your eyes. That's it, we need to do something different.'”

"One thing that really changed my attitude about taking care of her myself was being able to shift over to other people," Dave said. "'Now,' Jetta said, 'You can just be her husband, don't be her caretaker. That meant so much."

Dave thought he knew what hospice was — a nurse at the bedside 24/7 — but he discovered it was much more.

"It led me peacefully to go through that transition of her death," he said. "For me, it's really so the patient can transition peacefully with the least discomfort and pain. That's exactly how she passed. It was exactly as Jetta had engineered, calm, peaceful. It really was an unbelievable experience."

While Myllykangas knows the value of hospice from the many patients and family she has served, she learned firsthand when her dad, John Myllykangas, was diagnosed with the coronavirus. He died Jan. 14 at Park Nicollet Methodist Hospital in St. Louis Park.

"I wish I had hospice for my dad," she said. "I didn't have that guide. It's the little things like what funeral home? We call the funeral home. We get funeral home set up.

"When the time comes up, it hurts. It hurts bad," she added. "Now more than ever, having my dad not on hospice, I know how much support we give and how much the family can be family. ... If I can help one person, hospice is a great idea."

To make a donation

To make a tax-deductible donation to the Allina Health Hospice Foundation:

To learn more about hospice

"It led me peacefully to go through that transition of her death. For me, it's really so the patient can transition peacefully with the least discomfort and pain. That's exactly how she passed. ... It really was an unbelievable experience."

— Dave Langan, husband of Zyvonne, who died in October while in hospice with Allina Hospice.