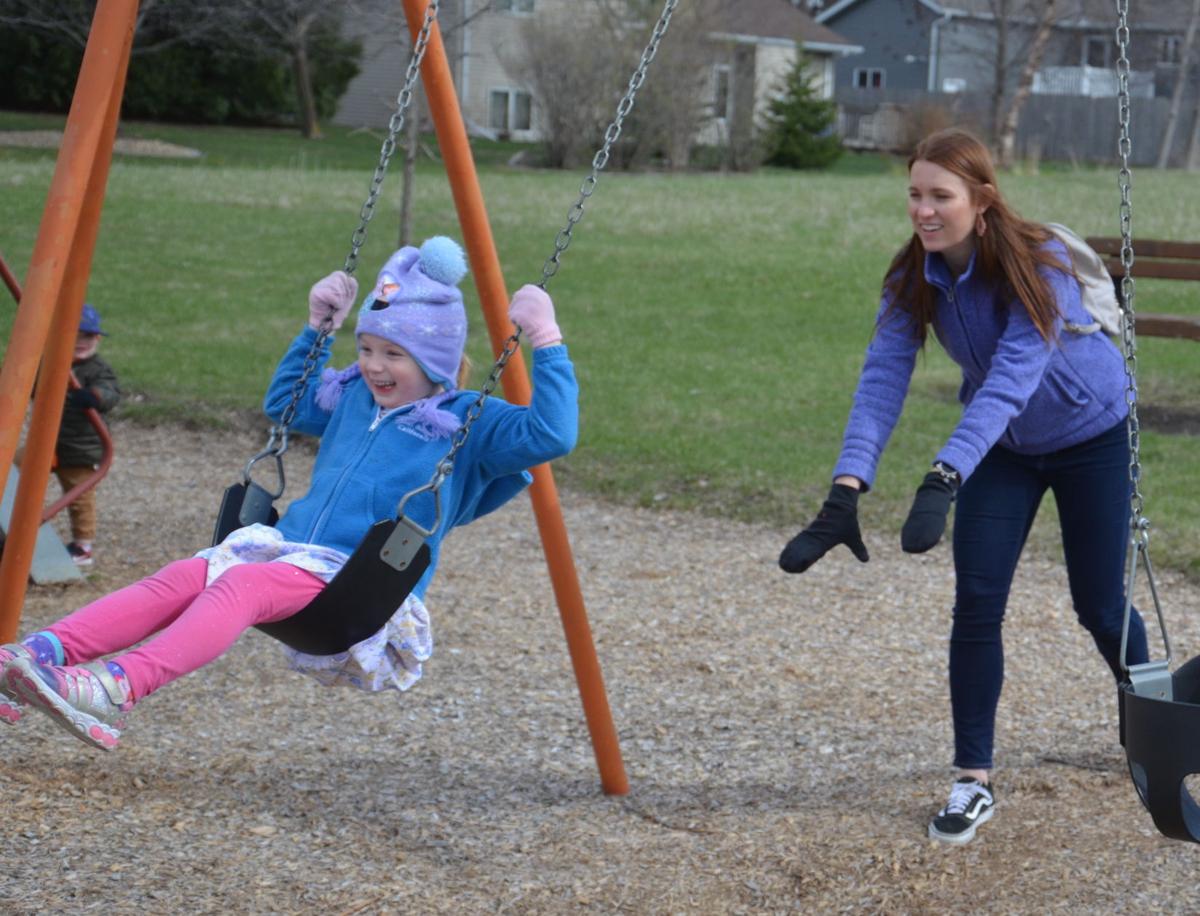 Five-year-old Breanne Stearns enjoys a push on the swings from her mother, Liz Stearns, at JC Women’s Park, or as Breanne calls it, “our park.” Liz and another neighborhood mother, Calli Schwartz, organized a grassroots effort to raise money for new playground equipment. 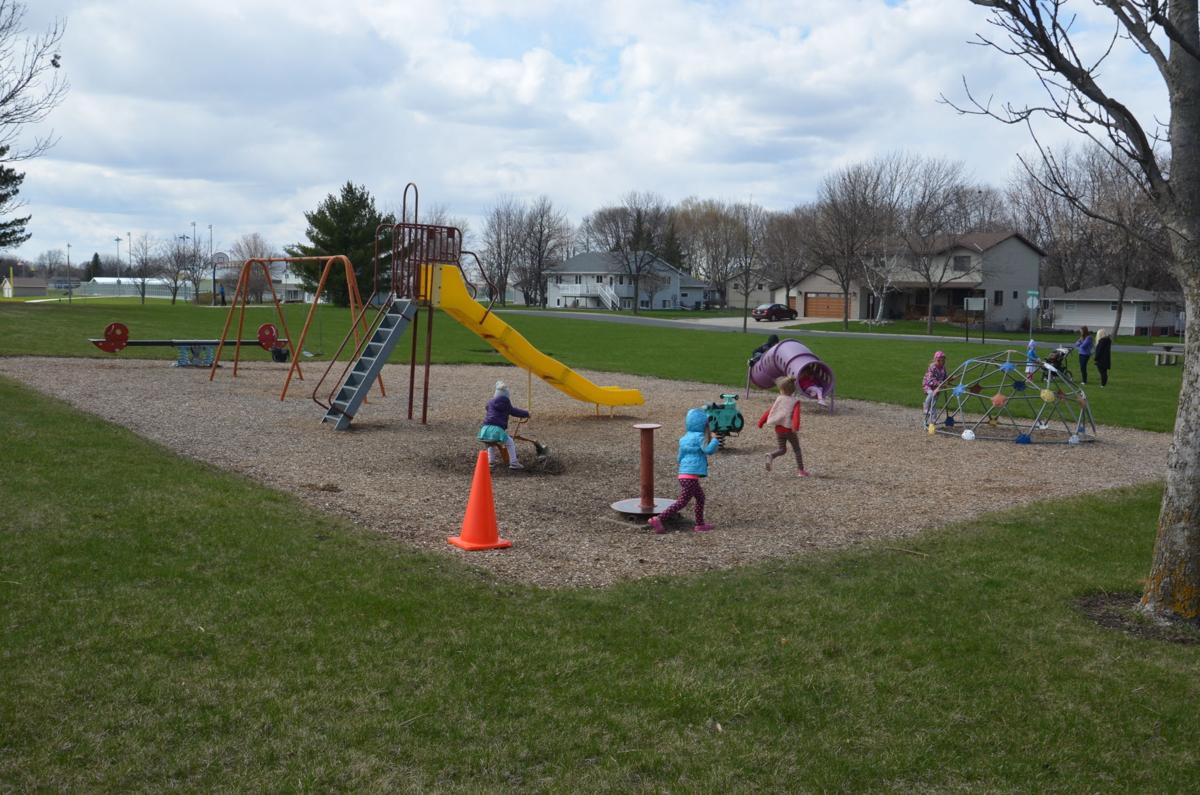 JC Women’s Park was built in 1995 near the Hutchinson High School tennis courts, and after 25 years the playground equipment will be upgraded later this year. 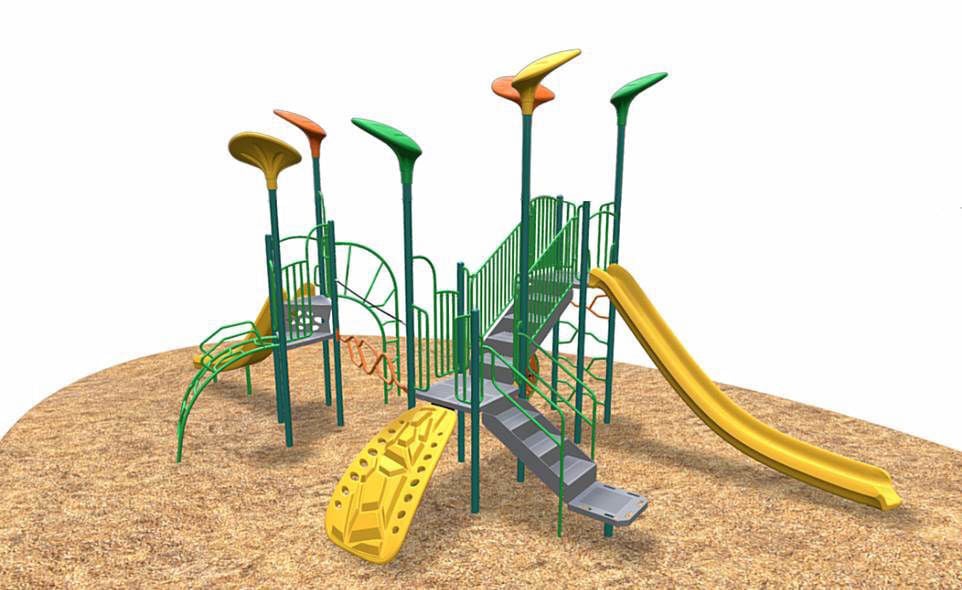 Here’s an example of how some of the upgrades to playground equipment at JC Women’s Park will look.

If you want something done in Hutchinson, sometimes you have to roll up your sleeves and do it yourself.

That’s the lesson Liz Stearns and Calli Schwartz, two Hutchinson mothers, learned after organizing a fundraiser for new playground equipment at JC Women’s Park. They hope other Hutchinson park fans can learn from their example as well.

If you’re not aware of JC Women’s Park, nobody could blame you. The unassuming playground at 1050 Goebel St. S.W., near the Hutchinson High School tennis courts, was built in 1995. Schwartz knows it well, as she grew up right across the street.

“My parents still live there … It was built when I was 3 years old,” Schwartz said. “So it’s been there my entire life, and it’s definitely in need of updating. It’s been well loved, but we need something else.”

The JC Women’s group originally sponsored the park, but it disbanded in the late 1990s, leaving a void. While other parks sponsored by active groups such as the Elks and Rotary have seen improvements over the years, JC Women’s Park has sat the same as it was since 1995.

Despite its outdated equipment, the playground is still a favorite for neighborhood children, especially Stearns’ 5-year-old daughter, Breanne, who calls it “our park.”

This past summer, however, Stearns and Schwartz felt it was time for an upgrade.

“We go on walks and go to playgrounds all summer long,” Stearns said. “Last summer they redid these (high school and middle school) fields, and we thought, ‘I wonder if they’re going to redo the playground soon?’”

According to Lynn Neumann, Hutchinson Parks, Recreation and Community Education director, the city keeps a playground equipment replacement plan for each park that includes the age of the equipment, its status, the neighborhood need and a budget. The city uses the list to determine which playgrounds are due for upgrades.

Stearns learned JC Women’s Park was on the equipment replacement plan, but not for another four years. That was too long in the women’s minds, so they asked if there was anything that could be done to move the park up the priority list. They were told that if they could raise $5,000 to help with the effort, the park could be renovated in 2021.

“If someone comes to us and they see a greater need at a park, and they would like it bumped up on the list,” Neumann said, “one of the ways to do that is to raise the money or show some community support so we can bump it up the list and get it done sooner.”

Starting in October, the women set out to raise $5,000. They started by launching a Facebook group and GoFundMe page, and continued their efforts through the winter.

“That was the big push on social media for individual donations, but we also reached out to local businesses to see if they wanted to donate,” Stearns said. “In the middle of a pandemic, we weren’t sure how that would turn out, and I felt we got a really good response.”

In December, the women turned to a unique way of raising money while spreading holiday joy. They collected used toys and listed them on Facebook Marketplace, asking people to pay what they could.

“So it was a way for us to put gifts under the tree for the holidays, but also any money that we did collect went toward the park,” Stearns said.

At the end of their efforts, the campaign had received donations from several local businesses and more than 70 families. Not only did they meet their $5,000 goal, the exceeded it by collecting $6,660.

“This was like a light in a dark, dark year,” Stearns said. “This really brought me hope, and just to see how great our community is in such a difficult time.”

“Liz did very well for us,” Schwartz said. “There are many kids around here, and I do day care … so we’re super thankful she pursued this.”

With the donations raised by Stearns and Schwartz, JC Women’s Park is due to receive a $23,397 upgrade to its playground equipment later this summer or in early fall. And while it was more work than Stearns expected, she said it was well worth it to finally have new equipment going into “our park.”

“The reason for some of the great improvements we’ve had is because of community support or groups that want to help recreate or improve our parks,” Neumann said. “A lot of these projects we couldn’t do without the support of community or individual groups like this.”