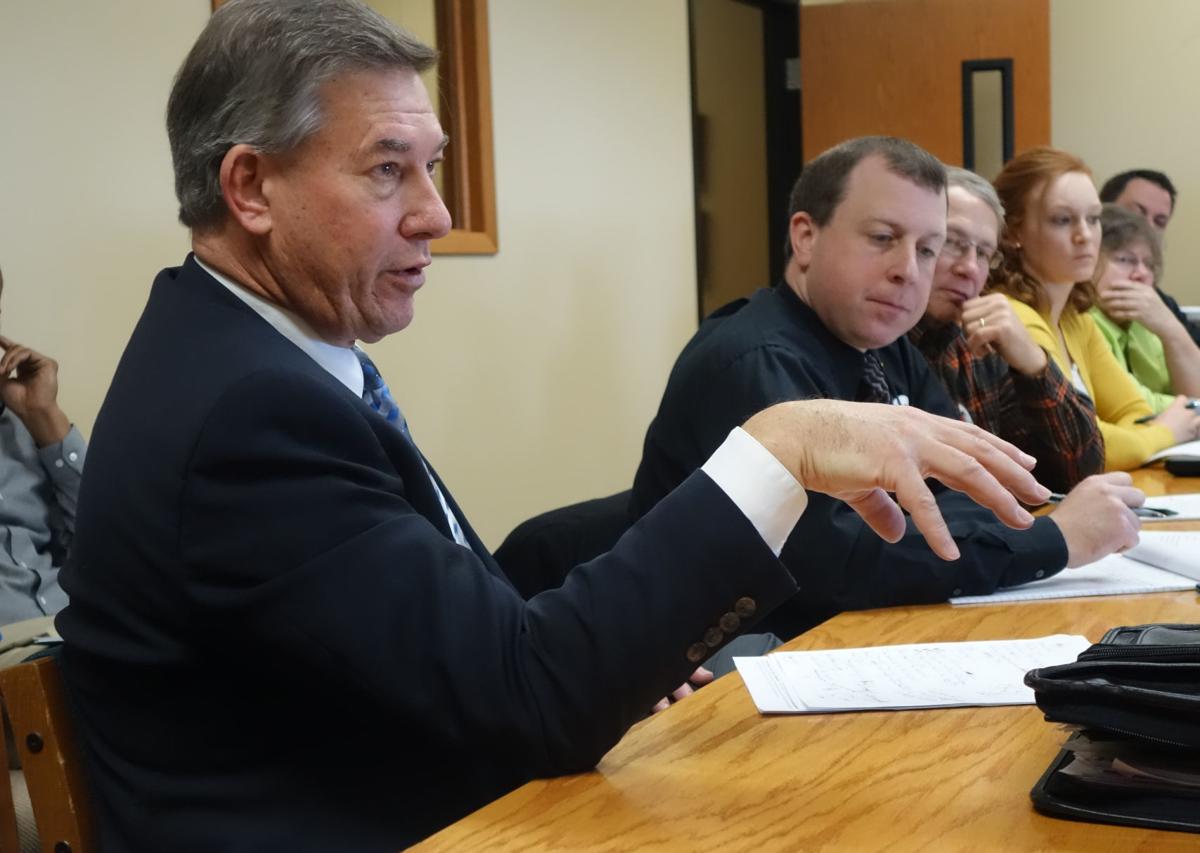 A Tuesday morning meeting about school safety may result in more collaboration.

“I was overwhelmed by thoughts of the tragedy in Florida and the many school tragedies that preceded that event,” said David Conrad, executive director of Hutchinson's New Discoveries Montessori Academy, speaking of the Feb. 15 shooting in Parkland.

“I felt compelled in that moment to reach out to the mental health providers we have collaborated with to invite them to have a conversation about what we are and aren’t doing to meet the ever-growing mental health needs represented by the children and families we serve,” he said.

The more Conrad thought about it, the more he realized that churches, social services, law enforcement and others should be part of the conversation as well. Ultimately, he formulated four questions, or talking points, scheduled a meeting date of Feb. 27 at his school and sent out an invite.

Some 22 participants filled the NDMA school conference room, including law enforcement, pastors, education and mental health professionals and others.

“I can’t tell you the number of families that either stopped in or called to ask, 'What are you doing about school safety?'” Conrad said at the start of the meeting. “The good news is we feel we have some measures in place to address school safety.”

The four questions discussed were:

“If there was something in common with all school shooters it may be mental health,” Conrad said. “So how are we addressing it?”

Some of what is being done for mental health issues includes a partnership between SteppingStone Therapeutic with McLeod Alliance for Victims of Domestic Violence to form a trauma group for ages 9 to 12.

“We mainly service youth, but have opened it up to families because we know youth don’t come to us on an island, they come on a family,” said Mary Anderson of SteppingStone Therapeutic. “Our trauma group is very successful because they see peers who have been where they have been and they don’t feel so alone.”

Since NDMA no longer shares space with New Century, Conrad says there is a suite of offices now available for students that receive mental health services during the day at school. Staff from Greater Minnesota will start on site full-time this week.

Anderson said McLeod Alliance and Public Health work to make connections and relationships with families. A parenting class currently has 10 participants with 32 children or grandchildren being raised represented.

“Parents come wanting to learn how to discipline,” she said. “One of the first thing we say is we are not here to fix your kids, we’re here to give you the tools that will help your children.”

Youth for Christ has its Hutchinson Area Youth network in grades six to 12, collaborating with area churches. Jim Rogers of Crow River Youth for Christ said a big concern is the widespread use of chemicals.

Conrad said NDMA contracts for the services of a registered nurse through McLeod County.

“The preventative piece of her role is significant,” he said. “She connects with programs and services we are not always aware of and the collaboration opens doors.”

Conrad says only the front door is unlocked at New Discoveries. Classroom doors are locked all the time. Magnets are used to lock the doors in a lockdown situation. The school has gone from having no lockdown drills to five.

New Century Academy is putting a surveillance security system in every room. Becker says police would be able to see a live feed in any room at any time. A lock system is in place where everyone has to buzz in. The last step being researched is how to teach staff and older students how to intervene.

Michael Scott, director of teaching and learning for Hutchinson Public Schools, said the district had new secure entrances installed over the summer. Teachers wearing badges sign people in and out. He said building community relationships is at the core of safety, along with being proactive in getting students involved in something. Plus there has been a lot of awareness training.

“Columbine really changed the law enforcement world,” Hatten said. “We do regular training with our officers and try to get into the school facilities to train the best we can. We review emergency plans to see how they mesh with our response. We have expanded our efforts to include church and business places.”

The McLeod County Sheriff's Office provides a DARE officer to every school in the county, a level of outreach that is said to be unheard of elsewhere.

“I have had too many kids ask if the police are good or bad,” Anderson said. “Because they get their house raided or parents are taken away for something they did wrong. These police outreach programs showing them the other side is so important.”

Kevin Mathews said McLeod County Emergency Management, which he directs, is more consequence oriented. If something bad happens they help manage and prevent it.

“We are taking active shooter response training and working on curriculum for churches,” he said. “We train with munitions at Camp Ripley using paint balls. We are training with businesses and churches so we are better prepared when an emergency happens.”

WHAT ARE WE MISSING?

The most passionate and lengthy comments came concerning the question of “What are we missing?”

“I would like to see our rural providers have more space to bring in people that maybe don’t have the degrees, but could get the training,” he said. “Now, we need the appropriate credentials in order to receive funding for employees.”

Gladys Nissen, a youth worker with Faith Lutheran Church, feels we are missing a sense of security. She said kids are scared to go to school.

“Any time we have a concern, it’s best to meet it head-on and don’t ignore it,” said Jason Becker, New Century Academy director. “ There is a trust deficit that exists in our kids with adults, teachers, administrators and police. We need to approach it the right way, showing we are concerned.”

Because of privacy laws in regard to juveniles, Hatten said it is difficult to work with other agencies.

“In Parkland there were many people that knew there was something wrong,” Hatten said. “But they couldn’t share with one another to get a complete picture, and it looked like they failed miserably. What the public (doesn't) know is we have this big privacy hurdle. Where is the line between privacy and public safety?”

Pastor Tim Vanden Langenberg said, “We have to be able to know that something will happen when we call in a mandated report. I have felt that the county has been so overwhelmed. I have been told it has to be blatant or they can’t do anything.”

Anderson said she had to make 12 child protection reports in three months to get anything done.

Sprynczynatyk said this was disturbing, adding that even within his own units they can’t tell each other things. There are efforts to change the legislative statutes to make sharing easier.

The mental health caseload is increasing, he said, including more out of home placements than ever before..

The Rev. Michael Jones, pastor at the Seventh-day Adventist Church in Hutchinson, said there are not enough foster parents available in the county and the state. Anderson said mentorship programs for both children and parents are missing

Conrad would like the city to roll out the red carpet and welcome a child mental health hospital unit, such as the 60-bed facility proposed in Forest Lake. He said there is a serious deficit in mental health beds in the county.

“We are missing the spiritual aspect of the person,” Vanden Langenberg said. “We say it is a mental health issue, but I want to say we have ignored the spirit part of the body. We need to start saying that this is a huge part of the human condition.”

“The kids are starving for love and safety,” Jim Rogers of Crow River Youth for Christ said.