Road maintenance, or lack thereof, is a common complaint among Hutchinson residents. To here some tell it, Hutchinson’s 90.8 miles of roadway — about 13.3 miles of which are state or federal roads — are falling apart. According to the city's own Pavement Condition Index, however, that is not the case.

PCI is based on a 100-point scale (100 is a brand new street with no distress, while 0 is a fully deteriorated street). The city has used this system since 1996. Every three years, the index is determined by a city employee who walks more than 80 percent of Hutchinson’s streets and conducts a physical survey that identifies and catalogs pavement distresses.

On years between physical surveys, a standard decay curve is used to estimate the condition of roads. The purpose of the system is to help city staff and the council make the best use of Hutchinson’s money by showing them when it is more economical to schedule certain streets for projects. Those projects get scheduled into the five-year Capital Improvement Plan city leaders update each year.

“It’s a good document to show the public that we’re aware of the streets, we’ve got a plan to approach it, and we follow up and follow through on those plans," City Administrator Matt Jaunich said during a City Council meeting back in November. "There’s always that debate of, 'Can we do more?' And that’s when the council comes in.” 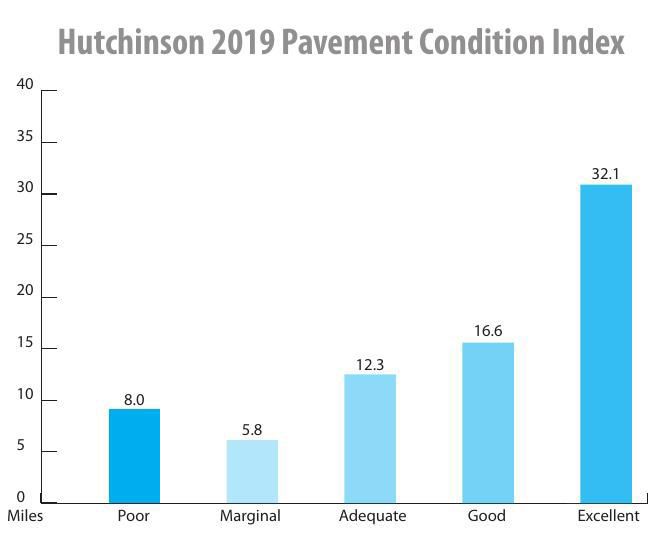 “I am anticipating we will see a significant increase in our average PCI,” he said. “The reason I say that is, if we look historically back at what we’ve projected and what we’ve actually come in to, the roads that we’ve sealed and seal coated tend to do better than what the decay curves are.”

As one might expect, the options to repair streets back to good shape become more expensive the more a street deteriorates. Catching problems early can spare city taxpayers a bigger bill later. For example, a simple life-extending seal coating costs about $1.85 per square yard. Another minimal project, a mill and overlay — grinding off the top two inches of paving and resurfacing with new material — costs only about $13.50 per yard.

Over the past five years, the city has addressed 708,787 square yards of paving, or about 9.3 percent of its rated street network. About 78 percent of that was handled with the least expensive options of seal coating or application of a sealant. That work is expected to cost about $740,187 annually in the next five years.

The other 22 percent of street projects involved partial reconstruction, full-depth reclamation or overlay of new pavement over old. New construction was less about 1 percent. Together, that type of work will cost an estimated $2.9 million per year in each of the next five years. Assessments to owners of property adjoining those streets are anticipated to cover about 16.5 percent of the cost, according to Olson’s report.

“One thing we did notice in the report itself, and in the data in particular, was movement toward more patching and maintenance overlay, and some mill and overlay type projects rising to the top,” Olson said. “I think what that is indicative of is that we’ve done seal coating on a regular basis for many years. … So we are at a point now, and the system is recognizing it, that some of the roads we need to work on are in a little poorer condition.”

Hutchinson Public Works strives to maintain an average Pavement Condition Index of 65-75. According to a survey of other communities, the average target PCI is 70. Here are past systemwide PCI ratings for Hutchinson: